A Weekend in Belgium: Ghent

A Quick Stopover in Ghent

To get from Bruges to Ghent, it’s as easy as a 15-20 minute ride on one of Belgium’s excellent fast trains. Although we only had a day to get from Bruges to Brussels, and hopefully spend some time exploring Ghent, we took a slow train so we could also see the country-side and small towns along the way.

Ghent is much larger than Bruges and is home to around 250k people, including 50k students. It is immediately apparent that it is a University town as there are young people everywhere, especially compared to Bruges where all we saw were foreign tourists. The fact Ghent is a student city was also obvious from all of the bicycles on display around town!

From Ghent’s main train station, we followed the ‘Centruum’ signs to the #1 tram which takes you from Sint-Pietersstation into Korenmarkt, the historical city center. The city center in Ghent seemed more dense than that of Bruges, making it very nice to walk around, even in the cold. Many of the buildings are more modern than those in Bruges, but the city center itself was still old and beautiful. It was obvious there were less tourists in Ghent than in Bruges, and restaurants appeared to be more reasonable and less marketed towards tourists than in Bruges. 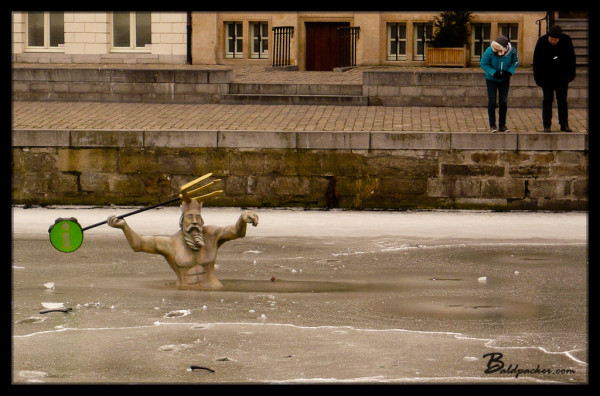 Even the Sculptures were Frozen!

The architecture of the Belfort en Lakenhalle (Belfry and Cloth Hall) was reminiscent of the Belfry in Bruges, but at 91 meters, it is even taller than Bruges’ famous tower.  Construction of the Belfry of Ghent began in 1313 but was not completed until 1380. On top of the tower is a gilded dragon which was brought to Ghent from Bruges.

We spent a few hours walking around Ghent just absorbing and enjoying the scenery and atmosphere. We also wandered through a beautiful church called Sint-Baafskathedraal (St. Bavo’s Cathedral) which housed beautiful stained glass windows, impressive brick ceilings, and  your usual array of artwork and sculptures. 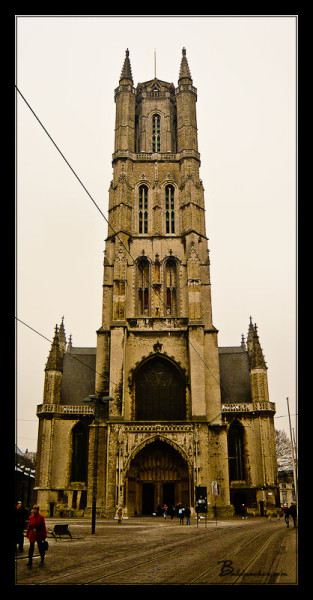 Unfortunately, since it was February, we were soon very cold from the sub-zero wet weather but decided it was the perfect time to eat. We found a cute cafe run by a local couple in one of the major squares. We had hoped to try traditional Flemish meat stew, called Stoofvlees, but were unable to find it on the menu. Luckily, the couple could recommend other typical local fare from the menu and we were treated with delicious meals that had a home-cooked feel.

After lunch, we finally sampled one of Belgium’s most prized dessert treats – the infamous Belgian waffle. The waffle shop we found offered the waffles both plain and covered with chocolate so Clarissa and I tried one of each variety. I don’t have a big sweet tooth so I preferred the plain waffle, but both were delicious, especially served hot and fresh off the grill on a cold day.

Although our visit to Ghent was very short, I suspect Ghent would be a fun town to spend a few days. Normally, university cities are filled with fun, trendy, and affordable bars and restaurants and given what we saw in our few short hours visiting, Ghent would offer lots of great student-oriented entertainment. Unfortunately, since it was quite cold out and we still had to make our way on to Brussels, we had to catch our train after only a few hours, but I am still happy we had time to see Ghent’s old town and eat a traditional lunch in a less touristy place. 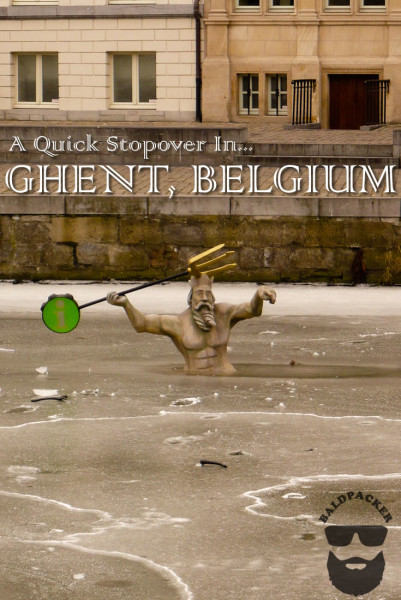 ← A Weekend in Belgium: One Day in Bruges
Brussels Beer Bars = Fun in Belgium! →

1 Comments on “A Weekend in Belgium: Ghent”