We began our Great Ocean Road adventure in Melbourne, where we had booked a rental car from Melbourne to Adelaide for six days through rentalcars.com. I am sometimes weary of booking rental cars through online third party agencies, but was very happy when I found out that our rental was being provided by Thrifty’s. We took the train to Thrifty’s downtown Melbourne rental agency, stocked up on groceries, and began our Great Ocean Road Trip. 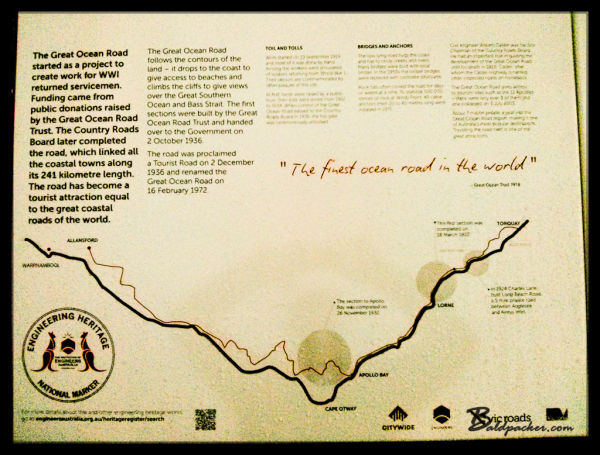 Our first stop was in Geelong, where I had planned to meet my friend Samantha for lunch. Unfortunately, we did not get away from Melbourne until the early afternoon so our lunch was actually an afternoon tapas snack. We met at The Edge restaurant which is nicely situated along Geelong’s waterfront. Since it was already 3pm only ‘tapas’ were available so Sara and I shared a wonderful goji berry salad, octopus in chili sauce, and nachos. The snacks were filling and it was great to catch up with Sam but at 4:30pm we realized that there was very little daylight left and that we had to say our good-byes. 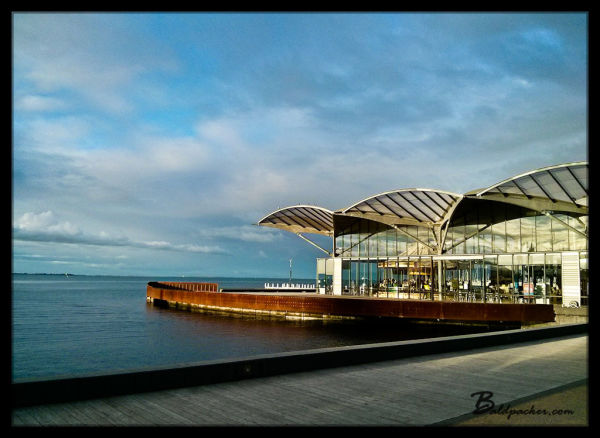 Geelong looks like a wonderful city and I wish we had more time to explore. Unfortunately, given it was winter the sun set around 5:45pm and we still had a couple hours to drive to Apollo Bay where we were staying that night. The Great Ocean Road from Geelong to Apollo Bay is likely amazing during the day, but it felt absolutely treacherous in the dark. The road is very twisty and narrow and was completely dark. I was disappointed that we could not take in what I am sure are incredible views from the highway, but we still took our time given how many accidents I’m sure take place on the Great Ocean Road at night.

When we finally arrived at Apollo Bay we were greeted by Robyn, a very friendly older woman who looks after the Surfside Backpackers.  I imagine that Surfside Backpackers is a marvelous place to be in the summer and I loved the layout of the place. There were two nice kitchen and living areas and our double room came complete with an electric heater and electric blankets on the bed – perfect for the cold July nights.

For our second day on the Great Ocean Road, we set out by 9am to try and make the most of daylight. Our first stop was the Cape Otway Lighthouse, which is approximately 12kms down a side road off the Great Ocean Road. On our way to the Lighthouse, we were lucky enough to see two Koala Bears sleeping in the trees. I have always wanted to see wild Koala Bears and was thrilled enough to pull off the road for photographs. The Koala Bears were bigger than I expected and just as cute as they are portrayed in cartoons sleeping in the trees. 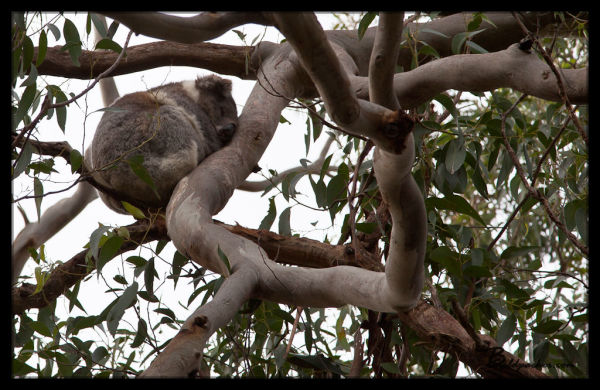 Sleeping Koala in the Wild

When we arrived at the Cape Otway Lighthouse parking area we followed the Great Ocean Walk signs for a short walk to see the lighthouse. Unfortunately, the trail heads inland and the view was quite disappointing. We continued around a loop to the Cape Otway Lighthouse office where we were surprised to find that they were charging $19.50 per Adult to access their ground. Apparently you can see the lighthouse, a WWII bunker, and old telegraph station, but neither of us thought this was worth $40! Had we not seen the Koala Bears on the way to the Lighthouse, I would have been sorely disappointed in the detour to the lighthouse.

Our next stop was Moonlight Head and Wreck Beach where we were able to hike part of the Great Ocean Walk down from the Moonlight Head viewpoint to the Wreck Beach walk. The viewpoint from Moonlight Head was good, but not as spectacular as those available from those that we had further along the coast. Although the walk down to Wreck Beach was beautiful, the beach walk can only be done during low tide and unfortunately our timing only allowed us to walk a short portion of the beach. They are both worthwhile stops if you have time, but otherwise it is worth continuing on to the 12 Apostles area in my opinion. 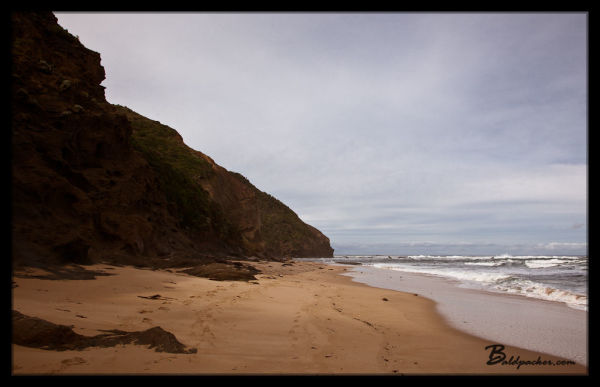 We drove on to our next stop, Gibsons Steps, which provided an 86 step climb down the 70-meter high cliffs to view two enormous rock stacks named Gog and MaGog. There were very few people around which made it a beautiful spot to take photographs, but the tide was still high so once again our beach access was somewhat limited. 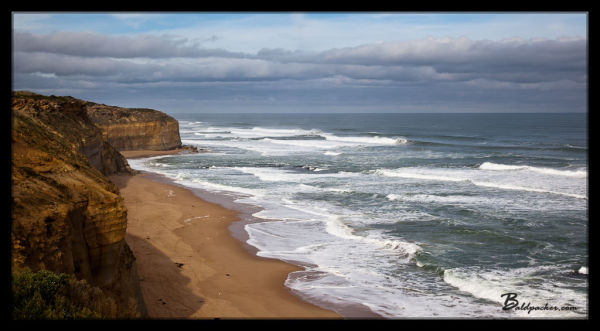 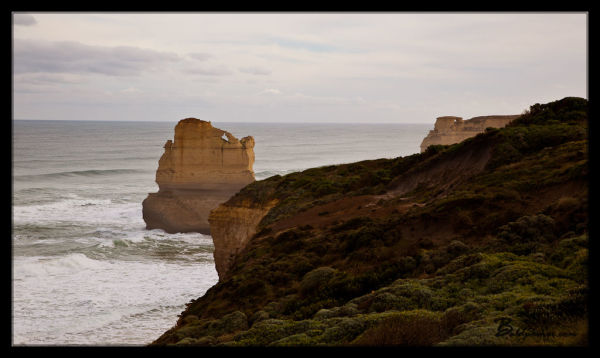 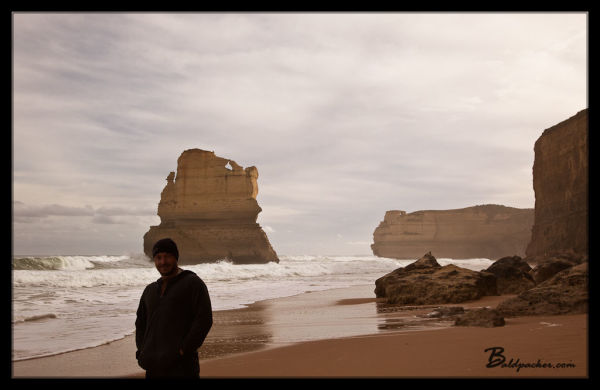 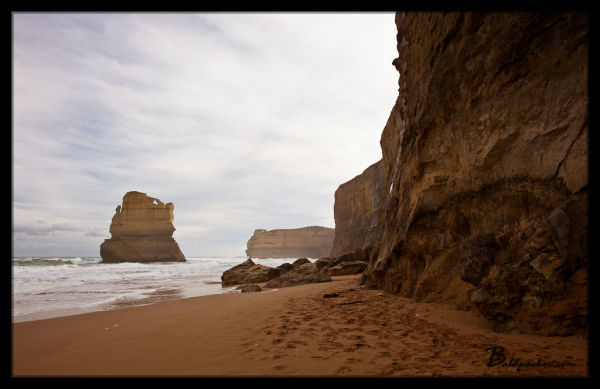 The next stop on our Great Ocean Road trip is also probably the most well known: the 12 Apostles. Although there are only nine “Apostles” the views are incredibly dramatic and beautiful. The Apostles are limestone cliffs that were eroded away to form caves which eventually collapsed to form rock pillars up to 45 meters high. Unfortunately, with fame come crowds and the 12 Apostles area was bustling with tourists. We watched as three helicopters shuttled tourists on flights above the area and had to push our way through the crowds lining the boardwalk. Despite the number of people, the 12 Apostles are a must-stop site on the Great Ocean Road and I was happy to finally see an area I had previously heard a lot about. There is a large tourist information center complete with a cafeteria so I also used the stop as an opportunity to pick up a strong coffee to boost my energy for the rest of the day. 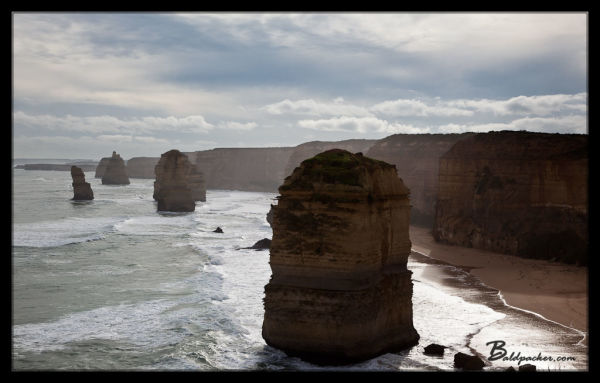 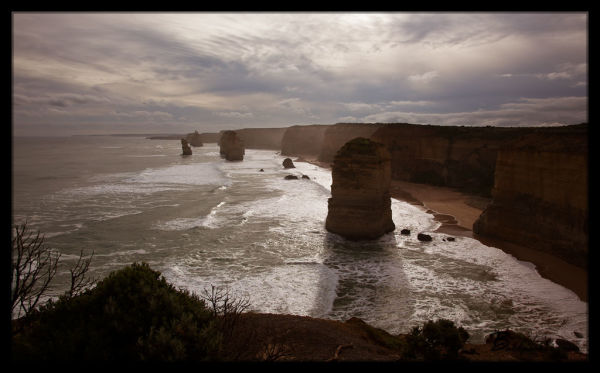 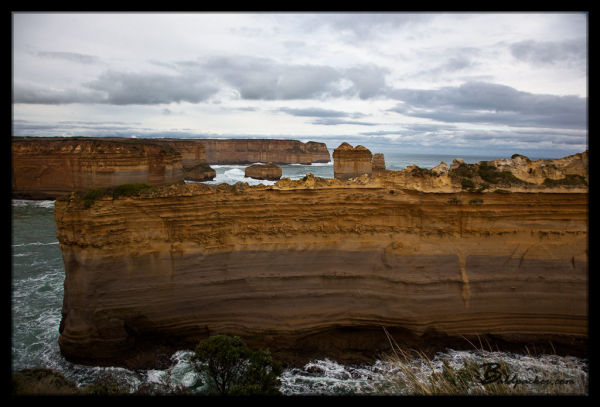 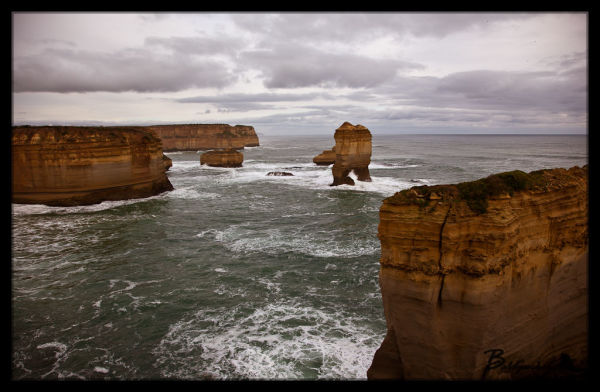 Although Gibsons Steps and the 12 Apostles provide amazing views of the Great Ocean Road’s limestone cliffs and rock stacks, Sara and I stopped a number of other viewpoints which each provided their own unique landscapes. Our first stop was the Loch Ard Gorge followed by The Arch and London Bridge which were just past Port Campbell where we were staying. As the sun was beginning to set, we spent nearly half an hour at London Bridge watching the colours change before requiring the warmth of our car. 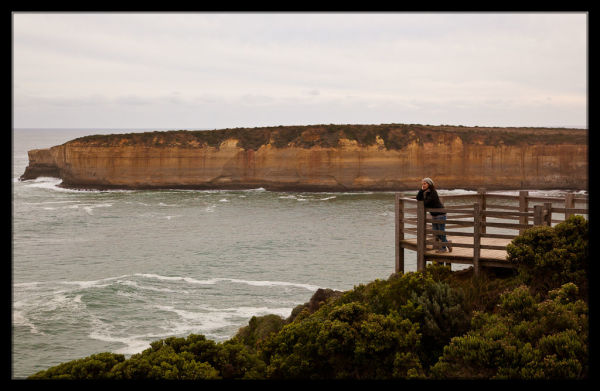 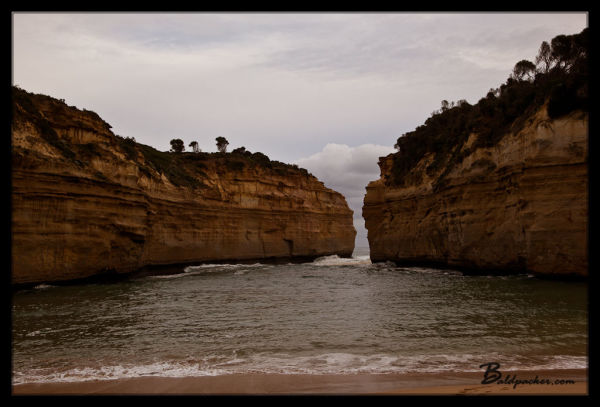 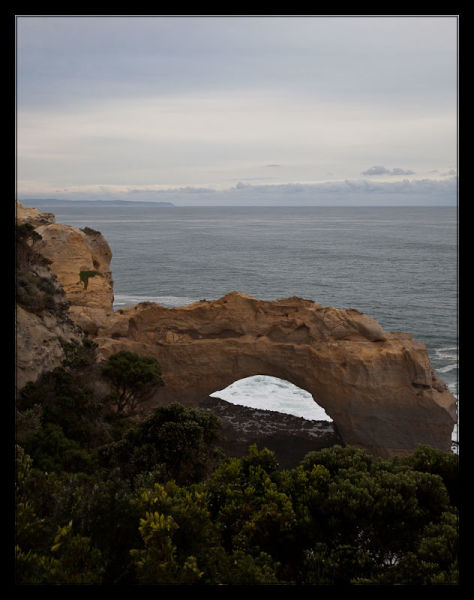 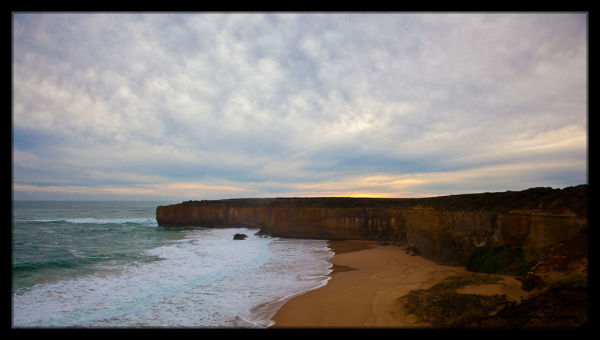 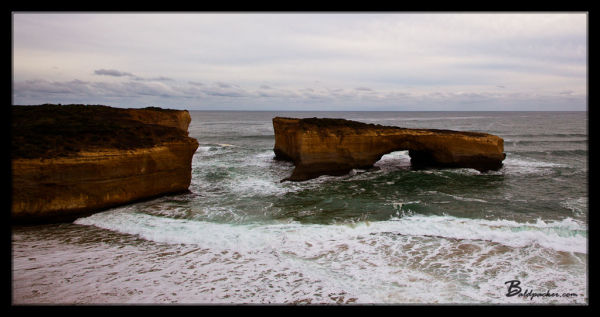 Since the sun had not yet completely set, I drove us along a rural road in search of even better sunset views. Although we could not find an ideal sunset viewpoint, we did see a large number of wild kangaroos who began jumping along the highway beside our car. Although I had seen a wild kangaroo during our time in the Northern Territory, I was thrilled that we came across more just off the Great Ocean Road. Given that it was dusk, I was also reminded me of the constant warnings about kangaroos on the roads at dawn and dusk and made sure I was extra attentive for the rest of that evening’s drive.

When we returned to Port Campbell we checked into the Port Campbell Hostel. Our double room cost $65 for the night and we were generally very happy with the facilities. The hostel seemed to be very new and clean and was quite large given how small the town is. I believe it is targets large tour groups more than backpackers but I would highly recommend the place to others. The only strange thing was that the toilets and shower stalls were all basically in the hallway for the rooms so there was very little privacy and we could hear the sounds of showers and flushing toilets in our room. Not sure who designed the place but I would have given them great scores on every aspect except for the very public toilets!

Sara and I walked the block around the hostel, which is essentially the town of Port Campbell, and bought sausages and wine at the grocery store for our pasta dinner. The cost of beer in Australia is extraordinarily high which is made even worse by the fact the majority of beers available are tasteless Pale Ales and Lagers. For example, 330ml bottles were ~$4 each, while bottles of Australian wine can be had for as little as $7. I do love a cold beer after a day of driving but for the price I was very happy to have a bottle of local Cabernet Sauvignon with dinner instead. It is amazing how expensive beer and spirits are in Australia when wine is so inexpensive.

The next morning we were able to drive past the Loch Ard Gorge and London Bridge to the next popular tourist stop, which is the Grotto. The Grotto is a beautiful spot and the name suits the landscape well. We also made a final stop at the Bay of Islands, where the wind was as intense as the scenery! 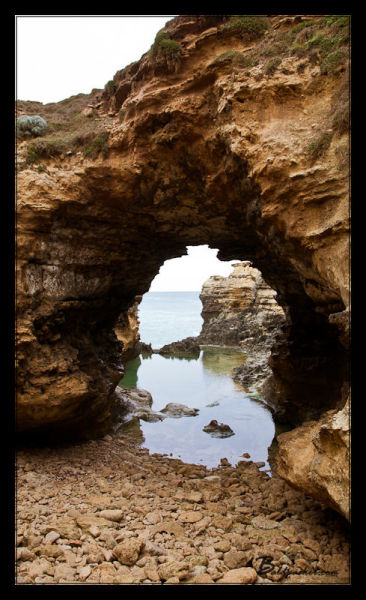 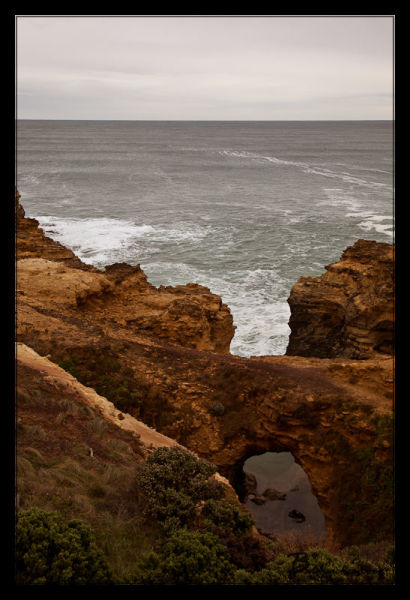 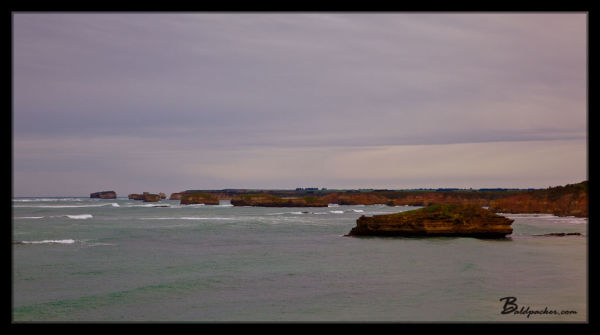 Windy Stop at Bay of Islands

At this point our Great Ocean Road Trip was essentially complete as our plan was to drive North from the coast towards Halls Gap and the Grampian Mountains. I thoroughly enjoyed the drive and the scenery but expect it would have been even more incredible in the summer. I suspect we missed some scenery between Geelong and Apollo Bay due to the early nightfall, but I’ll never forget the white-knuckled drive on those twisty roads.