Isle of Skye to Inverness Drive

We drove from Oban to Portree, on the Isle of Skye, and my parents dropped me off at the Portree Independent Hostel. Perhaps I had just grown used to the niceties of bed and breakfasts, but I found the Portree Independent hostel to be very basic and my room had a terrible sweaty sock odor to it. I quickly learned that the hostel was not really a travel backpacker’s hostel but rather served as accommodation for hiking backpackers who were returning to their first showers after days of trekking. The many wet clothes, boots, and sleeping bags that were hung out across the bunks to dry were clearly to blame for the room’s odor, but such is life while budget traveling.

Scenery on the Drive to Isle of Skye 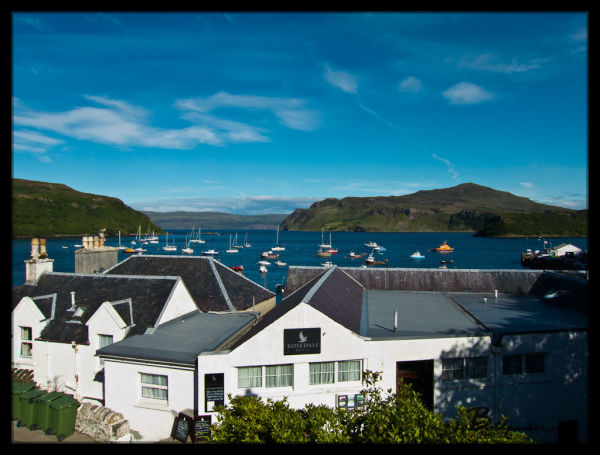 I was unable to find many travelers at the hostel to socialize with (most were groups or families), nor free wifi, so I soon found myself at the Royal Hotel for nachos, beer, and wifi access. After clearing up my e-mail inbox, I overheard a Scottish couple working out a crossword together. I offered to help and quickly helped them fill in a number of blanks. The Scottish are some of the most hospitable people around and I soon found myself enjoying conversation with the couple as well as a local musician who was playing at The Isles Inn bar that evening. The couple invited me to join them at the Isles Inn later on to enjoy the live music, and when I arrived the place was absolutely packed with diners and drinkers enjoying the music. We eventually found ourselves a table and in between music performances the couple told me they worked at the Glenhaven Golf Course together. The wife managed a Johnnie Walker promotion where course members have personal bottles of Johnnie Walker Blue, with their names on them, stored at the club house for after the round. Each table apparently has a special cut-out that fits the JW Blue bottles perfectly which sounds like both an excellent promotion and a great way to enjoy the 19th hole! After a few pints and a lot of great music, the couple was ready to go, I was ready to tolerate the scent of my hostel dorm, and it was time to wander back to bed.

I met my parents the next morning and we set out on what may be considered the Isle of Skye’s Northern route. The first stop was the Museum of Island Life. I am not sure if the museum is really worth the stop or admission, but they had a lot of interesting antiques on display and it was good to see the construction techniques historically used in the area. 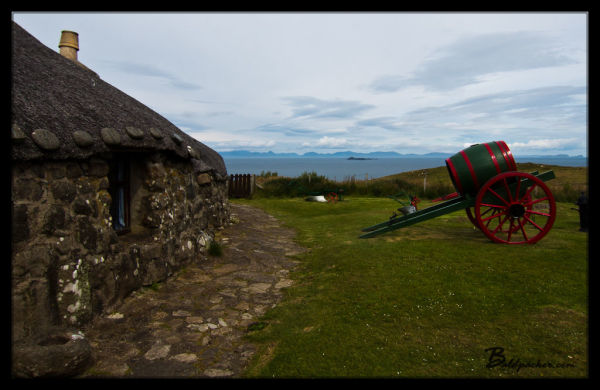 We also stopped at Duntulm Castle, which is essentially just the ruins of what had been Duntulm Castle, set in a beautiful location overlooking the see and a nearby island. The Duntulm Castle was built in the 14th and 15th centuries when the MacDonald and MacLeod clans were feuding. It was then abandoned in 1732, and many of the stones from the Duntulm Castle were pillaged for the construction of nearby buildings.

The highlight of the day for me was certainly the Kilted Rocks, an inspiring cliff face set on the ocean. It is a great area to walk around and the views are fantastic everywhere one looks. 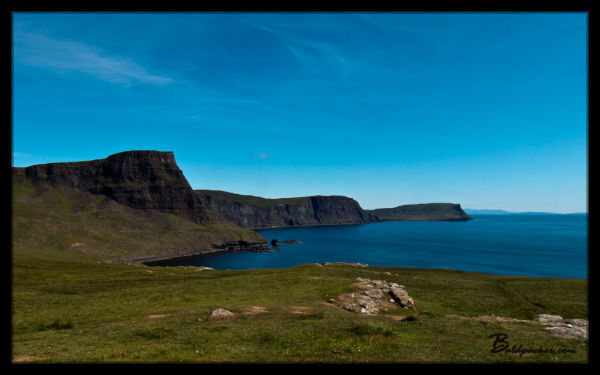 After we returned to Portree we went for dinner at Marmalade, a great restaurant with a beautiful patio area. That evening, I met a young girl from my hometown of Calgary who had just returned from hiking the West Highland Way. She really impressed me as a person as, at only 18 years of age, she decided to set out and hike the 96 mile trail on her own. It is very rare to meet someone in their twenties or thirties with that kind of adventurous spirit and I was proud that such a cool young traveler came from my hometown!

The next day we set out on what may be called the Isle of Skye’s Western route. Conveniently, the first stop we made was at the Talisker distillery. The Talisker distillery produces much more whisky than the Oban distillery, so although the tours were similar, I observed substantial differences in the scale and tour style of the two distilleries. My Mom joined me for the tour and I think she enjoyed it more than she expected. The Isles are known for their smokey whiskies and the Talisker distillery tour provided an excellent demonstration of how this flavour is obtained. The key is in the peat, a fuel obtained from wetlands such as marshes and bogs and historically used for fires in regions where wood is not commonly available. Once dried, the peat is burned to dry malted barley and the peaty (smoky) flavour from the smoke is imparted on the whisky. After kick-starting our morning with a dram, we continued on to Dunvegan Castle. 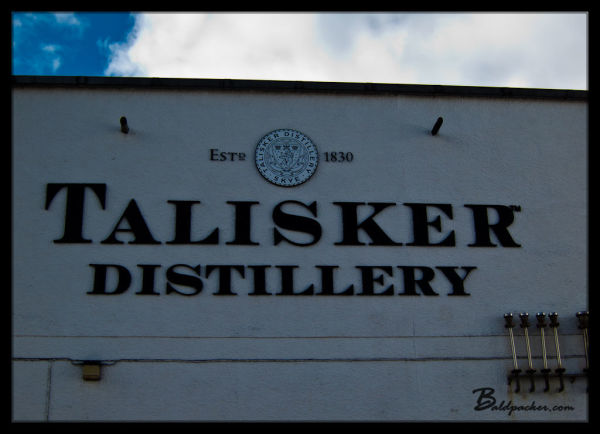 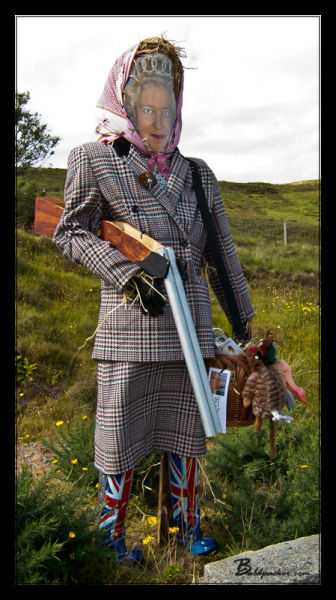 The Dunvegan Castle was constructed in the 14th century and has been continuously inhabited by the McLeod clan for 800 years, making it the oldest continuously inhabited castle in Scotland! Although the castle is very impressive in itself, the surrounding area and gardens are what made it a memorable sight for me. The location is phenomenal and there were beautiful views and lush nature everywhere I looked

My father is an avid fossil collector and Scotland is known for the quality and preservation of its fossils. He had learned of a “Dinosaur Museum” on the Isle of Skye so we made a stop there to view the collections. There were some very impressive fossils on display and the curator was a nice man who ran the museum as a hobby. The curator told us of a nearby location where we could try our luck in finding Scottish fossils and we set out to find it. It was a tough hike down to the slopes where the formations were, but with a little effort we made it and then spent an hour poking around the slopes. Even though we did not find much, it was nice to get out fossil hunting with my Dad again (fossil collecting is something we routinely did in Canada before I moved overseas). 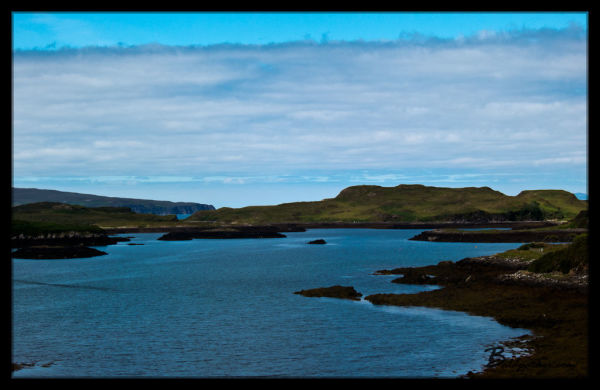 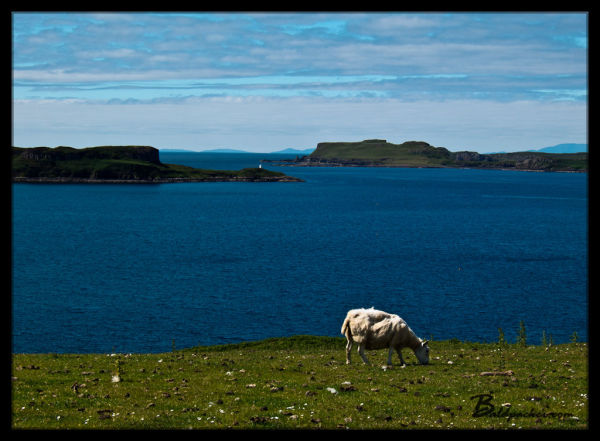 As the rain clouds set in we retreated to the Audi rental car and drove back to Portree where the sun was still shining. We went for an early dinner at Marmalade and enjoyed a pint at the picnic tables in their beautiful courtyard before moving inside to eat.

The next day, we drove from Portree to Inverness, stopping at a couple of castles along the way. The first castle was Eilean Donan Castle, one of my favourite castles of the trip. It is just like the sand castles I built as a kid, complete with a bridge and moat (actually an island where three lochs meet). Eilean Donan was founded in the 13th century and was a stronghold of Clan Mackenzie. Eilean Donan is now somewhat of a Scottish icon and photos of it regularly appear on Scottish packaging and advertisements. For James Bond fans, it may be recognizable as the Scottish Headquarters for MI6 in The World is Not Enough. 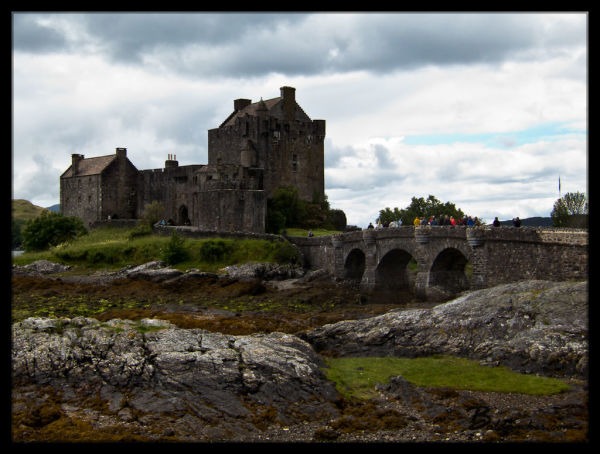 The next castle, Urquhart Castle, was next to Loch Ness closer to Inverness. We were hoping we’d get nice scenery driving along Loch Ness but sadly, trees obscured most views along the highway. Urquhart castle is one of Scotland’s largest and is still impressive, despite mostly being ruins. The castle played a strong role in Scotland’s struggle for independence and came under control of Robert the Bruce in the 14th Century. 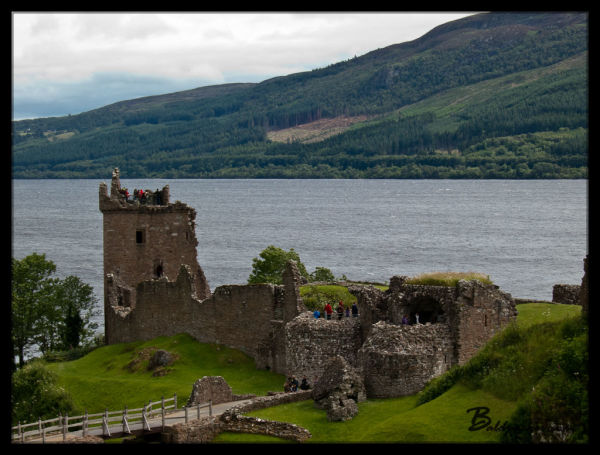 Upon arriving in Inverness, we checked in at the Craigside Lodge, a wonderful B&B run by an Olympic curler, Ewan McDonald, and his wife. Being Canadian, I have watched a fair amount of curling in my day and it was neat to see the photos of Ewan’s championship team displayed in the house, even though I knew that several of his medals had been won by beating Team Canada! That evening, we walked down The Castle Tavern in Inverness to have a beer, watch the British Open final, and try their Sunday Roast special. I quite enjoyed the Tavern as they served a variety of local craft beers, including some very nice dark ales. The British Open also proved to be very exciting as Ernie Els staged a huge comeback to win the tournament. Conveniently, The Castle Tavern had selected my favourite whisky, Laphroaig, as their daily special and I ordered a dram to celebrate my last evening in Scotland and a wonderful road trip with my parents. I also made a quick walk to the Inverness Castle for a photo before sunset.

The next morning my parents dropped me at the Inverness airport where I had booked a cheap Flybe flight to Belfast. I managed to condense my backpack to meet Flybe’s strict carry-on allowance and, after a long wait in the small airport, was on to the next leg of my journey.

Overall, Scotland was a wonderful travel experience. The people (and their accents) are fantastic, the history is unbelievable, and the scenery is spectacular. Although it is difficult to plan for sunshine, I hope to return to Scotland again to hike the West Highland Way, play golf, tour whisky distilleries, and possibly even work in Aberdeen’s lively energy sector.

2 Comments on “Isle of Skye to Inverness Drive”