A May Summer Day in Canillo, Andorra 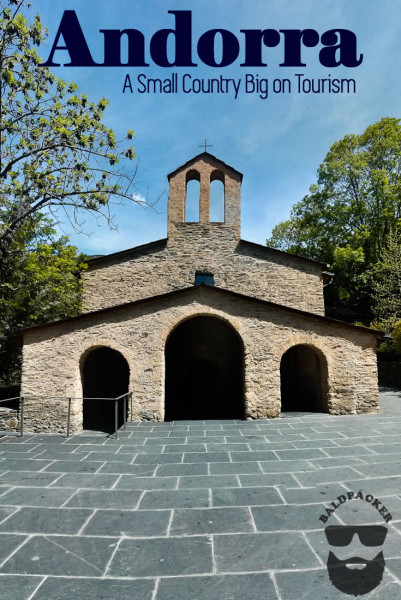 Why I Wanted to Visit Andorra

After spending a month in the French Riviera, it was time for me to make a day trip to Andorra.

Andorra has interested me for a long time and I even researched becoming a resident for the mountains, skiing, and tax haven status. Unfortunately, the EU pressured Andorra into implementing an income tax and I no longer think residency in Andorra is worthwhile.

Andorra is a landlocked microstate in the Pyrenees mountains between Spain and France. Even though Andorra is only 468 km² (181 mi²) it is the largest microstate in Europe. That means it is larger than Liechtenstein, Malta, Monaco, San Marino, and Vatican City. For comparison, the country is still only approximately half the size of my home city of Calgary, Canada,

Other interesting facts about Andorra include:

My travel plan was to fly from Nice to Toulouse and then catch a bus from Toulouse to Canillo. I booked two nights at a hotel near Canillo and planned to explore the region by foot for two days. To get out, I would catch another bus to Barcelona for an onward flight.

Unfortunately, this plan was completely ruined when EasyJet delayed my flight from Nice to Toulouse by six hours! I had to spend an extra 60€ for an airport hotel in Toulouse but thankfully Novatel was good enough to re-schedule my bus for free.

At least I could enjoy the bus ride through Andorra’s beautiful mountains during the day rather than at night. 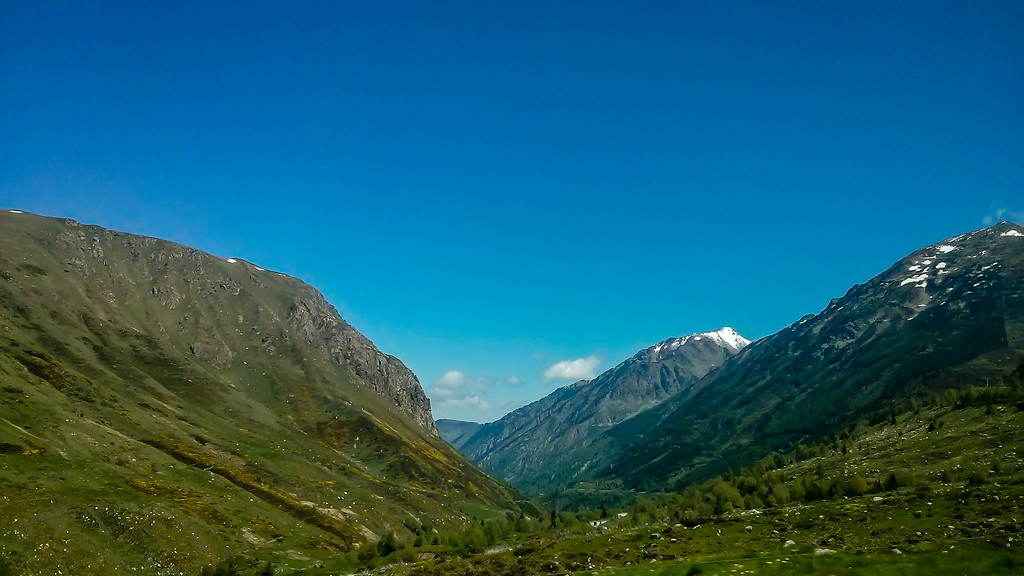 Views on Drive from Toulouse to Andorra

Prior to arrival, I booked a room at Hotel l’Ermita, in the village of Meritxell, for only 30€/night. Although Meritxell is outside of Canillo, the value could not be beat and the price even included breakfast. Since it was low season, I think I may have been the only guest! 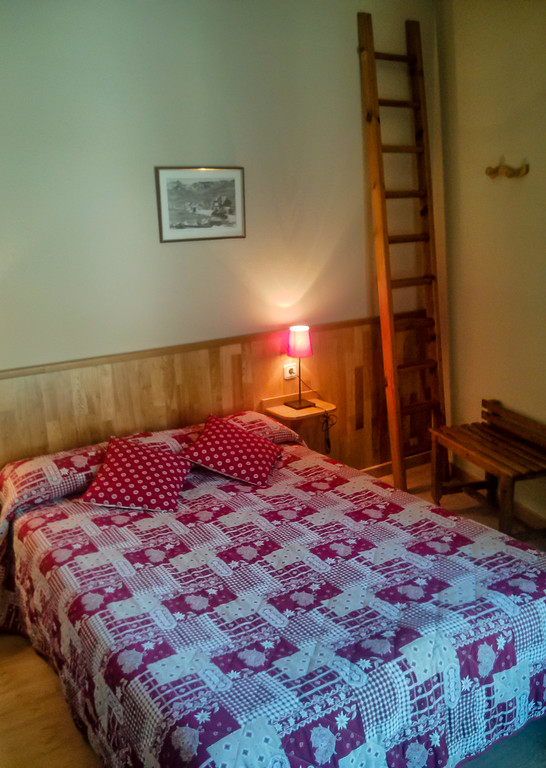 My Room in Hotel L’Ermita

Since I only had one day in Andorra, instead of two, I immediately went hiking. I found a nice walk from Meritxell to Canillo via the village of Prats on the Cami Ral. Andorra is very Roman Catholic and along the route were many stone crosses and old churches.

The Cross of Seven Arms is one of Canillo’s most beautiful and famous crosses and subject to a tragic legend. The legend holds a boy accidentally shot one of his friends, who was playing a practical joke, thinking that his friend was the devil. 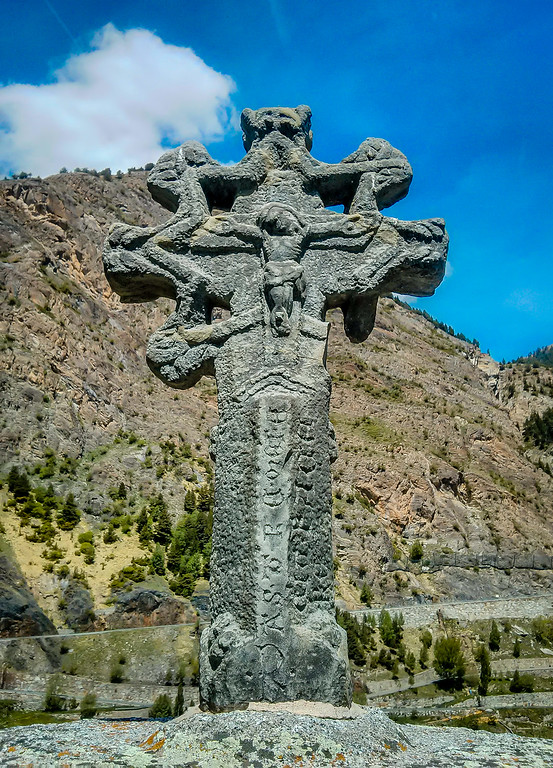 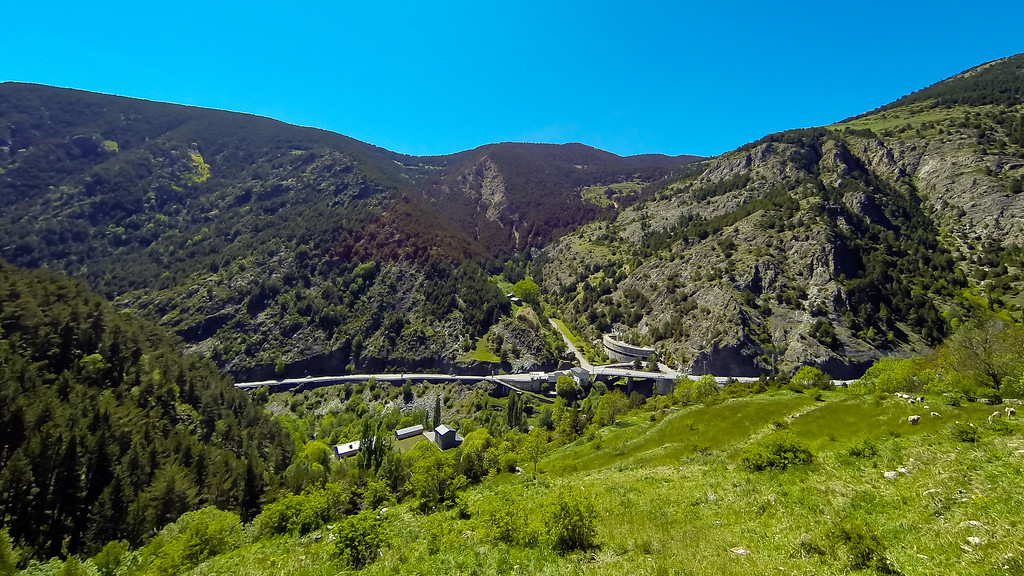 View from Cami Ral to the Highway through Andorra

In the small village of Prats was the Esglesia de Sant Miquel de Prats (Saint Michael’s Church in Prats). The church was built back in the 12th-13th century and provides a clear example of Andorran rural Romanesque architecture. Impressively, the walls are nearly 1 meter thick to withstand the winter cold. Perhaps this has also helped preserve the church for nearly one thousand years.

Things to Do in Canillo

Once in Canillo, I walked straight to the Canillo Motorcycle Museum. I don’t have a motorbike, but I love their styling and engineering.
Admission was 5€ but given the number of bikes in the collection I felt it was a fair price. I really liked how the bikes were organized by decade, beginning in the 1900s, as it showed how bikes changed over the decades. I also liked seeing how Europe and North America bike styling evolved so differently. 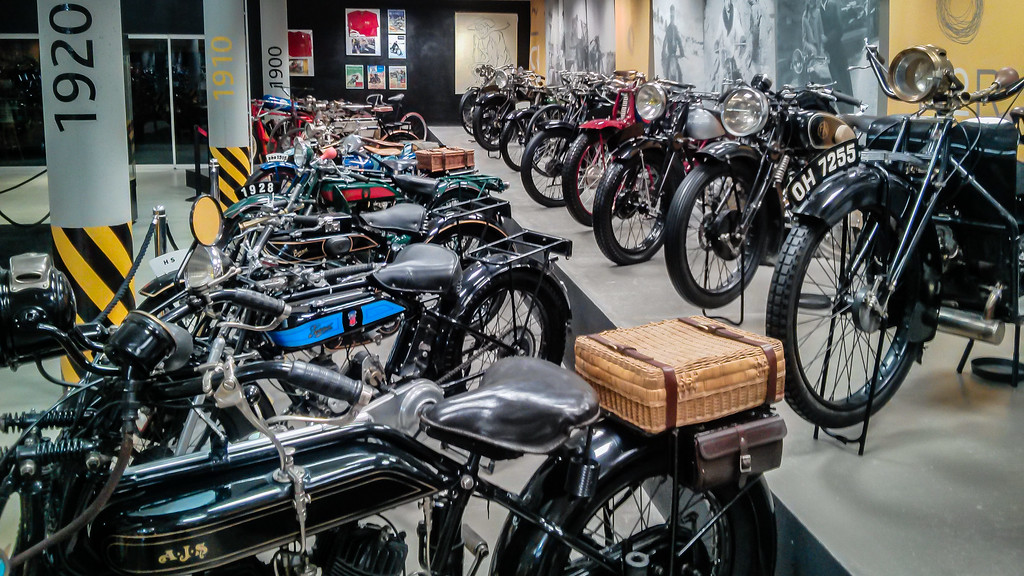 After the motorcycle museum, I explored Canillo, a town of less than 5,000 people.

Canillo has a gondola link to the main ski resort of Grandvalira, making it a busy ski town in the winter. I noticed in late May that a lot of the restaurants and stores were either closed or had significantly reduced operating hours.

Canillo was interesting to explore thanks to the prevalence of old stone buildings. Although Andorra is heavily developed, the stone construction helps buildings blend in with nature. 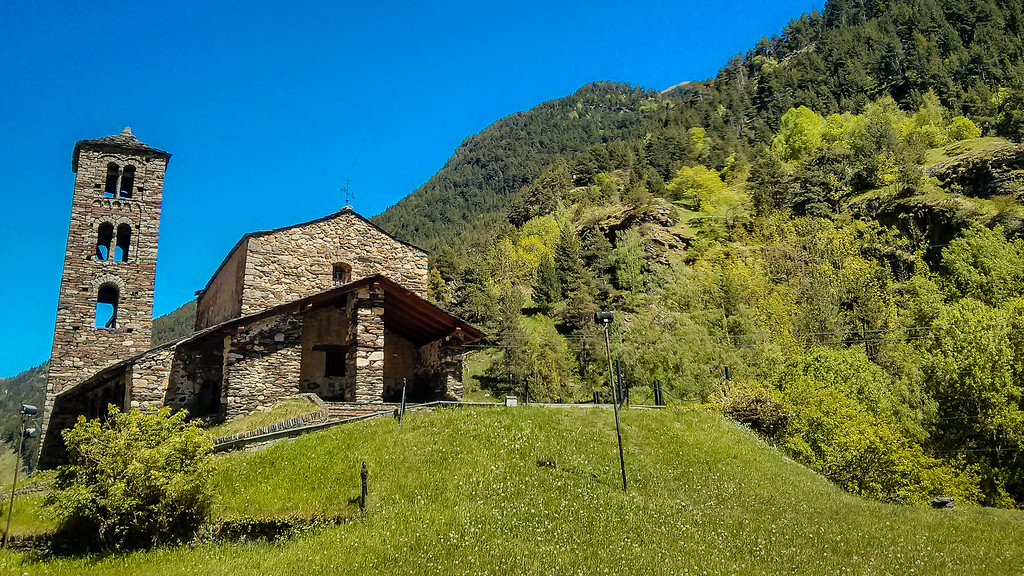 For dinner, I found my options for budget grub in Canillo to be extremely limited due to it being the off-season.

One of the only restaurants open was Restaurante El Sola, which looked nice but expensive. I decided to splurge, and it was possibly the worst, most overpriced, meal of my life. I literally and figuratively left with a bad taste in my mouth.

The service staff was definitely more focused on extorting money out of me than providing a decent meal. When I sat down, the chef started sizzling up delicious chorizo which they brought to my table with bread. Based on the delivery, I would have expected this to be a complimentary welcome appetizer. Luckily, I had heard of this scam before and knew they would charge me extra if I ate it.

…the chef started sizzling up delicious chorizo which they brought to my table with bread, as a seemingly complimentary welcome appetizer. Luckily, I had heard of this scam before…

I should have realized then that the restaurant was going to rip me off, but I hadn’t eaten all day so I persevered. I mistakenly ordered their three-course dinner special, all of which was horribly disappointing. My first two dishes tasted like they’d been prepared the week prior and reheated in the microwave. The dessert was okay, but it could not save the meal.

For 40€ I expected a much better meal and the whole experience left me in a terrible mood. Apparently, the El Sola restaurant is now closed, but expect similar scams in Andorra, France, and Spain.

Sanctuary of Our Lady Meritxell

After a delicious free breakfast at Hotel l’Ermita, I explored the nearby Sanctuary of Our Lady Meritxell, the patron saint of Andorra. The church is actually a very important site in Andorra and the Pope even recognized it as a minor basilica.

Incredibly, many Andorrans speak Catalan, Spanish, French, and English and a gentleman at the Sanctuary offered me a free tour in English

The ‘Old Church’ or ‘Old Sanctuary’ is a chapel dedicated to Saint Mary of Meritxell.  The ancient Romanesque Meritxell sanctuary, which was first built in the early 12th century, and modified in the 17th century, was destroyed by fire in 1972. The Old Church was repaired in 1994 and can be visited behind the modern sanctuary. 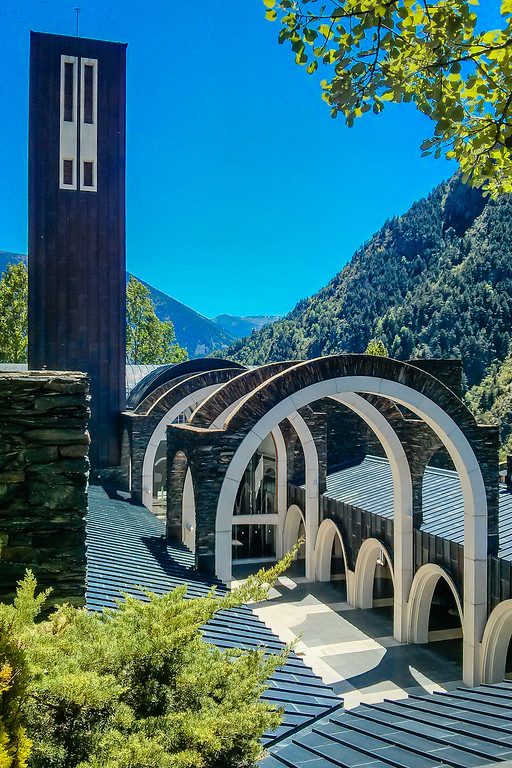 Andorrans were devastated after the fire of 1972 and hired a Catalan architect to build a new church. The Sanctuary of Our Lady Mertixeel was then constructed and inaugurated in 1976.

I was impressed by how the building and surrounding nature promoted peace and contemplation. Given the church was designed in the early 1970s, its open layout and use of dark stone with white arches was fortuitously modern. The open arches and use of dark stone were apparently meant to remind observers of the fire that ravaged the old church.

The Sanctuary of Meritxell is definitely worth a stop if you’re visiting Canillo or driving past Maritxell. The sanctuary is also part of Ruta Mariana, a trail that passes five sanctuaries that are important centers of Marian devotion. The five sanctuaries are: El Pilar (Zaragoza), Torreciudad (Huesca), Lourdes (France), Montserrat (Barcelona) and Meritxell itself (Principality of Andorra). 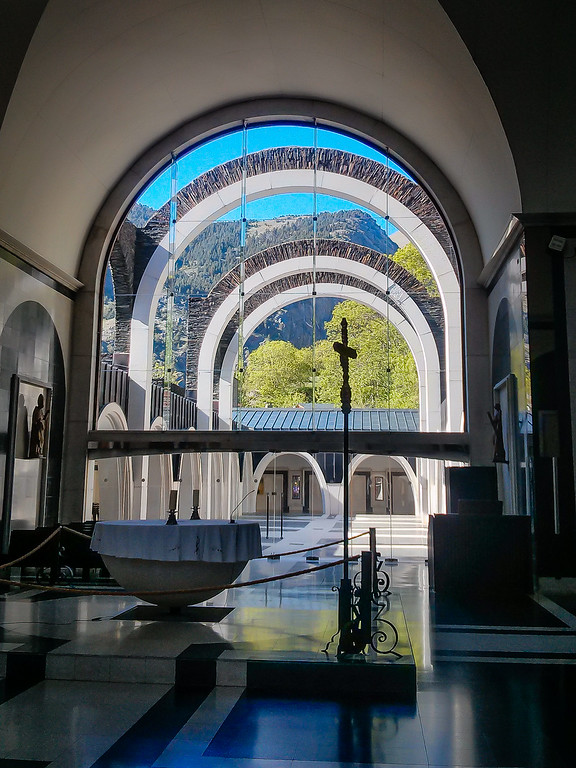 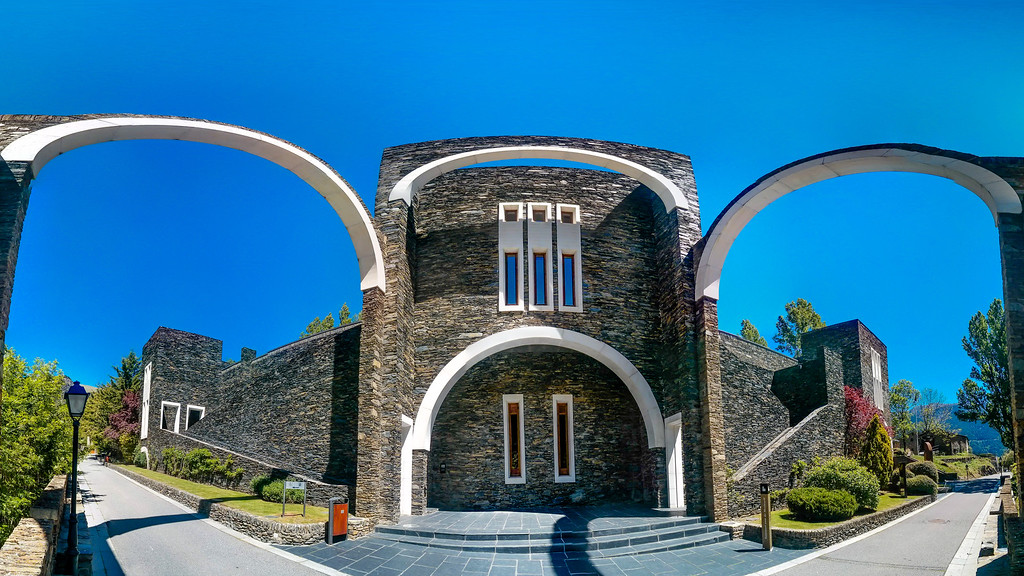 My visit to Andorra was short but sweet. A day trip is worthwhile, but not enough to properly see the country. For my next visit, I’d like to hire a car and do more hiking and biking in the Pyrenees. Either that or rent an apartment in the winter for relatively cheap skiing and snowboarding in Western Europe.

If you enjoy the great outdoors, this microstate is definitely worth checking out!