When I told Australian friends that Sara and I were going to Cairns, many suggested that we check out Port Douglas instead. Although it is possible to do the Great Barrier Reef from Port Douglas, it seemed much easier and cheaper to arrange from Cairns, so we decided to visit both cities and I’m happy we did. Port Douglas is a great little town with a beautiful beach, relaxing vibe, and is just a short drive from Daintree National Park and Daintree Rainforest.  We had pre-arranged accommodation at Dougies Backpackers Resort and I am very happy we did. Along with free return transfers from Cairns (check the schedule on the Dougies Backpackers website), Dougies featured a swimming pool, hammocks, projector screen, bar, food, and very relaxed but social atmosphere.

Upon arrival in Port Douglas and after checking in at Dougies, Sara and I quickly made our way to Four Mile Beach, which is just a short walk from town and one of the main reasons Sara wanted to go to Port Douglas. 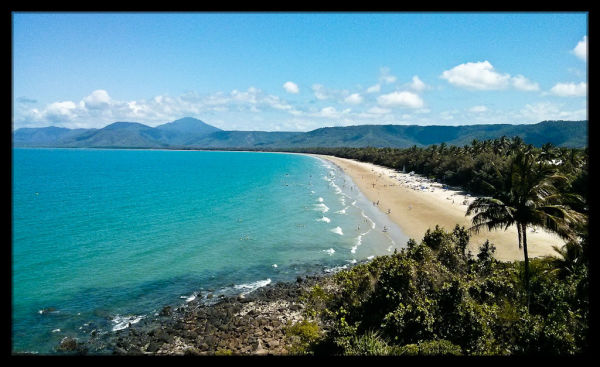 Four Mile Beach is exactly as it sounds – four miles of brilliant sand and water without much development. Although the beach was nice, I was eager to watch the Australian Football League (AFL) final which was on the afternoon of the day we arrived. Dougies had a big projection screen up to show the game, the bar was serving loads of drinks, and many of Dougies’ staff members had their families in attendance. I loved seeing how much of a family affair the AFL final is even though the parents also take the opportunity to indulge in loads of drinks. I saw many blotto parents throwing back Jagger bombs in between footie sessions with their kids. The whole event was a lot of fun and I was reminded of how friendly Australians can be. Before long, Rowan, the staff member who drove us to Dougies from Cairns, introduced me to all sorts of people including other staff and their spouses, kids, and parents. Of course, that led to a number of free jagger bombs being passed my way and many conversations about how much better the AFL is than the NFL in the eyes of Australians. All-in-all it was a lot of fun and I enjoyed seeing the final, even though it was a surprise blow-out in favour of Hawthorn. That evening, Sara returned from the beach and we ate dinner at the hostel which seemed to be good value compared to the restaurants we saw in town (many of which were also closed for the AFL final).

The next day we focused on relaxing and exploring town. In the morning, we made our way to the Saturday market, where we were hoping to buy some delicious fresh farm food for lunch and dinner. Unfortunately, the market was extremely crowded and seemed to be more of a craft and service market than a farmer’s market. The rest of the day was spent relaxing on the beach, in the pool, eating sushi for lunch, and hiking to view points around town. At the end of Island Point Road is a nice lookout over Four Mile Beach and one of the nicest houses I have ever seen. 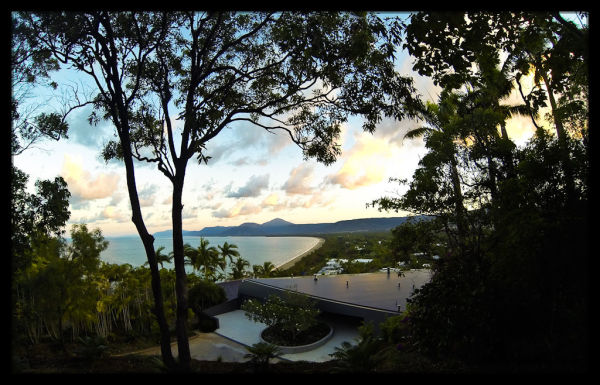 We then found our way to a lighthouse lookout and ended at Rex Smeal Park, on the west side of town, for sunset. Rex Smeal Park is fantastic and would be a wonderful place for an evening picnic. When were arrived, dozens of couples and families were seated around the park watching the sunset over the ocean, many with picnic baskets or bottles of wine. Hungry ourselves, we returned to Dougies and took advantage of their BBQ, grilling up steak and cobbed corn for dinner. 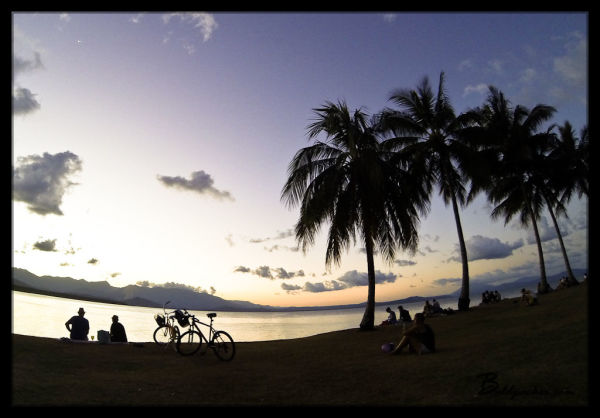 For our last day in Port Douglas, Sara arranged a Daintree Rainforest and Cape Tribulation Tour through Trek North Safaris. The tour departs from Cairns, passes through Port Douglas, and then returns to Cairns so we took advantage of that and arranged for the tour to also act as our “free” return trip to Cairns. Our first stop was the Daintree Cruise Centre, where we hoped to see salt water crocodiles. On the way to the Daintree river we passed a number of sugar cane farms and I was interested to learn about how big the sugar cane industry is to Northern Queensland.

After stepping on to the boat for our Daintree river wilderness cruise, we crossed the river and immediately saw a large salt water crocodile. The guide was very informative and shared lots of interesting facts about crocodiles and the birds, vegetation, and snakes in the Daintree rainforest. I was especially interested in the mangroves and how they deal with limiting salt water intake through their root system and excreting excess salt through their leaves. The scenery along the river was beautiful and it was a very relaxing experience overall. 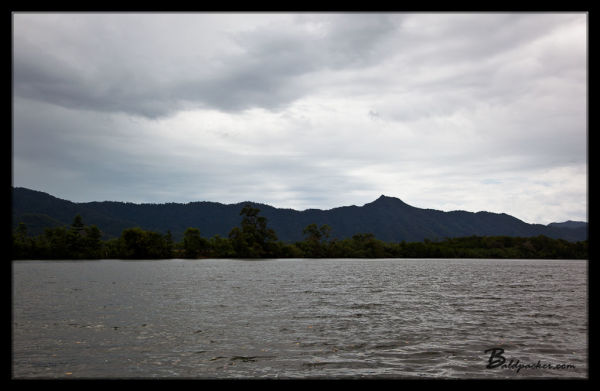 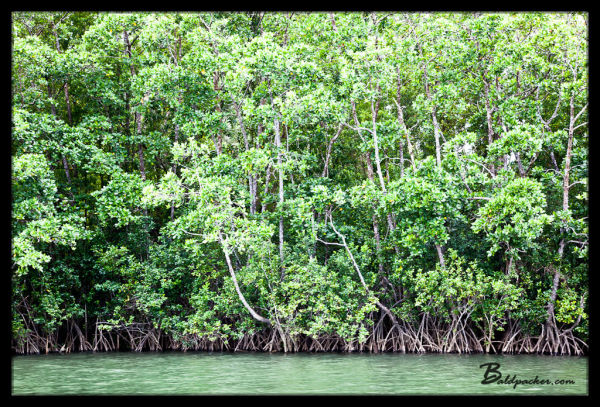 After crossing an old cable barge in our tour van, we made our way to the Alexandra Range Lookout. 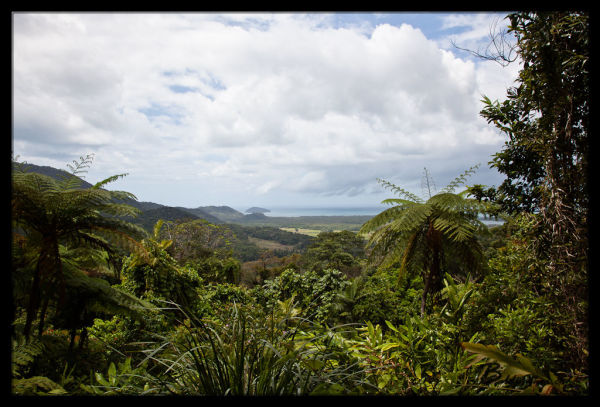 We then went to the Daintree Entomological Museum, featuring Australia’s largest collection of insects, for lunch (the insects were not our lunch). The museum was filled with butterflies, beetles, scorpions and other interesting insects but I was far more interested in the native Barramundi fish our guide was grilling up on the BBQ and made my way out to the beautiful private rainforest area to relax in the shade. The Barramundi was excellent and I was very pleased with the food for a day tour. 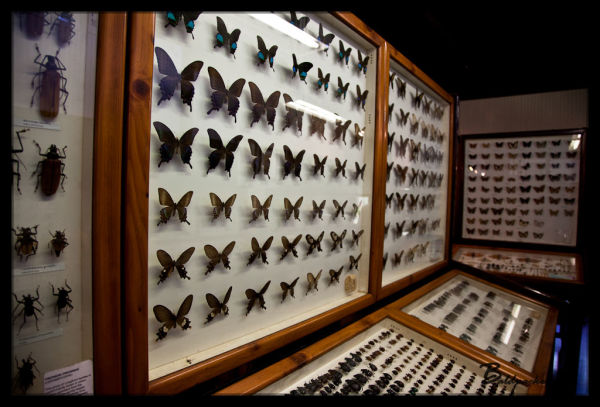 After lunch we went on a short guided walk through the Daintree rainforest where our guide explained a lot about the various trees and plants. The rainforest was filled with trees hundreds of years and age and climbing vines everywhere. The more interesting thing I learned was how climbing vines could cover a tree to such an extent that they strangled the life from the tree. After the tree dies and degrades, the vines are left in place of the tree in a beautiful “Chinese Finger Trap” fashion. 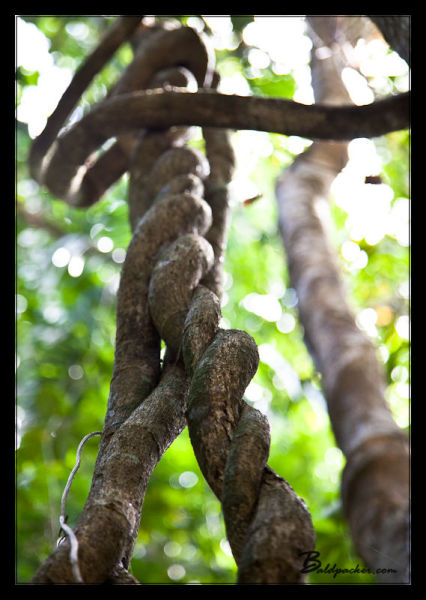 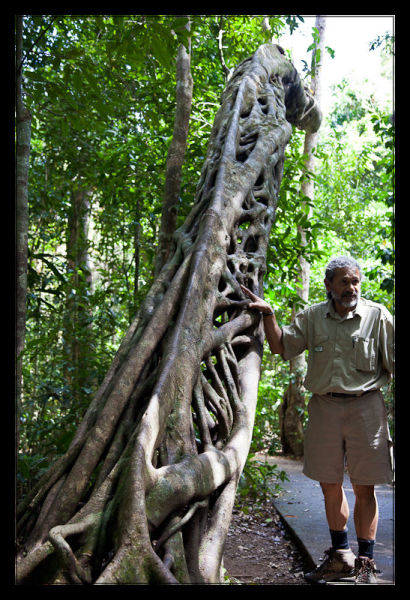 Daintree Rainforest Climbing Vines Which Strangled a Tree to Death 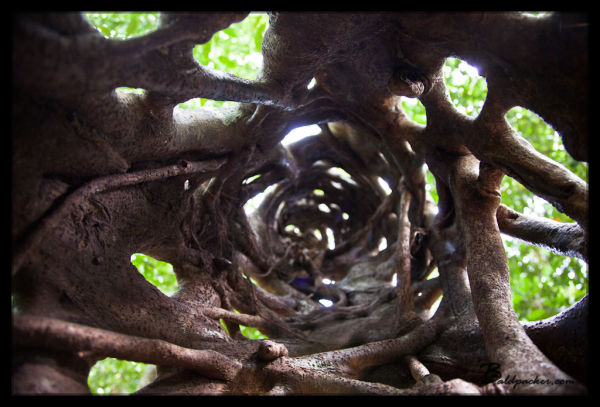 Our last stop was Cape Tribulation National Park. Apparently, the Daintree National Park and Cape Tribulation National Park are the only two World Heritage listed areas in the world to adjoin each other. Sara and I first walked up to a view point out over Cape Tribulation that offered spectacular scenery over the National Park. We then went down to the beach where we were hoping to go for a swim. Just as we began taking off our clothes to go in the water, we heard someone yell “SHARK!!!” Just as one would imagine from the movies, people ran out of the water while parents rushed in to rescue their young ones. We spent the next few minutes watching a large ominous dorsal fin cut through the water. So much for our swim! Although our guide didn’t see it, he figured it was a Shovelnose Shark which looks like a combination of a large ray and shark and enjoys shallower water. 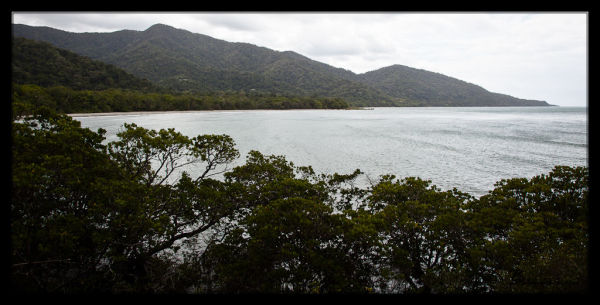 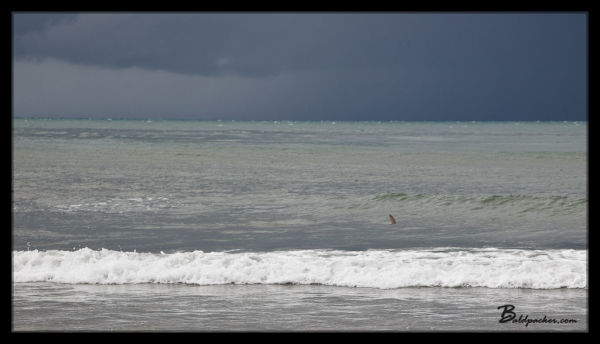 It was a long but enjoyable day and most of us enjoyed a nap on the drive back to Cairns. Although I was disappointed the tour did not visit Mossman Gorge, it was still an enjoyable experience and I definitely learned a lot about the Daintree Rainforest and Cape Tribulation National Park. Given we did not have to pay for a bus or shuttle back to Cairns from Port Douglas and the quality of our lunch, the tour was also very good value and I would recommend doing one if you have the time.