Making the Most of Mostar, Bosnia

The bus from Sarajevo to Mostar was absolutely beautiful. There are natural mountains and lakes and quaint stone houses just off the highway providing excellent scenery for the drive. I have read that the train from Sarajevo to Mostar is even more scenic than the highway and I hope that one day I can make this journey by train. Unfortunately, I wasn’t able to make the most of the views as after my 6am party night in Sarajevo, I had some sleep to catch up on.

Upon arrival in Mostar I was greeted by the hostel owner, Taso, at the Mostar bus station. Taso’s Guesthouse is a little difficult to find and thus he advises his guests to contact him in advance to meet him there. Taso is a very friendly man with excellent spoken English and a beard / belly combination that show he loves life and enjoys the hostel life. Taso’s hostel is in a building that had belonged to his grandfather and was damaged during the war which Taso later re-built and transformed into Taso’s Guesthouse. The hostel is in a great location and I was lucky enough to have the three bed dorm I had booked all to myself; just what I needed to catch up on sleep. 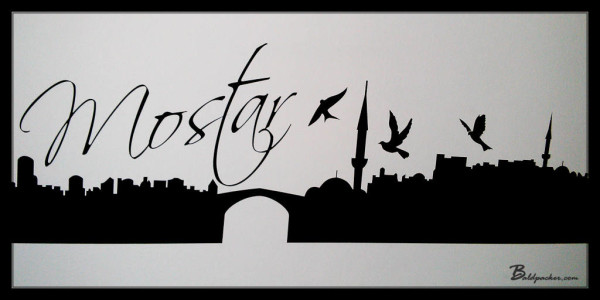 After getting myself settled into my room, I decided there was no better cure for my Sarajevo hangover than a swim in the ice cold Neretva River which flows under the Stari Most old bridge, the most famous tourist attraction in Mostar. I had visited Mostar on a day trip from Split to Mostar during my previous holiday to Croatia so I was already familiar with the tourist area of the city, making it easy for me to navigate to the bridge and through the throngs of tourists. It was much busier in August than it had been in June and I was lucky enough to see several divers jump from the old bridge while I was swimming against the strong current in the cold Neretva River below.

The Stari Most or “Old Bridge” is a reconstruction of the Ottoman bridge that had been built in the 16th century. The bridge crosses the Neretva river and connects the two parts of Mostar. The Old Bridge stood for 427 years until it was shelled by Bosnian Croat forces during the Croat-Bosniak War in 1993. Although the forces claimed the attack on the bridge was “strategic”, it is more likely the intended purpose was to destroy morale due to the cultural significance of the Stari Most. Thankfully, after the war the World Bank, UNESCO, and other organizations arranged for the reconstruction of the bridge using local materials and Ottoman construction techniques to retain the bridge’s original glory. 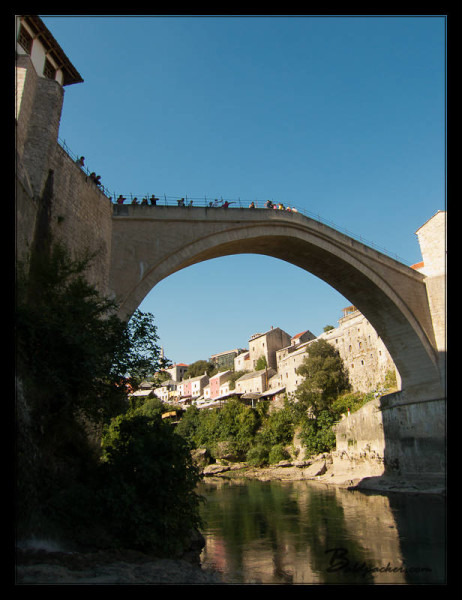 There are many interesting legends and tales surround the original bridge, including a story that the builder had been threatened with death in the event the bridge collapsed. Given that Stari Most was the widest man-made arch in the world at the time, his life was anything but certain, and the legends hold that he had prepared for his own funeral, planned to run away, or had even stood under the bridge when the scaffolding was removed. No sure records exist, but it is fun to hear the locals tell their version of the Stari Most tale.

It is also incredibly enjoyable to watch people jump from the bridge. For several generations, young men have leapt from the 23 meter bridge to show their love for their girlfriends. This leap is no small feat as the water in the river below is freezing cold. In fact, divers pour buckets of cold water over their heads before jumping into the cold river or they risk having a heart attack from the quick temperature change! During my previous visit to Mostar, the local female tour guide spoke of how men had even dived off the temporary bridge during the war. While telling this story her eyes began to water and she became visibly emotional. Clearly, the bridge and history of the bridge mean a lot to the town of Mostar which makes its natural beauty all that more enjoyable to behold. 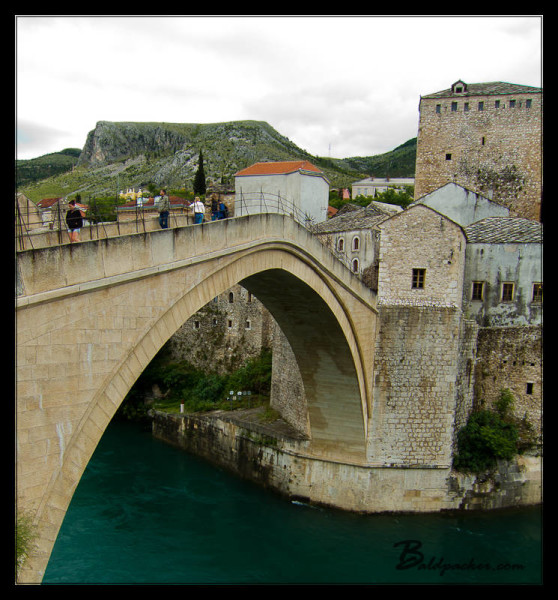 Tourists can also jump from the bridge with the assistance of the Mostar Dive Club. After providing a ‘donation’ to the dive club, they will assist in teaching you how to jump, as well as placing rescue swimmers on the river below. I have a Canadian friend who has made the jump and lived to tell the tale inspiring me to give it a try one day. This day was not the day however as I was still recovering from my big night in Sarajevo and was more interested in finding a greasy Ćevapčići and coca-cola to ease my aching head. One day I hope to return and make the leap, though I’ll ensure I have adequate travel insurance in place first! As the tourist streets the bridge connects are lined with restaurants and cafes it was not difficult to find my meal which I followed up with an ice cold beer and Schweppes Bitter Lemon, a delicious summer beverage I had not seen before that helped bring me back to the land of the living. 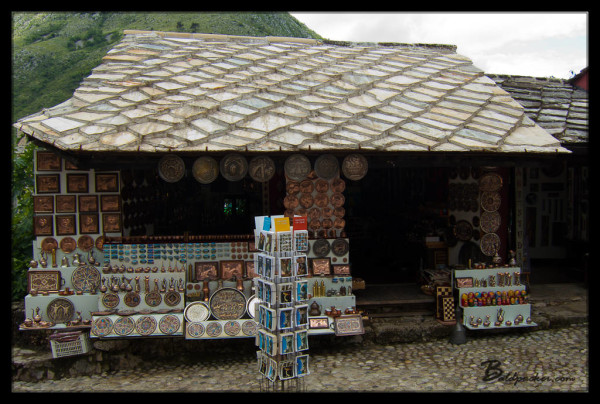 After satiating my appetite and soothing my head, I wandered Mostar’s cobbled old street which is lined with shops selling some of the most interesting souvenirs I’ve seen anywhere in the world. Bosnians have very creatively used the brass from old war munitions and created everything from large engraved flower vases out of used artillery shells to pens, key chains, and toy fighter planes made out of smaller caliber bullet casings. I bought a bullet pen and was lucky enough to get it through airport security on my way back to work.

Side Note: Following my trip, another friend who had gone to Mostar was stopped in Dubai and told that he would need a letter from the Canadian Embassy in order for him to bring his souvenirs through security. Oddly, the security officials who seized his souvenirs apparently thought they were really cool and are now failing to verify that his items are still in their possession, leaving me curious if this was a security seizure or a way to nick his knickknacks…

As the sun set over the city I walked back to the hostel and tucked in for a wonderful sleep in my comfortable air conditioned room. In the morning I met some of the other backpackers staying at the hostel and was offered a traditional coffee by a Slovenian girl. I quickly accepted her offer and enjoyed her strong yet sweet traditional coffee blend. Taso arrived to take me back to the bus station and commented that he had seen my picture on his facebook feed – apparently the girls I partied with in Sarajevo had stayed at his guesthouse as well and thus he recognized me in the photos they had posted. The backpacker travel world is small, but even more so when traveling in the former Yugoslavia.

Mostar is an incredibly beautiful city that is certainly worth more than one day. In my initial day trip to Mostar I had thought the city needed more than a few hours and that a day would suffice. I would happily go back for 2-3 days to further explore the town and get away from the main tourist strip. Who knows, I may even gain the poise to jump off the famous bridge!

3 Comments on “Making the Most of Mostar, Bosnia”