Cologne, Germany • A City of Beer, Cathedrals, and Museums

I visited Cologne twice during my stay in Aachen; the first visit was an afternoon stop on my way back to Aachen from Bonn and the second was a day trip for the famous Cologne Carnival celebration. Although I didn’t get to spend as much time in Cologne as I would have liked, this post includes the history of Cologne, information on the Cologne Cathedral and local Kolsch beer, as well as my suggestions on things to do in Cologne if you have more time than I did. 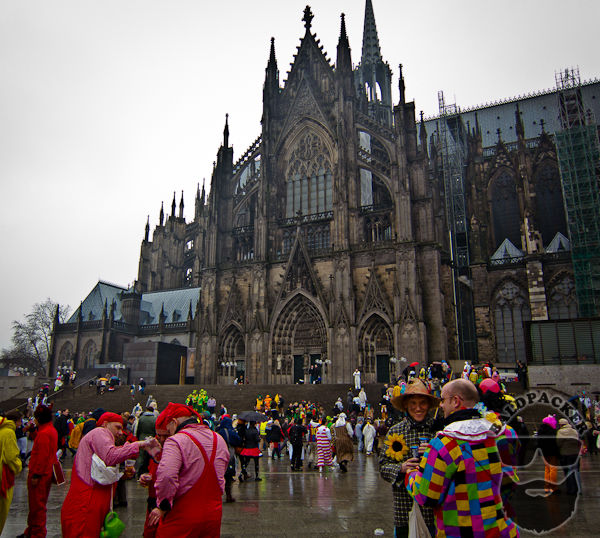 Cologne was founded in the 1st century as a Roman colony called Colonia Claudia Ara Agrippinensium. It was the capital of the Roman province of Germania Inferior and the headquarters of the military in the region.

The Cologne Cathedral, known as the Kölner Dom in German, is Cologne’s  main tourist attraction and Germany’s most visited landmark, attracting an average of 20,000 people per day.

The Cathedral was built between 1248 and 1880 and its towers are approximately 157 m or 515 ft tall. The cathedral is the largest Gothic church in Northern Europe and has the second-tallest spire and largest façade of any church in the world. Luckily, the Cathedral was only slightly damaged during the World War II bombings, allowing a beautiful piece of Cologne’s history to be preserved. 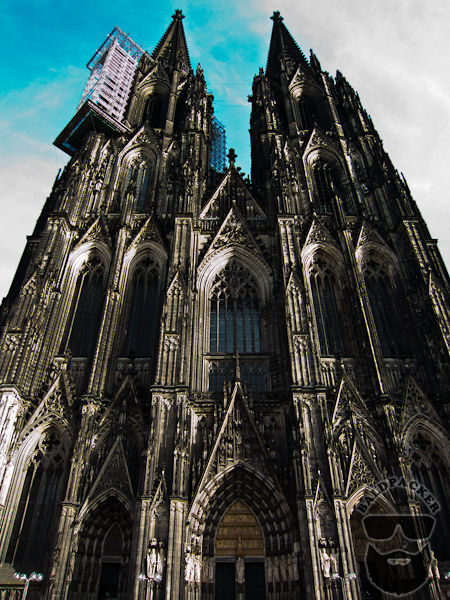 The Cologne Cathedral is a renowned monument of German Catholicism and Gothic architecture and is also a World Heritage Site. You’ll immediately see the Cathedral after exiting Cologne’s main train station, making it very easy to visit, even on a quick train stop in Cologne. 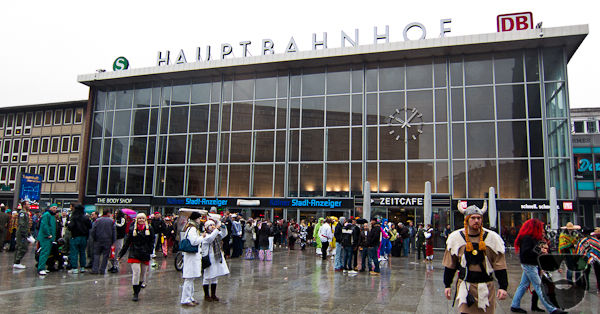 Although you can see quite a bit of the Cologne Cathedral for free, it costs 4€ to climb the 509 steps to the top of the South tower, 6€ to visit the Treasure Chamber, or 8€ to do both.

The Cathedral treasury is home church treasures dating as far back as the 4th century. The treasures are made of gold, silver, bronze and ivory, and include holy relics, liturgical items, textiles, insignias of Archbishops, sculptures from the Middle Ages and Franconian grave finds. After visiting so many museums and churches and seeing so much religious art on my travels I was not interested in paying to see more, but if you’re into that sort of thing it may be worth the money.

The views from the top of the Cathedral are supposedly very good, but my recommendation is to visit the KölnTriangle instead since at the Koln Triangle’s observation deck, 100 meters off the ground, you can get terrific panoramic views over Cologne and see the Cathedral from a distance for only 3€. The Koln Triangle is open late so many suggest visiting as the sun sets and Cologne lights up.

After seeing the Cologne Cathedral, the next priority for me was to visit a traditional brewery, given Cologne is known as the home of a well-known German beer style called Kölsch.

Kolsh is a beer that must be brewed within a 50km zone around Cologne due to the Kölsch Konvention, which sets the rules for beers that can carry the name Kolsch.

Kolsch is a bright, straw-yellow hue beer that has a clean, crisp, delicately balanced flavour, usually with very subtle fruit flavors and aromas. For an “amateur” beer taster, Kolsch may taste like a light lager, subtle Pilsner, or maybe a blonde ale, but there is definitely a uniqueness to the taste of Kolsch beer and many breweries outside of Cologne now market “Kolsch-style” beers.

Clarissa and I went to to the Früh Kölsch brewery in the Altstadt, which is on the opposite side of the Cologne Cathedral from the HBF. The brewery served great food, and the Kölsch waiters, or Köbes, used rough language and crude jokes with customers, just as they traditionally would. Of course, most of these jokes were in German, but Clarissa helped me understand the gist of it all.

While you’re seated inside the brewery, Köbes will continue to exchange empty Kölsch glasses with new ones until you either leave your glass half full or place a coaster on the top of your glass to signal that you no longer wish to be served. 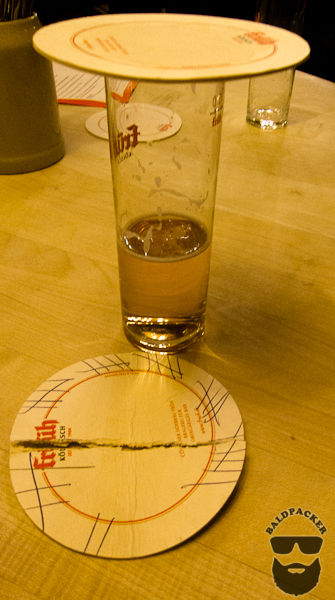 They count the number of your drinks by marking up a coaster, and after Clarissa told me that German men try to drink their way ‘around the coaster’ at least once in their lives. Always up for a challenge, Clarissa and I gave it a go, sharing a coaster, and did a pretty good job of getting around it; the power of team work! The beers are only 0.2L, and cost only 1.60€ each, so I found they went down rather quickly! 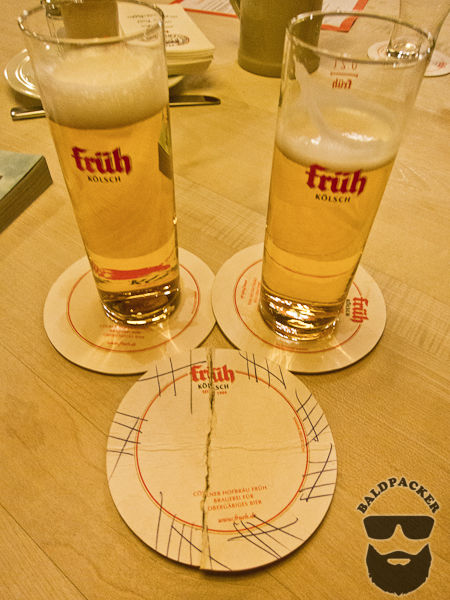 Our Kolsch and Tab (35 Beers) on a Coaster

Kolsch is a much lighter style of beer than I usually enjoy, but it was great to spend a few hours learning German drinking traditions, people watching, and of course enjoying Früh Kölsch beers fresh from the brewery.

Cologne has one of the world’s best collections of museums and galleries for a city of its size. Although I did not have a chance to explore any of Cologne’s many museums, I have done some research for my next visit to Cologne. If you plan to visit several museums, consider purchasing a Koln Card which offers free travel on public transport and up to 50% off museum admission.

There are 36 museums, and over 100 galleries in Cologne, but here are five of the most recommended museums in Cologne:

The National Socialism Documentation Center is the largest regional memorial site in all of Germany for victims of the Nazis. The museum is located in the EL-DE-Haus which was the Cologne Gestapo headquarters from 1935-1945. It is a highly recommended, but sobering museum that reminds you of how recently such atrocious acts were carried out in Germany. If you don’t speak German, an audio guide is recommended since most of the documents and signs are in German.

The Wallraf-Richartz Museum features modern and European art from the 13th century until today. Even though Admission is 8€, I’ve read a lot of people comment that it is worth every penny. Many famous artists are featured including Rubens, Rembrandt, Tiepolo, Boucher, Manet, Monet, Renoir, Signac, Van Gogh, Bonnard, Ensor, and Munch. If you’re an art lover, this is definitely a museum worth a visit!

By 50 AD Cologne was the largest Roman settlement north of the Alps with a population of 45,000 and the archaeological finds from that massive settlement provide the basis of the museums collection. The first major discovery occurred in 1941 when an air raid shelter was being dug and a large mosaic floor tile from a first century Roman Villa was discovered.The museum has the world’s biggest collection of Roman glass vessels. Among the most precious objects are the rich goldsmith works from the Diergardt Collection and relics of Germanic and equestrian nomad peoples from all over Europe. Admission is 9€ for adults but if you’re interested in Roman history, especially the extent of Roman development in Europe, this is a museum to consider visiting.

If you like eccentric pop art, photography, or stunning architecture, this is the museum for you. In addition to the works by Picasso, Dali, Magritte, and Warhol, the museum is housed in a beautiful architectural design. The only complain I’ve head is that the 11€ admission is steep for those with only a general interest in modern art and design.

The original Eau de Cologne is a spirit-citrus perfume launched in Cologne in 1709 by Giovanni Maria Farina, an Italian perfume maker from Santa Maria Maggiore Valle Vigezzo. In 1708, Farina wrote to his brother Jean Baptiste: “I have found a fragrance that reminds me of an Italian spring morning, of mountain daffodils and orange blossoms after the rain”. He named his fragrance Eau de Cologne, in honour of his new hometown.

The Farina-House Fragrance Museum provides guided tours for 5€ that teach visitors all about Eau de Cologne and its history. The tours take approximately an hour and it is recommended you book in advance.

Other Things to See and Do

If you’re looking for free outdoor entertainment, there are numerous beautiful parks in Cologne, many of which have beer gardens.

The Hohenzollern Bridge is also worth a visit as it is covered in thousands of “Love Locks” – if you’re visiting Cologne with your special someone or just want to send a thoughtful photo to them, considering bringing your own lock to attach to the bridge.

The Claudius Therme pools, which has saunas and indoor, outdoor, and cold plunge pools sounds like a great place to unwind. There are several ‘naturist areas’ so if you really want to try the local German culture, consider baring it all.

In December, Cologne hosts spectacular Christmas Markets all over town so if your timing is right, you should definitely take a look (the market near the Cologne Cathedral looks especially nice when lit up in the evening).

Enjoy My Posts About Cologne? Please Share the Pinspiration: 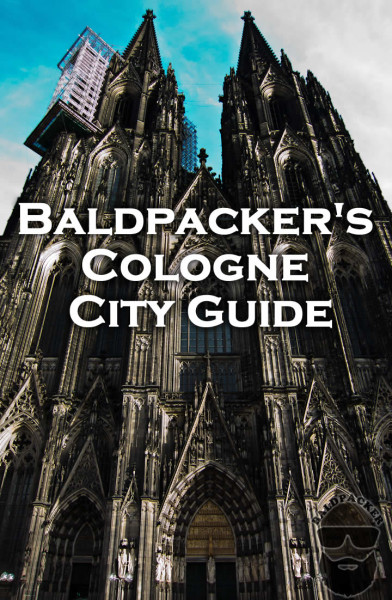