Read about when we first arrived in Addis Ababa HERE.

We arrived back in Addis on a flight from Lalibela and managed to negotiate a yellow taxi to the Piazza area for 150 birr (US$ 7.50). The taxi drivers were once again asking for 400 birr (US$ 20), but after we walked away one driver approached us and said that Piazza was on his way home and that he’d agree to 150 birr. I do not believe at all that he was actually on his way home, but it was a good excuse for the taxi drivers to save face but still get a fare. We had read that Piazza was the best place to find budget backpacker accommodation, but after arriving in the Piazza we discovered that such accommodation is not at all that easy to find. After looking at a few places, which either had no vacancy or were actually bars with hotel signage, we found a room at the Baro Hotel for 250 birr (US$ 12.50) per night. The room was bright green, had an uncomfortable bed, and there was a night club next door that pounded loud music throughout the night. I can definitely say that the Atelefugne Hostel where we stayed our first night in Addis Ababa was more comfortable, but at least the Baro Hotel was closer to the action. 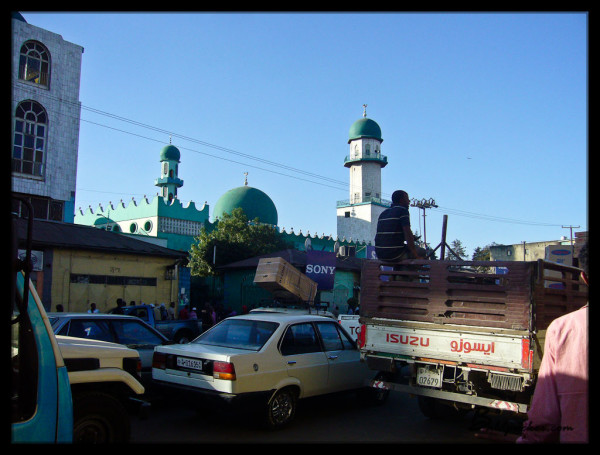 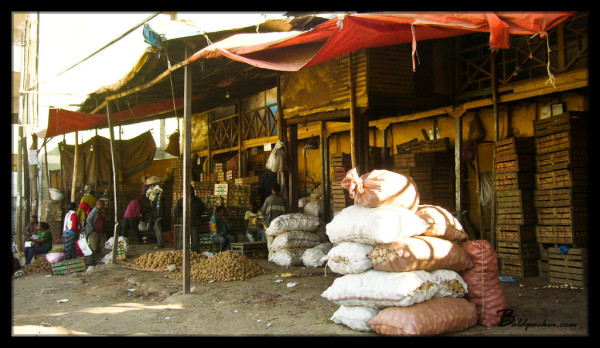 We went exploring the Piazza area by foot and found a patio bar where we were able to have lunch and a beer. It was a nice place that was very crowded with locals, but just as our meals arrived they cranked up local Ethiopian music until it was so loud that the speakers were only barking distortion in our ears. Since we could not even enjoy conversation over our lunch, we finished up our food quickly and kept wandering towards an area where we thought there may be a large market. Unfortunately, Addis Ababa is not a great walking city as the sidewalks are often blocked with garbage, rubble, sales people, and beggars, and the roads are filled with unpredictable cars and people. I quickly grew tired of all of the beggars and lost my patience for politely saying “no” to the teenagers and children who would just continue to follow and hassle us. I finally resorted to yelling “NO, GO AWAY” loud enough for other Ethiopians to take notice which seemed to have the desired effect of shaming them away. This is an excellent blog post on the hassles of beggars in Ethiopia (specifically Addis Ababa) that I would recommend reading before traveling to the city:  http://portableprofessionals.com/perpetual-travel/beggars/

Due to the traffic, crowds, and beggars,  Sara and I soon decided it was not worth the hassles, gave up on finding the market, and walked back to the Baro Hotel. Although we were unable to find the Central Market, we did find a grocery store where a very helpful older man recommended excellent honey and coffee for us to buy as souvenirs. It was nice meeting such a friendly older gentleman after our hectic walk and I was reminded that most Ethiopians actually are wonderful people, but that our Western faces tended to draw less savoury locals.

After a not-so-great sleep at the Baro Hotel, I woke up and spent the morning online trying to book another room for that night. Eventually, I decided on the Solo Te Hotel, which was close to the airport and included free breakfast and an airport shuttle for US $72. Unfortunately, the WiFi kept dropping so I was unable to book the room online, but we figured that we would be able to show up that evening and secure the room for the same price. We then checked out of the Baro Hotel, put our luggage in storage, and set out on a wonderful walking adventure around Addis Ababa.

Our first stop was a coffee shop where we had a wonderful breakfast. There are lots of great coffee shops in Addis Ababa and many are just as nice as those you would find in Europe, likely due to the former occupations by Italians. After getting our caffeine fix we continued on to the National Museum, where I was really interested in seeing Lucy, a 3.2 million year old hominid skeleton widely considered to be the oldest fossil skeleton of a human ancestor. The admission to the museum was only 10 birr (US $0.50) and I really enjoyed the exhibits. There was a lot of information about archaeology and the evolution of humans, but the thing I surprisingly enjoyed the most was the artwork on the second floor. There were fantastic Ethiopian paintings and sculptures on display and I spent a lot of time viewing them all and trying to imagine the lives of the artists who painted them. 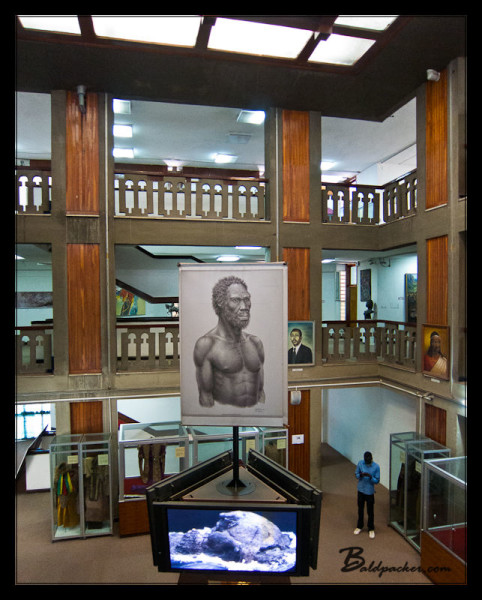 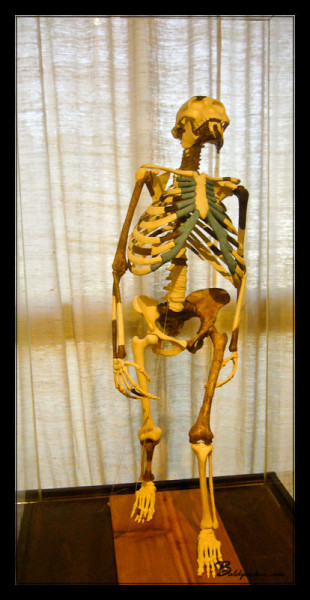 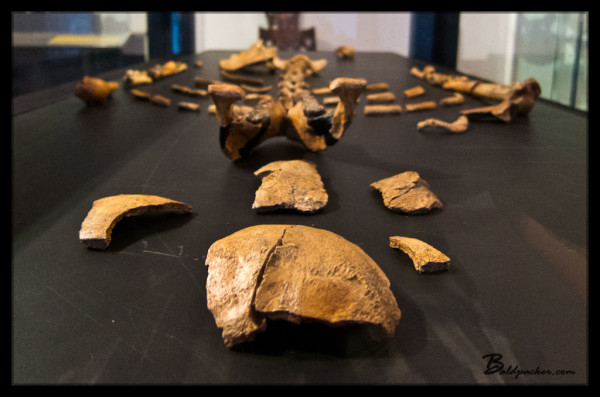 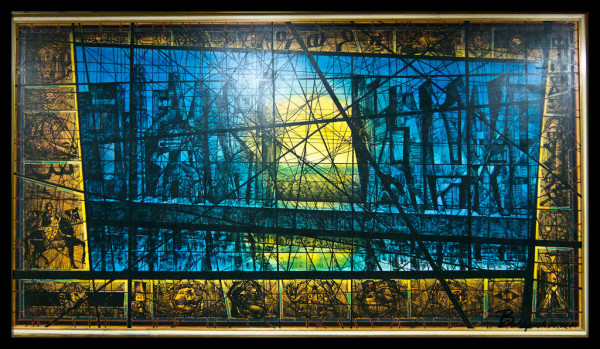 From the National Museum, we walked towards the Ethnological Museum, which I had located earlier on Google Maps. On the way, we passed the Yekatit 12 Monument, which is a date on the Ethiopian calendar equivalent to February 19th on the Gregorian calendar. The monument represents the terrible massacre of Ethiopians that occurred on February 19th, 1937 after an attempted assassination of Viceroy Rodolfo Graziani, who was the supreme governor of Italian East Africa at the time. Ethiopians estimate up to 30,000 people were killed by the Italian forces in retaliation for the assassination attempt, making it one of the worst atrocities committed by the Italian occupation. 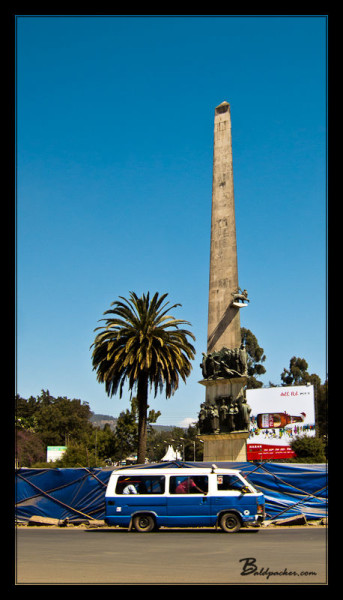 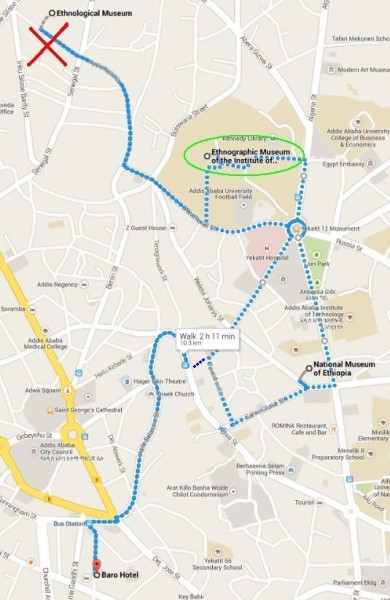 Unfortunately, as the walking map I attached above shows, the location of the Ethnological Museum on Google Maps may be shown incorrectly, and the actual location is within the Addis Ababa University grounds. From the Monument, we continued up towards the location on my offline phone map, past a number of embassies, and towards where we thought the museum would be. Finally, a friendly young boy on a bicycle said “You looking for museum? Google’s wrong. Let me show you.” Clearly we were not the first people to follow our Google map to this residential suburb by mistake. The boy pointed us in the direction of the museum and eventually we found it, located within the Addis Ababa University campus.

The Ethnological Museum is located within Haile Selassie’s former palace, which is now the Institute of Ethiopian Studies at the University of Addis Ababa. Haile Selassie was the last emperor in the 3,000 year old Ethiopian monarchy and was forced out of office in 1974 by a military coup, before dieing in 1975 (possibly at the hands of the new government). In front of the palace, there is a spiraling stair case built by the Italians – it is said that each step represents a year Mussolini held power and a small Lion of Judah (symbol of the Ethiopian monarch) sits atop the final step. 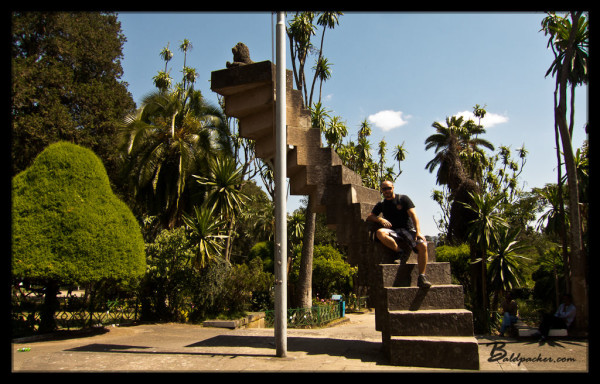 Staircase Outside Institute of Ethiopian Studies

It cost 100 birr (US $5) for me to enter the Ethnological Museum, but Sara was able to enter for 50 birr (US $2.50) using her student card. The Ethnological Museum is very informative and provided all sorts of interesting information on Ethiopia’s food, culture, and economy. I enjoyed visiting the Ethnological Museum at the end of our trip, but I believe it would also be very interesting to see prior to exploring Ethiopia. There are a lot of good stories and explanations provided (in English) and I would suggest 1-2 hours is enough time for most people to see the exhibits but, if you are a museum freak, you could easily spend an entire day viewing everything. 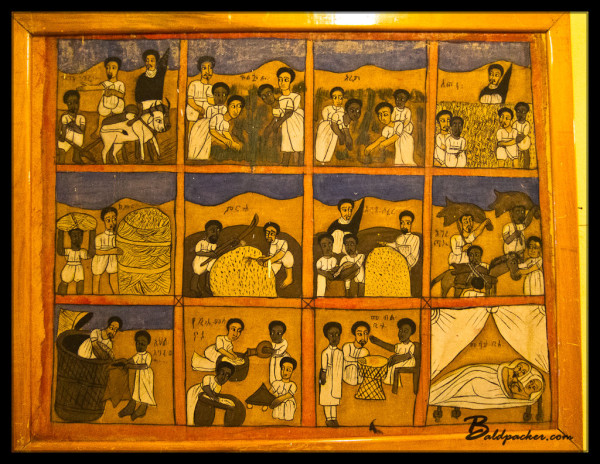 Apparently Making Good Injera Can Get You Laid…

After the museum, we walked back to Haile Selassie Street which had a large number of restaurants. Eventually, we found an Italian pizza and pasta restaurant filled with locals and we decided it was a good place to try. The portion sizes were huge but unfortunately I found my mixed platter to be a North American take on Italian food rather than actual Italian food. Our lunch experience was saved, however, when we found an ice cream shop further down the street and Sara and I were able to enjoy some delicious sorbet for dessert. From there, we went back to the Baro Hotel, collected our baggage, and negotiated a taxi for 100 birr to the Solo Te Hotel.

Having learned my lesson from previous taxi rides where the driver had no idea where our destination was, I marked the location of the hotel on my phone in advance and directed the driver using the GPS function. When we arrived at the hotel, the front desk quoted us a rate far higher than the US$ 72 price we had found online. After a little negotiation, we were able to secure our room for the online price. The Solo Te Hotel is quite new, luxurious for the price, and close to the airport. The shower was wonderful after a day of wandering and after watching the sunset from the room’s patio, Sara and I went down to the bar for a few drinks. I was more than happy to use my last birr on beer, and I savoured my last Ethiopian beers of the trip.

The next morning we enjoyed our free breakfast, packed our bags, and then checked out of the hotel. We waited in the lobby for a while for our free airport shuttle and were beginning to get nervous about how much time we had to get to the airport when the manager or perhaps owner told us that he’d pay for our taxi to the airport to ensure we would not be late. What an amazing gesture for us to finish our trip! If you are looking for a nice, but affordable place to stay near they airport, I would highly recommend the Solo Te. It is not in a central location and I did not see any nearby restaurants or stores, but it would be a great place to overnight if you are just laying over in Addis Ababa for an evening.

Although Addis Ababa was a bit too hectic for my liking, I was very happy to see the National Museum and Ethnological Museum as well as explore the city. The next time I am in Addis Ababa I will plan to visit the Red Terror Museum as I have heard that it is a very educational and informative place, despite its depressing subject matter. Given how much I enjoyed the rest of Ethiopia, and how much of Ethiopia I am yet to see and explore, I am sure that visit will happen in the near future.

← Ethiopia: My Pilgrimage to Lalibela Part 2
New Zealand: Christchurch After the Earthquakes →