I awoke in Vilnius, Lithuania, just in time to run for my pre-booked bus to Riga which departed from Stotis Central Station.  The buses in the Baltic countries are excellent and my bus featured free WiFi which greatly reduced the hardship of the four and a half hour journey after a late night and short sleep the evening prior.

When I arrived in Riga I made the short walk from the bus station to my next hostel, Friendly Fun Franks Backpackers Hostel. Once at reception I was greeted by two beautiful Latvian girls and a welcome beer from the common area bar. Clearly the party which began in Lithuania was going to continue in Latvia. Friendly Fun Franks is slightly more commercial feeling than Jimmy Jumps House had been in Vilnius, but it is still an excellent hostel and features a very large common area / bar with excellent views out over the Daugava river. 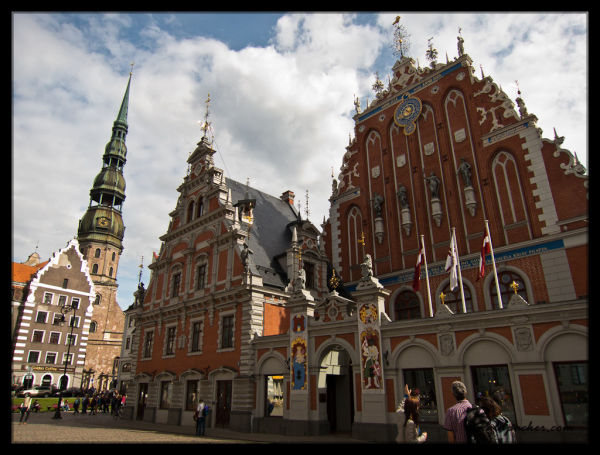 I was quite hungry after my bus journey so Sam, an Aussie bloke I met in the hostel, and I asked the receptionist where she would recommend. She pointed us towards Folkklubs ALA Pagrabs which was right around the corner from the hostel and became my favourite restaurant of the trip. Folkklubs ALA Pagrabs is a massive restaurant and bar underground in a massive stone cellar. Folkklubs had 14 local beers on tap as well as an extensive meat-heavy menu that greatly reminded me of Bavarian Germany. This is fitting given that Germans have inhabited Riga since its establishment in 1201 and therefore many German architectural and gastronomic influences are still present today. The menu item that stuck out most was the 1kg pork hock (for only 8.50€) though since it took around 45 minutes to prepare we also ordered a garlic bread starter (2€) to help stomach our beers. 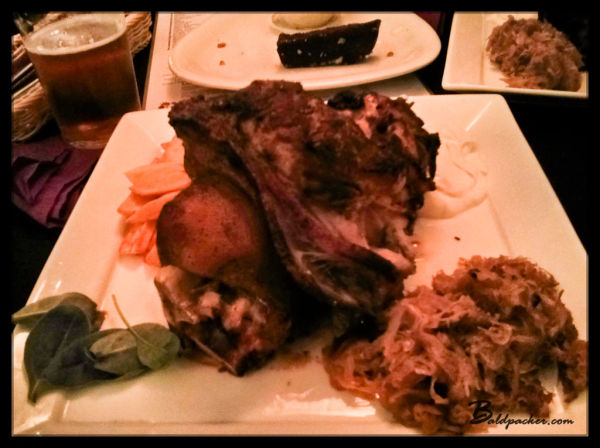 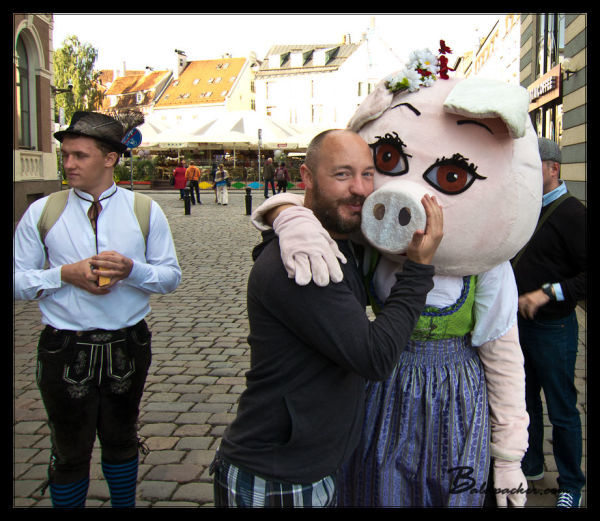 Let me say, Baltic garlic bread is so potent that after eating each piece I felt like I could blow flames of garlic. Slices of rye bread are fried in butter and rubbed down with cloves of garlic. This already extremely garlicy bread is then served with a sour cream and garlic “butter” for added garlic potency. After my first bite of that garlic bread all of my concerns of being chased by vampires and women immediately vanished and I could focus on the beer menu and trying to eat my massive pork hock! I made a valiant effort in finishing the softball sized succulent cut of pig but despite my immense hunger I only succeeded at getting ~70% of it down before I threw in my white napkin.

When we returned to the hostel there was a large group preparing to go on a pub crawl. At first I said no but after they explained that it was just five pints at five pubs for 10€ I decided it would not be too crazy of a time and decided to tag along. The first “pub” was where Sam and I had just come from dinner so it was amusing to return to our wonderful waitress for yet another beer having just said good-bye minutes earlier. We then went to a couple other bars, including the Kiwi bar and Funny Fox bar which are both owned by the same guy who owns Franks. I should know by now never to underestimate the power of a hostel pub crawl as by the time we reached the Kiwi bar there were jagger shots being lined up on the bar and at Funny Fox I was one of the first with a karaoke microphone in my hands. So much for a quiet five pints before bed! I can see why Riga is such a favourite among Brits for their hen and stag parties as the city truly is a good time no matter where you go.

The next day, after a powerful sleep, my friend Liz (hereinafter Lizaster) arrived from Dubai. Lizaster is a flight attendant and was able to take advantage of having four days of leave and her discount flights by flying up to meet me. Had it not been for Lizaster I may have sat around the hostel nursing my hangover all day but instead she immediately rallied me to go on a free walking tour organized through the hostel. I have heard from several people that the free walking tour in Riga is excellent but our guide failed to engage us and we were soon plotting our escape from the tour. 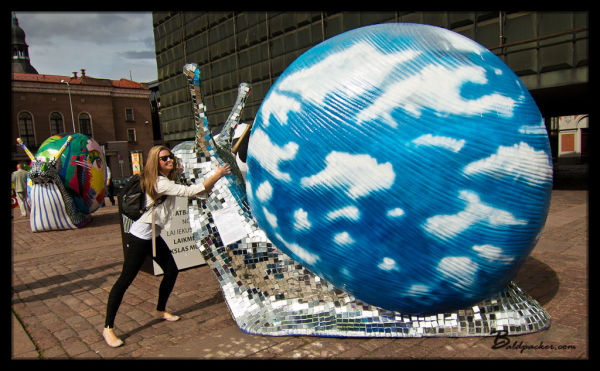 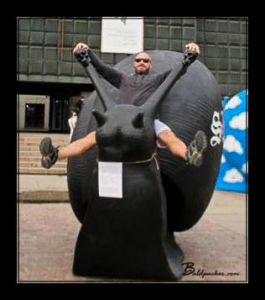 After passing the Latvian Riflemen Monument, which was originally dedicated to the Red Riflemen (some of whom were Lenin’s personal bodyguards), we found our way to a beautiful outdoor beer garden which featured a traditional Latvian band. It was the perfect place to sit and absorb Riga’s atmosphere while catching up with Lizaster and hearing some of her wild travel stories. 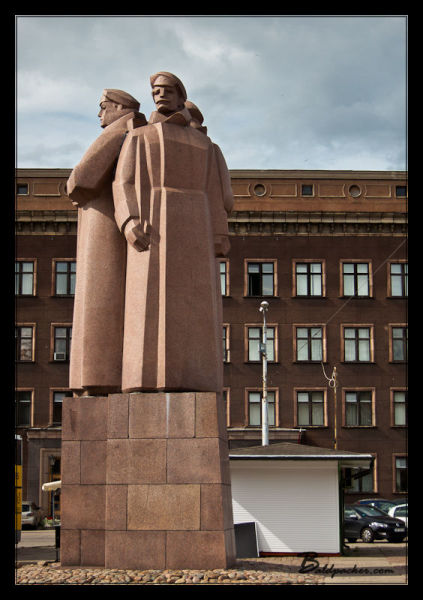 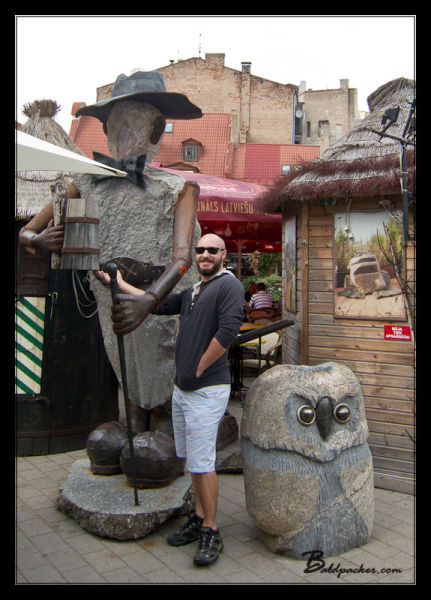 After a couple of beers we wandered through Latvia’s old town, passing a strange collection of painted snails in a large square, and made our way back to my favourite restaurant, Folkklubs ALA Pagrabs, which I cannot recommend enough. Once there I treated Lizaster to the 2€ garlic bread experience and we enjoyed a very formal Eurovision style karaoke contest while eating at a large shared table, just like in Bavaria. Apparently Folkklubs offers live music at least four nights a week, including open-mic nights, folk dance nights, and of course, karaoke nights. I was not yet ready to attempt another 1kg pork hock so instead I tried traditional Latvian meat balls, which were also delicious.

Lizaster and I then wandered the old town looking for a good pub for the evening before finally deciding that karaoke at the Funny Fox was the best game in town. When we arrived we picked up the microphones and belted out a decent rendition of Guns n’ Roses’ Sweet Child of Mine before joining a couple other guys we recognized from the hostel for drinks. One of the unique local shots we had seen being poured involved the bartender lighting the shot on fire and sprinkling cinnamon on it, creating huge sparkling flames. Of course, seeing familiar faces called for such a celebration and we asked for four cinnamon flaming shots to be lined up on the bar. 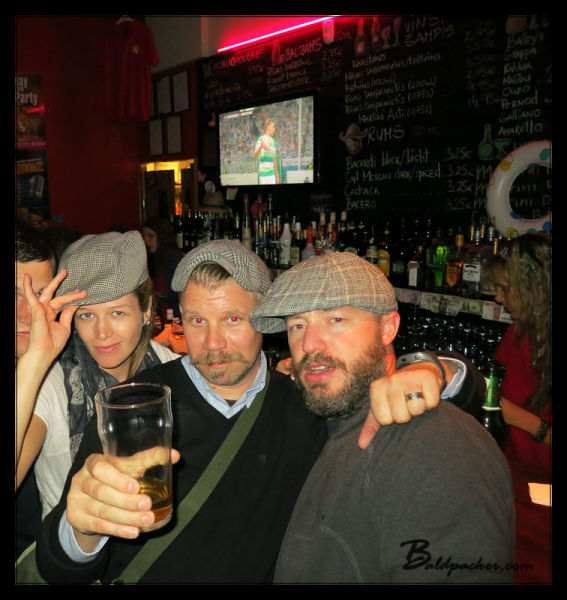 Lizaster, Teemu, and I Trying to Blend in with the British Lads 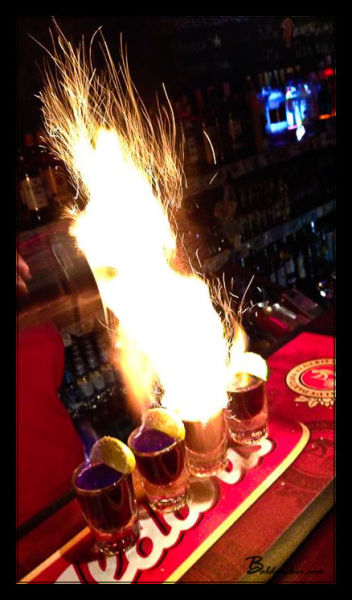 After warming our throats with fiery cinnamon goodness and hearing one too many butchered karaoke songs Lizaster and started making our way back to the hostel. On the way, we saw a night club with a massive outdoor terrace, Just Bar, which we were recruited into by another foreigner who bought us our first round (I’ll thank Liz’s good looks for that)! The atmosphere in the club was fantastic and Lizaster and I proceeded to buy a bottle of champagne to celebrate reuniting in such a fun town. After half a glass each we realized we both had already had a long enough day and adequate booze and decided to call it a night, leaving the nearly full bottle of champagne on the table. That is definitely the closest I have ever been and ever will be to vaskning (Swedish term for pouring champagne down the sink to show off wealth). In any event, it was a night to remember and a couple sips of champagne was a good way to finish it off. 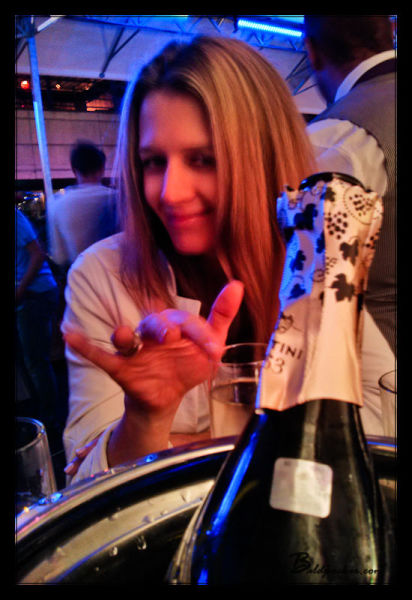 Our final day in Riga started as slowly as one would expect but our Teemu, our Finnish moustached friend from the evening before, convinced us that an English breakfast would solve all of our worries. We went to the Kiwi Bar where they served up a surprisingly good English breakfast and I was reinvigorated to make the most of the day. Upon returning to the hostel I saw my favourite Australian couple from Vilnius and Lizaster and I decided that the previous day had been such a success that we may as well repeat it! 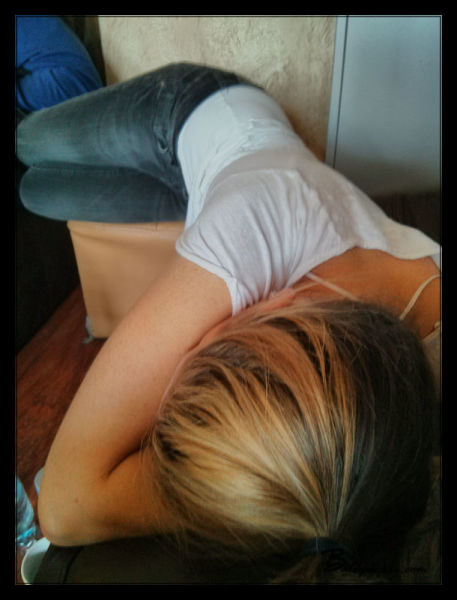 Lizaster barely had a pulse after night #1.

Everyone Has a Good Time at the Beer Gardens!

We once again had beers in the open square with live traditional music, went to Folkklubs ALA Pagrabs for dinner where all three guys in our group attemped the 1kg pork hock (I once again failed to finish the whole thing), and ended the night at the Funny Fox bar singing karaoke. After two nights of warm-up I was eager to make a hard run on the microphone and our group rocked the bar with Journey’s Don’t Stop Believin’, Oasis’ Don’t Look Back in Anger, and Bon Jovi’s Livin’ on a Prayer. Livin’ on a Prayer was our ultimate encore as we had the whole bar singing along and I enjoyed my few minutes of fame yelling out vocals and twirling the microphone chord while the crowd sang and cheered us along. Even the hard-ass karaoke girl was impressed. At this point, Liz was intelligent and went back to the hostel whereas I followed the hostel pub crawl to Ideal Bar for a Tequila Paddle. First of all, a Tequila Paddle shouldn’t even be a thing and second of all, it should never be ordered. It was not the best way to end a night and I much preferred the two sips of champagne we had the previous night as a night cap. In any event, it was probably the “Ideal” wrap-up to three heavy nights of experiencing Riga’s nightlife. 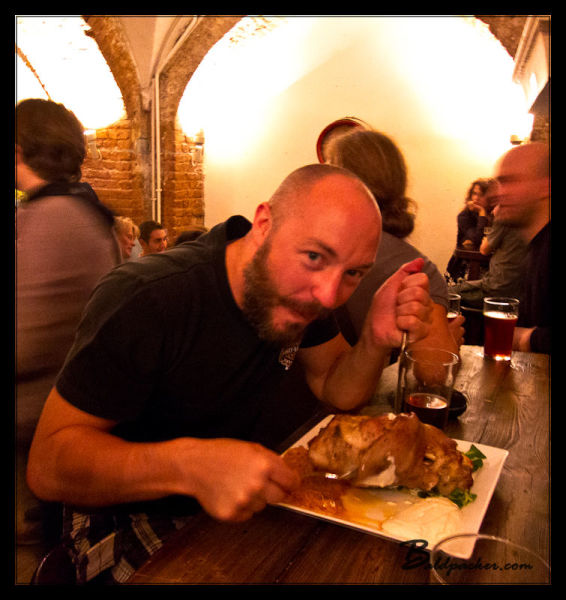 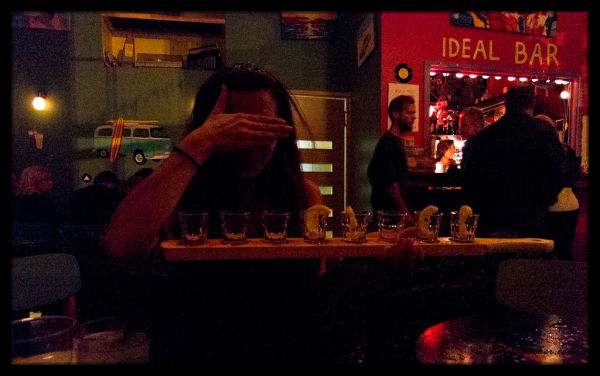 My journey through Lithuania and Latvia was definitely more party than travel but when the atmosphere is right sometimes it just needs to be done. It was amazing to have Lizaster arrive to share in the memories and my liver survived just enough for me to return to these amazing countries for a more wholesome sightseeing experience one day – Priekā! (Cheers!)