The drive from Wanaka to Franz Josef was probably the longest drive of the trip so we set out early in the morning. The roads were generally quite twisty and slow and it took over 5 hours to make the 287 km drive, not counting our many stops along the way. Our first stop was along Lake Wanaka itself and it was so beautiful I almost wanted to turn back to spend more time in Wanaka!

Once we reached the coast we were treated to some wonderful ocean views as well as treated to different vegetation along the highway. As lunch time neared we decided it was worth making a stop for a bite to eat and found a beautiful beach to snack on crackers and cheese. Unfortunately, we quickly realized the sandflies were everywhere. I even changed into long pants within a minute of being out of the car they were so bad. The sandfly situation was a little bit better on the beach thanks to the wind, but they were still terribly annoying. Had I not seen a pod of dolphins riding waves out at sea I likely would have rushed back to the car but I wanted to see the dolphins too much to depart. I was lucky enough to see the dolphins jump a few more times but soon decided that it was not worth the irritation of my incredibly itchy legs. 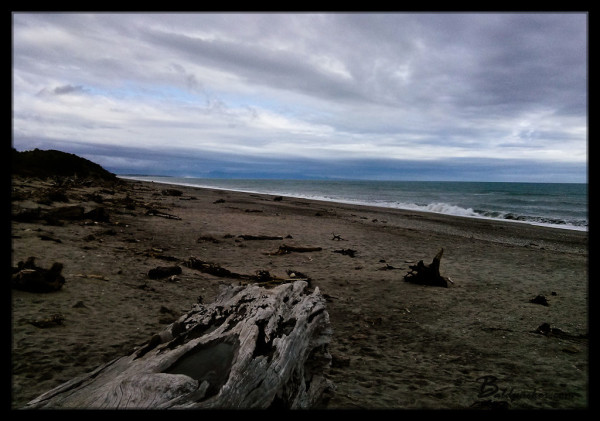 We returned to the car and continued driving to Fox Glacier facing a lot of rain showers along the way. By the time we reached Fox Glacier it was late afternoon and sprinkling rain, but we decided to make a quick walk to the glacier anyways. I had been really excited to show Sara the glaciers, but was disappointed to see that they were far less beautiful in the fall. On my Spring visit in 2010 I had been amazed by the beauty of it all, but we were given little more than 50 shades of grey in the dreary sky, dirty glacial ice, and eroded rock faces. Disappointed in what we saw, we returned to the parking lot where we first met Kea birds. 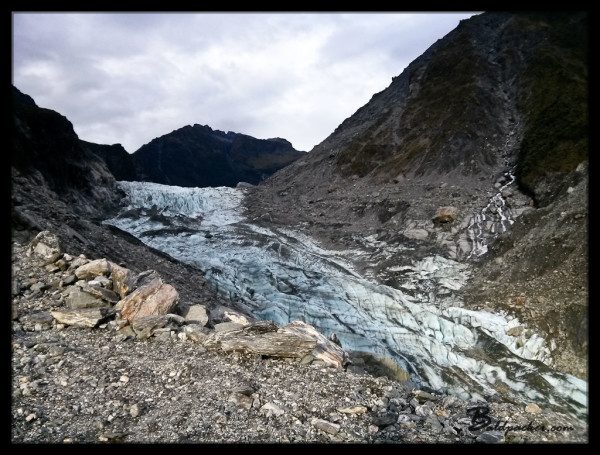 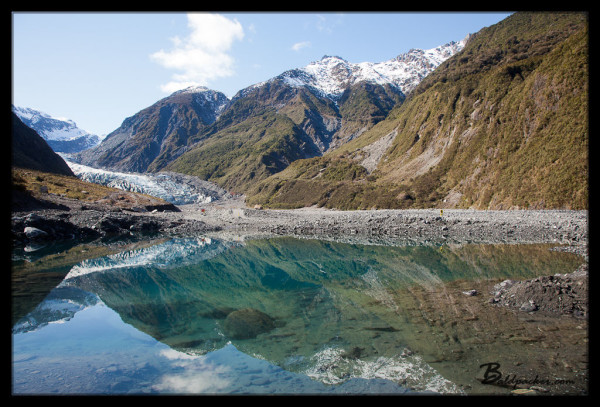 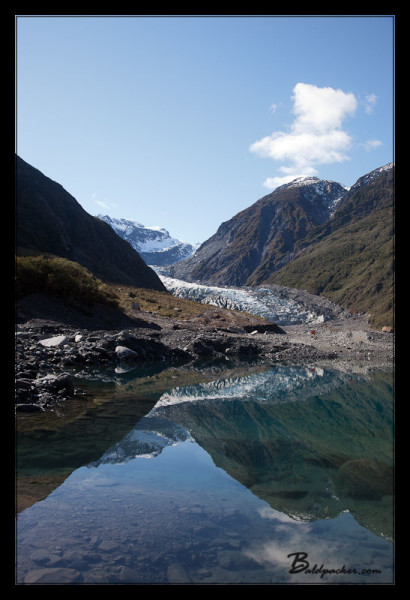 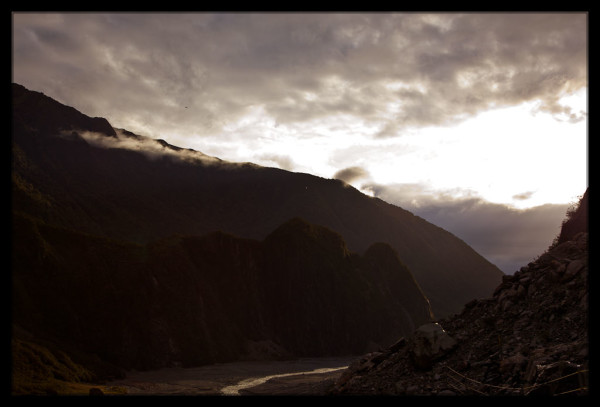 Kea birds are an endemic parrot of New Zealand’s South Island mountain country and their population is estimated at between 1,000 and 5,000 birds. Kea’s are very inquisitive and intelligent which means that, despite their low numbers, it is very common to see them in New Zealand’s alpine. I found it amusing that the Keas were jumping around on the roofs of cars in the parking lot, but I what I didn’t realize is that it is a very common for them to eat the plastic and rubber weather stripping around vehicle windows. It is actually a very big problem and I noticed that the weather stripping on our rental vehicle had also been chewed on! 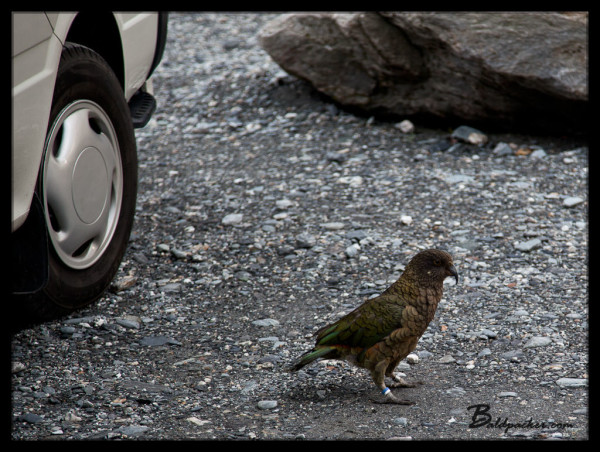 By the time we reached the exit to Franz Josef glacier it was dusk and the rain had picked up so we decided to continue on to Chateau Franz Backpacker Motel where we had booked the “Love Shack” for only $44. I quite liked the hostel as it was quite big, had a good kitchen area, and they even offered us free soup that evening. The only negative was that I realized I was double charged for the room as the fee had already been taken off my credit card and they charged me again when we checked-in. I believe it was an innocent mistake, but something to watch out for when booking hostels in advance online.

The hostel features a hot tub but Sara and I were more interested in hot showers, doing laundry, catching up on e-mails, and getting a good night’s rest. All went according to plan until we were awoken by a lightning, thunder, high winds, and a very hard rain storm in the middle of the night. Around 3am, we then heard a very loud alarm from what sounded like an air raid siren. My first semi-conscious thought was that there was a rock slide or avalanche headed towards us from the mountains. Gaining proper brain function, I realized there would never be enough time to trigger an alarm for those types of disasters and it had to be something else. The next day Sara and I learned that in all likelihood Franz Josef operates a volunteer fire brigade and the siren was used to wake up the volunteers. I assume that either a tree had fallen in the storm or perhaps power lines had come down, but in any event, it was a wild night in the Love Shack! 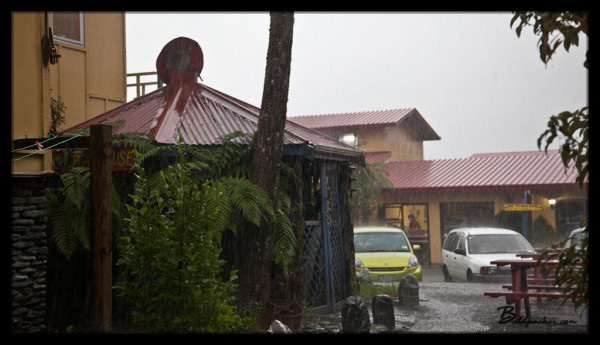 The next morning we slept in a little later than planned as it was still raining extremely hard outside. In fact, it rained so hard that we also decided to have a very relaxed breakfast and coffee so we could pack the car without getting absolutely soaking wet. When the rain finally broke we quickly drove to Franz Josef Glacier. Unfortunately, the rain started again just as we arrived but we still did the hike to the glacier anyways, getting soaking wet in the process. Just as with Fox Glacier, I was disappointed in how Franz Josef looked in the Fall compared to the Spring, but at least we were treated to a nice waterfall and got some exercise along the way. 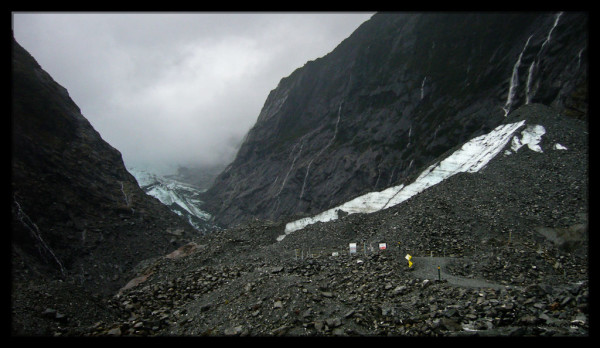 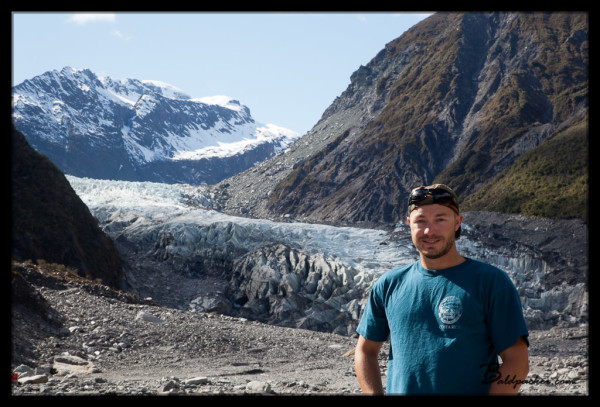 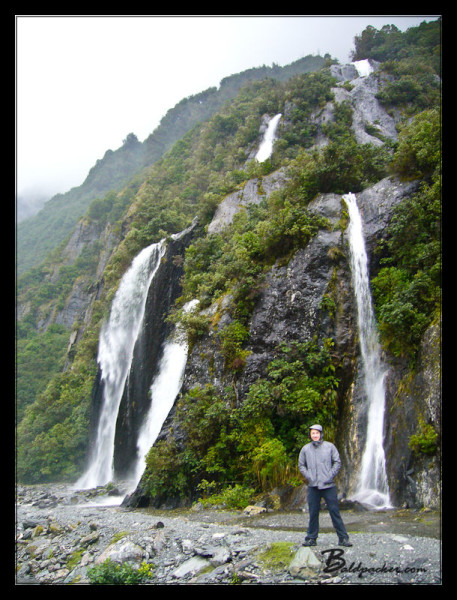 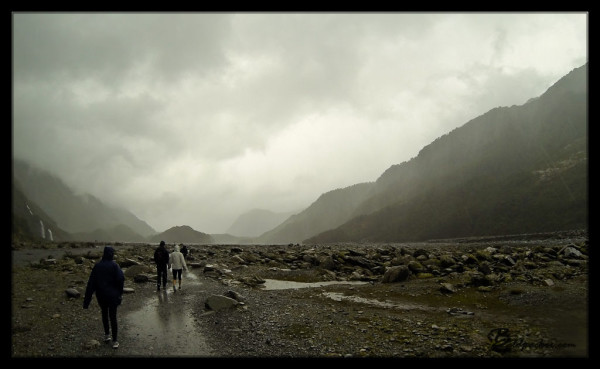 From Franz Josef Glacier we started the long drive to Arthur’s Pass, where we had hoped to do some hiking. The first hundred kilometers of the drive proved to us just how devastating the previous night’s storm had been. We saw several power lines and massive trees which had recently fallen as well as a number of areas where the rainfall caused rock and mud slides. We were very lucky that we had stayed in Franz Josef that night as we discovered that the highway behind us, towards Haast, was even closed that day!

Luckily, the further North we drove along the West coast the better the weather became and by mid-day we had beautiful blue skies. In Ross, we stopped for lunch at the Roggy Nugget Café & Bar, a very unique small town bar that appears to cater mostly to bikers. It reminded me of a small town American restaurant and to reinforce that Sara and I had hamburgers and milkshakes.

Our next stop after Ross was Hokitika where we walked along the beachfront and stocked up on groceries for our two nights in Arthur’s Pass. I also managed to find a very comfortable chair built from drift wood in front of one of Hokitika’s bars where I was able to relax for less than a minute before realizing we had to get on our way to Arthur’s Pass. 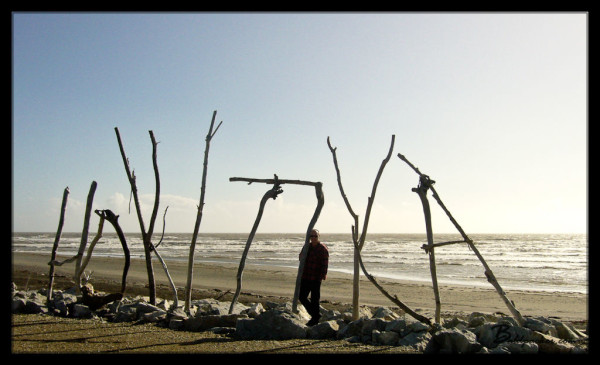 Guess Where This Beach Is? 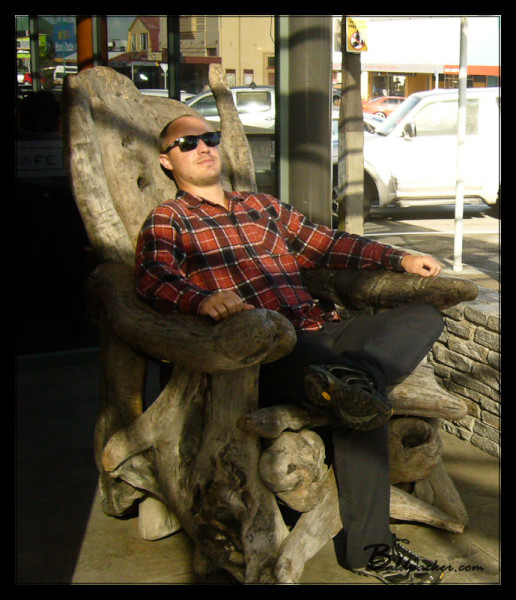 I must admit that I found the West Coast, including Fox Glacier and Franz Josef Glacier, far more impressive in the Spring than in the Fall. That said, it is still a beautiful and unique part of New Zealand’s South Island and is well worth the drive if you have the time.

1 Comments on “New Zealand: Franz Josef and the West Coast”