Most people will arrive in Thailand through Bangkok, Thailand’s capital city, which hosts over 11 million people. The first few times I arrived in Bangkok I found the city loud, polluted, and hectic, but after I was forced to spend over a month in Bangkok while awaiting a new passport, I realized that Bangkok can be an amazing city if you give it a chance. In fact, I love Bangkok so much that I decided to fly in for just 12 hours to celebrate my 30th birthday. 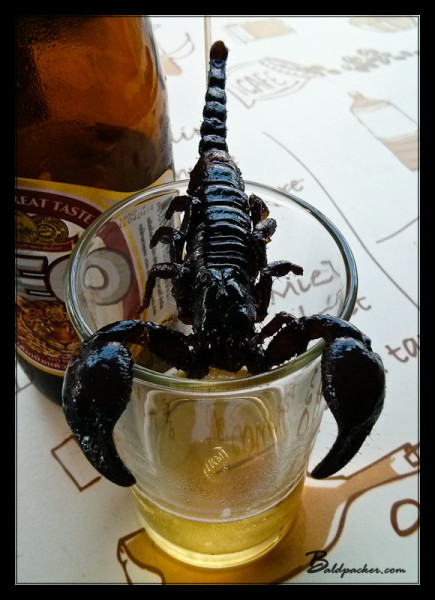 Many people get in and out of Bangkok as quickly as possible to seek the tranquility of Thailand’s jungles to the North or beaches to the South, but despite Bangkok being a large and busy city, I would suggest giving Thailand’s capital a few days if you have the time.

The main backpacker area is Khao San Road (many tourists pronounce Khao as “Koh”, but the proper pronunciation is “Cow”). I would consider Khao San Road to be backpacker Mecca and it is a place that I hate to love. It is loud, brash, and full of drunken foreigners acting in a manner completely opposite to that of Thai culture, yet I always have an amazing time there. The people watching is unreal and Khao San is a one-stop shop for delicious food, cheap clothes, every type of bar you can imagine, and lots of other foreigners (or “farang” in Thai) to meet and swap stories with. Furthermore, it provides some of the cheapest accommodation in Bangkok and lots of travel agencies to plan and book your next destinations through. A fun fact is that ‘Khao San’ actually means ‘milled rice’ and it speaks back to the historical role of the Khao San area in the rice trade. Historically, travelers were allowed to sleep on the rice bags in the warehouses which led to guesthouses opening and then larger hotels and finally the crazy backpacker Mecca that Khao San has now become. I always love returning to Khao San for shopping, people watching, and a cold bee. I have also celebrated the Songkran water festival on Khao San Road and always seem to have a fantastic time. It is also worth wandering off Khao San Road to the streets running parallel to it as there are lots of great shops, bars, restaurants, and places to stay there, as well as in the larger surrounding area of Banglamphu. 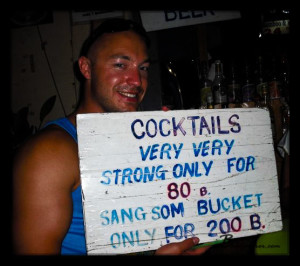 Khao San Road is a Good Place to Get Loose

Other districts potentially worth checking out in Bangkok include:

Siam Square – a more up market commercial area with fancy malls and hotels.

Sukhumvit – a popular expat area filled with hotels, restaurants, and nightclubs. Soi Cowboy is one of the dirtier / sleazier parts of Bangkok, but hey, some people are into that kind of thing…

Silom – mellow during the day, Silom lights up at night and areas like Patpong can really come alive, though parts of Patpong are quite seedy as well.

Rattanakosin – this is the “old Bangkok” and is where you’ll find the Grand Palace and Wat Pho.

For culture and history, it may be worth checking out the Grand Palace, Wat Pho, and Wat Arun. Be sure to check the dress code and bring lots of water as it can be quite hot walking around sightseeing in these areas.

If you are looking to escape the heat or are in need of some new cheap threads, MBK is the place to be. MBK is a massive mall with shops selling everything from new clothes and electronics to their knock-off counterparts. You’ll find both cheap and quality knock-offs of designer electronics, clothes, purses, and makeup. Most of the same wares are available on Khao San Road, but MBK is air conditioned which can be a welcome relief from the heat. 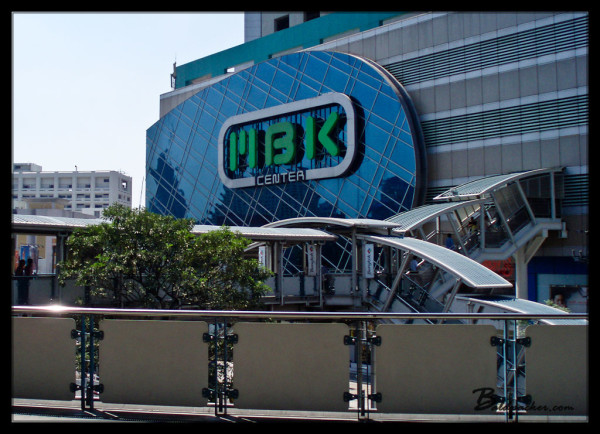 Movies in Thailand can be a lot of fun and many of them are either shown or subtitled in English. Often, theaters will offer “VIP” seating complete with food and beverage service throughout the movie. Some theaters will even sell or deliver beer during the movie.

Muay Thai fights occur all over Thailand, but the more professional bouts happen at Lumpinee Boxing Stadium in Silom and Ratchadamnoen Stadium in Rattanakosin. Foreigners get a special treatment and usually have to pay 1,000 – 2,000 baht to get in, whereas Thais generally pay less than 100 baht. On Wednesdays, there are often free fights outside of MBK which is a nice budget option for seeing live traditional Muay Thai boxing. 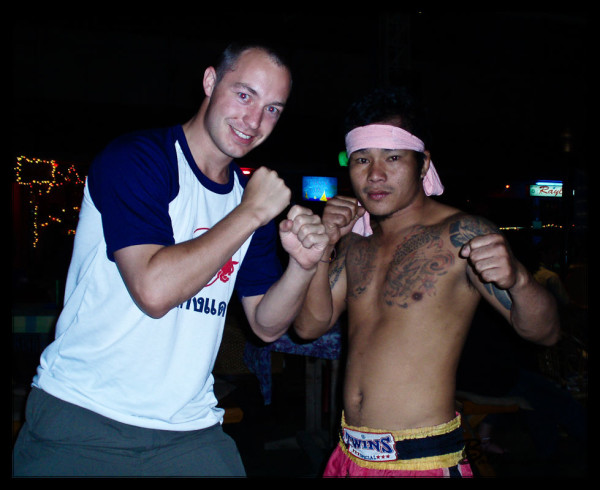 Bicycle tours are a great way to get around and see the sights while sweating out the toxins of a hard night on Khao San. There are many companies that offer cycling tours, but I have been lucky enough to stay with local expats who have been able to lend me a bike and guide me around. I especially enjoy cycling the Khlongs, which are the canals that have given Bangkok the nickname of the “Venice of the East”. 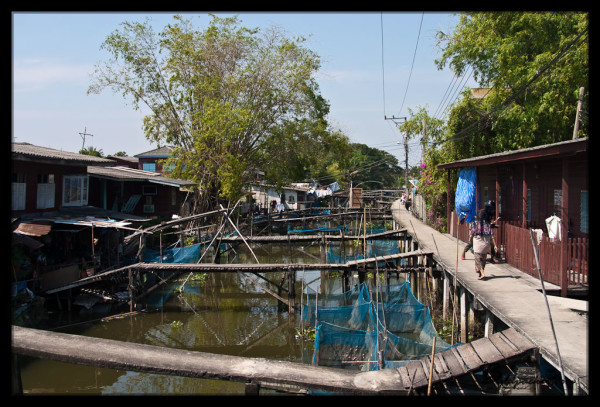 There are several cooking schools in Bangkok, but they can also be found in other touristy areas. I have not done a cooking school in Bangkok myself, but thoroughly enjoyed the experience in Chiang Mai. 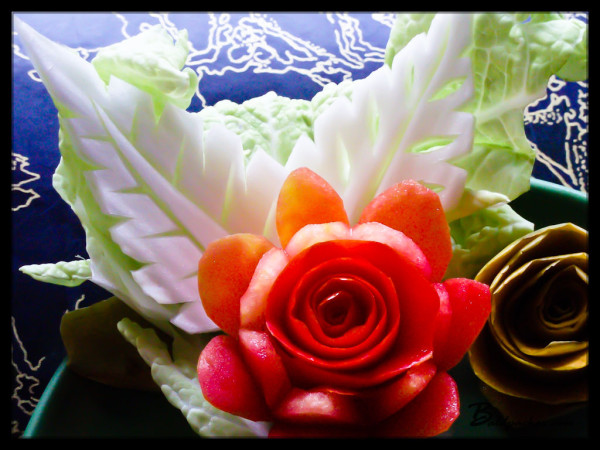 Bangkok is a great city to really indulge in luxury hotels, meals, spas, and clubs as they are fantastic value. People often go into extreme budget mode while backpacking through Thailand, but I would encourage everyone to go out with the mindset of spending the same as you would at home and just see how far that money can get you! It is often possible to find very cheap (legitimate) massages for 200-400 baht per hour, though do not expect the girls to necessarily have any proper training as sometimes the massage is little more than an oily back rub. Ask others for recommendations and if you find a place you enjoy, do not hesitate to go back each day and ask for the same masseur. Another great experience is to visit one of Bangkok’s many sky bars. Most of these sky bars have a dress code of long trousers, closed shoes, and long sleeves for me, but they provide fantastic views and exceptional service. From low-budget to high-end, Bangkok has something to suit everyone and it is worth giving the city a chance.

Bangkok has loads of transportation options and most are worth experiencing at least once.

Tuk-tuks are great for short journeys but tend to be a hassle to negotiate. Do not ask tuk-tuk drivers or taxi drivers for recommendations for anywhere to shop, drink, or eat as they will almost always just take you somewhere that they will receive a commission.

Taxis can be wonderful provided traffic isn’t bad although the drivers can be rather chaotic, so wear your seat belt. Always insist on using the meter with taxis and try to avoid those that are parked waiting for tourists, as they tend to be the ones just waiting around to try and scam a high price. If the driver asks whether to use the toll-road or not, I would almost always recommend you say yes. He will likely pay the toll as you drive and then add it on to the final fare.

The MRT is a convenient way to get around the city provided your final destinations are near the transit line and is one of my preferred ways of getting around for a full day of sight seeing.

Canal boats are cheap and can be very fast depending on where you want to go, as they’re able to avoid Bangkok’s often congested traffic.

The two forms of transport I usually avoid are motorcycle taxis and buses. There is so much traffic and chaos in Bangkok that motorcycle accidents are very common and thus a ride is usually not worth the risk. Laws require that both driver and passenger wear a helmet so if you are going to risk your life on a moto, at least put a lid on it. Bus routes in Bangkok can be terribly confusing to understand and many buses are not air-conditioned, making them very uncomfortable in the heat. The exceptions to this are the express buses from the airport, which can provide a good travel option depending on traffic and your final destination.