On the second day of our trek, our entire group was complaining of the cold the night before and I think Sara and I were likely amongst the warmer people in the group thanks to our extra sleeping bags. Fortunately, everyone survived the night (though some would argue they only barely managed to do so) and everyone managed to laugh about the absurdity of it all, even though it was obvious that no one had slept very well. We ate porridge sweetened with honey for breakfast, along with delicious Ethiopian coffee, before setting off towards Imet Go-go. Imet Go-go is an incredible rocky promontory 3,926 meters above sea level (ASL) that offers amazing views across the Simien Mountain range. The altitude made the hiking rather difficult and Chris, a fellow from the UK, decided to hire a mule for the journey rather than suffer for the entire 22 km hike. At 110 birr per day, a mule is likely a good option for those who struggle with altitude or haven’t done a lot of trekking before. The views throughout the entire day were amazing and it was definitely some of the best hiking I’ve done anywhere. There were plenty of sheer cliffs and drops to keep the adrenaline flowing, and those same cliffs are what make the Simien Mountains so unique and spectacular compared to other mountain ranges I’ve trekked. For wildlife, we saw lots of Gelada baboons throughout the day, as well as 3 Wallia Ibex in the far distance as we approached the Chenek Camp (3600 meters ASL). 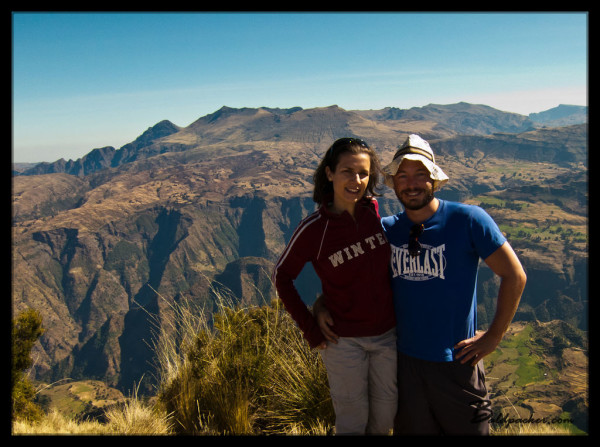 Sara & I Enjoying the View 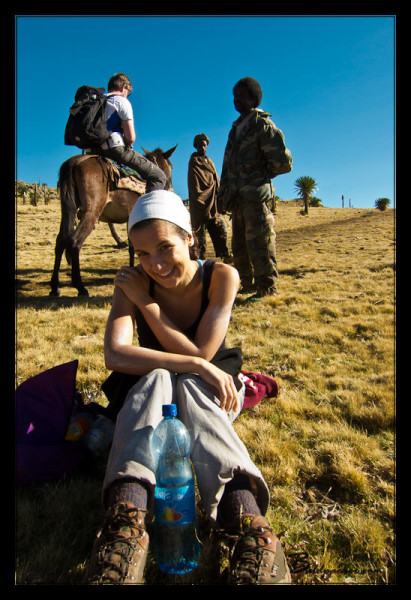 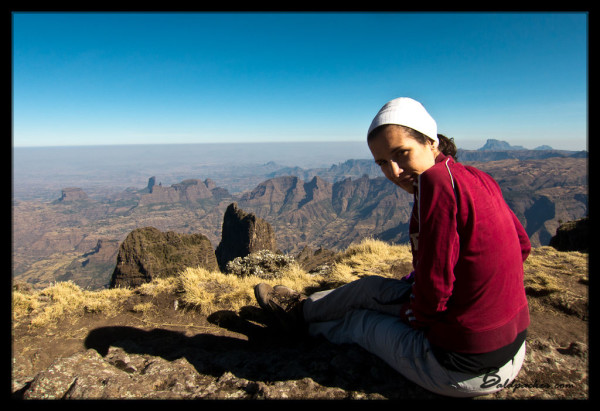 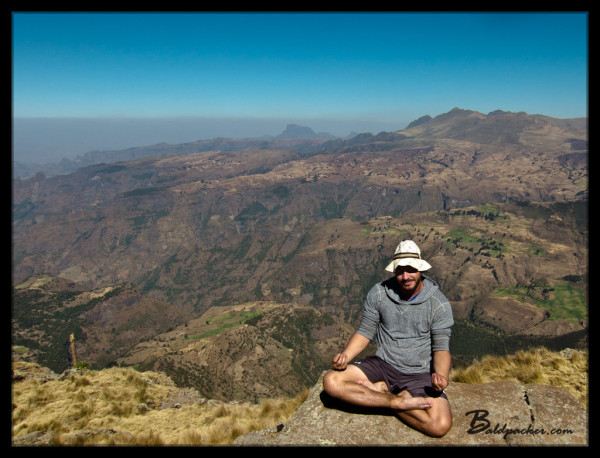 Trying to “Find” Myself 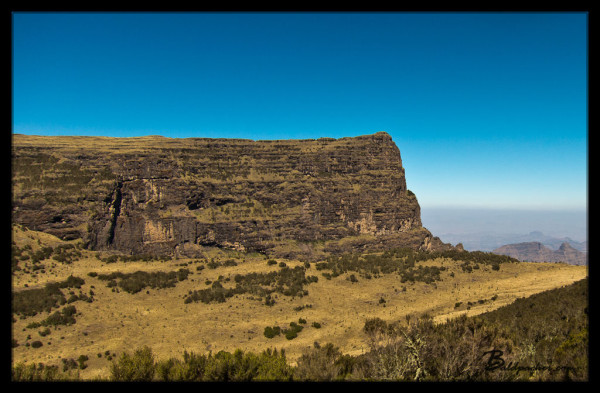 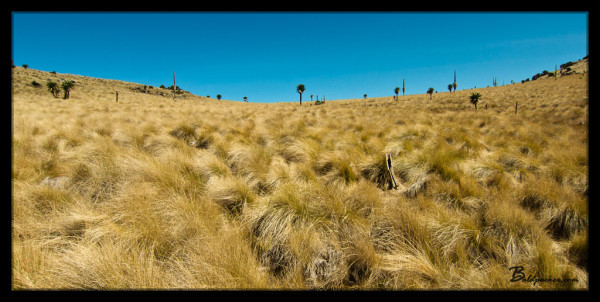 Gelada baboons are only found in the Ethiopian Highlands, at elevations of 1800m – 4,400m ASL, with large populations in the Simien Mountains. Many researchers place Geladas in their own genus, though some believe they’re better grouped with baboons (papionine). Males have a heavy, long, cape of hair on their backs, which make them very unique compared to other baboons I’ve seen in Southern Africa. Their other distinguishing feature is an hourglass shaped patch of skin on their chest which glows bright red on males and brightens on females when in estrus (in heat). 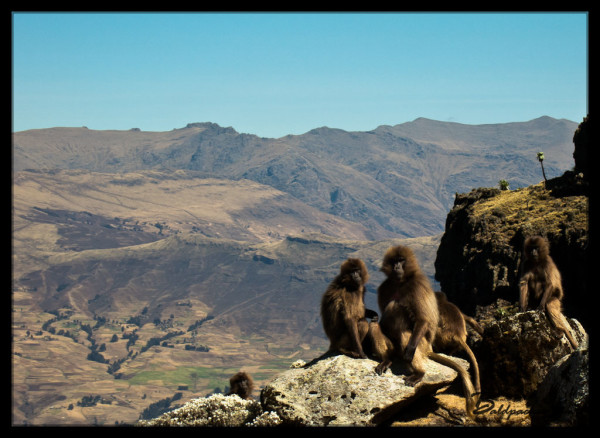 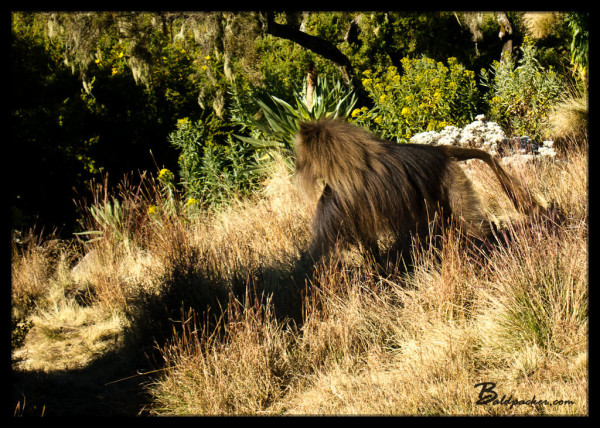 Unfortunately, a few people had a difficult time with the hike to Imet Gogo and Chenek. I think the majority of the problem was due to altitude since we hadn’t had much time to acclimatize, but the hot sun and rough terrain may have also played a part. Luckily both Sara and I had quality footwear for hiking as those with only running shoes struggled to find traction at times, making it an even more difficult day. The views were incredible throughout the day and everyone quickly understood how worthwhile it was to suffer through the cold the evening before. When we reached Imet GoGo, I asked Sonnet, our scout, if I could borrow his AK-47 for a couple photos. I’ve had a few photos with AK’s before and always regretted not going for the Rambo grip, and I was happy to finally get my “Rambo Shot”. 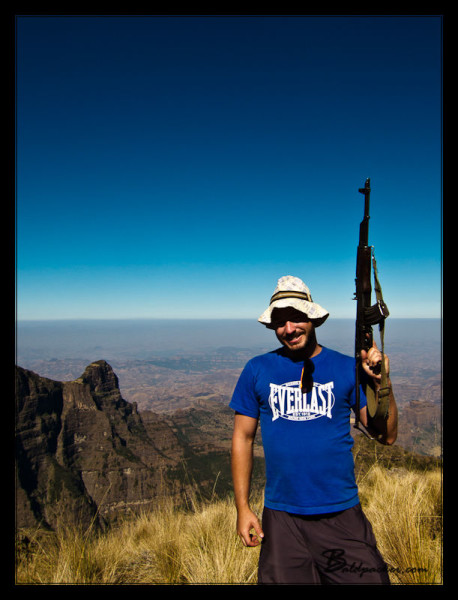 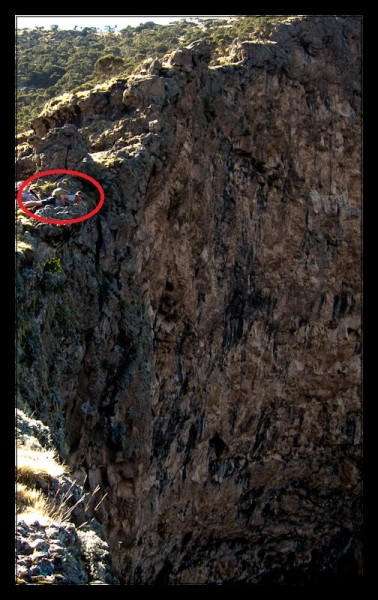 Damien Looking Over a Sheer Cliff 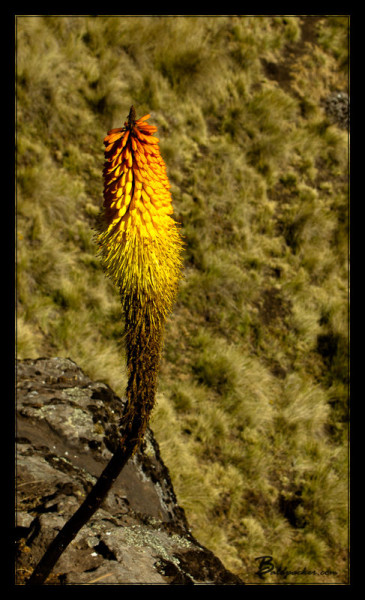 Thankfully, the Chenek camp was much more sheltered from the wind than the camp at Geech, and thus we were all hoping for a warmer night than we’d had the night prior. Sara and I saw the kitchen staff pumping water from a fresh water well, which they then used to fill up a water tank supplying an open air shower at the camp. Even though the water was freezing cold and there was not enough privacy for a full shower, both Sara and I washed our faces, feet, and legs as best we could. Meanwhile, the chef provided the group with tea, popcorn, biscuits, and a delicious mix of roasted seeds. Sara continued to feel nauseous and dizzy from the altitude so she headed to bed before dinner while the rest of us waited until nightfall for a tasty meal of chicken and vegetables. After dinner we were all tired and cold and were told that there would be no camp fire that evening due to a lack of fire wood at the camp.

After everyone being so cold the night before, we had asked Menis, our guide, to look for blankets to hopefully keep people warmer the second night. He did find blankets, but later told us that we had to pay 80 birr to rent them. While it was well worth the price, the cost of borrowing the blankets was the same as the cost of staying in the nearby lodge where he’d borrowed them, making it a complete rip-off. I was even more annoyed by the fact that he did not mention there was a cost to renting the blankets until the next morning, after we’d already used them under the assumption they were free! Even though it was only 7pm, most of us were cold and tired and I decided to go to bed, get warm, and do my best to get as much sleep as I could over the following 12 hours.

Read more about our last day, Day 3 and our trek to Buahit Peak HERE.