The activity I was most looking forward to in Ethiopia was trekking the Simien Mountains. Prior to arriving in Ethiopia I had e-mailed many tour operators and was given a variety of choices for 3-5 days of trekking at prices ranging from US$ 200 – US$ 750. From what I read online, some people recommend going directly to Debark and organizing a guide, cook, scout, mule man, and equipment through the tourist office there while others believed organizing in Gondar was best. Faced with so many different prices and opinions on how to organize, Sara and I decided to simply set aside 5 days for trekking and organize it once we arrived in Gondar.

In Bahar Dir we had met a great group of people which led to us all arriving in Gondar together and staying at the L-Shape Hotel. Immediately upon arrival we met a fellow named Bokata who said he worked for the hotel and began selling us on trekking packages. Although clearly acting as an agent, he seemed like a genuine guy and was quickly selling us on tours at a great price. We also met a couple of people who had just returned from trekking after organizing it in Debark themselves and they recommended we use an agent from Gondar if we could do the trip for US$ 200 or less. They said that by organizing themselves it had cost US$ 160-170, but that they also had to pay for transport to and from the mountains and that the process of organizing was a bit stressful and ate up a lot of time.

The above drawing is courtesy of Christine – read more about her travels on her blog: http://roundtheworldround.wordpress.com/

Sara and I had planned for 5 days of trekking but our group was more interested in 2-3 days in the Simiens. In the end, in order for us to all stay together as a group, we decided to try and complete the 4 day itinerary in 3 days and 2 nights, despite the potential risks of not acclimatizing to the altitude properly. As we had a group of 7 people, we negotiated the price with Bokata down to US$ 170 per person, which we all felt was very reasonable. We also confirmed that the price included the camp, guide, scout, mule man, and cook fees; 3 liters of water per day; good food; sleeping bags rated for the cold; and transport to and from the mountains. Satisfied we had negotiated a good package for ourselves we all paid Bokata a 25% deposit and were told to meet at 7am the next morning.

Sara and I packed everything we needed for the trek into my backpack and put everything we did not need in hers, storing her backpack at the L-Shape Hotel while we were in the mountains. We were picked up at 7am and drove ~3 hours to Debark on a nice asphalt road. In Debark, we signed in at the park headquarters and our guide collected the camping gear as well as our cook and scout. From there, we continued on to Sankabar Camp (3,200 meters ASL) where we would have done a 2-3 hour acclimatization hike and spend our first night if we had chosen the 4 day trip. As we were trying to fit the 4 day itinerary into only 3 days, we instead set off on a ~12 km hike to Geech Camp (3,600 meters ASL), which the 4 day trekkers would head to the second night. Before long, we were at a beautiful view point over Genbar Falls, a small waterfall that drops 500 meters over a sheer cliff. The waterfall created a beautiful rainbow as well as thermals for the birds to ride so it was a wonderful place to stop and enjoy lunch, a tasty egg omelet sandwich. 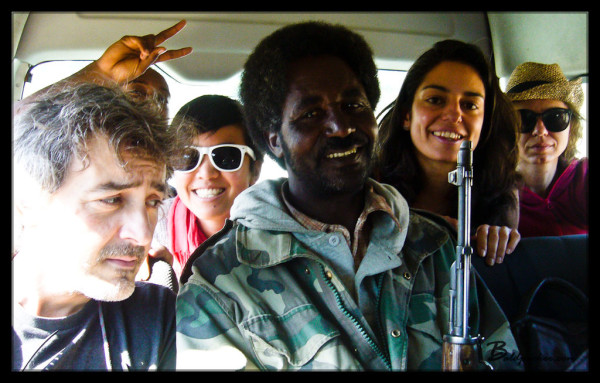 Picking up our Scout – Sonnet – in Debark 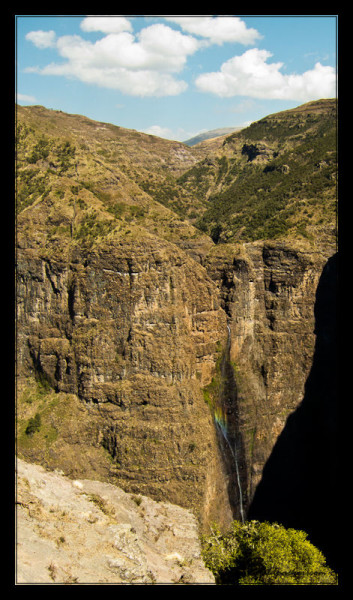 After devouring lunch we continued on our hike, which was relatively strenuous due to the altitude. The trail is well cut and does not involve any scrambling, but I would highly recommend wearing trekking shoes or hiking boots as there are steeps sections as well as areas that are slippery due to the fine, dusty soil. Along the way we stopped at another smaller waterfall where we were able to splash cold water on our faces and snack cookies we had purchased in Gondar and packed in on our own (no snacks were provided by our tour operator for while we trekked).

When we finally arrived in the town of Geech it was already nearly dusk, but our guide said we had time to stop for a traditional coffee ceremony offered by a local woman (at a cost of 200 birr to the group). It was late in the day for coffee but it seemed like too good of an opportunity to pass up so we entered a small smoky hut where an older woman was preparing a fire. As she roasted the coffee (coffee is “bunna” or “boo-na” in Amharic) beans over an open fire we snacked on a tough injerra made of barley dipped in a delicious spicy hot sauce.

Ethiopian coffee ceremonies involve a woman washing coffee beans and roasting them in a pan over an open fire or coal furnace. The beans pop like popcorn as they roast and once the beans are adequately smoking the woman will walk the pan around the room so everyone can breathe in the amazing roasted coffee smell. Once roasted, the coffee is put in a ukecha (moo-ke-ch-a) for grinding. The mukecha is essentially a mortar and pestle and the coffee is crushed into a fine powder before being placed in a pot called a jebena (j-be-na) where the grounds are boiled with water. Once ready, the first serving of coffee, called “Abol” is enjoyed. This is followed by a second and third serving called “Huletegna” and “Bereka” respectively. The second and third servings are not as strong as the first and I found each serving to offer a different flavor profile (each cup was delicious). 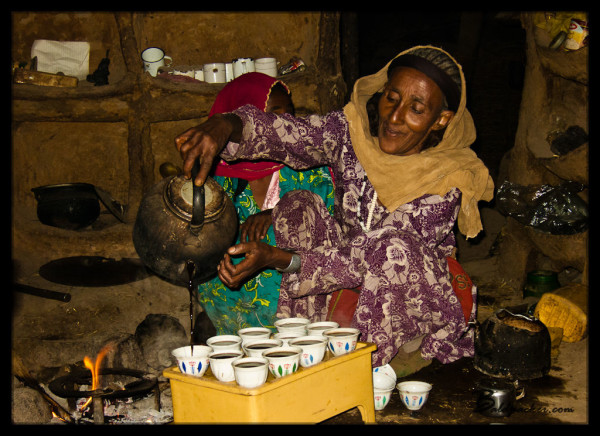 The atmosphere during the ceremony was incredible as smells of smoke and roasted coffee filled the air, chickens and young cattle wandered freely into the hut, and the setting sun dimly lit the dark interior of the adobe built home. The whole ceremony was very enjoyable and the coffee gave me the late afternoon energy boost I needed after a hard afternoon of trekking. As we left the small hut the sun was setting and the sky was filled with brilliant colours, signing an end to both our trek and the day. As we completed the last stretch of our hike to the Geech camp site, we passed many Geech locals returning to town with sheep and cattle that had been out grazing during the day. When we finally got back to camp it was already dark, but thankfully our luggage had arrived and all of our tents had already been set-up by the porters. The temperature dropped quickly after the sun set and soon most of our group had put on every layer of clothing they had brought to fight the bitter cold. I tried to wear sandals and shorts and try to tough it out, thinking my Canadian blood would keep me warm, but even I relented to putting back on my hiking shoes and all of the warm clothing I had. Be aware, it’s very cold in the Simiens at night! 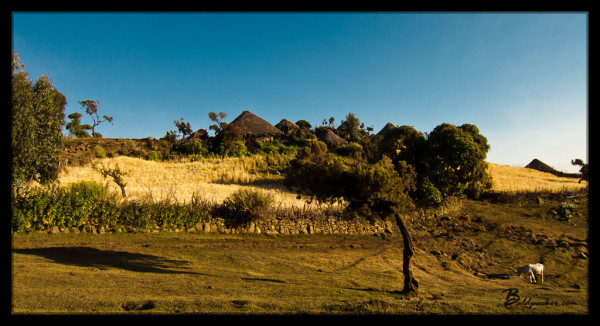 Dinner was a tasty vegetable soup followed by cooked vegetables and al dente macaroni. Though delicious, it was a real struggle to eat as my hands froze in the cool evening wind. The suffering from the sub-zero temperature was only broken by the brief joy of a fellow arriving with St. George beers (25 birr each) while the dark sky was filled with bright and vibrant stars. After dinner, the cook’s helpers started a fire inside the cooking hut and the heat from the hibiscus wood fire gave relief to our frozen hands and toes. Unfortunately, the hut was not well ventilated and before long the dense smoke stung our eyes and burned our lungs to the point where we decided it was time to leave the warmth and try to get some sleep. We made our way to our tent where we discovered the sleeping bags provided by our trek organizers were better suited for equatorial beach temperatures than those of the frigid mountains, making Sara and I very thankful that we had brought out own light sleeping bags to put inside the sleeping bag we were provided. Even with two sleeping bags each, it was still very cold and both Sara and I found it difficult to get much sleep given the temperature and altitude.

Read more about Day 2 and our trek on to Chenek HERE.