One of the best groups of people I ever met was a group of Canadians and Australians staying at the Rising Cock Hotel in the Algarve of Portugal. I was extremely happy when I was able to reunite with several members of the Australian crew members for a week of celebrating the Melbourne Cup horse races and a five day Cricket test match between Australia and Sri Lanka at The Gabba in Brisbane.

Tez picked me in Byron Bay and drove me to his hometown of the Gold Coast for the Melbourne Cup. Of course, the Melbourne Cup is all about dressing to impress so on the way we stopped at a thrift shop to pick-up something classier than what I had in my backpack. 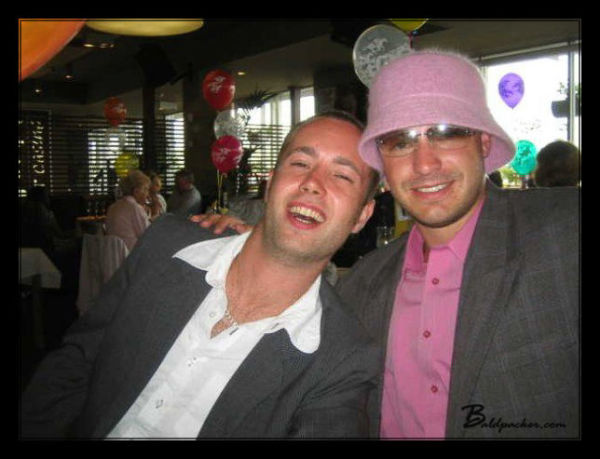 We started our Melbourne Cup celebration off at a beer bar that stocked beers from all over Australia. Tez and his group decided that we should try to drink our way “around Australia”, beginning in Tasmania. I can’t recall how far we made it but it couldn’t have been very far as there were at least six different Boags and Cascade beers we had from Tasmania before moving on to continental Australia.

The horse racing was a ton of fun and Tez and his friends kept getting SMS tips from friends at the track who believed to have an inside scoop. Our bets paid off well enough to cover most of our bar tab which was definitely good enough for a backpacker on a budget like me!

Tez also arranged a fancy afternoon event for us that included loads of free champagne. It was wonderful seeing all of the women dressed up so nicely and I especially enjoyed it when I was invited to take part in the “best-dressed” competition in my $20 thrift shop clothes. In fact, there were photos of our group in a local newspaper the next day!

One of my favourite parts about the Gold Coast is that they have free electric BBQs in some public parks. The morning after the Melbourne cup we were all in need of a greasy breakfast so we picked up eggs, bacon, and sausage and had a delicious fry-up while overlooking the ocean. I cannot think of any better hangover cure than that!

After recovering from the Melbourne Cup chaos a large group of us drove up to Brisbane to watch cricket at The Gabba. Tez’s cricket team was there and our group was big enough that we took over the top few floors of the Oaks Hotel.

What happens at The Gabba stays at The Gabba so I won’t go into further details except to say that it was an unforgettable time. The Melbourne Cup and Cricket are definitely big parts of Australian culture and I was thrilled to have such an awesome experience for both!