Sara and I planned to drive from the Great Ocean Road to Adelaide so we decided to spend a couple of nights in Grampians National Park on the way. It was a rainy day for our drive to Halls Gap so on the way we stopped at the Warrnambool Cheese and Butter Factory for a tour and cheese tasting. While there we explored their cheese museum, sampled a number of delicious cheeses, and purchased some blue cheese, a bottle of local wine, and parsley and pistachio pesto for that evening.

The Silverband Falls offered a nice opportunity to stretch our legs but I would not consider it a very impressive waterfall. More impressive was the troop of kangaroos we saw just off the highway in front of the Grampians Motel. The kangaroos were clearly used to people as we were able to approach quite close and watch them feed themselves and their joeys. 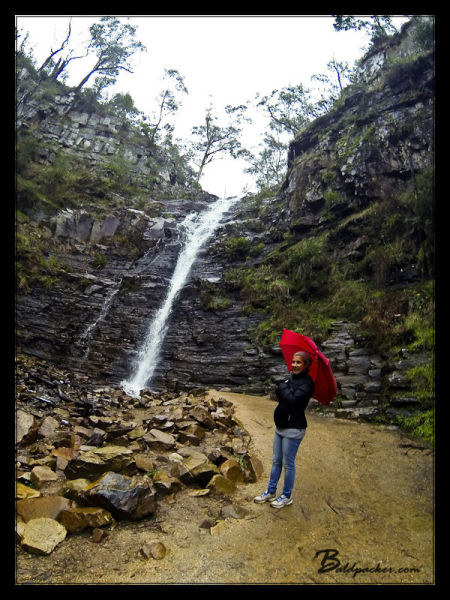 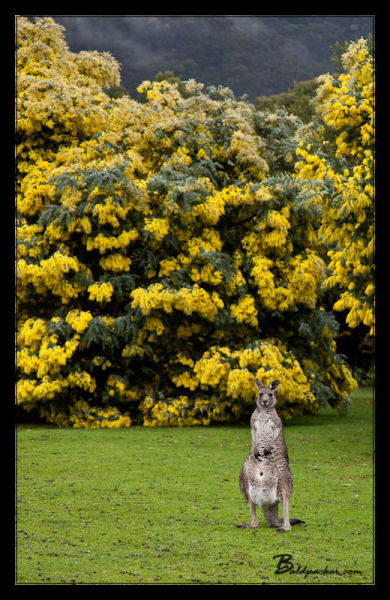 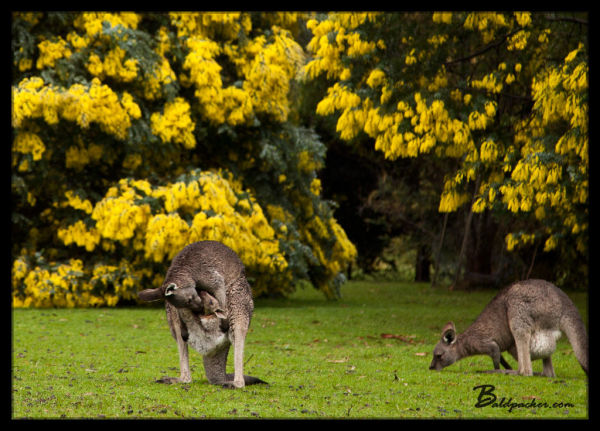 We then proceeded into Halls Gap and to our accommodation at Tim’s Ecolodge Backpackers. Unfortunately, the weather was still miserable so Sara and I sat in the car contemplating if we even wanted to stay in the Grampians at all when Tim came out to say hello. Tim is a genuinely nice man and immediately said that he would understand if we decided not to stay but that he expected the weather to clear up the next day. After further thought we decided that Tim seemed like a great host, the backpackers was nice and inviting, and that we may as well take our chances on the weather.

I would highly recommend Tim’s Ecolodge Backpackers to anyone staying in the Grampians. Besides being a friendly and welcoming host, Tim offers free plunger coffe, wireless internet, mountain bikes, and very comfortable eco-friendly accommodation. After we checked in Tim suggested that we go to the Brambuk Aboriginal Center and do one of the many short interpretive walks before the sunset. The walk was great and we saw many big and beautiful trees, emus, and kangaroos. The Tourist Information and Aboriginal Center were also nicely laid out and filled with useful information about things to do in the area.

The next morning the clouds were still around but we wanted to go sightseeing anyways. We drove to Boroka Lookout first but were disappointed to find the entire valley under cloud. 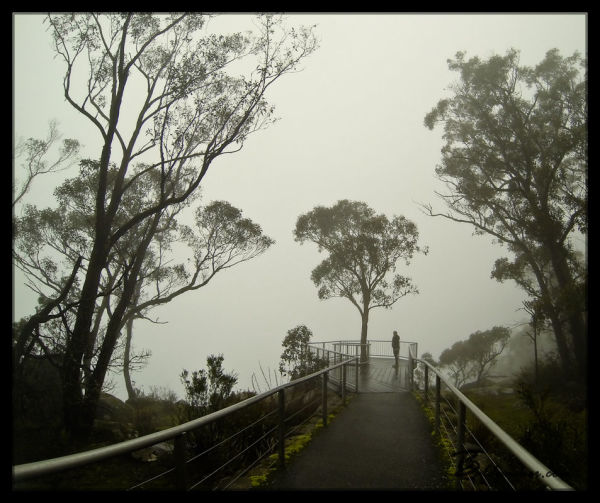 Sara had researched a number of hikes and suggested The Pinnacle would be a good option even with the clouds. I must say, she was completely right and The Pinnacle has become one of my favourite short hikes in the world. We followed the well-built trail to a nearby waterfall and then through the “Grand Canyon”, a very impressive rock canyon that offers a fun walking experience, even in the cloud. 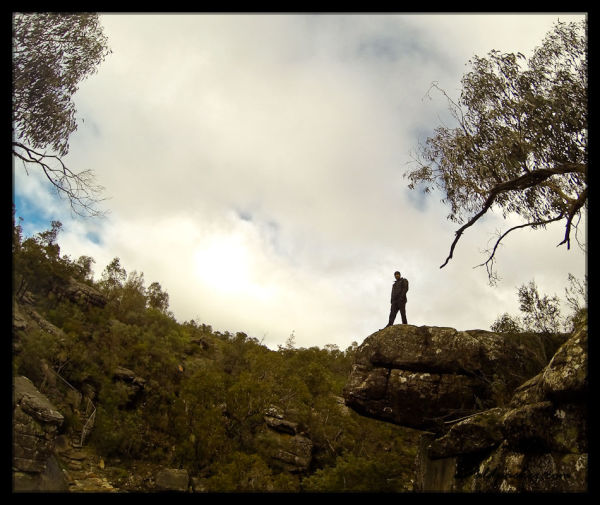 King of the Rock 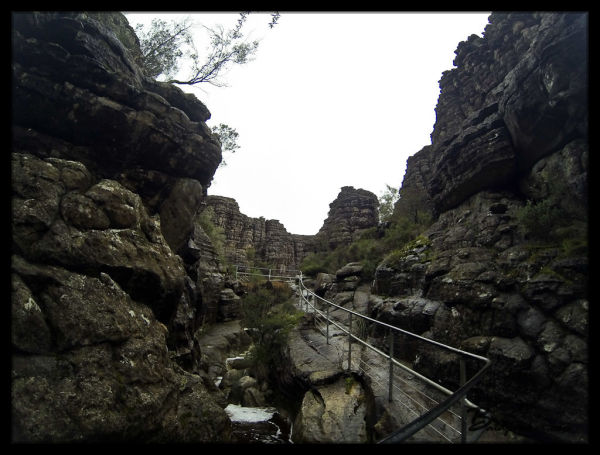 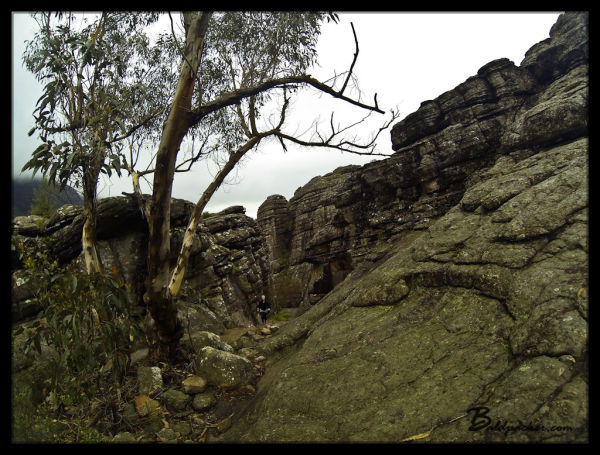 When we finally reached The Pinnacle the skies had opened up slightly and we were treated to amazing views from the constructed platform. I imagine The Pinnacle’s rocky trail may get slippery in heavy rain, but I would recommend the hike to anyone in the area as it truly is a magnifiscent trail. 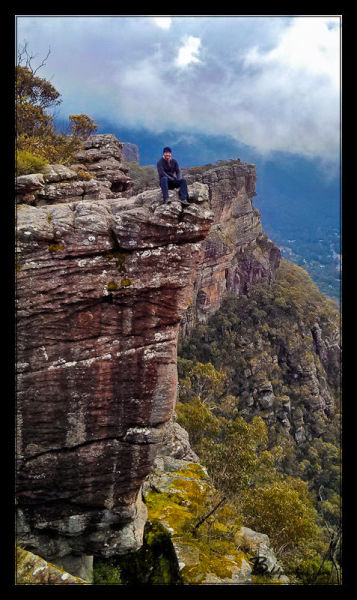 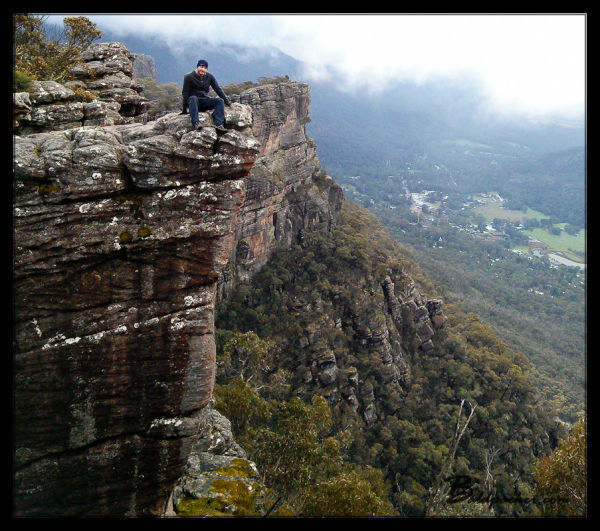 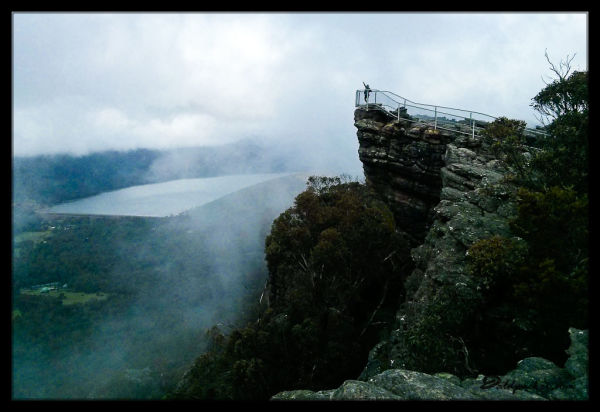 Sara Enjoying Views From The Pinnacle

After we returned to the Wonderland parking lot at the base of the Pinnacle we decided to drive to nearby Stawell for groceries. Amazingly, when we reached Stawell the sun was bright and the sky was blue. Clearly the mountains of the Grampians attract the clouds! Stawell is a cute little town and the best place for shopping near Hall’s Gap.

After returning to Halls Gap the cloud cover seemed to have lightened up a little bit so we drove the long winding road to Reed Lookout, the Balconies, MacKenzie Falls, and back to the Boroka Lookout. Unfortunately, a wildfire recently tore through the area around MacKenzie Falls so the access road was closed, but we were still able to see the impressive falls from the highway and were also finally treated to views from the Boroka Lookout. 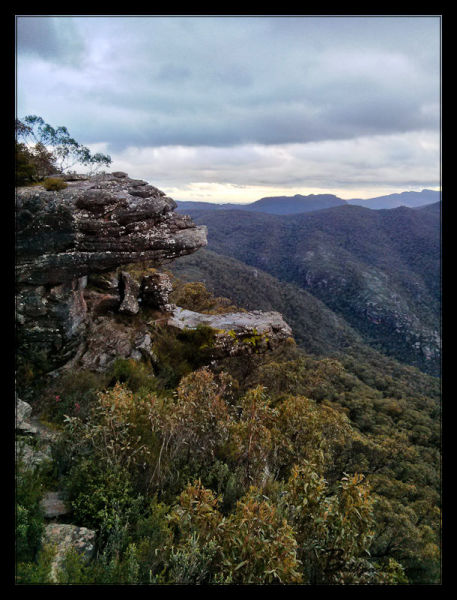 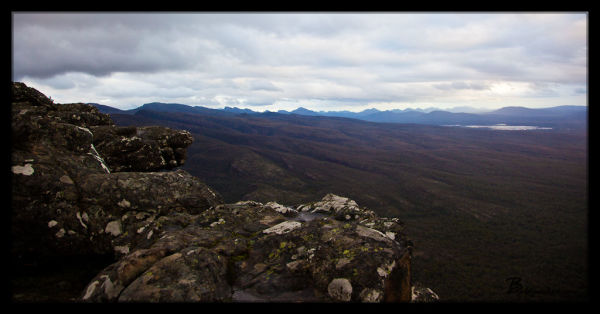 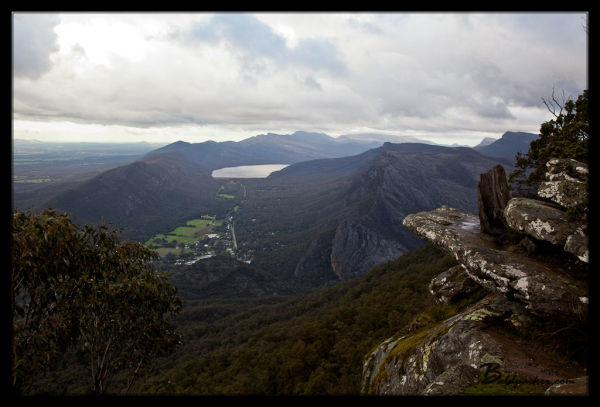 Despite the weather, Sara and I had a wonderful time in the Grampians and I would highly recommend a visit to anyone who enjoys the mountains. The Pinnacle walk is worth the drive alone and I would love to return one day to do it again when the skies are blue and the sun is shining.