I have always heard great things about Melbourne and was really looking forward to visiting the city. People have always told me that Melbourne is the “Cultural Capital” of Australia and that I could expect lots of wonderful coffee shops, independent restaurants, live music, and unique bars. After a few days in Melbourne, I would agree with all of these statements and would describe Melbourne as the love child of hipster Brooklyn, architectural London, and caffeine crazed Seattle. 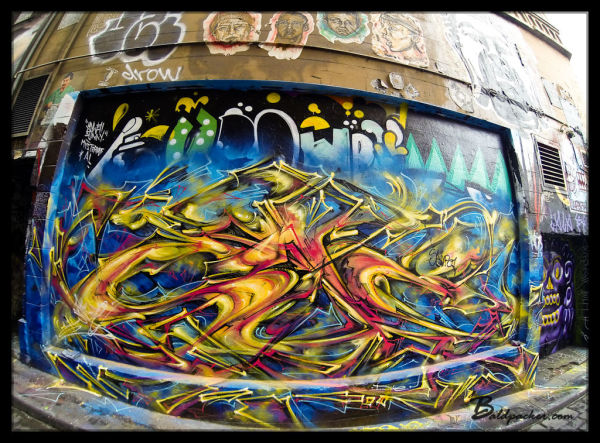 Even though Melbourne lived up to all of my expectations the thing that surprised me most was its size! I had no idea that Melbourne was a city of over four million people sprawled across nearly 10,000 square kilometers of land. Despite the massive size of the city, the public transportation system is excellent and provides easy access to most of Melbourne, including its suburbs.

My good buddy Tom, who I met in Poland and have since partied with in England and Canada, now lives in Melbourne with his wonderful girlfriend Christina. Tom and Christina were gracious enough to host us in their guest room in Essendon during our stay. This was especially wonderful since the weather was horrible when we arrived and Tom and Christina’s house was a very comfortable place to hide from the cold and wet weather. That evening we went to the Sporting Globe, a massive sports bar, to watch the last game in the State of Origin series, an annual best-of-three rugby series where players from New South Wales and Queensland play for the teams based on where they played their first senior rugby league game. New South Wales had already secured the 2014 series by winning the first two matches, but since Queensland had won the previous eight years there was a lot of pride on the line in the final game. Sure enough, Queensland managed to pull out the win while we enjoyed good food and delicious beer at our table.

The next day, when the weather finally improved, Sara and I set out to Flinders Station to meet Janina, a very friendly German girl we had met on our Ayers Rock tour who was living in Melbourne. Her friend, Ruth, a graphic designer who was visiting from Germany, also joined us. 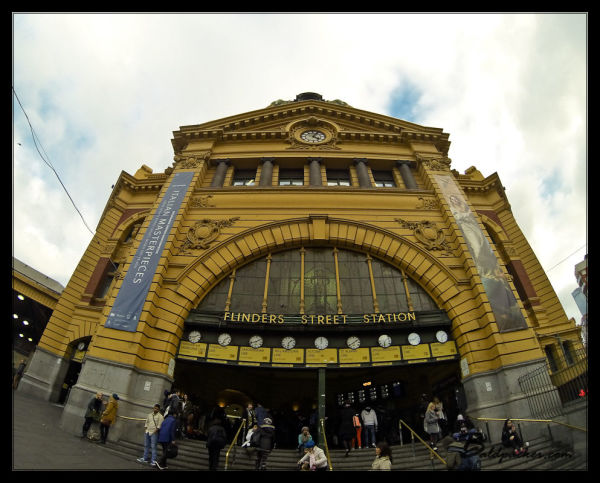 Our first stop from Flinders Street was the Eureka Tower, a 297 meter (975 foot) Skyscraper. The Eureka Skydeck 88 is, you guessed it, on the 88th floor and offers the paying public wonderful views out over Melbourne. Despite the steep admission fee of $19.50, it was a great way to see Melbourne from above. There is also and “Edge Experience” which is a glass cube that extends 3 meters out from the building. The cost for the Edge was an additional $12 and there was a 45 minute wait when we were there so I used that as an excuse not to do it. It was neat watching the glass cube extend out from the building next to the outdoor viewing platform though! 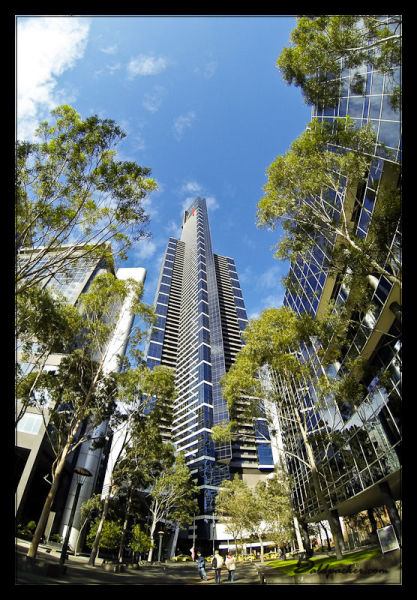 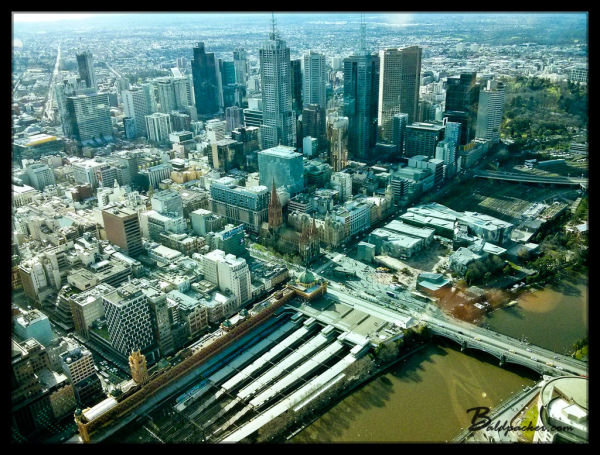 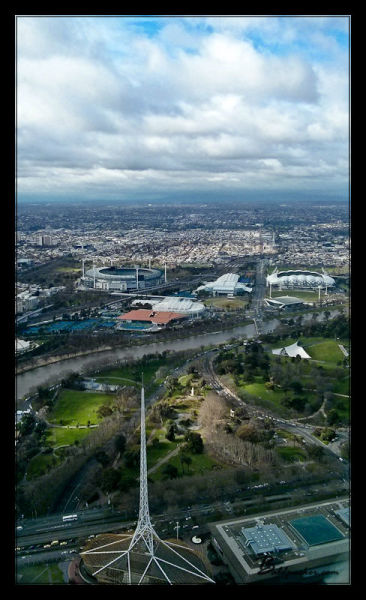 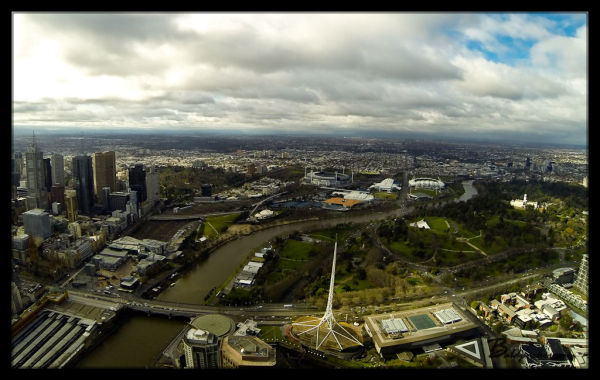 After returning back to street level we walked along the South Wharf Promenade past the casino and convention center until we reached South Wharf Drive and Dukes Walk, which are lined with restaurants, cafes, and bars. Interestingly, after passing a number of signs on the promenade Ruth told me that Melbourne had won a number of design awards for its personalized logo and typography which just proved to me how much the city council embraces and encourages art and culture. 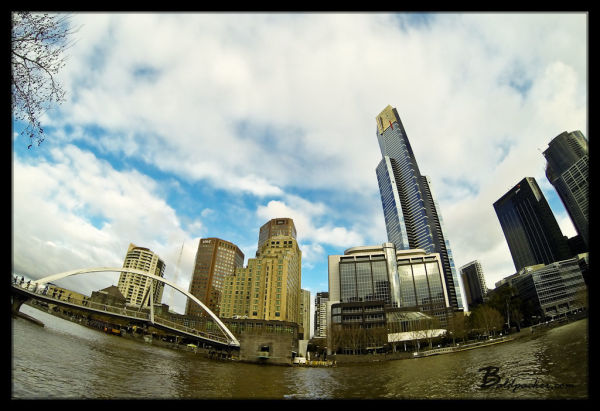 We had a difficult time choosing which of the many enticing restaurants to go to for lunch so after several coin flips we ended up inside the Meat Market, an open kitchen concept that displayed a number of fresh meat cuts. Lunch was wonderful but sadly Janina and Ruth had afternoon appointments and Sara and I were left to explore on our own.

We crossed the Yarra River and walked back to Flinders Street through Batman Park. Melbourne’s founder was named John Batman so Batman is a name commonly seen throughout the city. We continued past Flinders Station to Hosier Lane, a pedestrian laneway filled with street art. Interestingly, Melbourne approves of street art (stencils, paste-ups, and murals) and permits street art with building owner permission. They City of Melbourne does state that graffiti and tagging are illegal, but thankfully most laneways are filled with enjoyable, family-friendly artwork and we were lucky enough to see two artists completing a mural while we were there. Along with Hosier Lane, the city recommends the following locations for street art: 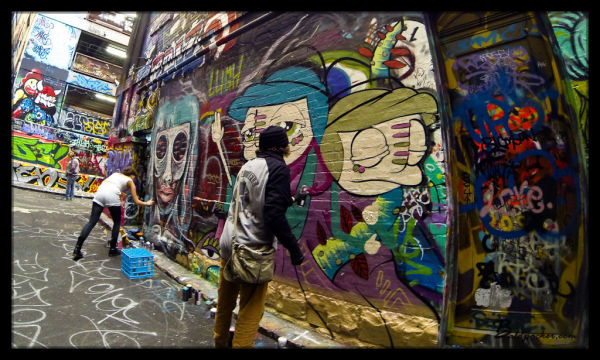 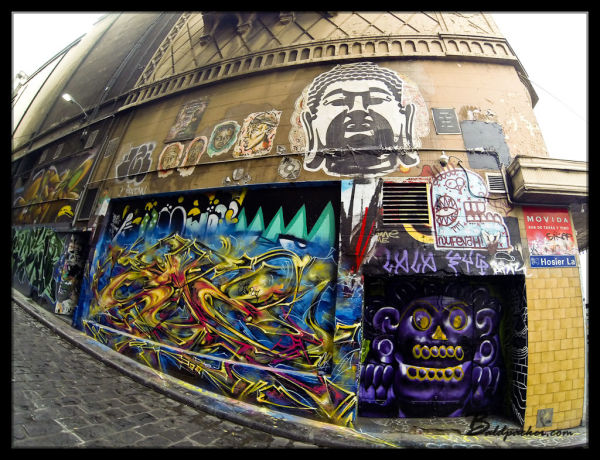 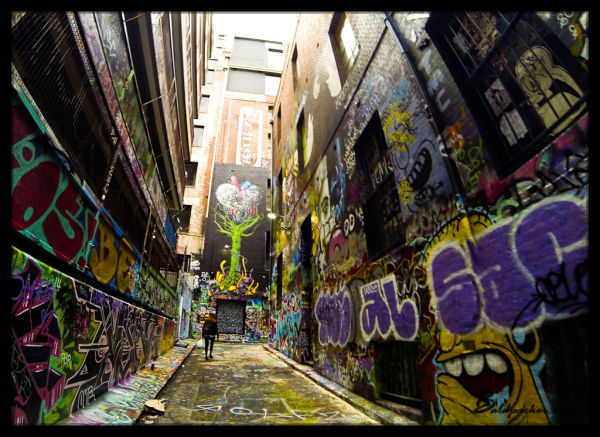 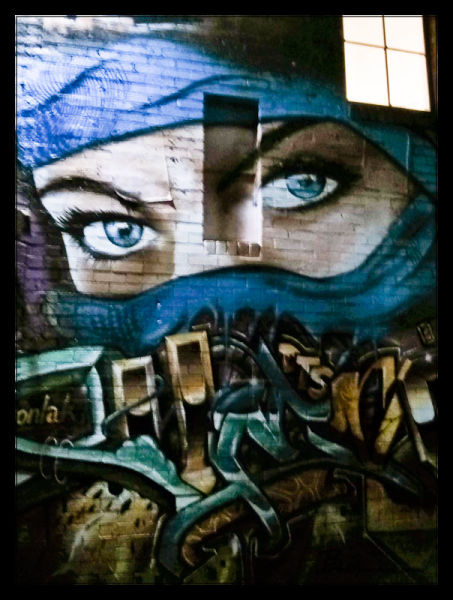 Sara and I continued exploring the side streets and alleyways of Melbourne’s CBD where many of the best coffee shops and bars can be found. After a caffeine boost we found the State Library of Victoria, which Tom had recommended we visit. The library is absolutely stunning and features a beautiful domed reading room and a number of beautiful art displays. 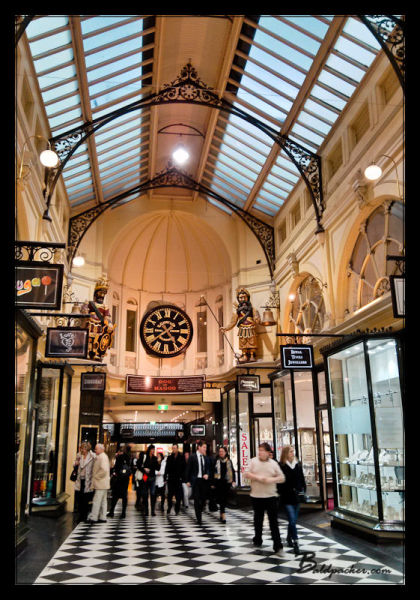 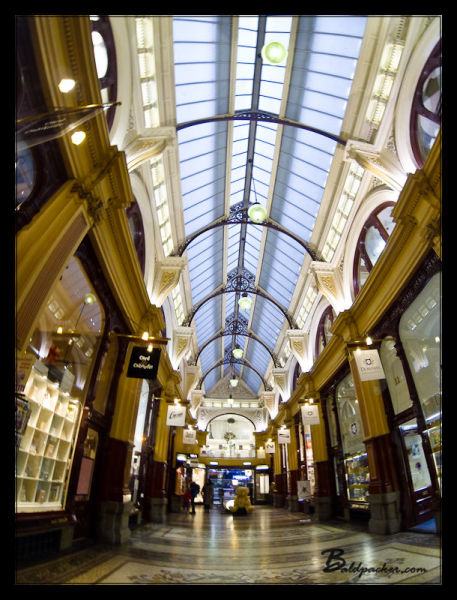 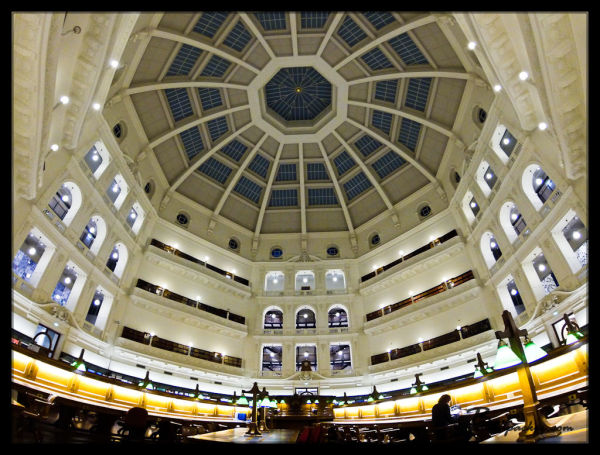 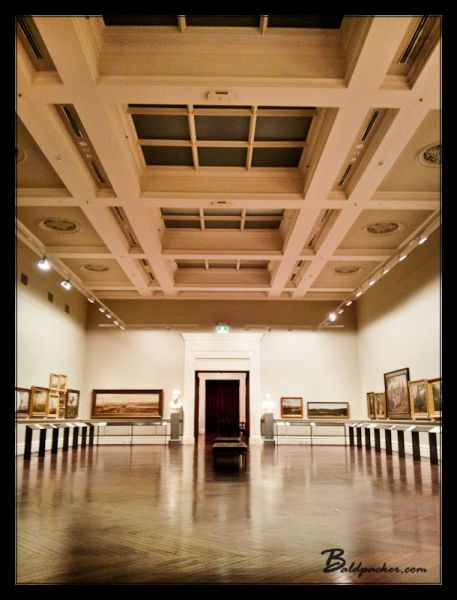 Free Art Museum at the State Library of Victoria 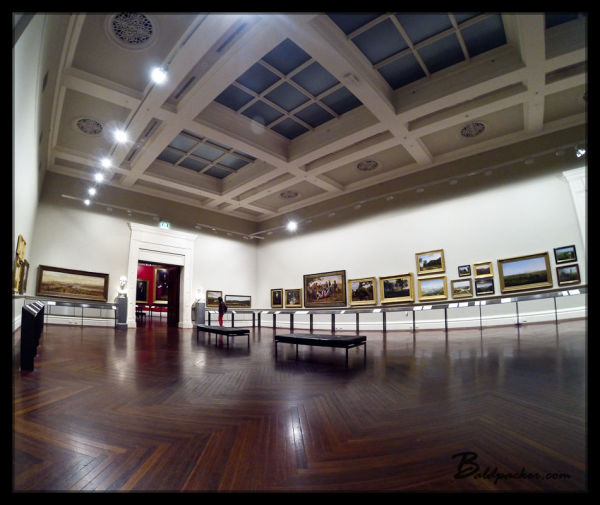 Free Art Museum at the State Library of Victoria

We also made a quick stop at the ANZ Gothic Bank on the corner of Queen Street and Collins Street. The Cathedral Room in the former Stock Exchange building is beautiful. At one time it was the main trading room of the Stock Exchange and therefore possibly the most important business center in Australia. 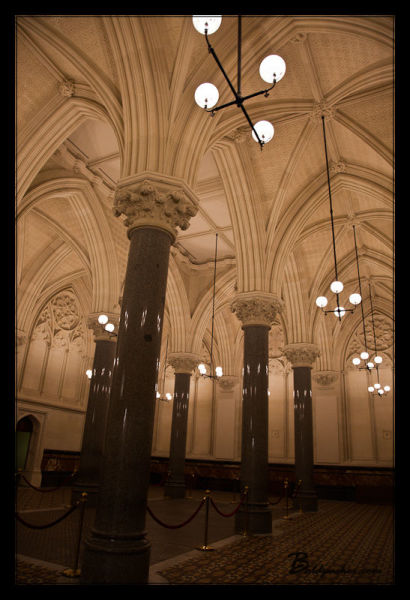 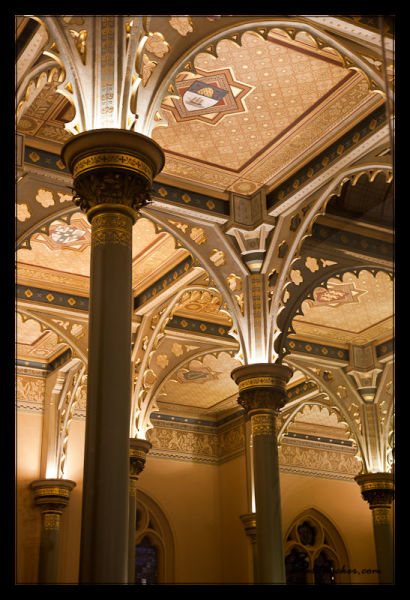 By the time we finished exploring the library it was already dark and we decided we had enough sightseeing for the day and could use a drink. Janina had recommended a couple of bars in the area which gave us motivation to conduct a small pub crawl. The first stop was the Curtin House Rooftop Bar. The Curtin House is a really cool building and there are different restaurants and bars on each of its six floors. We were most interested in the rooftop views, so we climbed the stairs and earned ourselves a beer. The Curtin House Rooftop Bar is a cool spot definitely worth visiting. Even if you don’t feel like socializing they have a Cinema screen setup for outdoor movies – very cool! 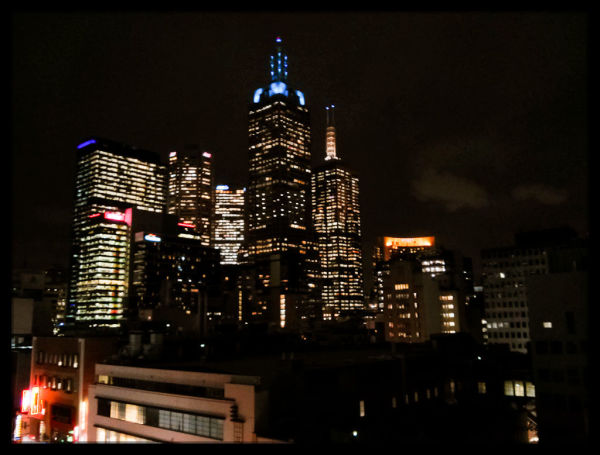 After a quick drink at the Curtin Roof Top we made our way to the Croft Institute, a strange laboratory themed bar hidden down a dark alleyway filled with street art. The atmosphere was not really to my liking (who wants to drink in a hospital?) but the bartenders knew thir stuff and were able to mix all sorts of wild and unique cocktails. In fact, Janina suggested we just given the bartenders a few clues as to flavours we like and let them come up with something. I requested a bourbon drink and ended up with a good Maker’s Mark Old Fashioned made with maple syrup rather than the usual sugar. Perhaps he had heard my Canadian accent and decided I missed my maple, but in any event, it was a tasty take on a traditional favourite. Sara’s cocktail came with a plastic syringe as a stir stick. Once again, a bit strange, but it was fun using it to spray shots of Vodka awesomeness in our mouths. 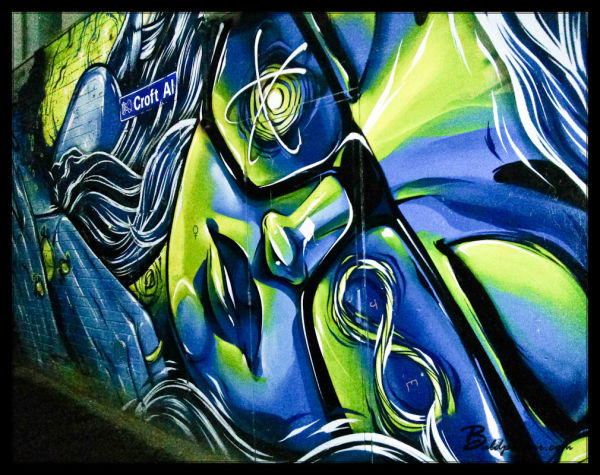 Street Art in the Alley to Croft Industries

On the way home we passed the James Squire Brewhouse and I decided it was the perfect excuse for a late night snack and night cap. The food menu was fun and unique and Sara and I shared a Kangaloo Vangaloo (Kangaroo Curry) and Rabbit Gnocci. Both dishes were tasty and complimented well by our James Squire beers.

The next day we awoke to sunshine and made our way to St. Kilda. I had hoped to see penguins on the breakwater. Unfortunately, the blue penguins are more common in the summer and just after sunset so we were unable to see any in the late morning. St. Kilda is a beautiful area and the perfect place to view Melbourne’s skyline and waterfront. Sara and I then walked down Acland Street which is lined with cafes, bars, restaurants, bakeries, and other independent shops in search of a place to eat lunch. 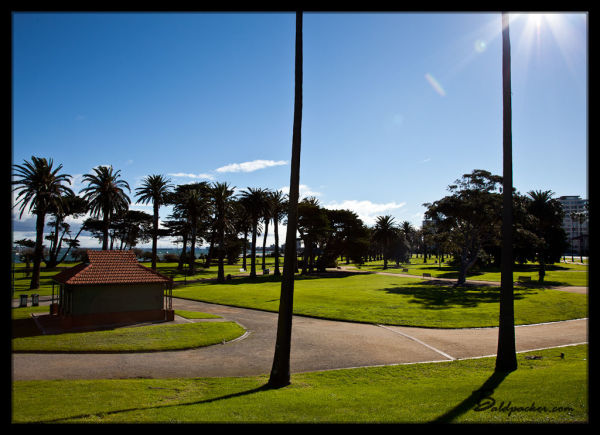 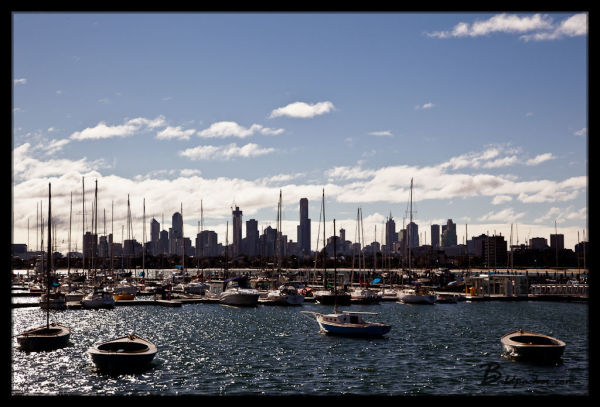 Janina had recommended a restaurant called Lentil As Anything to us and after hearing about its concept I really wanted to visit. Lentil As Anything is a non-proft organization that was originally founded to help artists and other people with irregular incomes have regular access to meals, paying for what they had consumed whenever they can, such as after a gig. Following this concept, there are no fixed prices on the Lentil As Anything menu and you are simply expected to pay whatever you feel is reasonable. The meals are vegetarian and volunteers run the kitchen but Sara and I thoroughly enjoyed our meals and the service and paid accordingly. I really love that such a concept can survive, let alone thrive (there are several locations now), and it is another testament to Melbourne’s wonderful culture and residents. 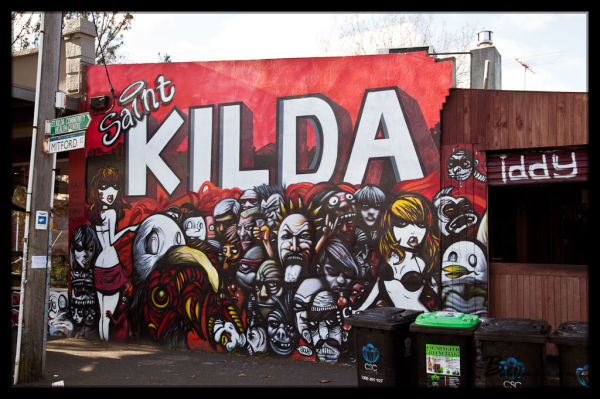 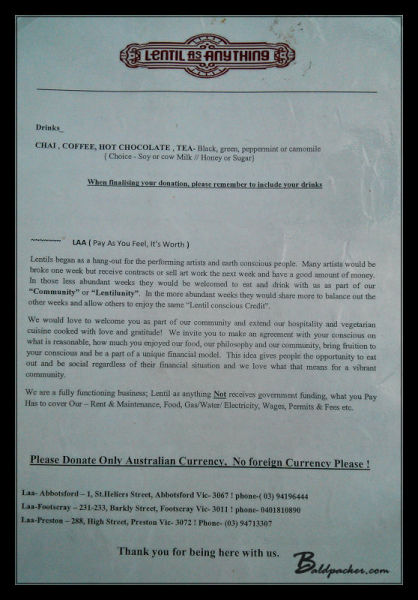 Lentil As Anything Donation Restaurant

After lunch Sara and I returned to Acland Street for a coffee and freshly baked treat for dessert. Given the number of bakeries and coffee shops on Acland Street we knew finding a place would not be difficult, but since they all had amazing baked goods on display choosing which one to actually buy from was surprisingly time consuming and difficult since everything looked so delicious!

After our tasty lunch and scrumptious dessert we walked through Arthur Park, a massive park filled with joggers and dog walkers. The park offered great views of Melbourne’s skyline and I would highly recommend walking through it on a nice day. As dusk fell over the city we returned to the Essendon area to meet Tom and Christina at a wine bar called Strange Love and then enjoy a wine and pizza night back at their place. 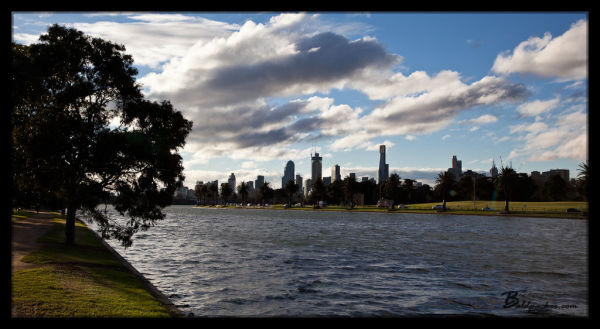 On our final day in Melbourne Sara and I returned to the CBD and wandered around the Federation Square area. I loved the fact that there is free WiFi in the area and also saw advertisements for events like free cinema nights and concerts. Federation Square is a great place to people watch and I suspect there are always buskers there during daylight hours. Janina had told us that there was a free interactive movie exhibit in the museum so Sara and I made our way through it learning about Australian actors, movies, and film locations.

Tom was good enough to advance tickets for a Melbourne Storm vs. Canterbury Bulldogs game for me which offered the perfect opportunity to arrange a get together with friends. I know a few girls in Melbourne and Emily (a girl I went to school in Canada) and Renae (a girl I met on trip in Croatia) brought their partners out for drinks, catching up, and watching rugby. We all met up at the Duke Pub before the game for drinks and then walked over to AAMI Park for the game. It was great seeing old friends and meeting their partners and even though none of us knew much about Australian Rugby League, I think everyone had a good time.

After the game Emily and her partner John took Sara and I to a fancy (and expensive) bar called Siglo which offers amazing views over the parliament building. Siglo offers an excellent selection of wines, whiskies, and beers, but its steep prices reflect the formal service and exceptional views. 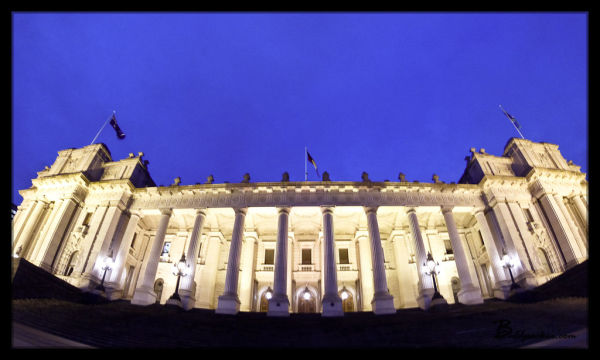 It was the perfect way to end our time in Melbourne and the entire day made me look forward to returning to Melbourne one day for more coffee, beer, food, and sport.