A map of the stops along the tour is shown below:

Our driver / guide was a very friendly man and he did a great job of dividing up our day with stops by seeing some of the attractions on the way to Glen Helen and others on the return drive. I cannot remember the order we stopped in so I have simply documented them from East to West as shown on the map.

Since water is such a valuable commodity in Australia’s dry outback, many of the attractions were based on watering holes and Simpsons Gap was no exception. Simpsons Gap is basically a small valley carved from the rock faces with a small watering hole at the end. It was quite dry when we were there in July but given the “no swimming” signs I saw I expect there can be much more water in the area during wetter months. A highlight of Simpsons Gap is the presence of Black-footed Rock-wallabies in the rocky cliffs around Simpsons Gap. We were lucky enough to see a couple hopping through the rocks but it was at such a distance I was unable to capture any photographs. Despite the distance I am still happy I got to see a wallaby in the wild as many of the Australians in our group had not previously seen any in nature.

A Little Dry for a Swim… 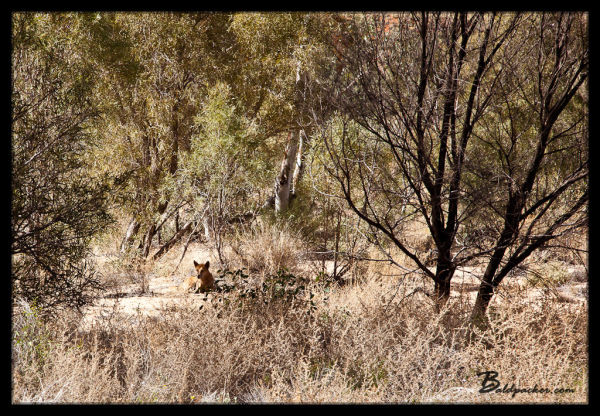 Dingo Relaxing in the Bush

Standley Chasm is on an Aboriginal reserve and an Aboriginal family runs a small café and campground there. There is a nice 20 minute walk through the chasm which featured lots of healthy gum trees and beautiful birds. I would not consider Standley Chasm spectacular by any means but it was still a nice place for a short walk.

The Ellery Creek Big Hole is another waterhole fed by the Ellery Creek. Unfortunately, it was too cold in July for us to go swimming but it is a beautiful, picturesque waterhole and a nice tranquil place to relax and watch the butterflies. 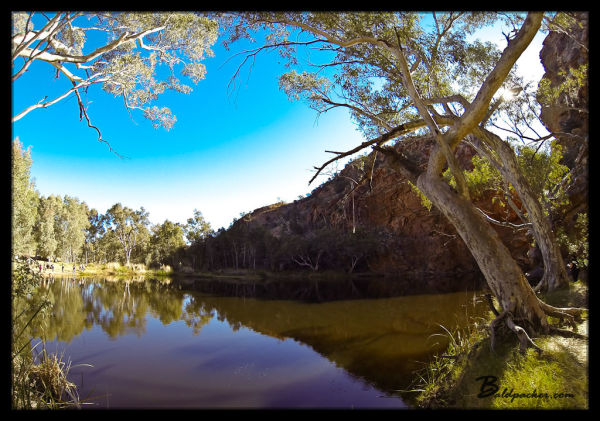 The Ochre Pits are a sacred site used by the Arrarnta Aboriginals for mining ochre. The natural ochre in the cliffs was traditionally gathered, mixed with water or Emu fat, and used for painting everything from skin to walls for ceremonies and other purposes 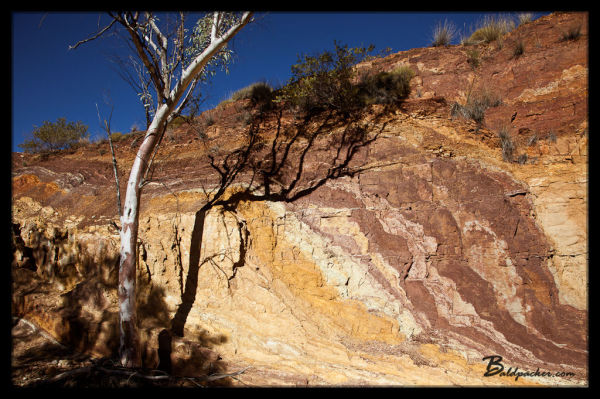 The Ormiston Gorge was probably my favourite of the watering holes and we did see a number of people taking advantage of the waterhole by swimming and cliff jumping into it. The whole area is beautiful with sand and lush vegetation surrounding the watering hole. It was a great place to just sit, relax, and listen to the birds sing. If I lived in Alice Springs I could definitely see making weekend trips out to the Ormiston Gorge for picnics and swimming in the summer. 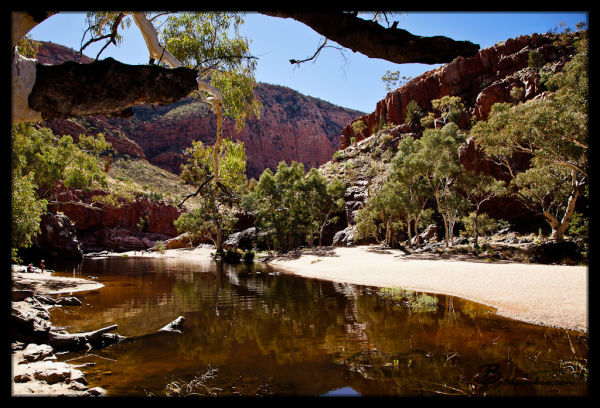 The Glen Helen Gorge was the furthest West we went and home to another watering hole. The most interesting part of the Glen Helen Gorge was a sign describing Finke River, thought to be the world’s oldest river, with sections dating back 340 million years in age. The Finke River runs for 600km to the western edge of the Simpson Desert in northern South Asutralia. Aboriginal legends say the Finke was formed when the Rainbow serpent thrust North from Lake Eyre. Given the lack of water in the area it is no doubt that the Finke greatly supported Aboriginal life in centuries past.

I would not describe any of the scenery on our Emu Run tour to be spectacular, but it was certainly beautiful and made for an enjoyable day trip. I suspect the West MacDonnell ranges would be a wonderful area to camp or hike in as well as go swimming in the summer but I would not consider them to be as stunning as Ayers Rock, Kata Tjuta, or Kings Canyon so I would only suggest exploring the area if you have the time. If you would like to go, Emu Run did a very good job of organizing our tour and the tea, coffee, biscuits, and lunch they provided were all excellent.