My second trip to Australia began in Alice Springs after narrowly catching my connecting flight from Melbourne. I had taken the direct flight from Dubai to Melbourne, which was over 14 hours long, and was unable to sleep the entire way. I made it through customs in Melbourne without a problem but fell asleep while seated at the domestic gate to Alice Springs. Thankfully, the gate agents figured out I was the passenger they were missing and woke me up to board the plane. I cannot imagine what I would have done if that flight left without me while I was sleeping right there! 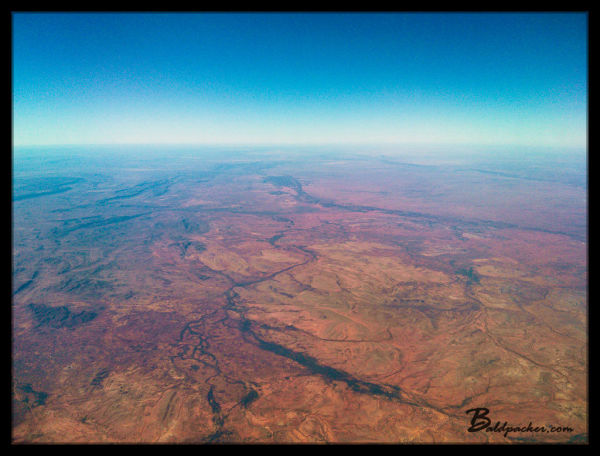 Aerial Views over the Outback

Once in Alice Springs, I caught the airport shuttle which is easily arranged in the airport arrivals area. The shuttle was something like $13 and as it dropped me off directly in front of my hostel, Alice’s Secret, where I immediately fell asleep. Sara arrived a few hours later and we walked into town for a pub dinner.

The next morning, we woke up early to pack our bags for our three day Mulga tour to Kings Canyon, Kata Tjuta, and Ayers Rock. We had pre-booked the tour for $355 which included all transporation, food, park fees, and camping equipment. While waiting for our pick-up in front of our hostel we met Janina, a very nice German girl who was also booked on our tour. Before departing, we were told by the hostel manager that our guide, Chris, is one of the best in the outback and this quickly became apparent after we were picked and Chris told us about his history of guiding. Chris is extremely knowledgeable about outback geology and vegetation as well as aboriginal culture and has spent his life in the outback learning, teaching, consulting, and guiding so we were very lucky to have him leading our tour.

Our first stop was a camel farm where people had the opportunity to ride a camel. Given it was still early in the morning and quite cold I elected to go inside for a coffee instead where the roadhouse had set-up a small museum filled with information about Australia’s outback, local wildlife, history, and Aboriginal culture in the area. I also went out to see the camel farm’s pet dingo, birds, and kangaroos before getting back on the bus for the drive to Kings Canyon. 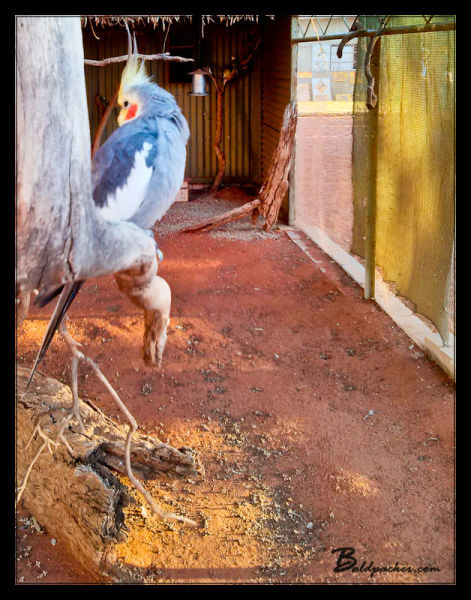 Pet Bird at the Camel Farm

At Kings Canyon, Chris led us on a 6km Canyon Rim loop walk that exposed us to a massive natural amphitheater, sheer cliff walls rising 100 meters, and a beautiful lush oasis called the “Garden of Eden”. The whole area was absolutely spectacular but also somewhat frightening. There have been numerous deaths in the area due to both dehydration and people falling off so it is definitely important to be careful. The geology of Kings Canyon is interesting as well as the sandstone, now eroded into beautiful forms, was laid 440 million years ago. 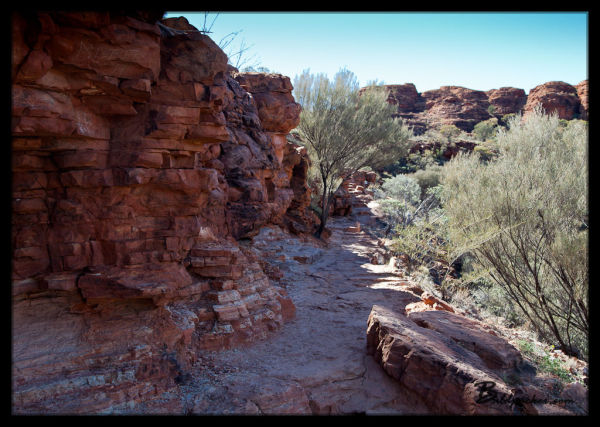 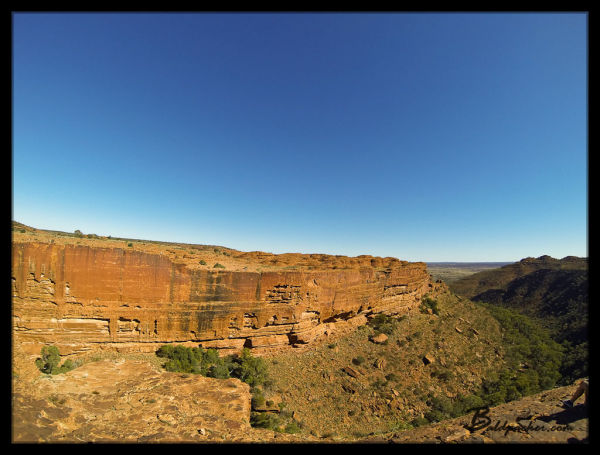 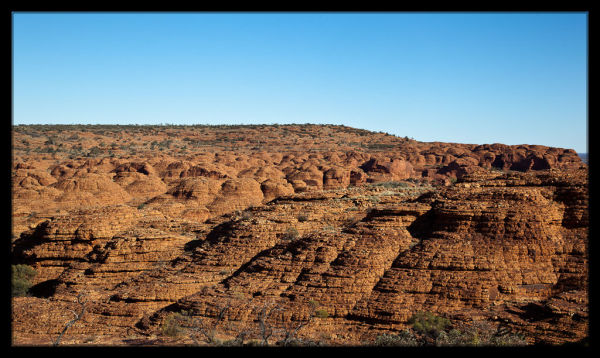 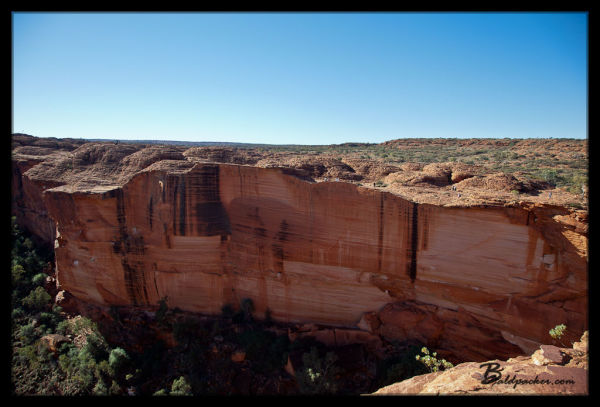 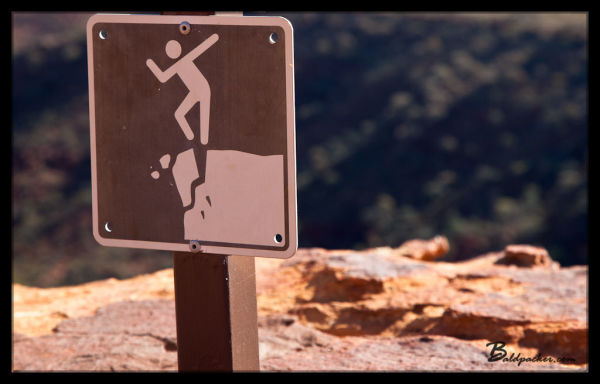 Many Deaths Have Occurred in Kings Canyon – Be Careful! 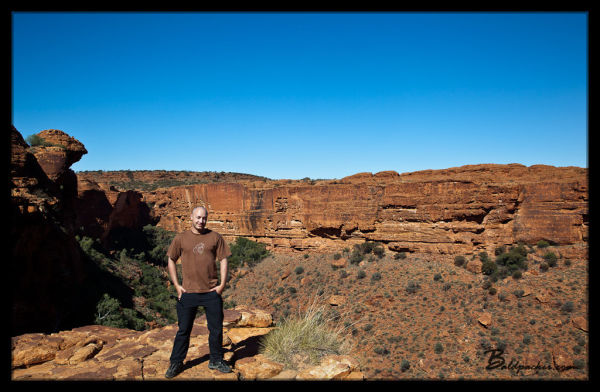 After the hike we continued driving to our campsite, deep in the outback’s bush, stopping to collect firewood from the dry desert brush along the way. We arrived as the sun was setting but Chris quickly built a campfire and put everyone to work setting up the camp and preparing tacos for dinner. Given our trip was in July, during Australia’s winter, the desert got very cold very quickly. After dinner, most everyone quickly climbed into their swag to escape the cold but Sara and I spent a few minutes enjoying the incredible stars before racing for warmth. The Milky Way was truly spectacular and I must say the outback provided some of the best stargazing I have ever seen. 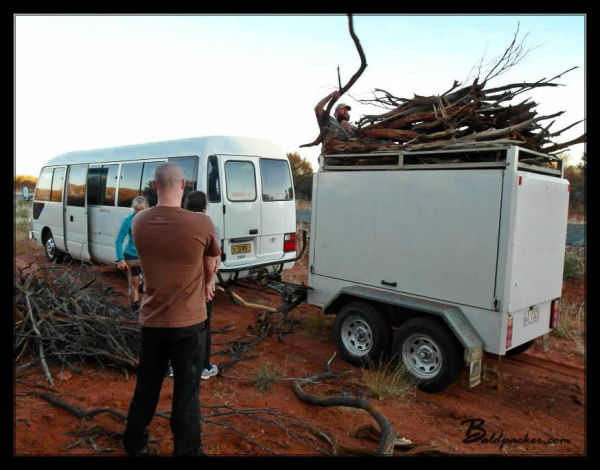 For those who have not heard of a swag before, it is basically the same as what Canadians would refer to as a bivy sack. It is essentially a waterproof sleeping bag compartment with a foam matress inside so you can sleep outdoors without erecting a tent. I found my swag to be very comfortable and despite the frigid cold I slept relatively well next to our big camp fire.

The next morning we woke up early and drove to the Kata Tjuta (Olgas) for a 5.5km guided walk through the Valley of the Winds, stopping for breakfast at a picnic area with views over Ayers Rock. Our walk through the Olgas was outstanding and the scenery in the area was remarkable. Chris did a fantastic job of teaching us about the flora and geology of the area. Mount Olga, the highest point of the 36 domes that make up Kata Tjuta is 1,066m ASL with a relative relief over the surrounding plain of 546m – truly remarkable. 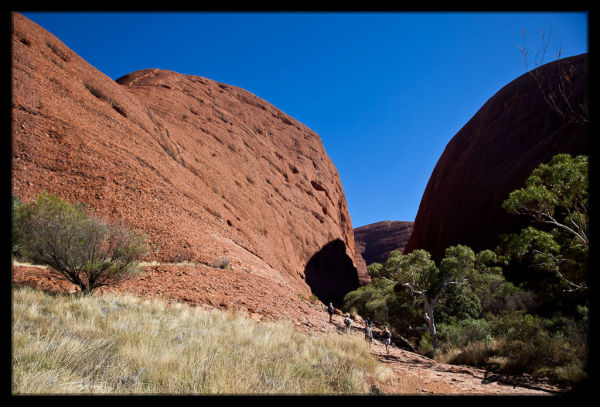 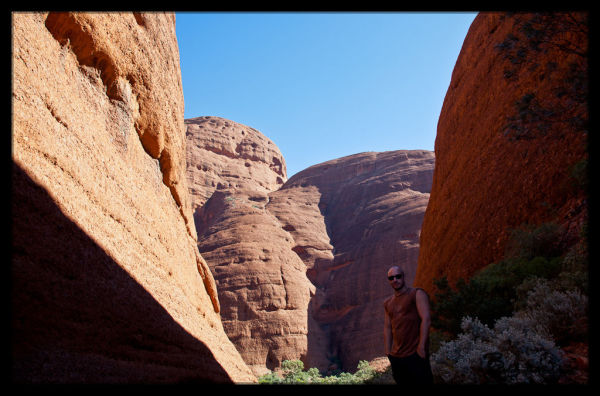 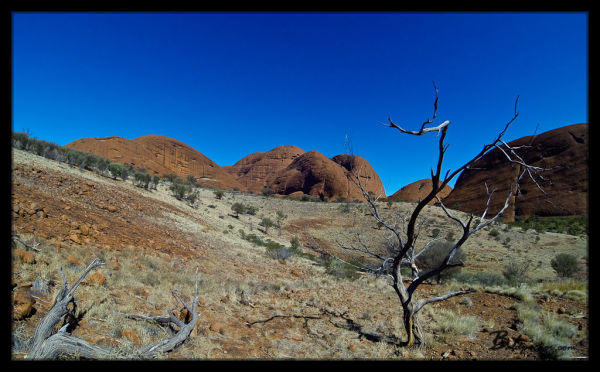 Both Kata Tjuta and Ayers Rock date back to around 550 million years ago when the Woodruff Thrust pushed granulite facies over metamorphic rocks crating the Mount Currie Conglomerate. Both Uluru and Kata Tjuta are sediments originating from this conglomerate and have a chemical composition similar to granite and the orange-red colours are due to an iron oxide patina covering the rocks. The beautiful rock shapes are due to the millions of years of erosion that have occurred which have left stunning profiles on the otherwise flat outback horizon.

After hiking through Kata Tjuta we quickly made our way to Ayers Rock for a quick introduction to its history and a couple traditional Aboriginal stories. Chris also showed us a cave with nicely preserved Aboriginal paintings which had likely been used for story-telling in the past. 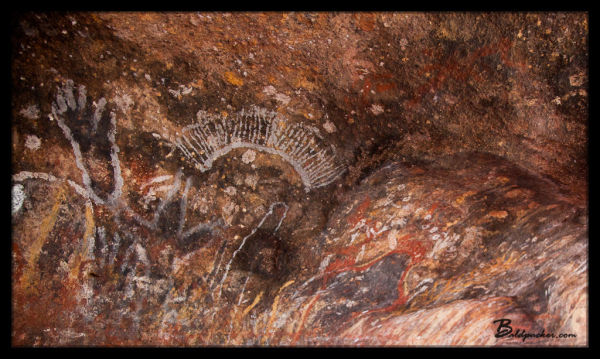 From there, we drove to the most popular place for watching the sunset over Ayers Rock. To celebrate the fact that we had finally arrived at this massive rock in the middle of nowhere we opened several bottles of sparkling wine and cheersed until the sun set. It was incredible watching Ayers Rock’s colours change as the light decreased and how different shadows and details would show themselves over each passing minute. 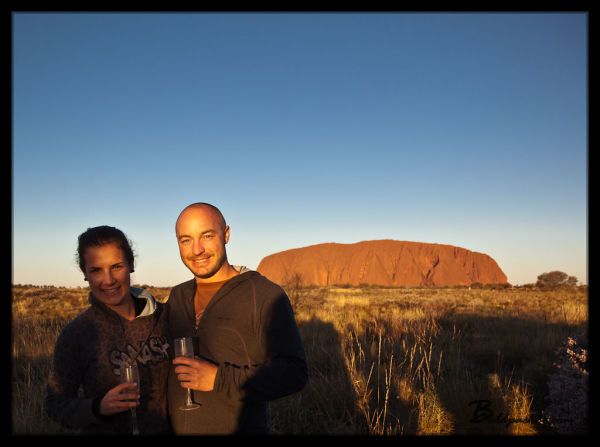 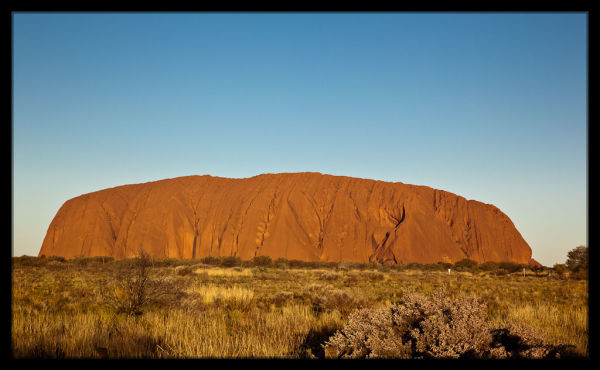 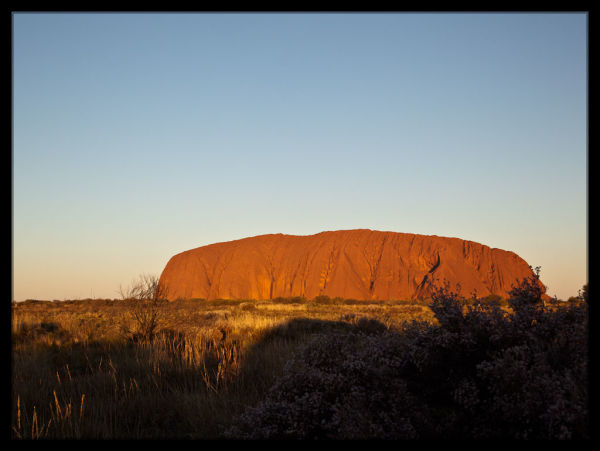 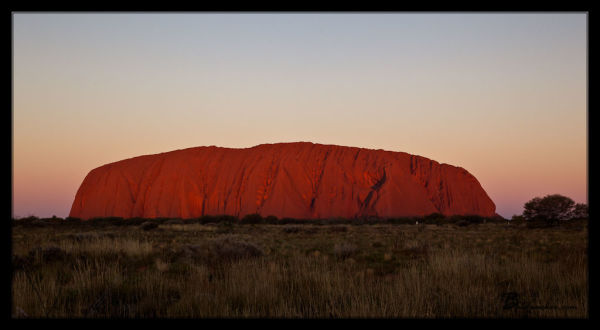 When the sun finally set we drove back to our campsite for dinner, but it quickly became clear that a lot of the group was buzzing heavily from the sparkling wine and Chris played it up well. He put on some really good music, strobed the interior lights, and got the party started. My favourite part was when he kept us going round and round a round about for several minutes as everyone let their hair down and got loose. Good times!

Once we arrived at the campsite Chris helped me get the fire started. The wood we collected in the outback was incredible firewood. I’m not sure if it was mulga or eucalypt but it was very hard, dense wood that burned long, hot, and without much smoke. Unfortunately, despite my Canadian outdoor skills, without any paper or other fire starters I was struggling to get the hardwood started. Chris showed me a grass that can act as a natural fire accelerant and it was amazing how quickly the grass was able to light the hardwoods. I always love learning outdoor skills in unfamiliar ecosystems and now know what I would need to start a fire if I was ever stranded in Australia’s outback.

While I was preparing the fire the rest of the group was inside preparing a wonderful meat-lovers dinner including kangaroo steaks and camel burgers. The kangaroo steaks were definitely my favourite as they were very lean, tender, and flavourful. Chris even served up a kangaroo carpaccio which was surprisingly tasty on its own. The group was very hungry after a long day of walking in the heat but also very social thanks to the sparkling wine and we all had an enjoyable dinner together.

After dinner, Chris led a star-gazing walk where he pointed out a number of stars and constellations in the Southern sky and taught us some of what he knew about astronomy. It was very interesting and the perfect way to end a wonderful day.

The next morning, we woke up early enough to drive to a viewpoint and watch the sun rise over Ayers Rock. Just as we had witnessed the evening before, the colours, shadows, and shape of Ayers Rock changed immensely as the sky got lighter and lighter. We were also able to see a beautiful profile of the Olgas and I knew the entire journey to Alice Springs and then Ularu had been worthwhile. 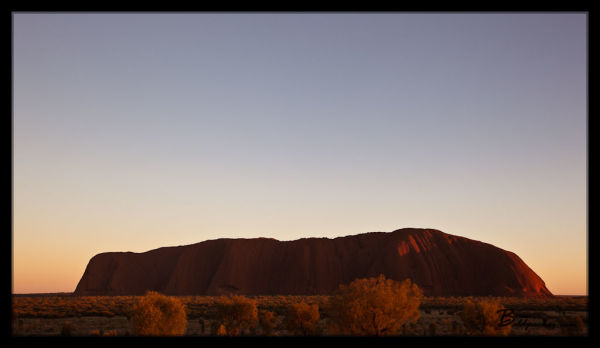 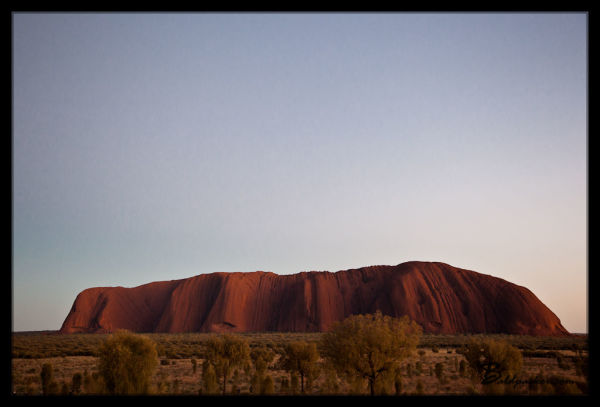 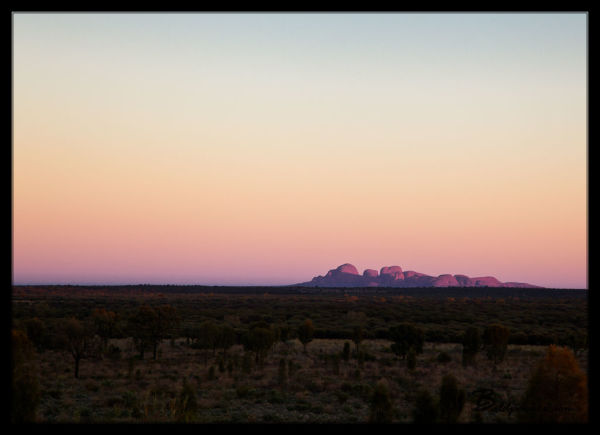 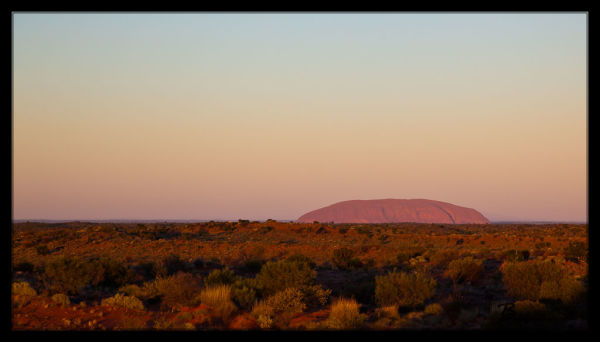 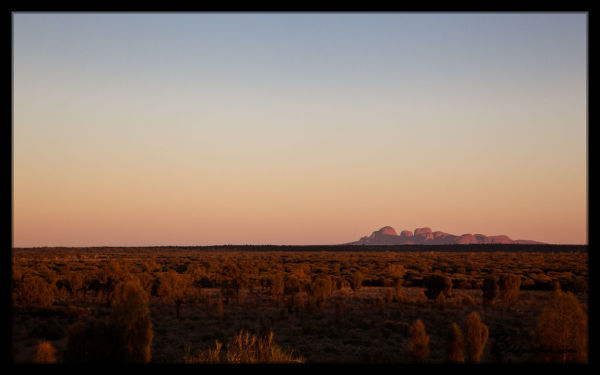 Chris then dropped us off at the base of Ayers Rock and we spent the rest of the morning walking around the rock. It truly is beautiful from every angle and being right next to Ayers Rock made me better appreciate its sheer size. We were given the opportunity to climb Ayers Rock as well but Chris explained that it was highly discouraged by the Aboriginals and that rather than trying to “conquer” Ayers Rock perhaps we should try to connect with it as the Aboriginals do. 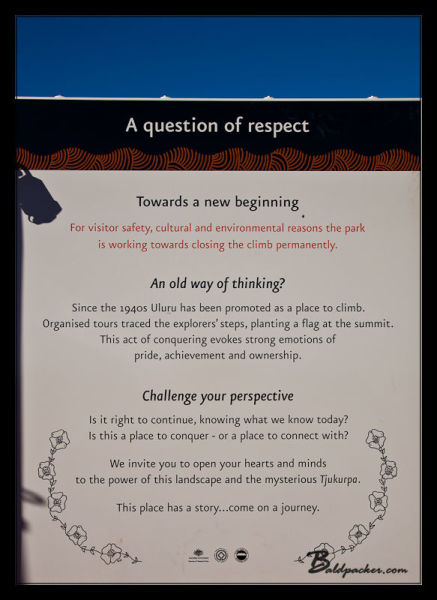 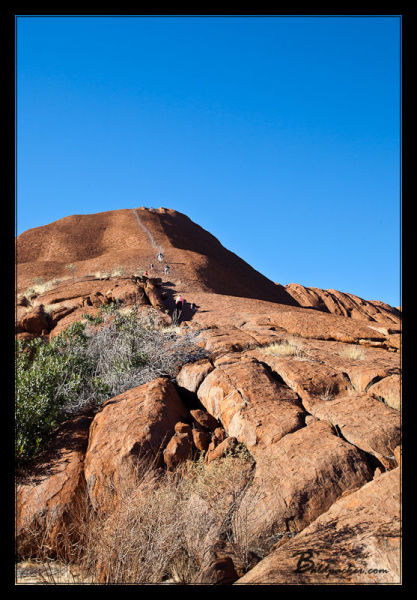 Although I do imagine it would be a great climb and the views from the top may be spectacular, I also feel that there are thousands of mountains around the world which do not have cultural significance that I can climb and therefore, I chose not to climb Ayers Rock. I still feel good about that decision and really enjoyed simply walking around Ayers Rock. 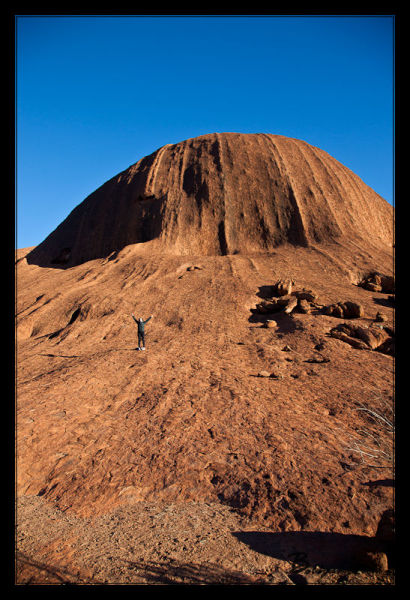 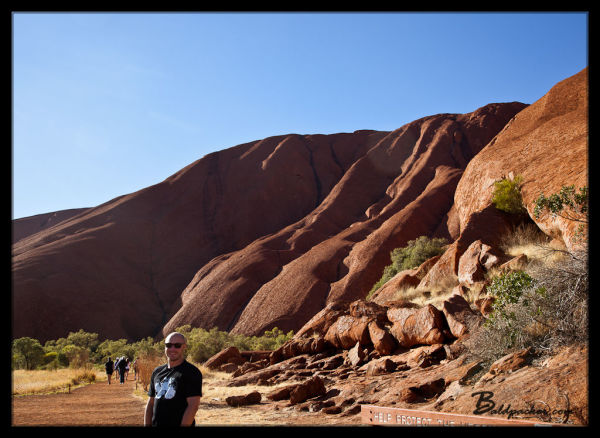 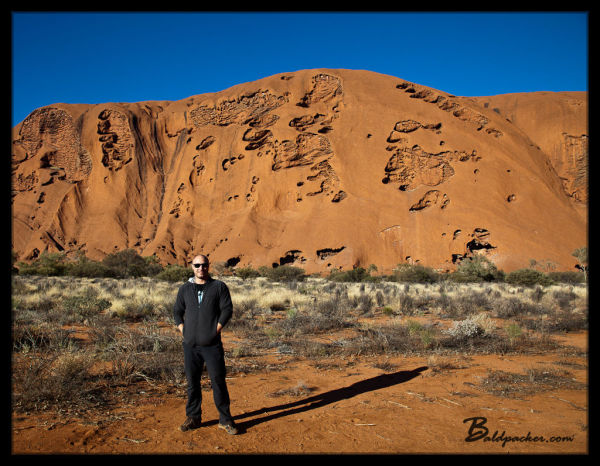 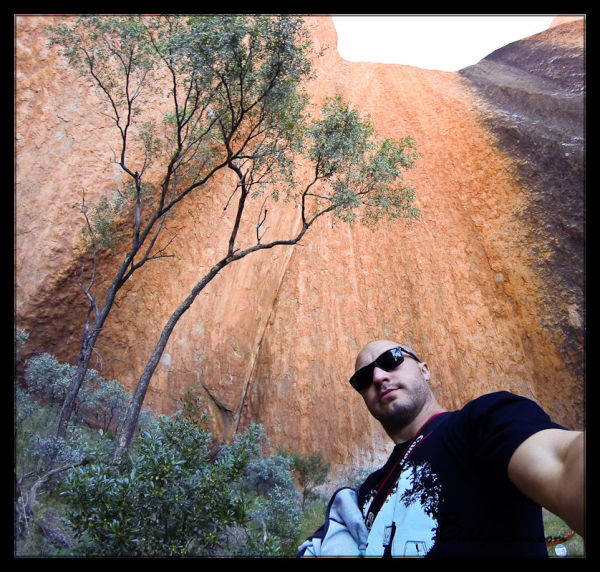 After we finished our walk it was sadly time to return to Alice Springs. I took advantage of the long journey to catch up on sleep while others on our bus played games and shared stories. That evening, after wonderfully refreshing shower, our group met at Annie’s Place Hostel for drinks and dinner. It was sad to say goodbye to the group but I thoroughly enjoyed the trip and would highly recommend it to anyone interested in exploring the outback.