Sydney is a Australia’s largest city, with a population of nearly 5 million people. Although it would be easy to spend weeks in Sydney as a tourist or backpacker, I have had the pleasure of exploring Sydney over two separate stopovers and I hope to have many more stopovers in Sydney in the future. 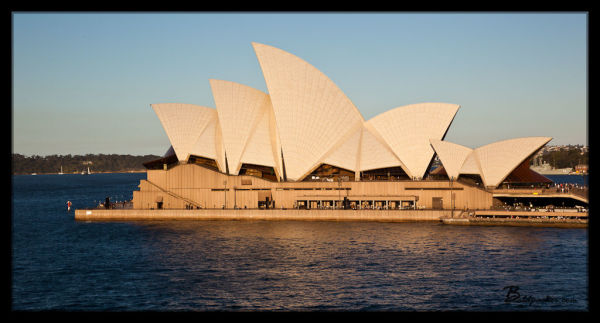 On my first stopover, I was a young backpacker who only had one day in Sydney before heading off on a surf camp. During that stop-over, there was a “seven bridges walk” being put on as a charity walk in support of cancer. I was unable to check in to my hostel so I set out exploring and stumbled across signs for the walk down around The Rocks. As a tourist, I thought the signs for the “seven bridges walk” were for an informative tourist walk so I ended up walking nearly half of the 27kms in blue jeans and flip-flops before I found organizers in T-shirts who explained that I had actually been participating in a fundraiser walk without the fundraising! Thankfully there was a free shuttle to take me back to town so I could check in my hostel to shower and rest my sore feet. Sadly, during my first stopover in Sydney I spent the whole day walking across bridges instead of seeing the tourist sites, though I was at least able to see the Sydney Opera House and walk across the Sydney Harbour Bridge.

On my second stopover, I was traveling from Cairns to Launceston via Sydney with Sara. We had found a very cheap flight from Cairns to Sydney but the downside was that it departed at 06:45. We had no problems finding an early morning shuttle to the Cairns airport and, even though we had purchased our flights separately, were seated in seats 01A and 01B when we checked-in electronically. I just hoping we would be able to sit together on the flight but was extremely happy when we were also given the front emergency row with extra leg room.

Luckily, Sara had just visited Sydney with her friend Laura a month earlier so she had lots of suggestions for where we should go and what we should do. Even better, Sara’s cousin, Marta, knew Kara, a girl living in Sydney, through CouchSurfing. Kara set us up with a guest bed in her apartment right on Coogee Beach. Coogee Beach was actually the perfect place to stay for our stopover as a taxi from the airport was only $30 which is about what the train would have cost to Sydney’s city centre but far faster and much less hassle. Being able to see the ocean and beautiful beach from Kara’s apartment window was an added bonus! 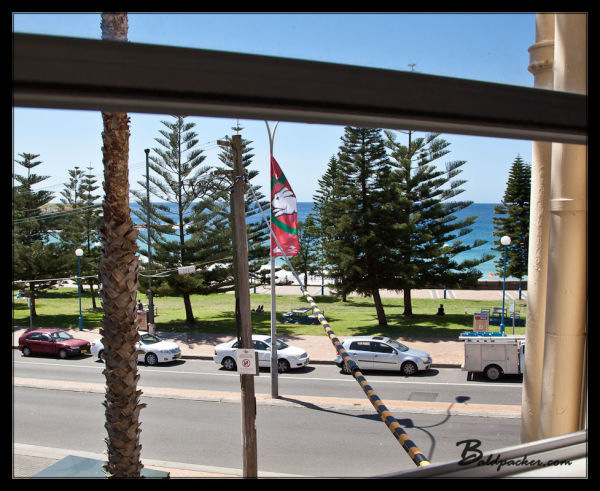 After dropping off our luggage at Kara and Jeremy’s, Sara and I went for breakfast at Globe Café on Coogee Bay Road. There were lots of wonderful independent cafes on Coogee Bay Road and I was very happy with Globe Cafe’s coffee and food prices. Coogee Bay Road seems to be a very popular street and even on a weekday morning Sara and I enjoyed sitting out in the sun people watching. After breakfast, we purchased an Opal Card for the Sydney metro from a nearby convenience store and caught the bus from Coogee Beach to city center for $3.40. Our goal was to join the “I’m Free” walking tour at 2:30pm from Sydney’s Town hall but Sara and I had time to wander the very touristy Cockle Bay Wharf area.

The “I’m Free” Walking tour was excellent and provided a great introduction to Sydney’s place in Australian history. The free walking tour also took us to a number of Sydney’s most popular tourist sites including the Sydney Opera House, the Harbour Bridge, the Rock’s District, Cadman’s Cottage, Hyde Park Barracks, The ‘Rum’ Hospital, St Mary’s Cathedral, Fort Denison, Pitt St Shopping Mall, Martin Place, Sydney Tower, Hyde Park, Circular Quay, and of course Town Hall where the tour began. My favourite part of the walking tour was a side street filled with bird cages. The art installation is called “Forgotten Songs” and features fifty bird sounds which are intended to reflect how Sydney sounded before its development. 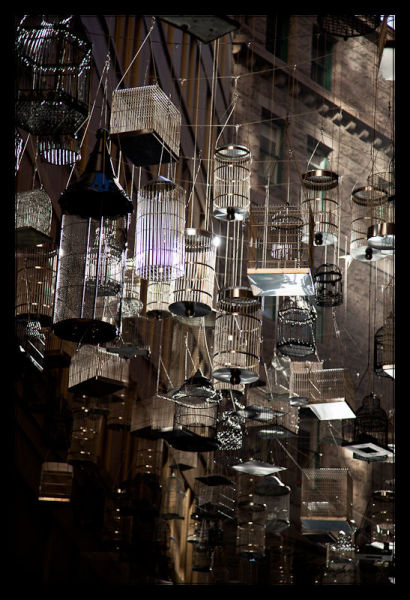 The tour ended just as the sun began to set providing great views of the Sydney Opera House. 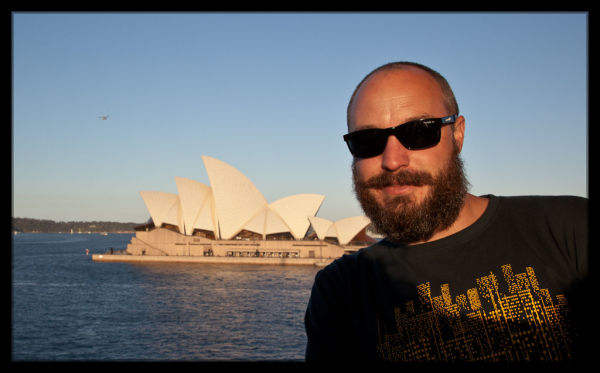 After the tour, Sara led me to Observatory Hill to watch the sunset and enjoy stunning views of Sydney Harbour Bridge. 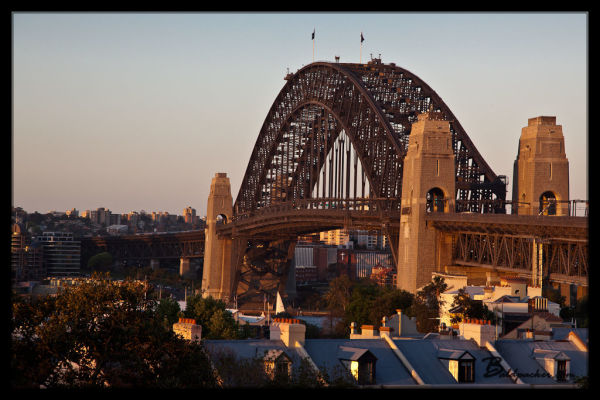 After the sun set we went for drinks and snacks at the Lord Nelson Brewery Hotel. There are many bars which claim to be Sydney’s oldest but Lord Nelson instead claims to be “Sydney’s oldest continually licensed hotel”. The atmosphere inside was great and I enjoyed their beers even though they were served colder than they should have been so I couldn’t fully appreciate the beer. 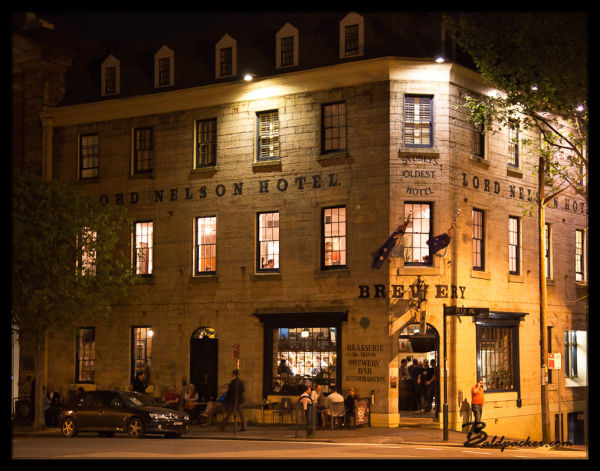 After Kara finished work Sara and I went back to Coogee to meet her for drinks, passing the beautifully lit Sydney Opera House on the way. 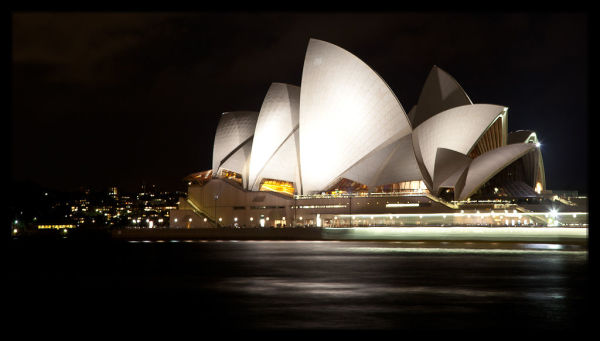 Conveniently, right next door to Kara and Jeremy’s apartment was the Coogee Bay Hotel and its fantastic bars and beer gardens. Even though it was quite cold, the Coogee Bay Hotel beer garden had plenty of heaters around which made sitting outside very pleasant. It was my first time meeting Kara and I thoroughly enjoyed hearing her travel stories and lifestyle in Sydney.

The next morning, we returned to the Globe Cafe on Coogee Bay Road for breakfast and coffee before taking the bus back into Sydney’s center. We essentially retraced our path from the free walking tour, beginning in Sydney’s beautiful Hyde Park, but taking more time to actually explore the various museums and historical buildings. 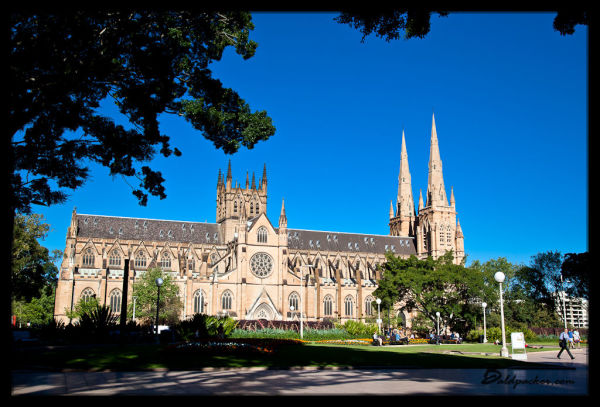 We also walked across the Sydney Harbour Bridge which provided great views back to the city as well as a look at some of the beautiful luxury homes on the other side of the harbour. 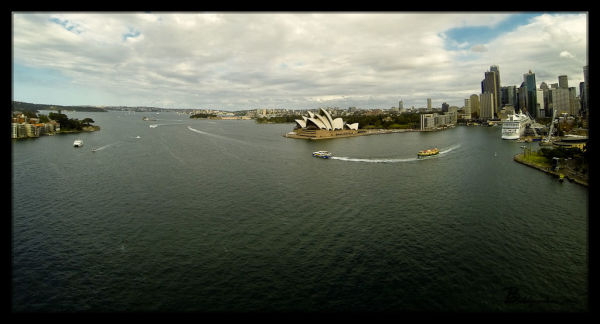 I had been interested in going up the Sydney Tower Eye but at a price of $26.50 neither Sara nor I thought it was worth it. Luckily, on the free walking tour we were given the recommendation to go to the O Bar, on the 47th floor of the O Tower on Australia Square, for a drink instead. The O Bar does have a dress code but thankfully I was wearing jeans, a collared shirt, and nice walking shoes. Even then, most people were in suits and other formal wear and I felt under dressed. The drinks in the O Tower are not cheap and my Cherry Chocolate Sour (buffalo trace bourbon, cherry heering, joseph catron white cacao, with lemon juice and a dash of vanilla) rang in at $18 but the views made the drink well worth the price.  The O Bar’s floor slowly rotates so as we slowly savoured our drinks Sara and I were treated to wonderful views over Sydney. 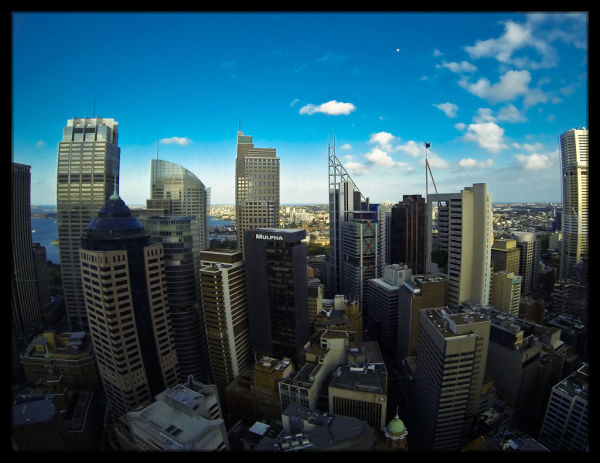 Views over Sydney from O Bar

Since Sara and I enjoyed our I’m Free Walking Tour so much the previous day, we went for the I’m Free Rocks Tour at 6pm. 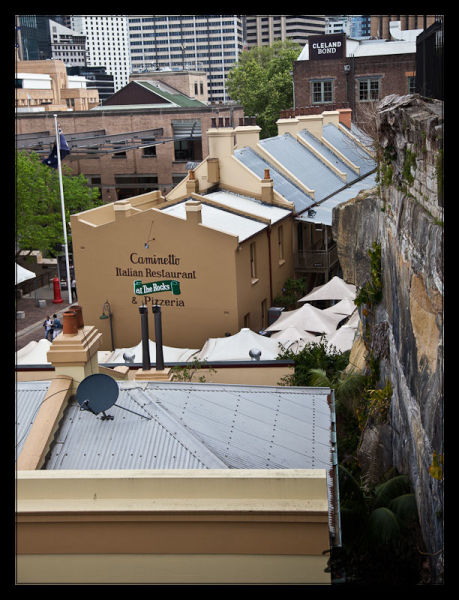 The tour began at Cadman Cottage and we set out exploring The Rocks, Australia’s first European Settlement. The Rocks area is filled with history as it was where convicts were sent to settle and most of the tour’s stories related to murders, muggings, and other sinful doings. The Rocks is definitely an interesting area and I did learn quite a bit about Australia’s history during the tour. The part of the evening I enjoyed most was seeing the Sydney Harbour Bridge (from Observation Hill again) and the Sydney Opera House beautifully lit at night. 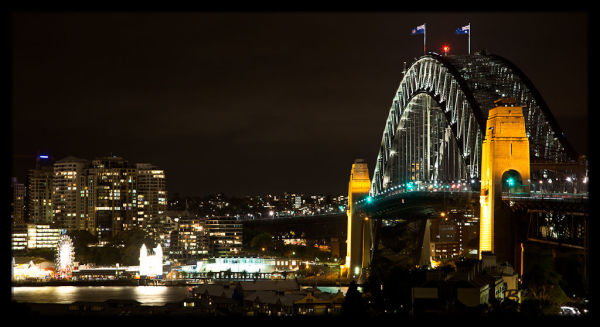 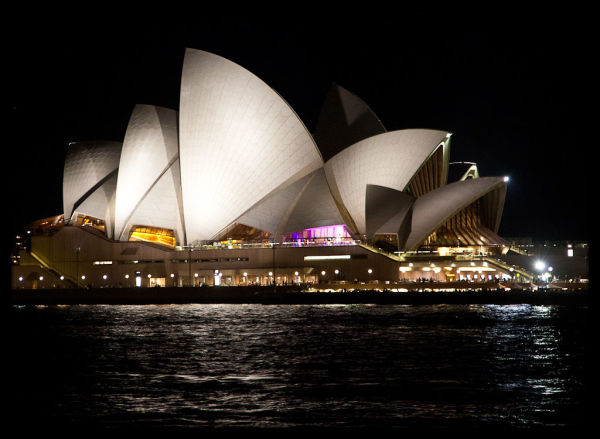 After the tour, Sara and I enjoyed a wonderful meal at a vegetarian Thai restaurant before trying to find Baxters, one of the top rated bars in the world. Baxters is hidden down an alleyway and when we finally found the right area, there were loads of people spilling out of two bars, neither of which were clearly signed. We went to the bar straight ahead and once inside discovered that it was not the Baxter Inn but instead The Barber Shop. The Barber Shop is a cool concept that is half barbershop and half cocktail bar. The atmosphere was cool and the patrons were clean-cut, fashionable hipsters. Sara ordered me a Feral Brewing Hop Hog IPA but I was disappointed that they didn’t serve it in a glass. I’m sure I could have asked but our plan was to just have a quick drink before moving on to the Baxter Inn.  Unfortunately, by the time we got outside a long lineup had formed outside the Baxter Inn and I decided it was not worth the wait (although I somewhat regret this decision after seeing the Baxter Inn appear on a list of the  Top 50 Bars in the world).

Disappointed I was unable to have a drink at the Baxter Inn, we went back to the Coogee Bay Hotel where I was cheered up by drinking beers and playing Big Buck Hunter and Pool with Jeremy and Sara.

On the last day of our two day stopover we went for breakfast with Jeremy and then he took us on a walk from Coogee Beach to Bondi Beach. Sydney’s coast is beautiful and we passed several parks and beaches which made me wish I could call Sydney home. There were lots of people playing volleyball, having picnics, and generally enjoying the outdoors which I absolutely loved. 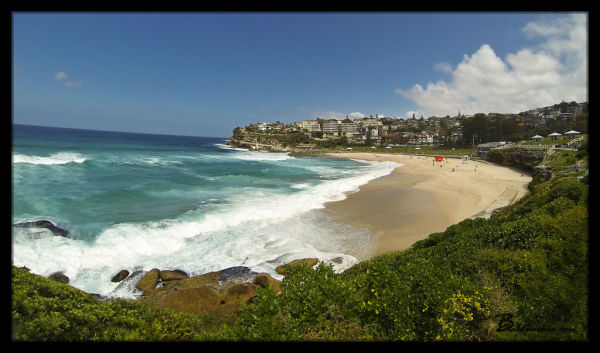 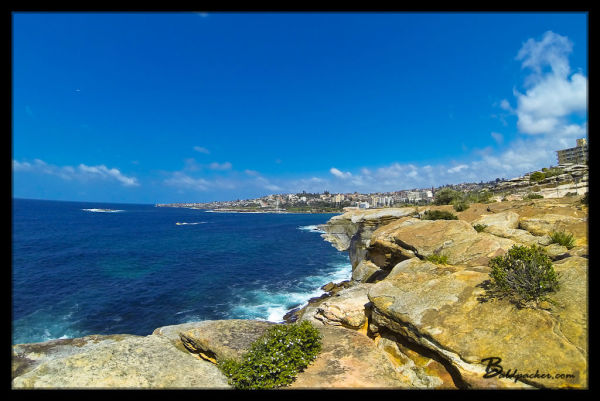 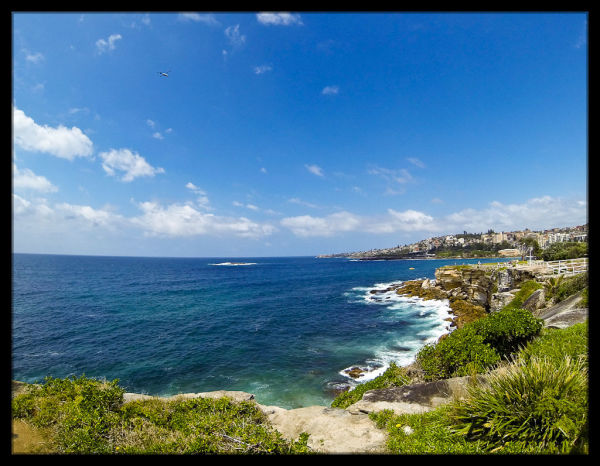 Before taking our $30 taxi back to the airport, Sara and I spent some time swimming and sunbathing on Coogee Beach which provided a perfect end to our Sydney stopover. 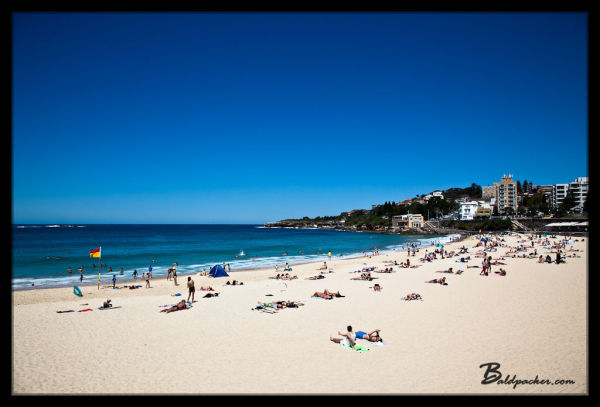 I was thrilled with how much we accomplished during our two night stopover and hope to stopover in Sydney again in the future. Kara and Jeremy were wonderful hosts and I hope that one day I will have a place with beach views so I can return the favour!