When we arrived in Launceston to begin our Tasmania road trip adventure it was already dark. Luckily, we had already arranged a campervan through Hertz AutoRent Campervan Rentals and the desk staff had everything in order when we arrived. I have to give extra kudos to the Launceston Hertz staff as they were extremely well organized and had everything in order for us to make a quick departure from the airport. We circled Tasmania counter-clockwise and this post focuses on our travels through Western Tasmania.

It is basically essential to have a vehicle to properly explore Tasmania and a campervan (or camping equipment) is great given the number of sites available for free camping.

Beautiful Views over Tasmania during our Campervan Road Trip

Since Sara and I did not want to search for a free camping spot in the dark when we first arrived, we drove to Longford Riverside Caravan Park where we had pre-booked a site for $28. One thing I’ve always been told in Australia is to be very cautious driving at night due  to all of the nocturnal animals and that point was proven when only 5 minutes from the airport I narrowly avoided hitting a Wallaby who jumped out on the highway. I decided right then that I would avoid driving at night as best I could during our adventure.

The next morning we drove to IGA to stock up on food for our journey, including 1kg of local bacon for $5 – yummy.

Plugging in our GPS, we adventured off towards Cradle Mountain National Park on Bogan Road (fitting name) hoping to find Liffey Falls. When we reached a beautiful viewpoint off Bogan Road, we pulled over and checked out our campervan’s cooking facilities. With the supplied stove and frying pan Sara and I took turns creating fantastic bacon, egg, and tomato wraps along with hot coffee for breakfast. 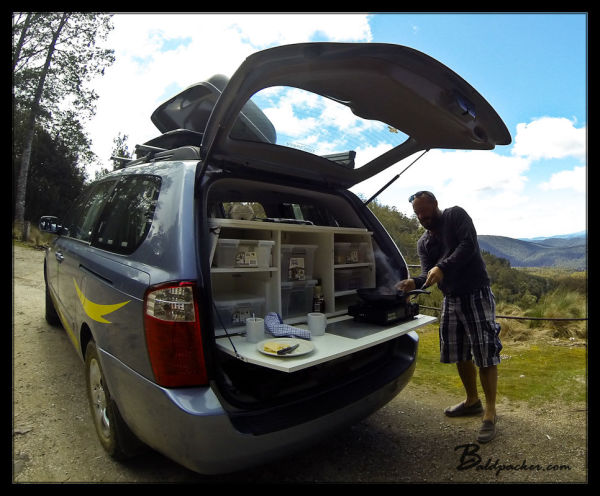 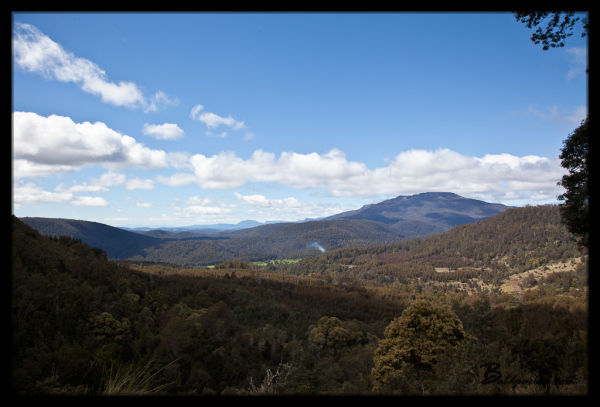 We first took the shuttle bus to the last stop at Dove Lake and did the hike around the lake. It was a nice trail and the scenery was quite nice. I think both Sara and I were just happy to be out of the campervan and enjoying Tasmania’s wonderful nature. 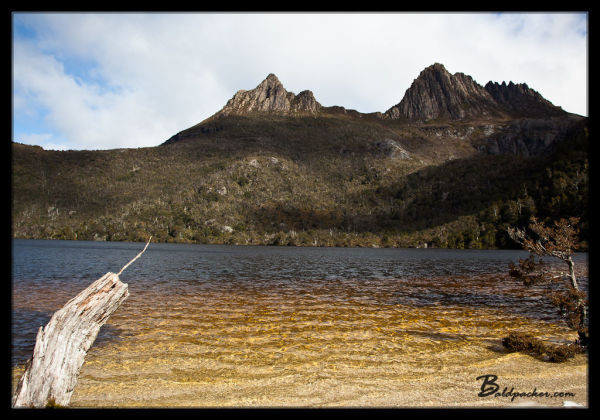 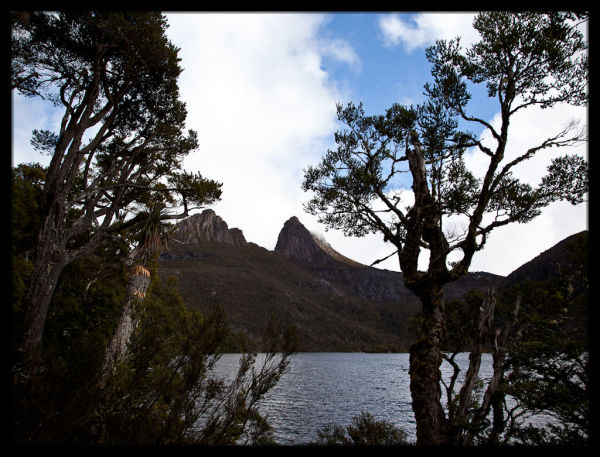 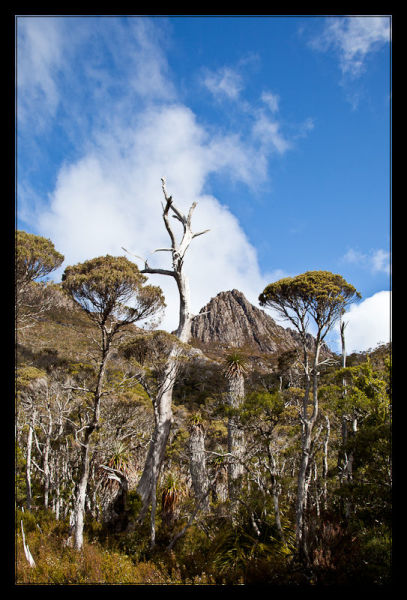 We made it back to the Shuttle Bus pick-up point in time to make one more stop so we went to Ronny Creek with hopes of seeing Wombats. The later afternoon was a great time to visit as there were half a dozen Wombats feasting on the lush grass. Rather than hike the entire boardwalk, Sara and I took our time to enjoy the Wombats before rushing back to catch the last shuttle bus of the day. 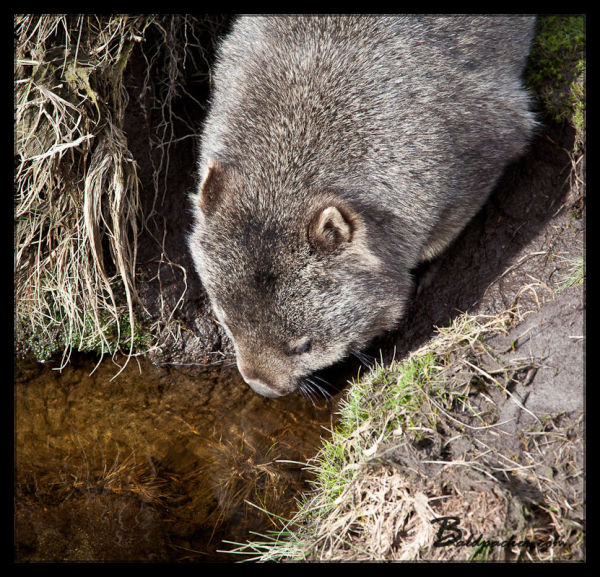 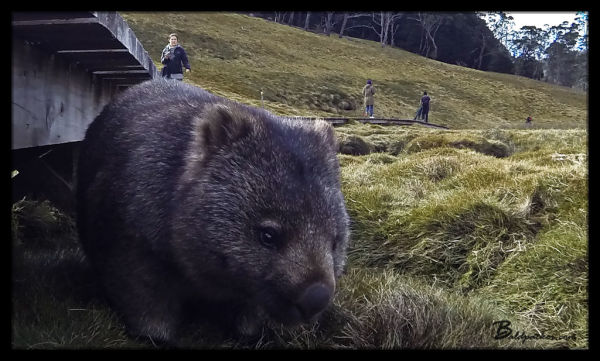 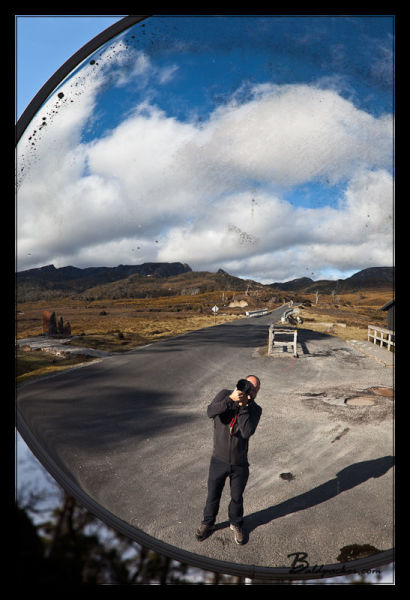 After returning to the Cradle Mountain National Park visitor center, I was beginning to get concerned about the sun going down and us still not knowing where to free camp. Thankfully, Sara had read about a good area to camp near Mackintosh Dam at a boat ramp and parking area. There were no facility at Mackintosh Dam but it was handy to have water available for washing our hands and dishes (but too cold to swim or bathe) and it was the perfect place to park our campervan for the night. We arrived at our free campground for the night just before sunset and explored the lake shore before setting up for dinner.

Sara at our Free Campsite near Mackintosh Dam, Tasmania

Sara cooked up delicious lamb, potatoes, and onions, which was gourmet considering our kitchen facilities in the back of the campervan. It was wonderful to eat our meal outside, especially since there were so few insects around at the end of September, but once the sun set the temperature dropped quickly. I got comfortable in bed while Sara stayed up watching the stars. Before long, Sara was startled by movement in the bushes and convinced me to go “flashlight hunting” for animals with her. It was amazing to see how many animals come out at night in Tasmania and we saw numerous Wallaby’s and an Echidna within a few minutes of shining our flashlights into the woods.

Wallaby out at Night near Mackintosh Dam, Tasmania

The next morning, we had another delicious bacon, egg, tomato, and coffee breakfast before driving to the trail head for the Montezuma Falls Hike. Montezuma Falls is Tasmania’s highest waterfall at 104 meters and can be accessed by a 7km return trail along an old tram line which had been used for mining in past decades. Although the trail itself is a nice flat grade, we found it to be quite soft and muddy due to recent rainfall and therefore it took us quite some time to pick our route. At the end of the trail we were rewarded with views of Montezuma Falls and a fun little suspension bridge out over the valley below. 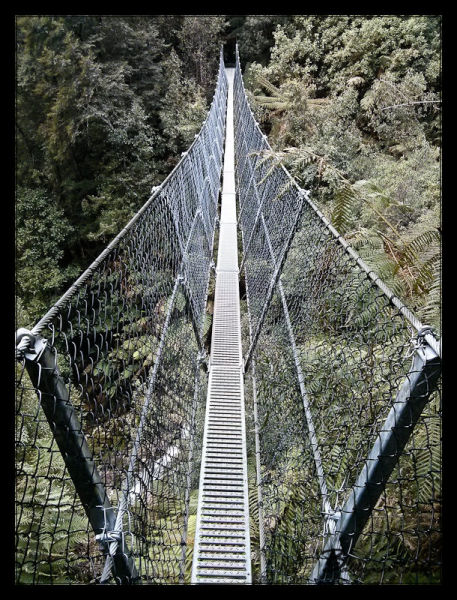 From Montezuma Falls we drove on to Queenstown, a mining town formed when gold and copper exploration started in earnest in 1892 on Mount Lyell.  Queenstown hosts fewer than 2,000 people today and Sara and I did not find a lot to see or do other than quickly walk around and look at the old buildings.

We then drove up past Queenstown on to Mount Lyell, which was once touted as the greatest copper mine in the world. Unfortunately, smelting in the early 1900s was extremely destructive to the environment and most trees in the area were cut down to fuel the smelters. Worse, the sulphur released from the smelting process killed most remaining vegetation and has left the area surrounding Queensland look like a yellow and pink moonscape which is apparently very popular among artists. Although ugly in many ways, the old mining area was also unique and beautiful in others. It was also a reminder of how important mining is to Tasmania and Australia and how much materialism and over-consumption can destroy the environment.

Abandoned Mine Views on Mount Lyell near Queenstown, Tasmania

Open Pit Mine Views on Mount Lyell near Queenstown, Tasmania

Once again, we were not exactly sure where to camp but managed to find a suitable site at the North end of Bradys Lake. It was an ugly evening due to the rain but we still managed to enjoy a nice dinner before tucking in for a solid sleep. 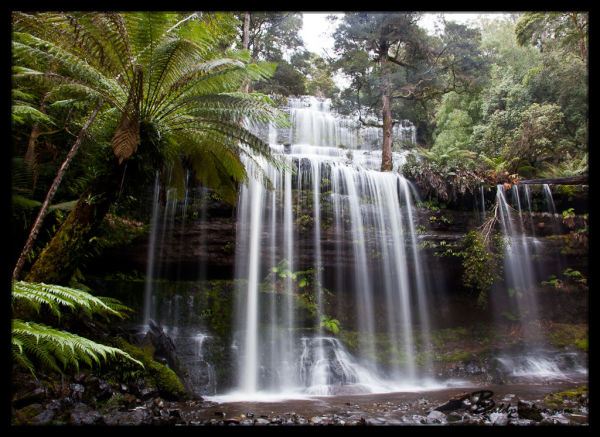 Western Tasmania is truly stunning and I really enjoyed driving through, and hiking in, the National Parks in the area.

Read on as my Campervan Road Trip Continues to Hobart