When I arrived in Bahrain, I was absolutely exhausted. I was supposed to arrive the evening prior, but instead touched down at 08:00 after a number of airline issues and an unexpected layover in Doha where I only managed a few hours of sleep. When I finally got to my hotel, the Holiday Inn Express, I was hallucinating from exhaustion. I had looked for a hostel, but Bahrain isn’t exactly a backpacking destination. I don’t think I even realized I was in Bahrain until I woke up 6 hours later after the most phenomenal sleep of my life. Knowing I only had a couple of days to see Bahrain, I quickly set out on foot to explore the city.

Wandering Bahrain on foot was strange to say the least. The temperatures were mild given it was December and there are large paved sidewalks everywhere, but I didn’t see another soul on foot. There were cars with dark tinted windows everywhere, but no people. The city gave me no feeling and I can’t help but describe it as ‘soulless’. I still enjoyed my exploration though as there were some beautiful buildings to see. The highlight was definitely the Bahrain World Trade Center, which ingeniously incorporates three 225kW wind turbines into its design. Given Bahrain’s location on the sea, there was a steady breeze throughout my walk and the turbines were constantly turning. A shopping mall called Moda is incorporated into the building and it is filled with expensive luxury designer stores. Once again, the only people I saw were the staff, who stood motionless like the manikins spread throughout the large sparse stores. 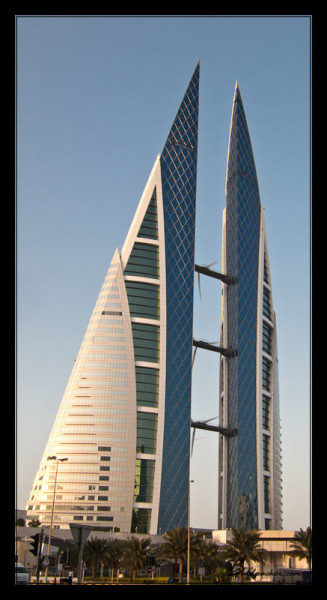 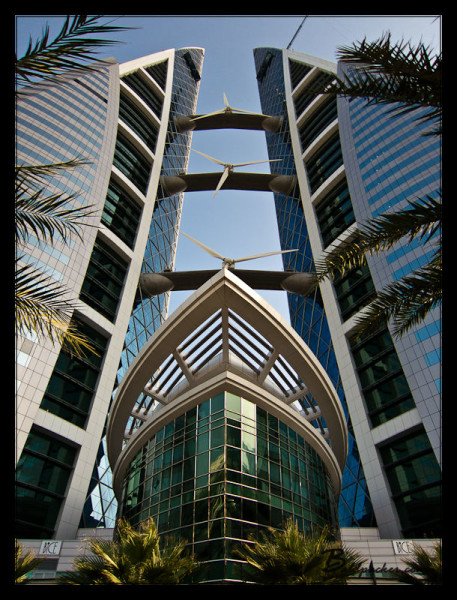 I kept exploring, looking for any sign of life in the city. As I wandered I came across a few interesting mosques, as well as Bab Al Bahrain, meaning Gateway of Bahrain. Bab Al Bahrain was built in 1945 and it marks the entrance to the Manama Souq. The gateway once stood close to the water, but due to all of the land reclamation that has occurred in Bahrain it is now a few kilometers inland. 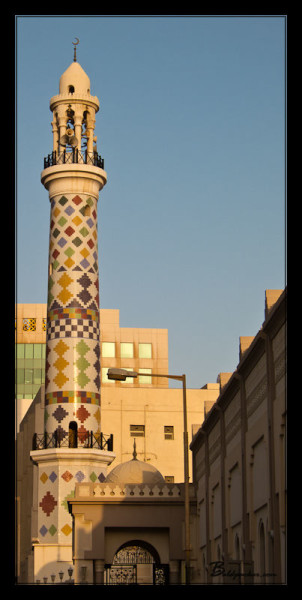 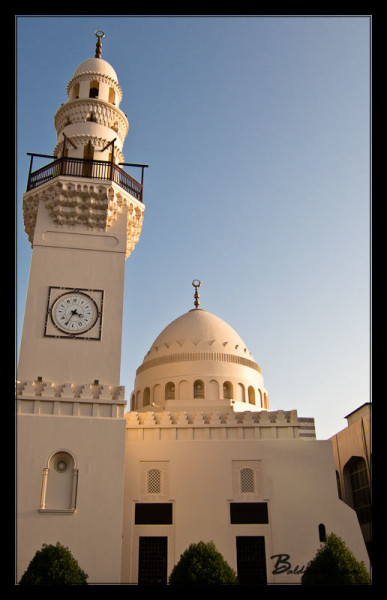 After realizing there really wasn’t much else to see or do in the area I was, I headed to the Bahrain National Museum, which was not too far from my hotel. I immediately fell in love with the architecture of the building and walked around the exterior absorbing the beautiful designs. Next door to the museum is the National Theater, another beautiful building that is well worth taking a walk around. After absorbing all of the exterior architecture, I paid my 1 BD admission fee and looked inside the museum. My favourite part of the entire museum was the floor, which was covered with a large satellite image of Bahrain. It was great walking around and being able to see all of the little towns and areas covering Bahrain’s 55 x 18 kilometer main island. The museum itself had some interesting displays but after an hour of viewing the exhibits I was ready eager for dinner and a beer. When I exited the museum, the sun had set and I had to stop and once again admire the beautifully lit building. 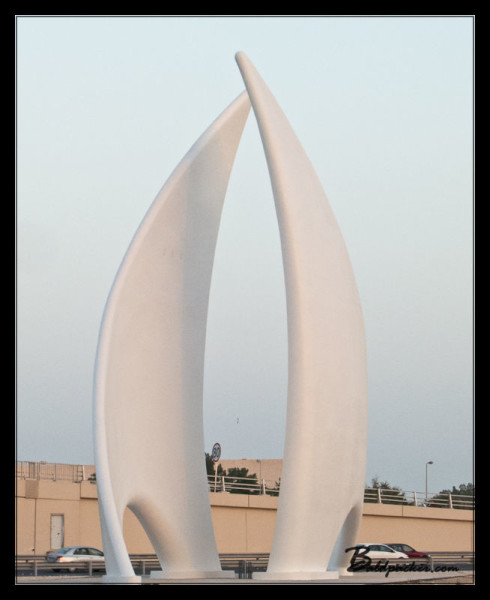 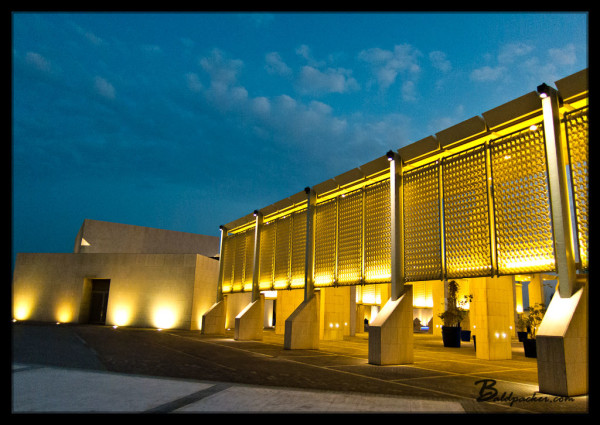 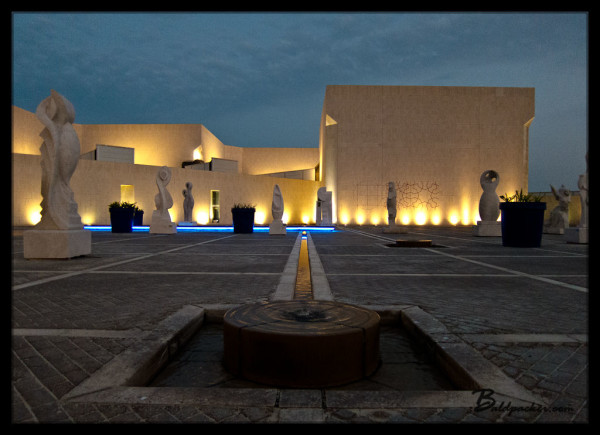 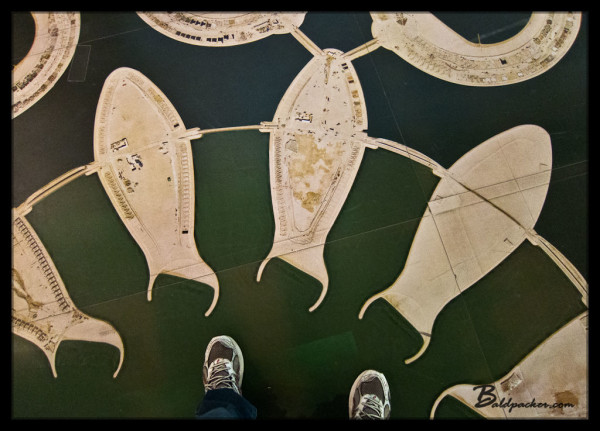 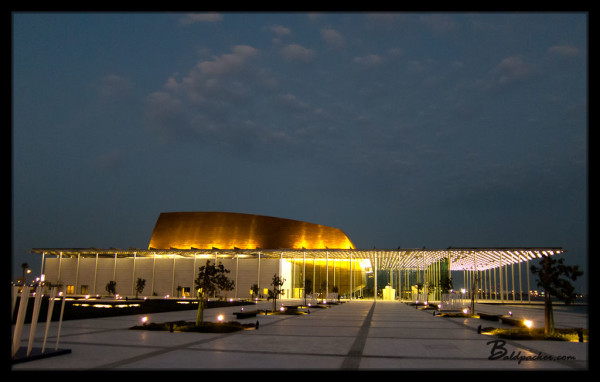 Bahrain has long been a place for expats living or working in Saudi to go for a drink. When I was researching good places to go out in Bahrain, I kept reading Warbler Pub was popular. Part of the reason I decided to stay at the Holiday Inn is because Warbler, on the ground floor of the Baisan International Hotel, was just across the street. I saddled up to the bar, ordered a beer and a delicious Chicken Burrito, and was soon chatting with a bunch of drunk Irish guys who had obviously been in the dessert too long and were quickly burning up their cash on double red bull vodkas. Bahrain greatly reminds me of Dubai in the sense that on the surface everything appears to be traditionally Arabic and Islamic, but hidden away there is a seedy world of excessive drinking and prostitution. Before long, the Irish had had about enough of the former and were in search of the latter so when they hailed a taxi to go and find Russian girls I decided to call it a night and walked back to my hotel conveniently located a short crawl away.

As I felt like I’d already seen and done most of what there was to see and do in Bahrain on foot, I decided to just sleep in and do some work. As the afternoon rolled around I decided I better get outside and get some exercise and I walked over to the Al-Fateh Grand Mosque. The mosque is one of the largest in the world and has enough capacity for 7,000 worshippers. Although visitors can enter the mosque for tours, I chose to just view the mosque from the exterior. As I’d skipped breakfast and lunch and it was nearly 5pm, my stomach was growling and I decided the only place that could adequately quiet my hunger was the Warbler Pub. The evening before I’d noticed that Thursday was “Steak & Pint Night” and I was eager for both. I ordered a delicious 14 oz. Porterhouse for 9.9 Dinars and was rewarded with a free pint since it was a Thursday. After my meal I got to chatting with American and British expats who were on their way home from Saudi for the Christmas Holidays. The British gentlemen mentioned that on Friday Warbler puts on a Frunch (fun filled Friday Brunch) which is an all-you-can-eat-all-you-can-drink exercise in gluttony that only costs 18 Dinar. Sold on my plan for the next day, I once again crossed the street for some sleep. 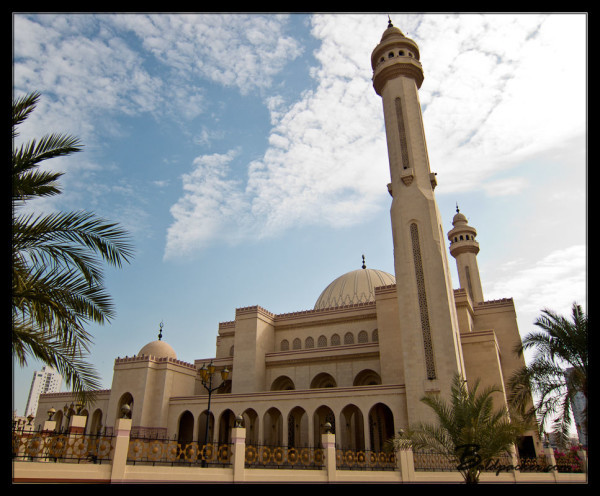 The next morning I checked out of the Holiday Inn, put my luggage in storage, and went back to my favourite pub in Bahrain for the Frunch party. Unfortunately, I was the only solo attendee to the Frunch and it seemed like a lot of groups had gathered for Christmas holiday celebrations. It was all still fun and enjoyable for me though as the food was delicious, the drinks were strong, and I had nothing better to do that day.

After a couple hours of eating and drinking I received a message from a CouchSurfer I had got in touch with named Sherief. Sherief was on his way to Australia to travel with friends and had offered to drive me to the airport as our flights were at approximately the same time. I always love meeting people on my travels and in cities or countries that do not have any hostels I’ve discovered that the CouchSurfing website can be a great way to meet locals. Sherief was actually living in Saudi but had found a cheaper flight to Australia out of Bahrain so he’d driven over for the day. He had a few errands to run before going to the airport so I joined him and he explained a lot of things to me about Bahrain that I hadn’t known. He pointed out how many Saudi license plates there were around the city and explained that a lot of Saudis came over to Bahrain to shop and watch movies. Apparently, movies in Saudi are very heavily censored and it can get to the point where the movies no longer make sense. I assumed they’d censor nudity and profanity, but apparently even things like men and women holding hands can be cut from films. He also pointed out an area where the protests in Bahrain had occurred. He said that it had been a large round about but that the government had made it disappear. Sure enough, there was no longer a round about, but there was a noticeable police presence as well as quite a bit of barbed wire surrounding the area.

Once we got to the airport, I wished Sherief a safe trip to Australia and headed my own way back to Doha. Overall, I wouldn’t consider Bahrain a tourist destination and there was nothing about the country that gave me a sense of excitement or culture. While I’m happy I saw what I saw, it’s the type of place that could only keep me busy for a couple of days and I was happy to move on to somewhere new after a couple of days.

← Choose Your Own Attitude: My Qatar Airways (Mis)Adventure
My Stopover in Doha, Qatar →