My Stopover in Doha, Qatar

On my way back to work from Bahrain, I decided to take a 2 night stopover to see and experience as much of Doha as I could. Doha is not really a backpacker destination, but still offers some interesting sights and is perfectly suited for stopovers. 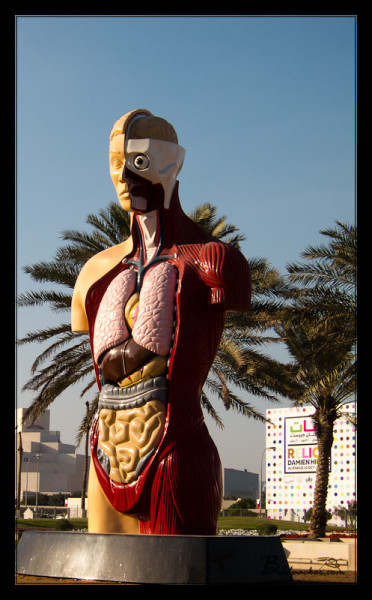 Strange Art on the Doha Corniche

When I arrived in Doha for my planned visit, I was already more than familiar with the airport and arrivals process due to my previous flight delay and unexpected overnight layover in the city. You can read more about that misadventure here. Unfortunately, this time Qatar  Airways wasn’t picking up my visa and I had to pay for it like everyone else, at a cost of 100 QR (US$ 28) payable only by card.

As I passed the duty free store on arrivals I noticed a massive pyramid of Nutella. I honestly had no idea the delicious nutty spread was so popular in the Middle East and couldn’t believe it when I saw massive 5 kg jars for sale. Many of my Middle Eastern friends love nuts and sweets, so I guess it makes sense Nutella would be a big hit in the region. I guess they needed something to display in Duty Free to replace the usual shelves of alcohol, which is not allowed into Qatar (but available in hotel bars).

Once I entered the arrivals terminal, I noticed the Moevenpick Hotel had a booth. I told them I had a reservation and asked if they had a shuttle to the hotel to which they replied yes, but it would cost 60 QR. Part of the reason I chose the Moevenpick Hotel Doha was because it’s so close to the airport and decided it made more sense to keep walking and flag down a taxi (which ended up costing less than 30 QR on the meter).

I booked the Moevenpick Hotel Doha for only 70 Euros per night, which for Doha I thought to be quite the deal. The main reason I chose the Moevenpick over cheaper hotels were for its location, which is both close to the airport and close to Doha’s Corniche. Traffic in Doha can be terrible, and given I was only going to be in town for 2 days, I thought it made a lot of sense to stay on the airport side of the Corniche rather than further into the business district. The receptionist was very friendly and I found my room to be big and spacious. Although I was placed on a non-smoking floor, I did find there was a slight smell of smoke in my room. Unfortunately, from speaking to people who work in the hotel industry, a lot of Arab and Asian customers ignore the no-smoking signs which I imagine to be what happened in this room. In any event, I thought the room was great value and I would highly recommend the Moevenpick to others looking for a place to stay in Doha.

By the time I was settled into my room it was already late evening so I decided to just rest up for the day ahead. The next morning, I woke up and went directly to the gym for a quick workout, followed by a steam room session to sweat out the toxins I accrued in Bahrain’s Warbler Pub. Feeling nicely refreshed, I returned to my room to discover things a lot of urgent work e-mails in my inbox. Sadly, this monopolized the rest of my morning and a large part of my afternoon, but I was finally able to get out and actually start seeing Doha at 3pm.

My plan involved starting at the Museum of Islamic Arts and walking 7km North up the Corniche to the Sheraton Doha Resort & Convention Center, where I had read there was an Irish pub that would certainly have Guinness on tap. My first stop was the Museum of Islamic Arts, a beautiful building on the South end of the Corniche towards the Doha Airport. The museum was designed by I. M. Pei, who had previously worked on the construction of the Louvre Pyramid in Paris. Wikipedia reports that at the age of 91, Pei was coaxed out of retirement and spent six months traveling the Muslim world to learn about Muslim architecture and history to draw inspiration for the design. I must say that he very much succeeded as the Museum of Islamic Arts is one of the most impressive buildings I have ever been in. I spent more time admiring the beautiful architecture and design than I did actually seeing any of the museum’s exhibits. The museum sits on its own island and has a beautiful view across the water at Doha’s skyline. I sat down in one of the many comfortable seats available in the main foyer and sipped on a coffee while taking it all in. 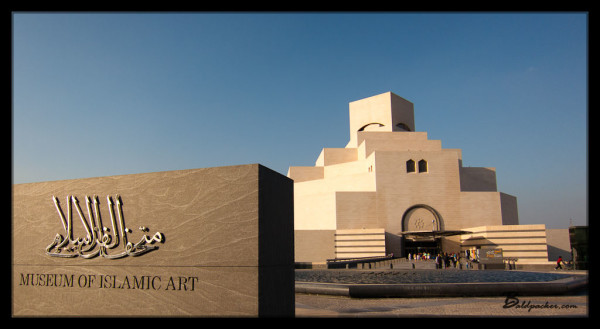 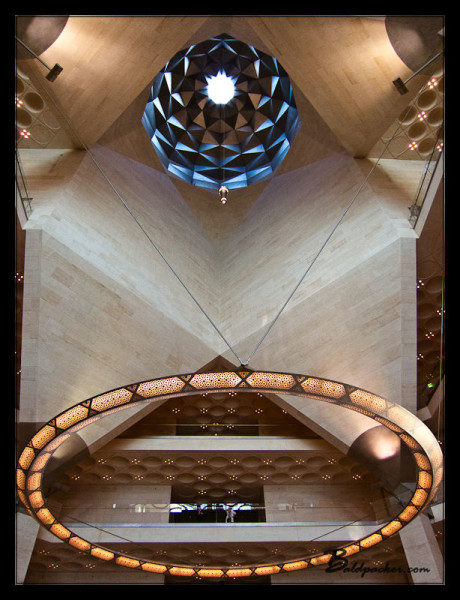 Finding the energy to concentrate in my cup of coffee, I climbed the stairs of the museum to begin taking in all of the exhibits. There were hundreds of examples of Islamic art on display, including many historic artifacts. I took the most interest in the old scientific instruments on display, such as the many astrolabes, which are essentially 2D maps of the heavens which show the movement of the stars. The museum contains the oldest surviving Islamic astrolabe, from 9th century Iraq. The whole museum greatly reminded me of the number of Arab inventions and scientific discoveries that have contributed to the progression of society over the years. I found the entire museum exceptional, especially given it was FREE, but knew I had to get moving if I was going to walk the remaining 7km of the Corniche before dinner. 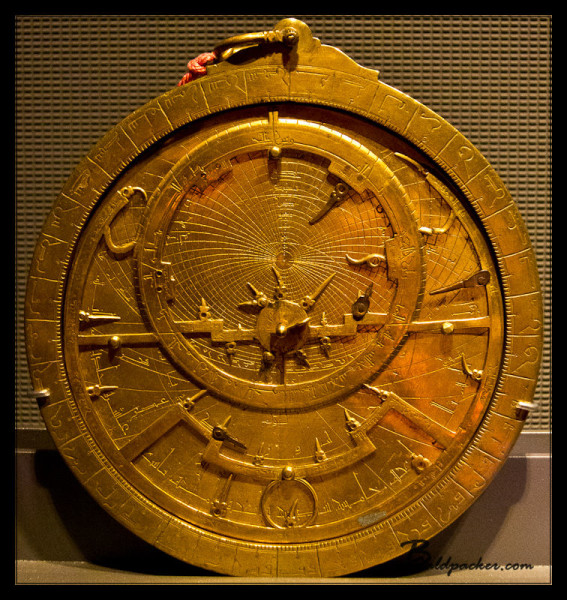 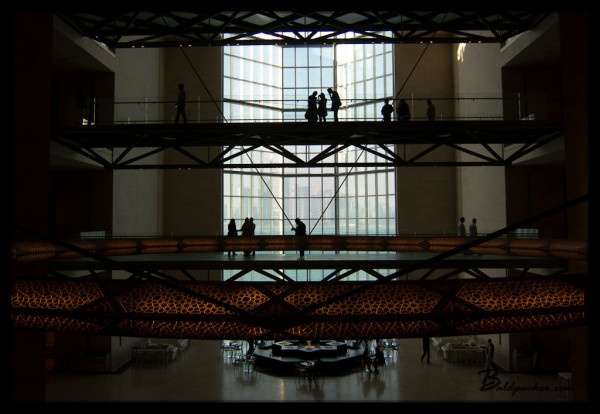 The Corniche was beautiful and I was happy to see so many people using it. There were families out picnicking on the grassy areas and lots of people running or walking for exercise on the paving stone walkway. Coming from Bahrain, where I hardly saw a soul moving on foot, it was refreshing to see so much activity. As I walked down to Corniche I saw a lot of interesting art installations, buildings, and architecture. First, the The Emiri Diwan is the seat of the Qatar government and it is a grand, imposing building, with beautiful views over the business districts skyline. Some of the skyscrapers were clearly influenced by traditional Islamic techniques, while others were brightly lit modern technological marvels that would have easily fit in with the buildings of Tokyo, Hong Kong, or Shangai. 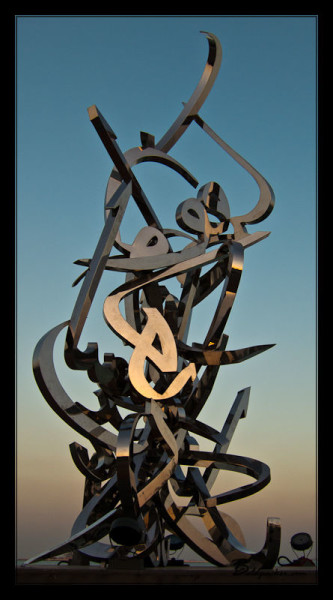 My favourite buildings were the Tornado Tower, Al Bidda Tower, Burj Qatar, and Al Hitmi Commercial Development back near my hotel. 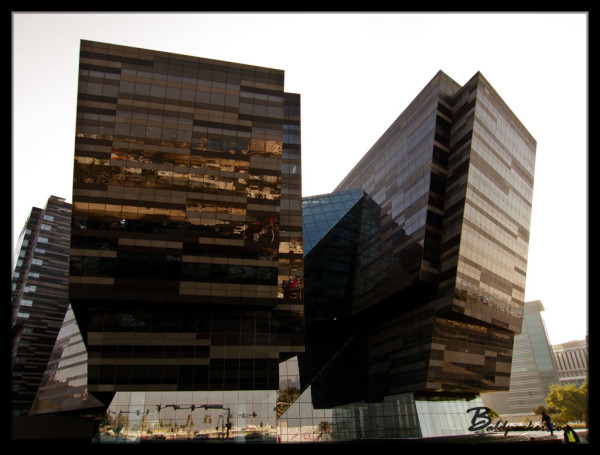 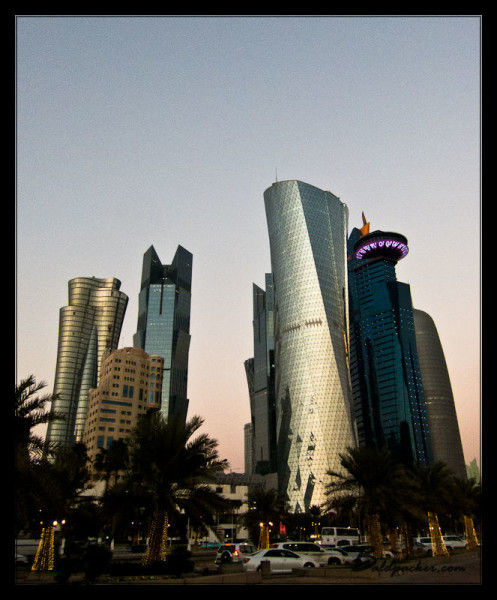 Once I finally made it to the Sheraton I found my way down to the Irish Harp pub for dinner. They asked for my passport which was apparently a requirement to get into the pub. I sweet talked the Filipino working the desk to let me in, but it’s good for others to know to carry a copy of your passport at all times in Doha. I have since downloaded a copy of my passport on to my smart phone so it is always with me. Inside, I ordered a 90 QR burger (US$25!!!) which was one of the cheaper options on the menu. Thankfully, the cost of Guinness wasn’t quite as extortionate at 30 QR (US$8), so I treated myself to a couple of them as well. Needless to say, a meal at an Irish Pub in Doha certainly costs more than it would in Ireland, but after walking over 7km I felt like I deserved it. 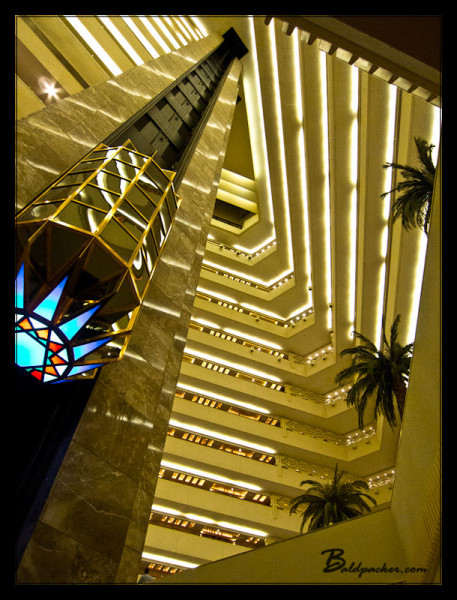 After filling my tank with food and beer (for more than it would cost to fill a Land Cruiser’s tank with petrol) it was time for me to make my way back to the Moevenpick Hotel. After the sun set it was much colder on the windy Corniche, but I was looking forward to seeing all of the skyscrapers lit up at night. As expected, many of the buildings were beautiful. The one surprise was the beautiful dancing orange lights that seemed to randomly crawl over the Burj Qatar, making it my favourite building in Doha. 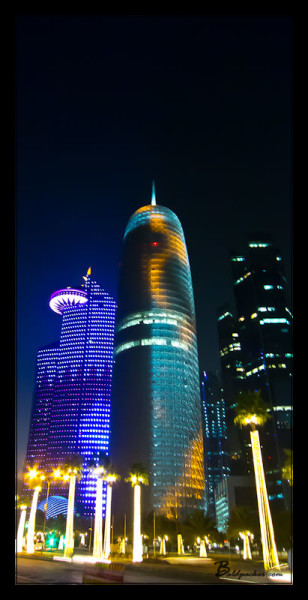 After returning to the hotel, I caught a good night’s rest, packed my bags, waived down a taxi on the streets, and returned to the airport (11 QR for the taxi from the Moevenpick).

Overall, Doha wasn’t a bad place, but it wouldn’t be my first choice for a tourism destination. If I were offered a job opportunity there I would consider it, but still think Dubai is better suited for westerners from a lifestyle perspective. The highlight of Doha for me was certainly the architecture, so if buildings and design are your thing, Doha may be worth a quick visit.