Cruising the Eastern Caribbean over Christmas

One thing that long-term travelers and overseas workers quickly learn is that they miss a lot of holidays. I have missed more Christmases, birthdays, weddings, and long weekends than I can count. That is why, when I finally managed to get a Christmas off, I was very excited to tell my parents that I would finally be home for Christmas.

Mom: “That’s great son. You can use our house, but your father and I will be cruising the Caribbean over Christmas.” 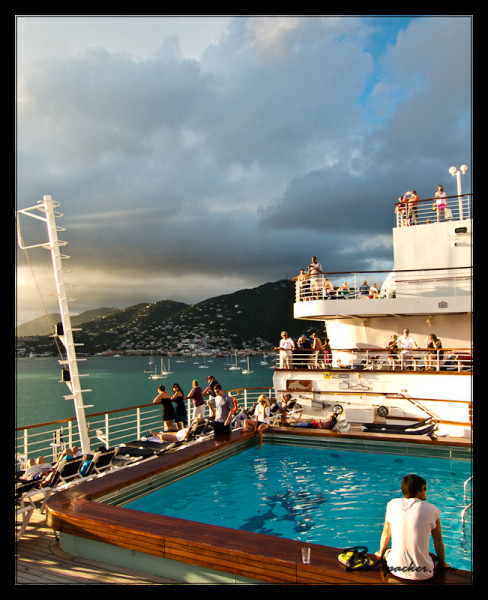 Chilling in a Pool on the Ocean

After this news sinking in, I realized it was actually a wonderful opportunity for me to go somewhere warm for the holidays, still spend time with my parents, see parts of the Caribbean, and find out if cruising was a method of traveling I would enjoy. Unfortunately, my parents had booked the cruise on a deal whereas I had to pay full fare, but it was still well worth it to see them over the holidays. Since the cost for two people was only slightly more than that of a single person, I invited my friend Sarah along, who had been working long hours as a lawyer on Wall Street and I new would enjoy some beach time.

We boarded the Grand Princess in Fort Lauderdale on December 22nd, 2012, and set course for San Juan, Puerto Rico. I had booked the cheapest option available, which was an inside berth, and despite not having natural light I still found it to be large and comfortable given I didn’t plan to spend much time in the room over the holiday.

After two days of sailing, we arrived in San Juan where we were able to explore for the afternoon and evening. Our first stop was El Castillo de San Cristobal, a Spanish fort that is open from 9am to 6pm. As the fort was meant to protect Spaniards from a land based attack on the city of San Juan, it offered excellent views over San Juan and the ocean below. After exploring the fort, we walked in a counter-clockwise direction towards the citadel of El Morro. On the way, we came across the municipal cemetery of Santa Maria Magdalena de Pazzis and a wonderful park, where we just sat in the grass watching kids fly kites and families picnic. As the sky turned to dusk we decided to skip El Morro and head back into town for dinner and a mojito. Puerto Rico is, after all, the home of Bacardi. I had really hoped to do a tour of the Bacardi factory while in Puerto Rico as I really enjoyed my Havana Club factory tour in Cuba, but given it was Christmas Eve and Puerto Rico’s Catholic ways, the rum factory was unfortunately closed. 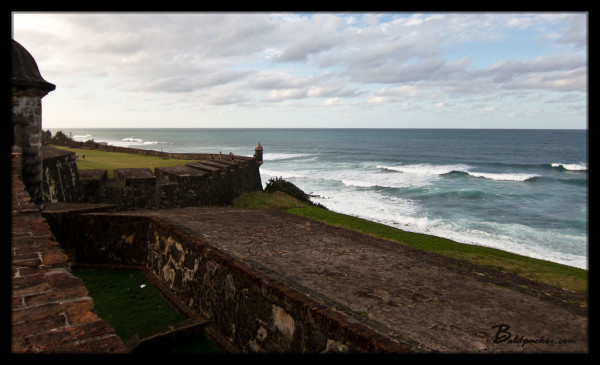 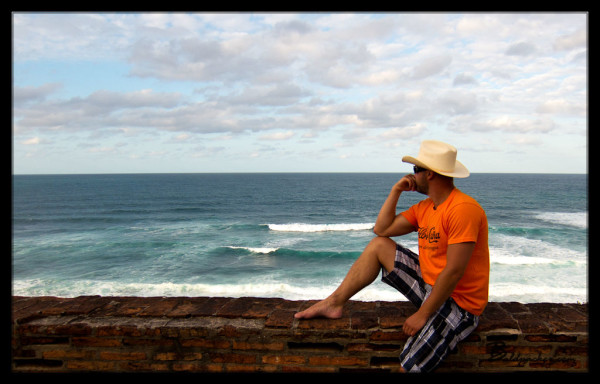 Enjoying the View From Puerto Rico 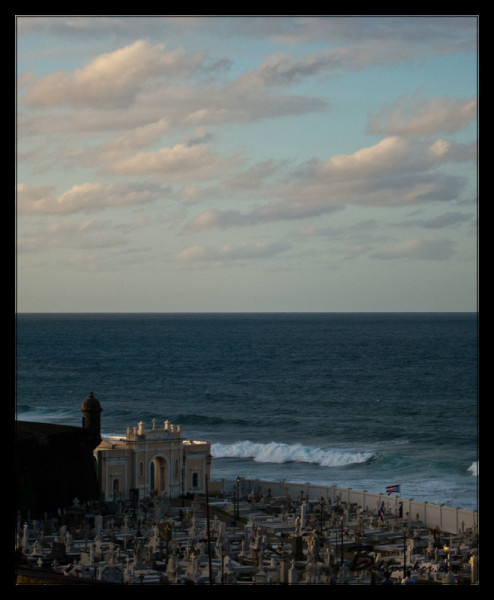 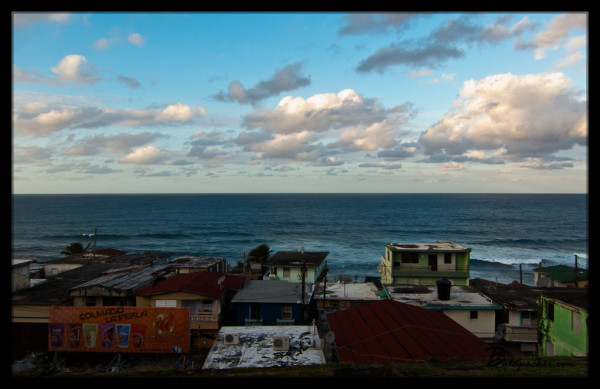 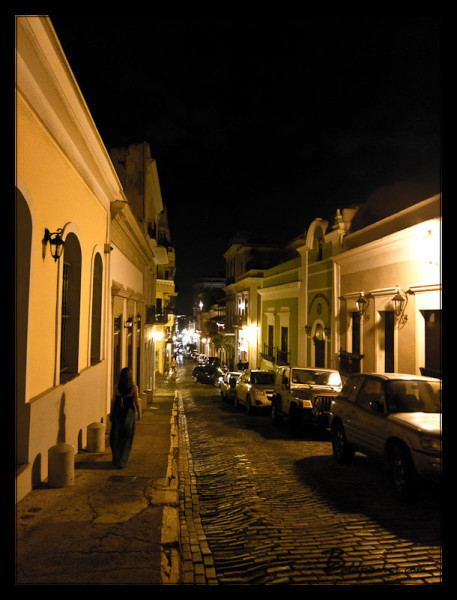 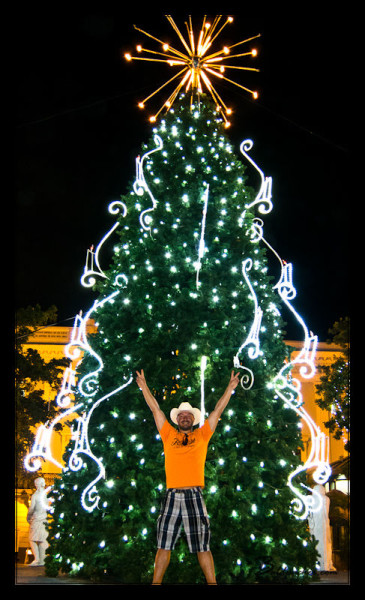 Dinner and the mojito were wonderful though and we still had time to wander the town at night before having to re-board the ship. Old San Juan is just like Spain in that it is full of beautiful plazas, churches, cathedrals, and historic buildings. After finding a massive Christmas tree in a plaza for that must have Christmas card photograph, we found a nice outdoor terrace where I could try a local Medalla beer. Our time in San Juan was short, but I did quite like the Old Town and would be happy to explore it again one day.

My Mom advised me that they key to enjoying cruises is to take part in all of the activities, so each evening I did my best to attend a show of some sort. The entertainment on cruise ships is exceptional and there were lots of options including movies, music, comedians, magicians, Spanish lessons, trivia quizzes, art auctions, and of course pools, bars and a gym. Although I enjoyed the entertainment, I think the best part of cruising is going to bed and waking up in a new country without the hassles of packing or changing accommodation.

Christmas morning, I woke up to St. Maarten, Netherlands Antilles. Thankfully, I’d spent some time drinking beers in the hot tub with a professional cruiser who had been to St. Maarten before. He recommended we go to Maho Beach, where Princess Juliana International Airport has a short landing strip that begins right where the beach ends. After baking in the sun for a while I decided it was time for a beer (or perhaps an iced bucket full of beers) so I asked a gentleman if he’d mind watching our towel, bags, hats, sunglasses, etc. As we ordered drinks from the bar, suddenly we heard an aircraft throttling up to take off and everyone on the beach scatter. Of course, the thrust from the engines threw back a massive force of wind and blew our things all over the beach, leaving the poor gentlemen scrambling to try and track down the things he was supposed to watch. We rushed back and had a laugh about it all and managed to recover all of our belongings after a few minutes of searching. Lesson learned, don’t set-up for your day on the beach directly behind the runway. It was great talking to the man who had been watching our things though as he had previously been on the management team of the New York Islanders and since it was winter back home, it was nice for me to talk hockey while soaking in the sunshine on Maho Beach. He also mentioned to us that Air France would be landing an A340 later in the day, the biggest aircraft to use the runway, and that it was the reason he had come to the beach. 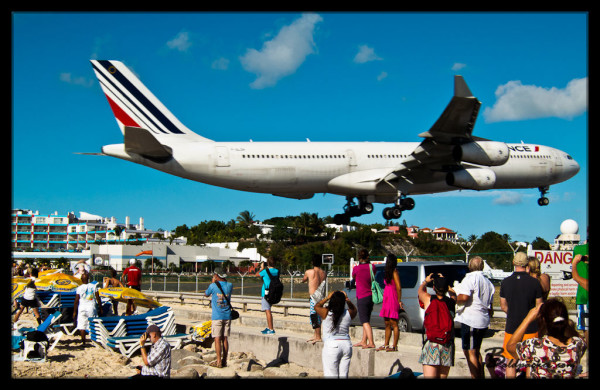 A340 Landing Over Maho Beach 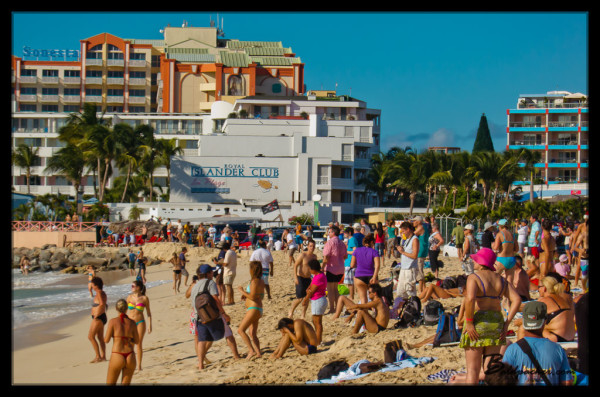 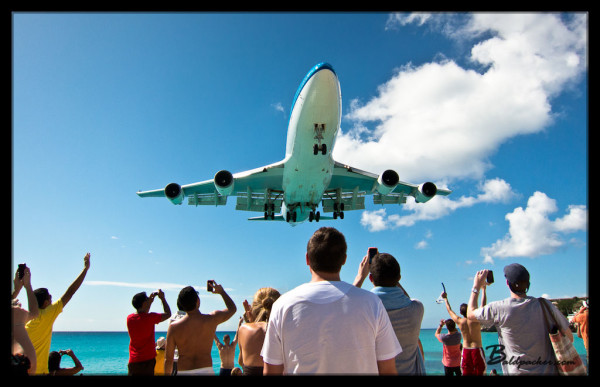 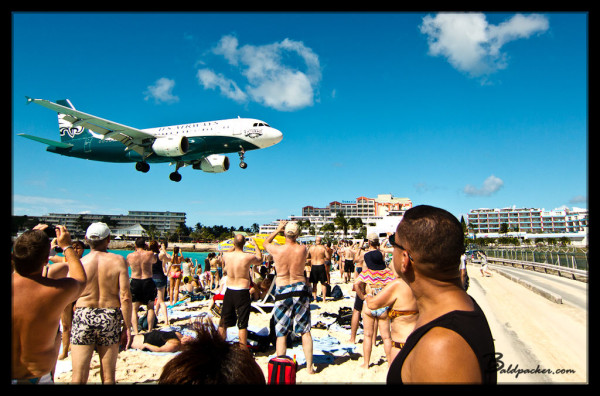 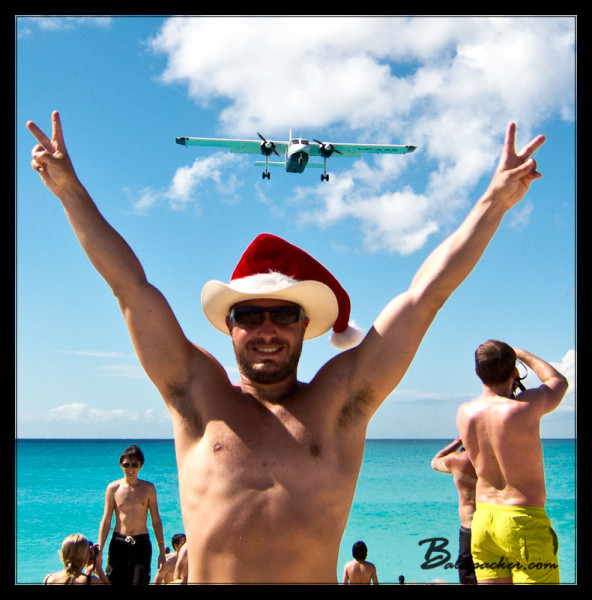 Although the A340 landing was pretty cool, my favourite memory was that of a small twin prop plane which did its best to roll all the way back to the fence separating the runway from the beach before putting on its brakes. At that point, the co-pilot opened his door, leaned out wearing a santa hat and huge smile, and waving to everyone before throttling up and sandblasting the entire beach. It was pretty funny for all of us holidayers and it must have been a good laugh for the pilots as well. My least favourite memory was definitely being behind the A340 when it took off. I’m not sure if everyone was on the beers that day or if we just had holiday brain, but quite a few of us lined up on the beach behind the A340, some people wearing swimming goggles and snorkel masks with the hopes of protecting their eyes. I’ll put this experience down as one of the worst ideas I’ve ever had as almost immediately after the A340 began to throttle up I was pelted with sand so hard that I couldn’t do anything but drop to the beach as though I was under heavy fire from an opposing army. Thankfully, I survived the sandblasting and took away a nice exfoliated back from it all. Having seen the biggest aircraft of the day, we decided to make our way back to the ship for a nice Christmas dinner and outdoor poolside movie. It was honestly one of the best and most memorable Christmases I’ve ever had and watching the aircraft land just meters above the beach provided endless entertainment for me. I not only want to return to Maho Beach one day, but I’d also love to land at Princess Juliana International Airport to see how it all looks from the sky on approach.

On Boxing Day, we landed at St. Thomas, US Virgin Islands.  St. Thomas is well known for duty free and jewelry shopping given its tax status, but I was more interested in doing some diving. Prior to arriving at St. Thomas I had booked a diving excursion through Admiralty Dive Center and was really looking forward to it. When I woke up in the morning I had a few pre-dive jitters but still went looking for the large windmill they told me to meet them at. After searching and searching and asking many locals where the large windmill was I finally gave up. It ends up that we had berthed in a different area than scheduled and therefore I was at the wrong port for them to pick me up from. Given the number of cruise ships that were in St. Thomas over Christmas I’m sure they weren’t too concerned over losing one customer, but it was very disappointing for me after having made all of the preparations so long in advance. One problem with cruise ships is that unless you’re willing to pay extortionate amounts for internet and phone usage, you’re basically disconnected from the world (though I’d argue this is also a good thing!)

Thankfully, when you’re on St. Thomas, there are lots of things to do other than dive and we joined my parents and headed to Magens Bay, a nice long beach in a sheltered area that makes the water very nice for swimming. After exploring the beach and soaking in enough sun for the day we headed back to the port where Sarah and I found a small bar in a gazebo that had swings for seats. Ever since that day, I’ve wanted to open a “Swingers Bar” somewhere. I tried an “Island Hoppin’ IPA” which had been locally brewed by St. John Brewers. It was a tasty treat after a day on the beach and concluded our short but sweet visit to the US Virgin Islands. 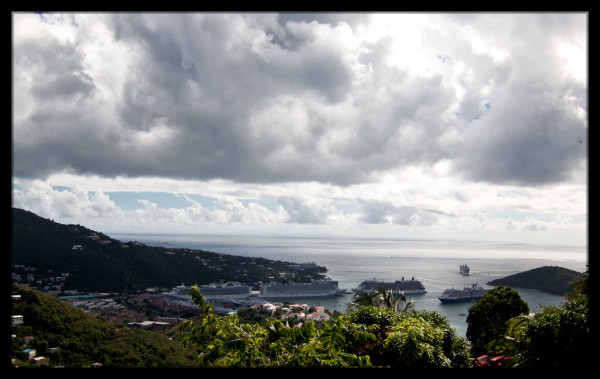 View of the Port While Driving to Magens Bay 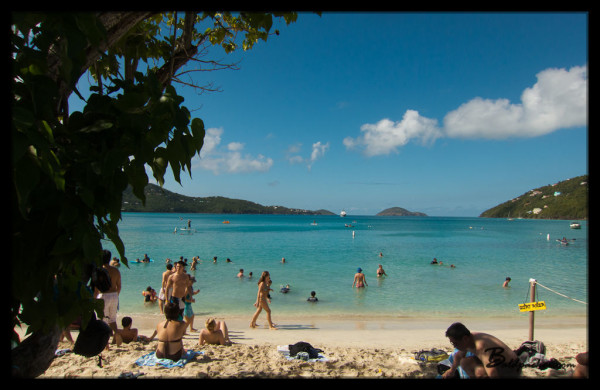 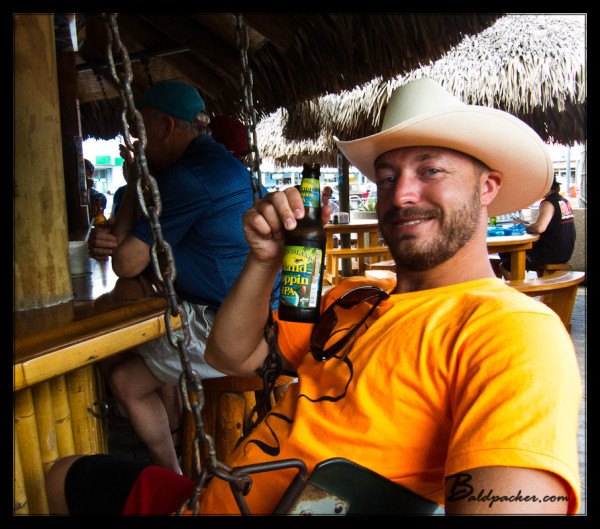 After a day at sea that was filled with shuffle puck, pool time, naps, food, and movies, we arrived at our final stop, the Princess Cays Island in the Bahamas. Princess Cruise lines had essentially purchased the island and set it up as a beach resort for its cruise ship passengers. We had to board passenger tender boats to get to the resort through the shallow water, but it was a nice place given there were lounge chairs, beach volleyball courts, and other activities available free of charge. Sarah and I paid for Sea Kayaking, went swimming, and of course, I had to try a local Kalik beer. 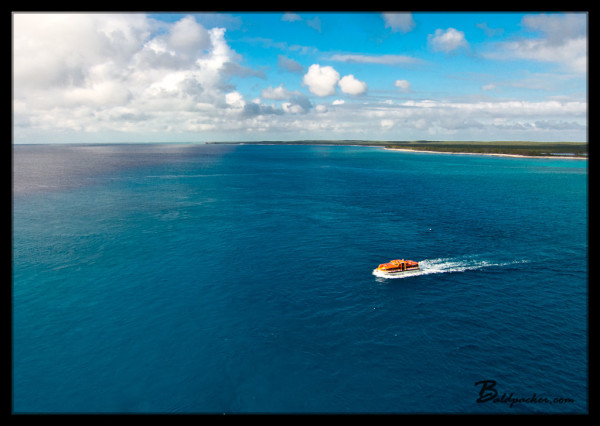 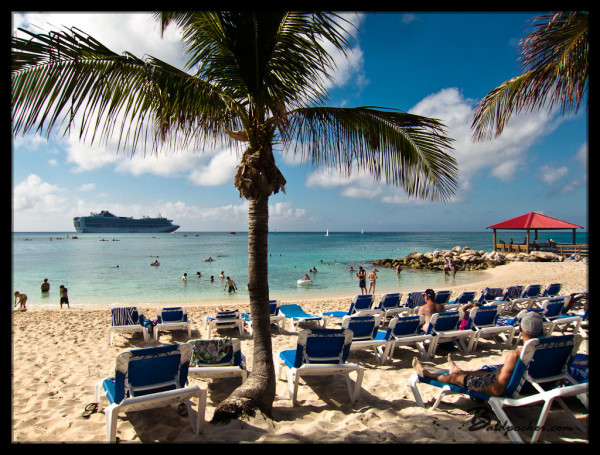 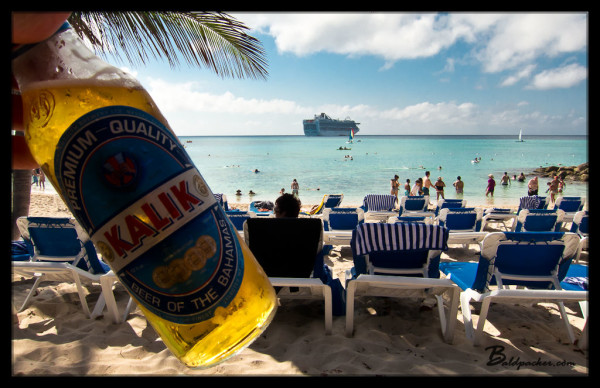 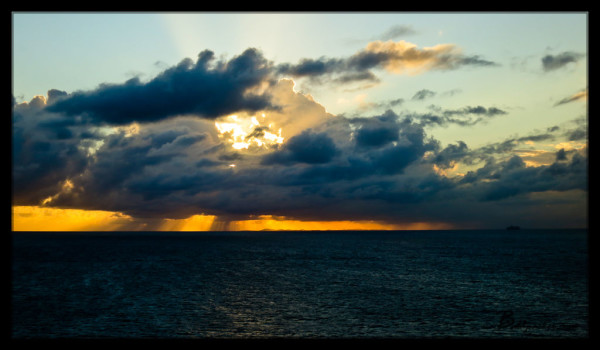 I definitely enjoyed the cruise and can see the appeal to cruising, but I don’t think I’ll trade in my backpack for a cabin berth quite yet. It’s a great way to get around quickly and easily see countries and sights, but I found it very difficult to get a feel for each island and its culture. My main recommendation for cruisers is to get as far away from the port of call as possible as the port areas solely cater to foreigners and lack any local qualities you may discover further astray. While on the ship, I wholeheartedly agree with my Mother’s advice to take part in as many activities and events as possible. If you keep an open mind about it all, cruising can be a wonderful experience and I look forward to doing more when I’m older and no longer have the energy to rough it as a backpacker.

2 Comments on “Cruising the Eastern Caribbean over Christmas”