Aachen, Germany, is not typically a tourist destination, but in February 2012 I spent 3 weeks in west Germany, North Rhine-Westphalia to be exact, visiting my friend Clarissa, whom I had met in Paris the previous fall. Clarissa was attending medical school at Aachen University and I was busy finishing my Masters thesis so her apartment became our academic institution on weekdays, and our hub for day trips to Bonn, Cologne, and Belgium on weekends.

For me the best part of staying in a small, non-touristy German city was that I got to experience normal day-to-day German life and hang out with locals, which is often difficult to accomplish when on a typical European backpacking trip. I found routine ‘boring’ activities such as visiting the supermarket, returning bottles for deposit, taking out the garbage, and checking books out from the library as unique and interesting cultural learning experiences that I would never experience while staying in a hostel. Even this German garage door that looks like a face made me laugh: 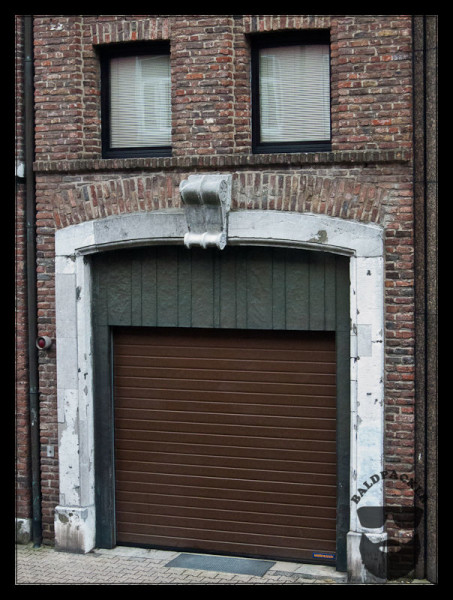 Germany is renowned for its efficiency making it a perfect place to consider and compare the effectiveness of their systems against those I am used to in Canada and elsewhere internationally. I also love the contrast of historic and contemporary German architecture so just wandering the streets of German cities is enjoyable for me. For example, even this bus stop in Aachen was worth stopping to take a look at: 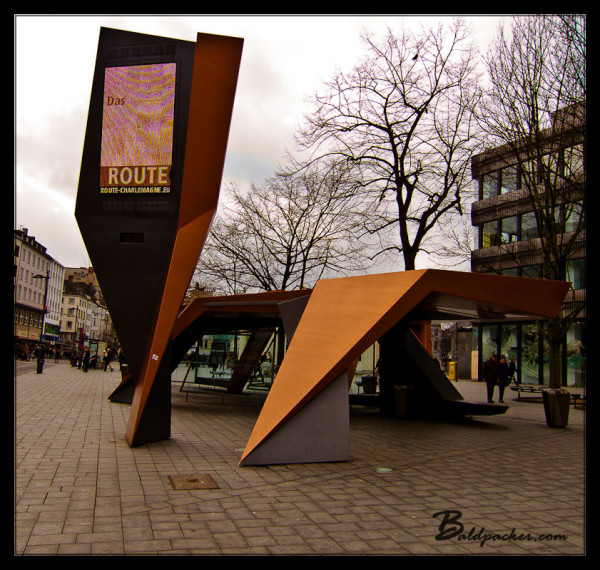 Another great thing about Germany is that the supermarkets tend to offer great food at affordable prices. They have delicious meats, cheeses, and fresh vegetables, and most importantly, lots of delicious and cheap German beer!

Aachen is a city of around 250,000 people in Germany’s far west, on the border of Germany, Belgium, and the Netherlands.

The main attraction in Aachen is the Aachen Cathedral, which is one of the most famous examples of occidental architecture. 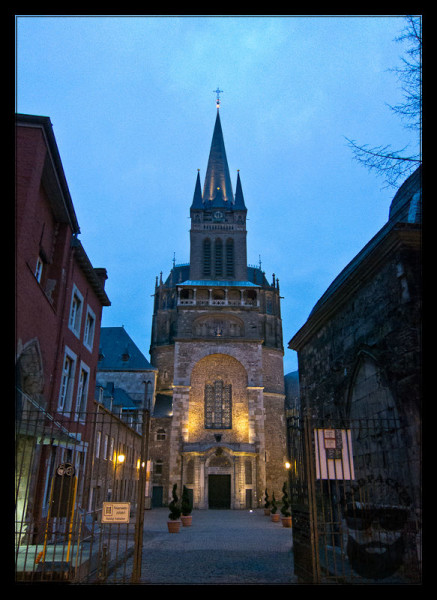 Charles the Great, or Charlemagne, began the construction of the Palatine Chapel around 792. It was consecrated in 805 by Pope Leo III in honour of the Virgin Mary. Through the centuries, many other constructions and decorations were completed. Today, the Aachen Cathedral is a unique and beautiful two-story cathedral of classical pillars, bronze railings, golden masterpieces, glassworks, etc. Between 936-1531, 30 kings and 12 queens were anointed, crowned and enthroned here. In the Middle Ages, it was one of Christendom’s most important venues for pilgrimage, together with Jerusalem, Rome and Santiago de Compostela, and became the first building in Germany to be appointed as a UNESCO World Heritage site. The entire area around the Aachen Cathedral is worth exploring as it showcases Aachen’s historic architecture and trendy shops and restaurants. 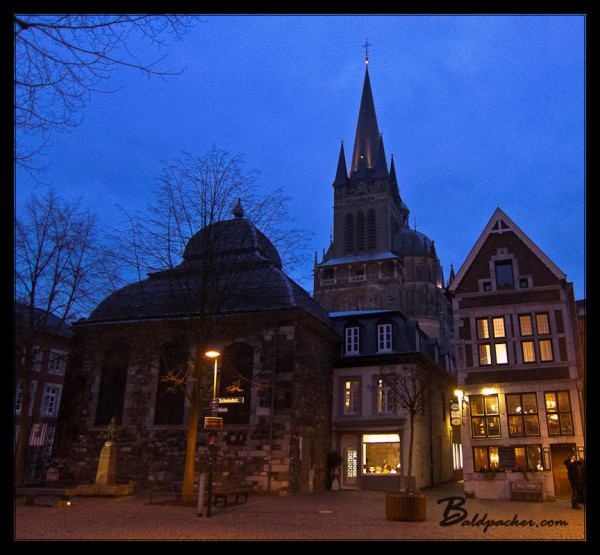 Aachen is a student town due to the large Aachen University, which enrolls over 42,000 students, making Aachen a fun city for going out in. The place to go for bars is the Pontstraße, which begins at Markt facing the historic city hall, and ends at the Ponttor. There are many beautiful patio areas that were not open when I was in town due to the cold weather, but it looks like it would be a great place to be in the Summer. 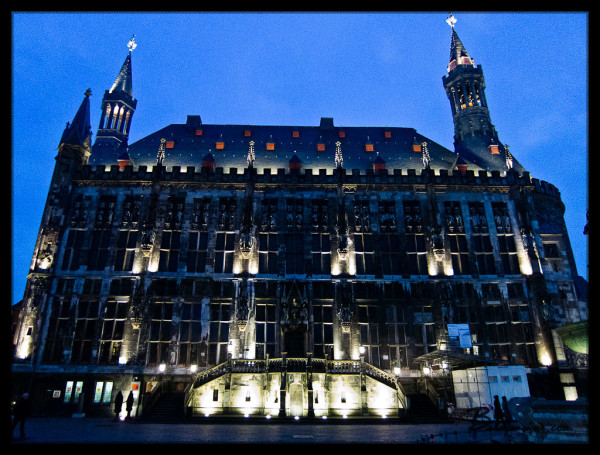 I went to a couple of really neat bars while I was in town. The first is called Kopfkino, which was a hair salon / bar that I believe has now closed. It was a really nice bar in my opinion, but you could tell it was a pretty close-knit group of locals that hung out there. My local Aachen friends thought it was a rougher group, but I still enjoyed the concept of a combined hair salon and bar, which at that time was a new concept to me (it seems to be spreading all over the world now). When we were in the bar, they had a big screen up showing the previews for the Klitschko vs. Chisora boxing match, which was happening in Munich that night. We didn’t stay at the bar too long since we were going to a friend’s to watch the fight, but I found it funny that when we left, around 10pm, there was a guy getting his hair cut by a gal who I had just seen smashing tequila shots a few minutes earlier. I would have loved to see the final haircut!

The other bar I really enjoyed was called Die Wg, which is basically a bar in the form of a house. The main bar is in the ‘kitchen’ area, which is decorated with appliances, food products, and even a vacuum cleaner. In the back, there is an ‘office’, complete with a desk and old computer. The men’s washroom did have a couple of urinals, but on the sink counters you also found toothbrushes, gels, deodorant, and cologne – just like at a house party. The bar definitely attracted a hipster student crowd, but it had a cozy house party vibe and offered 1 euro shooters so I thought it was a fun concept for students.

Although the main place to celebrate Carnival is in Cologne, it is celebrated all over North Rhine-Westphalia, and on Rose Monday Clarissa took me to check out the local parade. Apparently there are Carnival clubs, which spend the entire year building floats for the parade. The parade in Cologne is supposedly the biggest, but I thought the parade in Aachen was great too. Bands played, people danced, beer was consumed, and some of the floats were great. The crowd was all in costume, beer stands were available for those seeking refreshment, and the people riding the floats threw loads of candy into the crowd. Now that’s how a parade should be!! 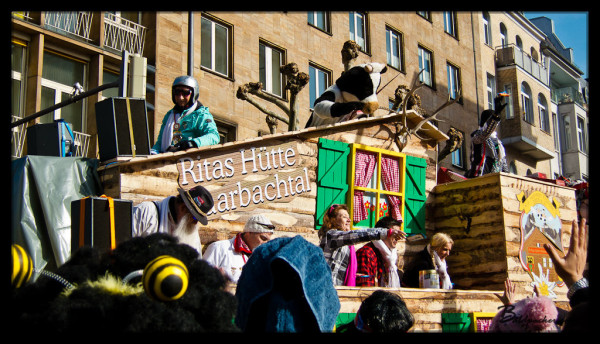 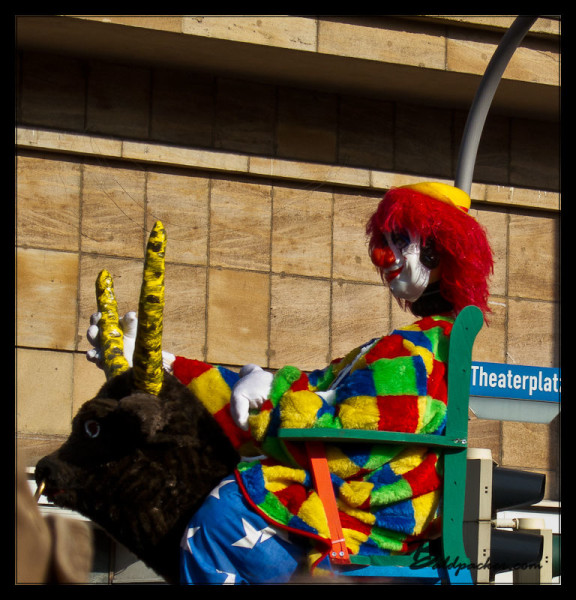 In general, I would not consider Aachen a tourist destination, but it was a great place for me to spend some time experiencing regular day-to-day German life. If you are in the area of Aachen, it is definitely worth checking out Aachen’s cathedral, but I wouldn’t allocate more than an afternoon to visiting the city. If you are a student considering attending a German university, Aachen University is definitely worth considering. I have heard it is a great university to study, but Aachen is also ideally located for weekend trips around West Germany, and into Belgium, and the Netherlands.