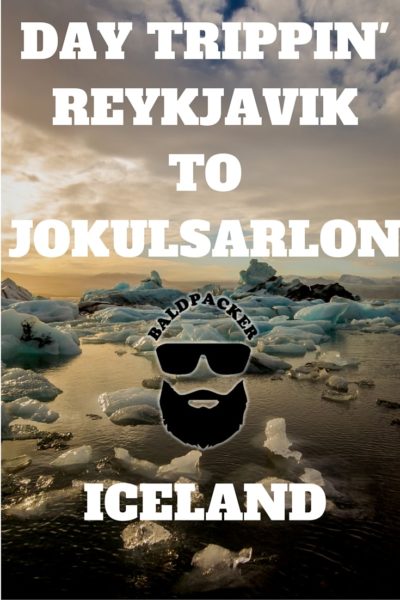 Driving the South Coast of Iceland

Iceland is a sparsely populated and expensive country which can make solo budget travel quite difficult. Tours are very expensive and since many of the best sights are in remote parts of the country, having your own set of wheels is almost a necessity. 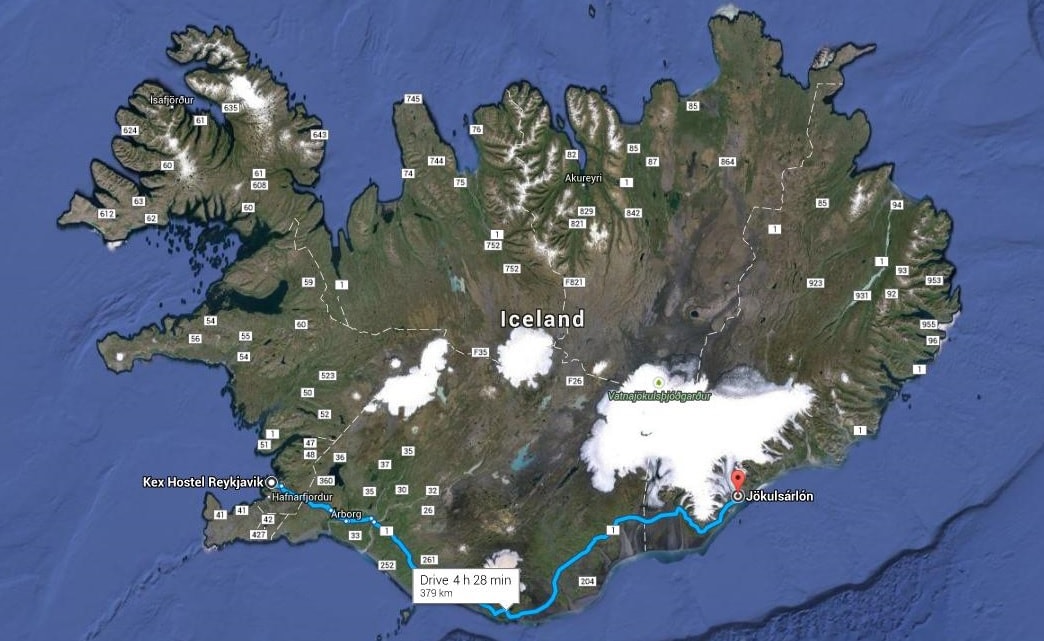 The cost of gasoline is high in Iceland but luckily I found three other people in my hostel, Kex Hostel, who were also interested in driving Iceland’s south coast. The hostel has a tour desk so we asked them to arrange the rental for us through a nearby agency.

I am always skeptical of rental car agencies so I ensured they marked all of the nicks and scratches on their rental form before we departed. It was good I did because upon return they tried charging me for damage they had not marked on my copy of the form, but I had thankfully made them mark on their copy. It’s always a good idea to also take pictures of the rental car before departing as these bogus charges happen far too often, even in developed countries like Iceland!

Since we were planning to drive 800 km to see the Jokulsarlon ice flows and return back to Reykjavik, we did not have a lot of extra time for stopping, but thanks to the late summer sunset we were still able to see quite a bit. The scenery from the car was incredible and watching the topography change over the journey showed how diverse a landscape Iceland has. 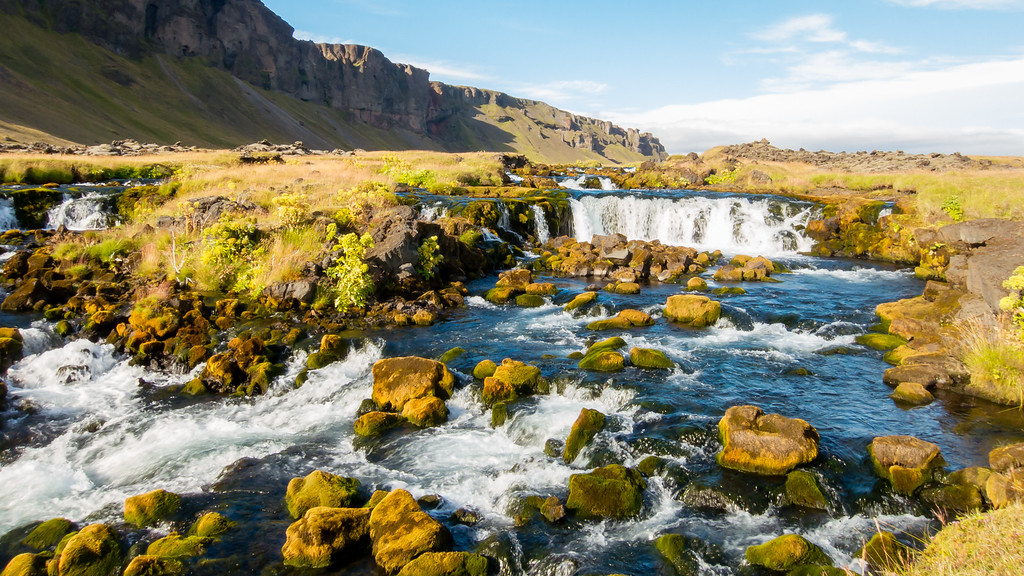 A Beautiful River Next to the Highway

I had not researched or planned the driving route in advance but thankfully my co-pilots knew about the Seljalandsfoss and Skógafoss waterfalls.

Seljalandsfoss is a beautiful 60 meter waterfall and what makes it fun and unique is that you can easily walk behind the falls. 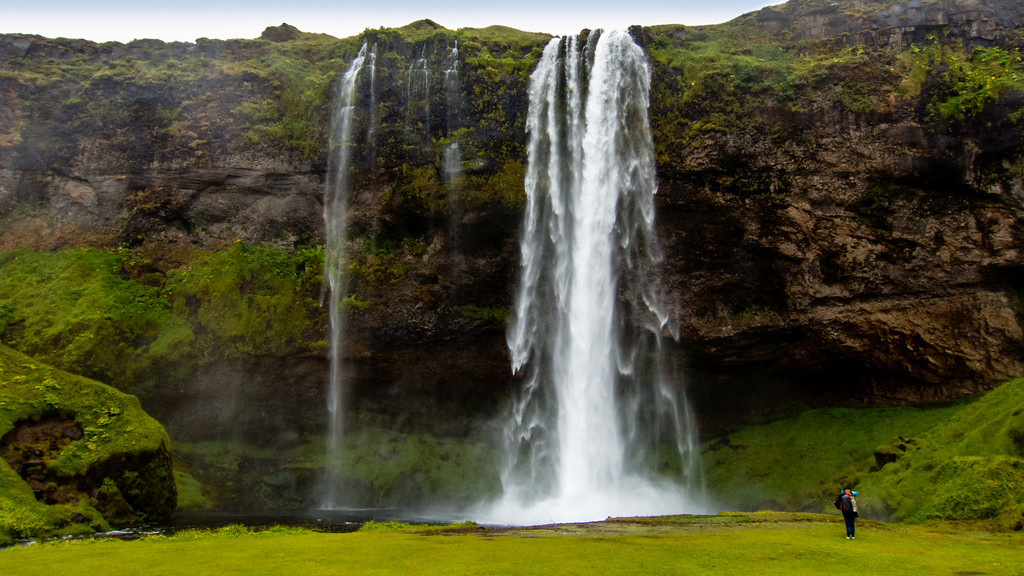 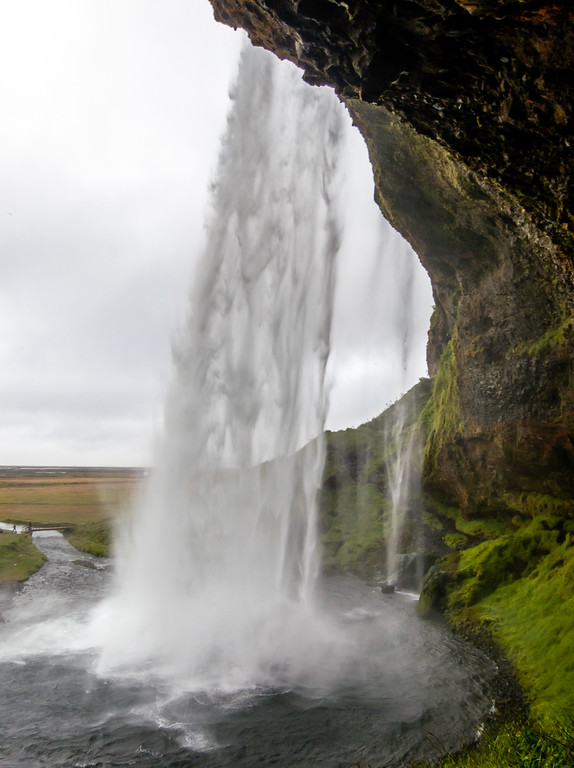 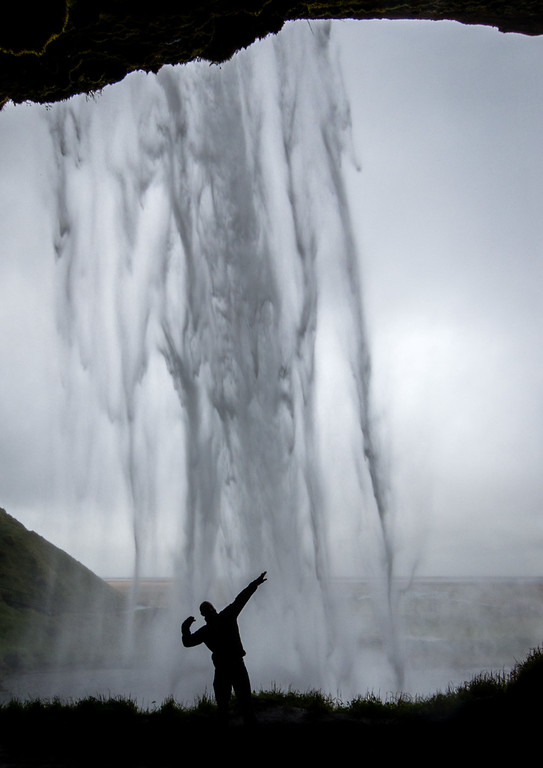 Skógafoss is a big and waterfall, 25 meters wide and 60 meters high, that you may have seen on calendars or screen-savers before. The heavy mist from the falls means you will get wet if you get too close so pack a rain jacket if you want to feel the power! 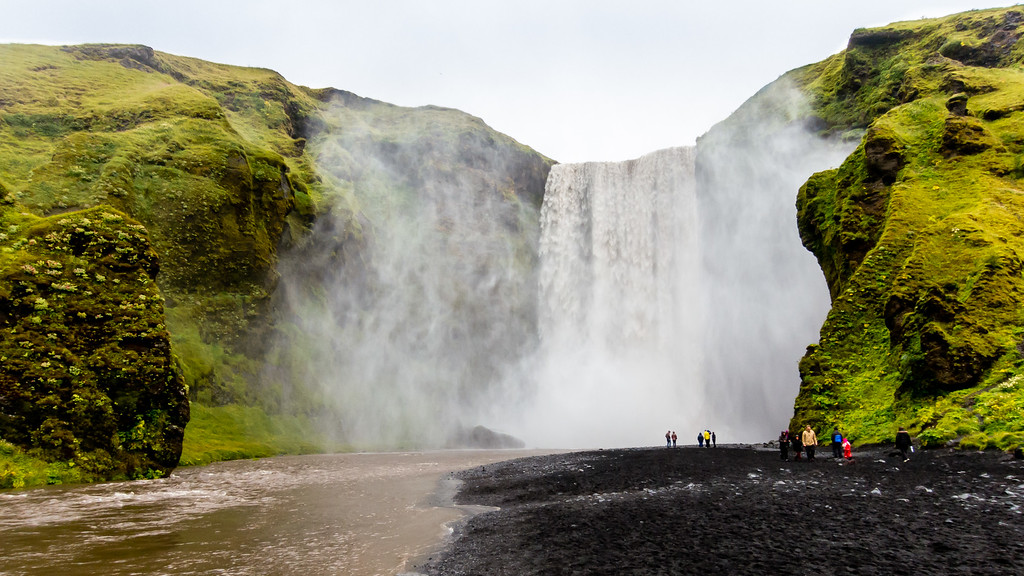 After a quick stop in Vik for lunch and gas, we stopped to see the beautiful basalt sea stacks called Reynisdrangar. Legend has it that two trolls were unsuccessful in dragging a three masted ship to land and when daylight broke the masts became needles of rock.

Near Reynisdrangar are the black sand beaches of Reynisfjara and rock arch of Cape Dyrholaey. Unfortunately we were tight on time so we did not have time to explore them but we did find another natural rock arch that I risked my life climbing on for a photo. 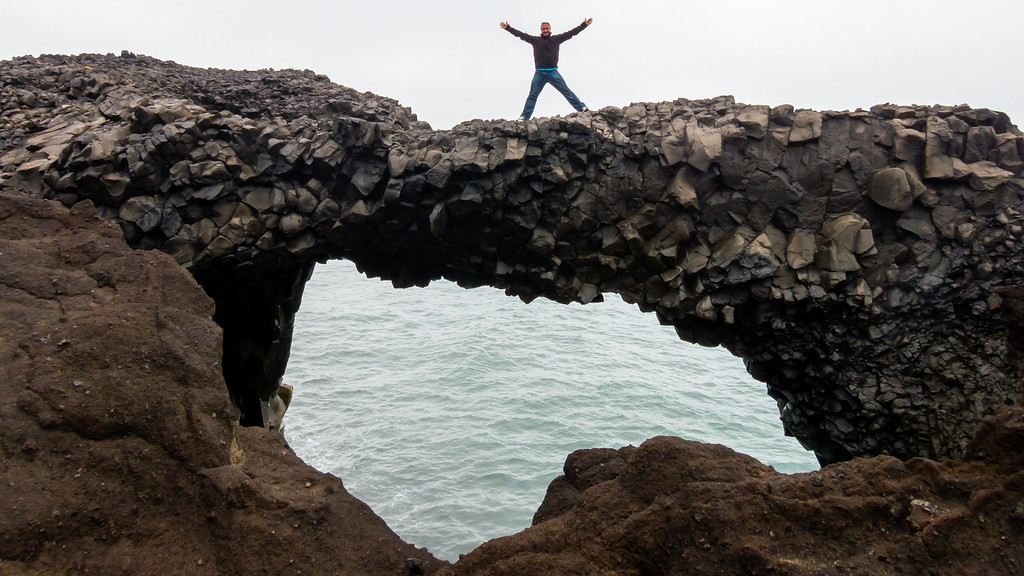 While in the area, we came across a memorial for two British students who were killed by bad weather in 1953 while collecting samples. The memorial was unveiled in 2003 and is constructed of the twisted beams of one of the bridges which was damaged after the Grimsvotn eruption of 1996. It was really a cool site and the destroyed bridge shows the immense power of the floods that can occur after volcanic eruptions. 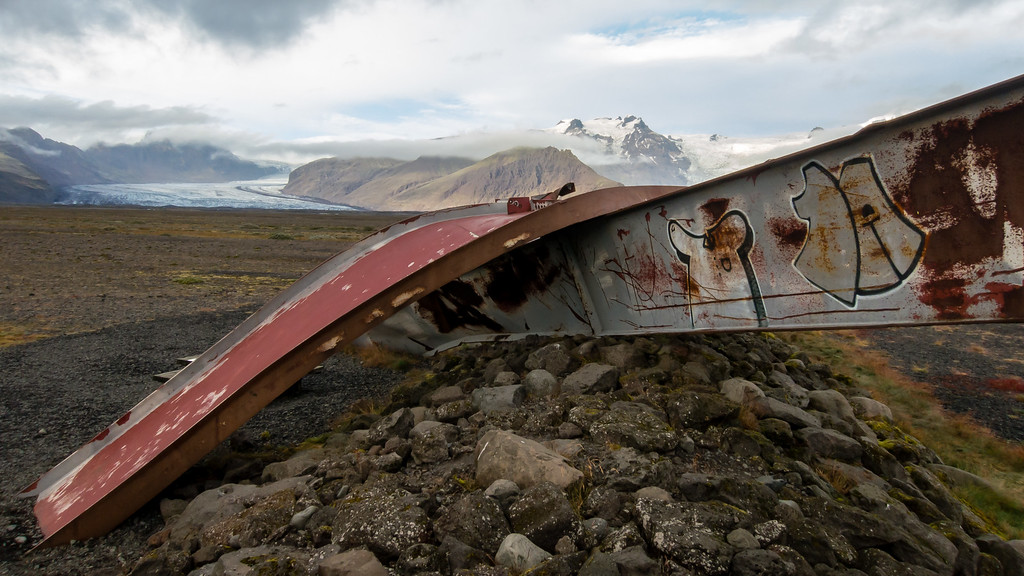 We also passed a number of spectacular glaciers visible from the highway. It is easy to imagine lava meeting with the ice and creating massive floods 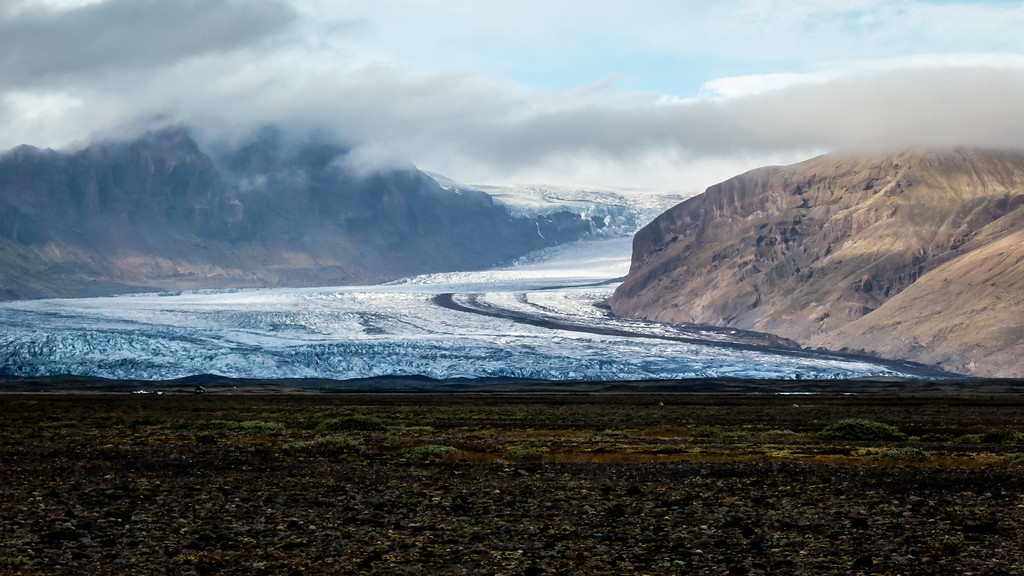 When we finally arrived in Jokulsarlon the sun was already low on the horizon giving the sky an orange haze.

The floating icebergs were the main attraction, but I also loved the gorgeous Glacial River Bridge which spans the Jokulsarlon Lagoon. The bridge’s design reminds me of San Francisco’s Golden Gate Bridge which was a novelty given we were in rural Iceland!

Since our drive to Jokulsarlon had been somewhat rushed, it was wonderful to just sit, relax, and watch the sun set with my new hostel friends.

Enjoying a Sunset with New Friends

Driving Back to Reykjavik

Unfortunately, arriving to the Jokulsarlon Lagoon when the sun was setting meant we had to drive most of the 400km back to Reykjavik in the dark. We saddled up before the sun had completely set which allowed us to stop for a few more stunning photos of Iceland’s varied topography. 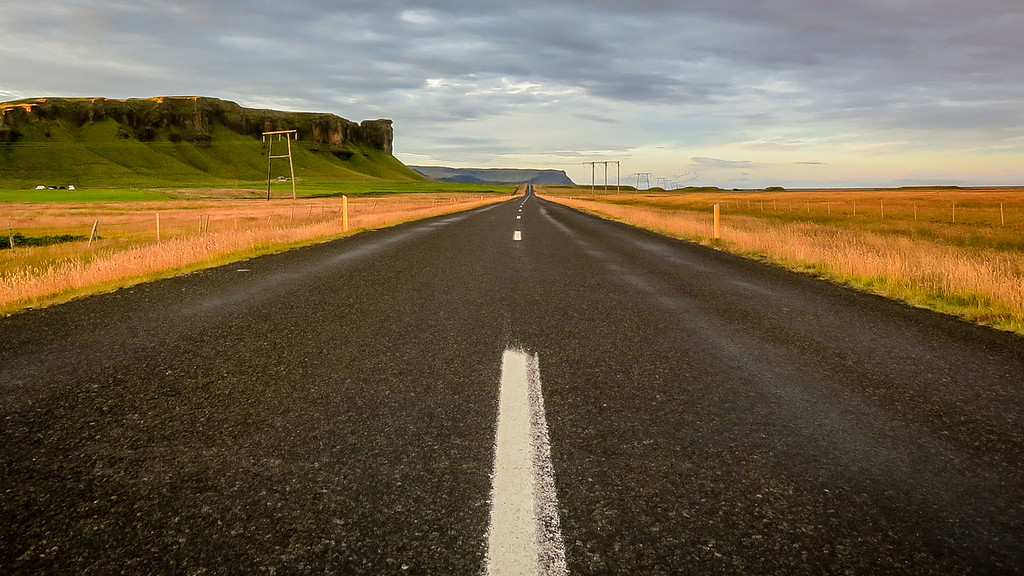 As if a 400km drive back to the hostel was not bad enough, a snowstorm blew in halfway there which made the roads and visibility horrible, especially once the sun set. I have driven through terrible blizzards in Canada before so I could handle it, but I was definitely white-knuckling the steering wheel for what became a long and tiring return drive.

The Calm Before the Storm…

Iceland is an impressive country and unlike anywhere else I have traveled. Hiring a car with a group was definitely the most cost effective way to explore Iceland’s south and if you have more than a few days in Reykjavik I would recommend it, even if you don’t make it as far as the Jokulsarlon Lagoon.

Despite the cost of exploring Iceland, it is definitely a worthwhile travel destination and I certainly hope to return to explore more of the country and hike, camp, and experience Iceland’s natural beauty at much slower pace.