After enjoying a delicious breakfast in Te Anau, which we enjoyed at a picnic table with a beautiful lakeview, we set out for Queenstown. The drive from Te Anau to Queenstown is only 2 hours, but it features great mountain and lake views much of the way making it a spectacular drive. 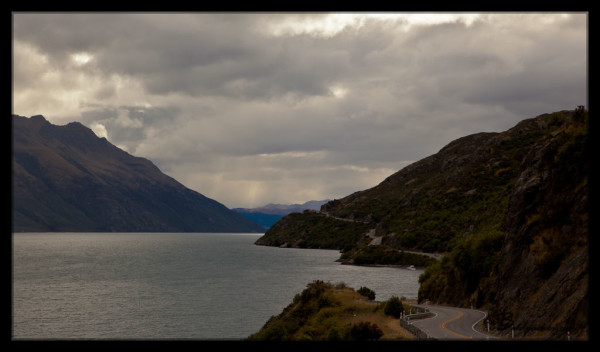 Since we arrived in Queenstown quite early in the day, we drove up to the Remarkables ski hill on its steep gravel road. Unfortunately, the last portion of the road was closed as apparently they are doing a lot of construction at the base of the ski hill, but we were still offered incredible views. We noticed a number of cars and trucks with mountain bikes on road and soon found out that the Queenstown Bike Festival was on. In fact, they were racing down the mountain we were driving up that very day and we decided to park and hike to a vantage point to watch. It was great timing for us to watch the race as they even had helicopters shuttling racers and bikes to the top of the course as well as bringing photographers close to the action during the race. From our vantage point, we also had great views over the Queenstown airport and could see planes coming in for landing. 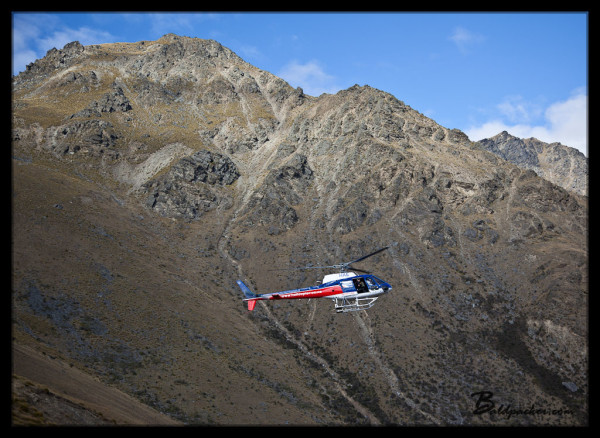 I would love ski in New Zealand one day and regardless of the snow conditions, I can certainly say that the views from the Remarkables Ski area would be incredible. After all of the racers had blown past us we drove back down the gravel road and into Queestown, to our hostel, Sir Cedric’s Southern Laughter Hostel. The Southern Laughter Hostel is one of the best hostels I have ever stayed in. We had booked a double room for around $70 per night and were rewarded with a comfortable room, great kitchen, comfortable and social eating area, and funny quotes and comics plastered all over the walls. As an added bonus, the parking was free and the hostel was close to Queenstown’s lakefront, makign it easy to walk into town.

I had visited Queenstown in October 2010, but had quickly driven through as I had heard it was quite commercial and touristy. This is certainly true, and it is the equivalent to Banff, Canada (a developed mountain town frequented by Asian tourists and often avoided by Canadians), but I still liked the town’s general vibe and was happy we had decided to spend a couple of nights there exploring. Fitting with Queenstown’s commercial reputation, we discovered lots of shopping and touristic restaurants around, but the atmosphere was that of a mountain town and I greatly enjoyed the views and fresh air. One place that looked especially popular was Fergburger, a burger joint featuring a lineup down the street! Too hungry to wait in the apparently 1-2 hour line-up, we returned to our hostel for dinner and to plan our next day. Through New Zealand’s excellent Department of Conservation website (http://www.doc.govt.nz/) we discovered the Ben Lomond track and planned to do the 6-8 hour hike to Ben Lomond Summit. 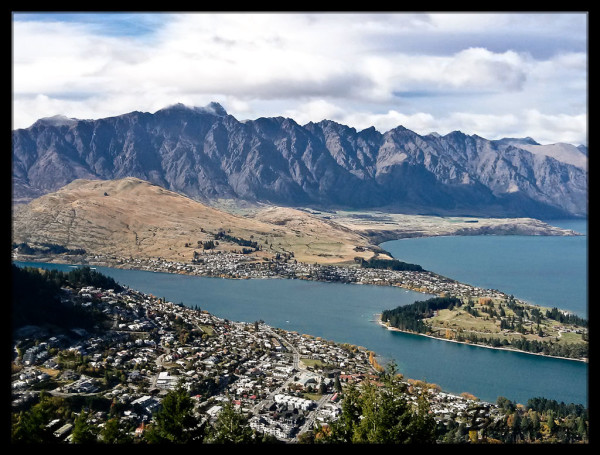 Queenstown and the Remarkables

After an early wake-up and solid breakfast we set out for the Ben Lomond Summit track. There are multiple starting points, but the recommendation appeared to be to start from the One Mile Roundabout alogn the One Mile Creek Walk. We begain the One Mile Creek Walk which follows an old pipeline up to One Mile Dam, one of New Zealand’s first hydroelectric power developments. There are many trails that criss-cross around Queenstown and we were soon between mountain bike trails and residential roads, indicating we must had missed a sign somewhere. Unfortunately, the maps of the area are quite poor and there are a large number of new mountain bike trails and parks that are signed on the ground but not indicated on the maps, making navigation difficult. Eventually we found our way back to the correct trail, which had been poorly signed, where we soon ran into a couple of hikers from Auckland who were heading back towards us. They said that a bunch of deadfall had blocked the pass and made it impassable. Thinking they were experienced Kiwi outdoor enthusiasts, we believed them, and soon started trying to navigate our way on the many unmarked mountain bike trails (not intended for hikers) trying to find a workaround solution. Mountain bike trails are quite steep and straight, making them less than ideal for hiking, and before long I had lost hope that we were going to make it to Ben Lomond Summit that day. Forfeiting our original plan, we made our way towards the gondola where we eventually connected with the Skyline Access Road. From there, it was easy to follow the walking trail to the Gondola’s “tourist zone”. 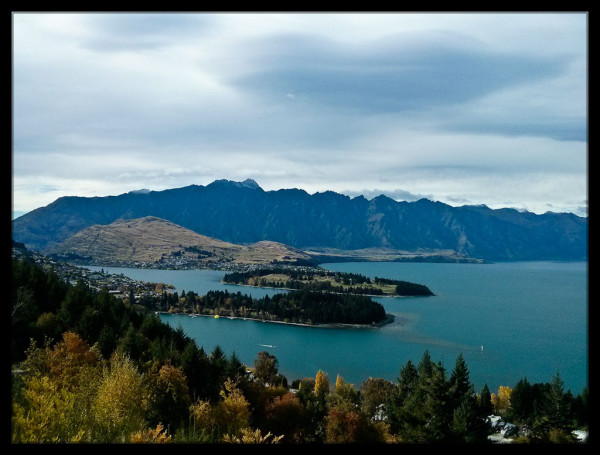 Views from Hike to Queenstown Gondola

Embracing the fact that we had already done many kilometers of hiking and burned up several hours of previous daylight, we explored the Skyline Gondola area which features luge tracks (for wheeled carts), a large restaurant, bungee jump, and ledge swing. Before long we were tired of the crowds and decided to at least find our way up to the Ben Lomond Saddle, a shorter hike along the same trail as we were planning to take to the summit. The trail was quite nice and offered wonderful views once we were above tree line. After an hour or so of hiking from the Skyline Gondola station we could see Ben Lomond Summit, along with the small silouettes of people climbing it. Despite the fact that we had added several hours on to our hike from our misadventures that morning, we fueled up on trail mix and chocolate and headed for the top. The Ben Lomond Summit is at 1748 meters, making it a significant vertical gain from Queenstown which is only around 350 meters. 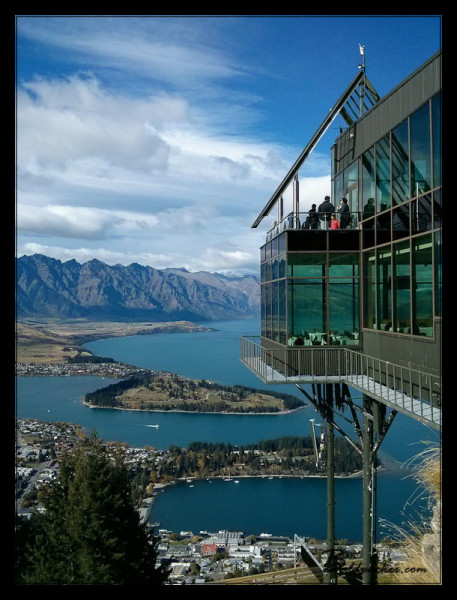 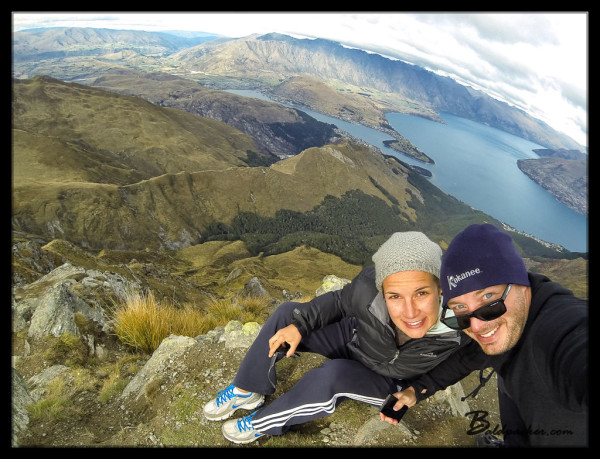 The last part of the hike to Ben Lomond Summit is quite steep and certainly great exercise for the legs, but the views once at the top are very rewarding. If you enjoy hiking, this is a mountain worth tackling for sure!! 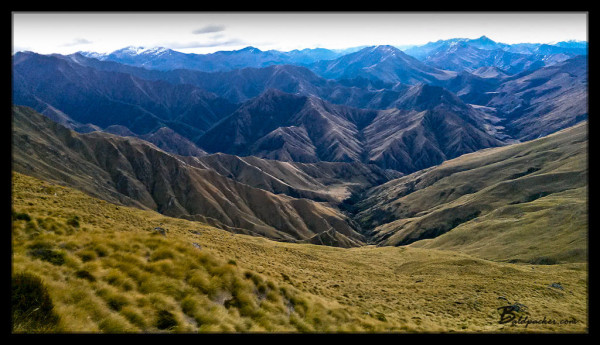 After reaping our scenic reward, Sara and I hiked back down the mountain towards our car. We decided to tempt fate and try the trail that we had been told was impassable and sure enough we made it through. It is difficult to think back and think about all of the time, mileage, and frustration we could have saved had we not listened to the couple from Auckland and checked things out for ourselves, but at least we got to see the gondola and get a feel for the magnitude of Queenstown’s mountain bike trails. In the end, we made it back to our car, conquered Ben Lomond Summit, and thoroughly enjoyed our day in the mountains. As a reward to ourselves for the calories we burned, we went to the Atlas Beer Café for dinner.

The Atlas Beer Café is close to the waterfront on the back of Steamer Warf. They feature a number of wonderful craft beers, tapas, and a select number of entrees featured on a chalkboard each evening. I liked the unpretentious and relaxed style of the Beer Café and thoroughly enjoyed both my beer and the food. The staff was also very friendly and helpful and I would certainly recommend the place for breakfast, lunch, or dinner!

On the walk back to our hostel we once again saw the long line outside Fergburger. Curious, we walked by and saw a larger burger menu and discovered that it opened at 8:30 am. I decided that I needed to try one and the only way I would be able to do so without enduring the long lineups would be to have a breakfast burger.

After a great sleep and despite still feeling full from dinner before, I made my way to Fergburger right around its opening. Even at 9 am, there was a 15 minute wait for a burger, along with a number of Asian tourists taking photos of the kitchen staff cooking burgers. Despite breakfast burger options being available, I chose the Southern Swine, consisting of prime New Zealand beef, American streaky bacon, lettuce, tomato, red onion, avocado, aioli, and tomato relish. Despite its $12.50 price tag, which is steep for a traditional burger, it was absolutely delicious and well worth the money. In fact, it was so good, I regret not ordering the ‘Big Al’, a $17.50 burger with ½ pound of beef, lashings of bacon, a whole lotta cheese, 2 eggs, beetroot, lettuce, tomato, red onion, relish, and a big wad of aiola…..next time….next time….

Full and satisfied with our efforts, we said goodbye to Queenstown and made our way for Wanaka via Arrowtown.