The Catlins are the hilly, forested, and sparsely populated part of Southeastern New Zealand. I had not visited the eastern Southland on my first trip to New Zealand but my brother highly recommended the region, saying it was one of his favourite areas of the South Island, so Sara and I made sure to visit it on my second trip.

We started our drive from Dunedin on the Southern Scenic Route which is a signed 610km highway between Dunedin and Queenstown that winds its way through a number of natural and cultural attractions. In fact, the route was essentially conceived as a way to bring tourists into the Southlands and is best enjoyed at a slow pace, with many stops along the way. In the spirit of this, Sara and I planned to stop for nights in Waikawa and Colac Bay and take our time driving between the destinations along the Southern Scenic Route. 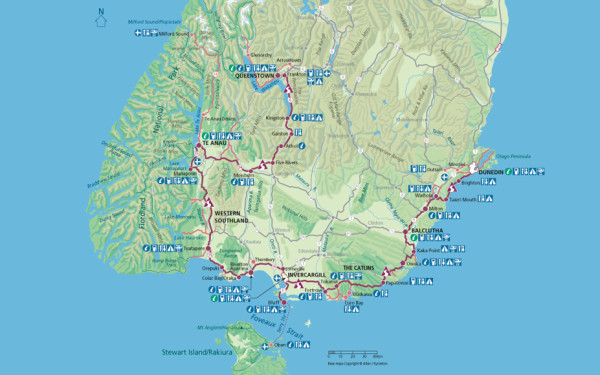 Our first stop was Lake Waihola, a beautiful lake that was smooth as glass. We had a coffee break and enjoyed the views before continuing on to Nugget Point for a walk down to the Tokata lighthouse. The winds were incredibly strong at the point but the views were worth it and we were able to see seals on the rocks below. 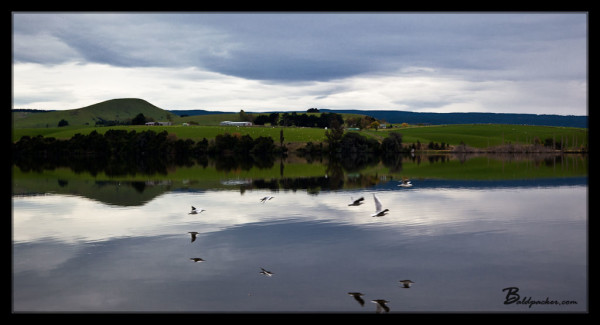 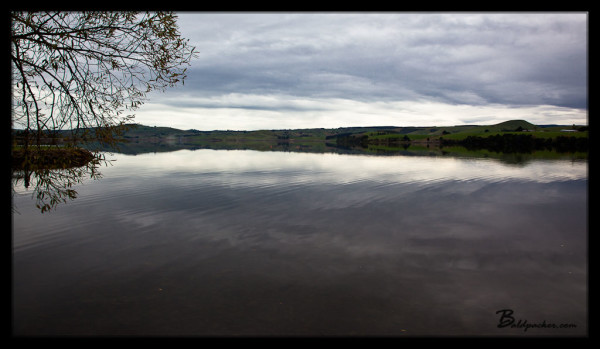 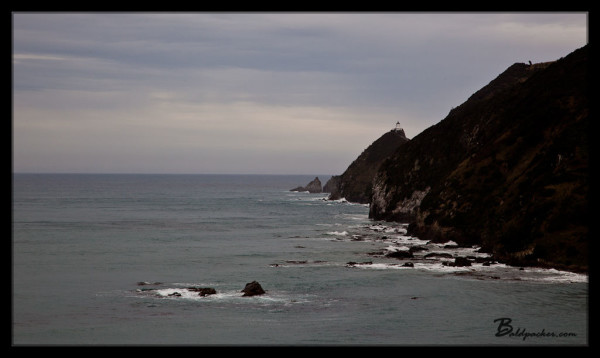 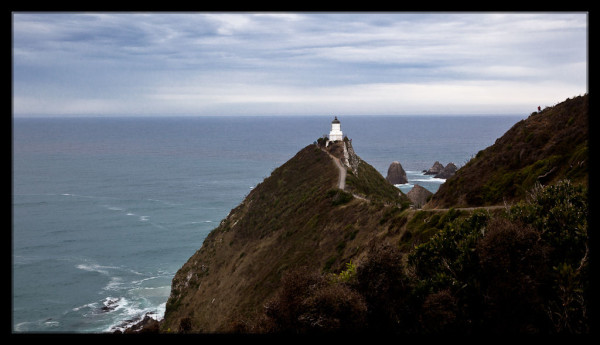 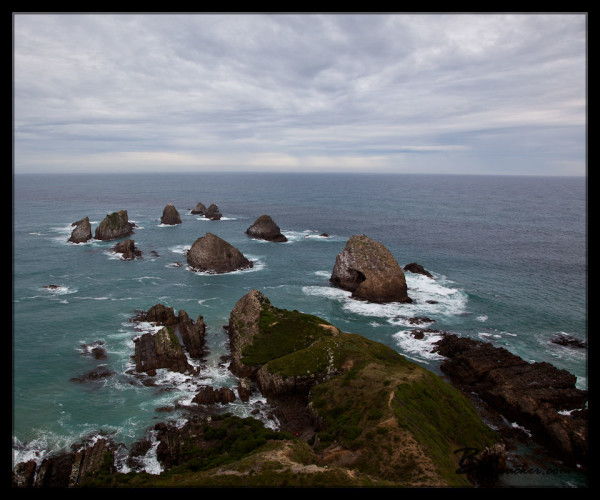 The sun was beginning to set but we continued on to Purakaunui Falls for a quick 20 minute return walk. The Purakaunui Falls are purportedly New Zealand’s most photographed waterfalls and I enjoyed making my own attempts at taking postcard worthy photos. 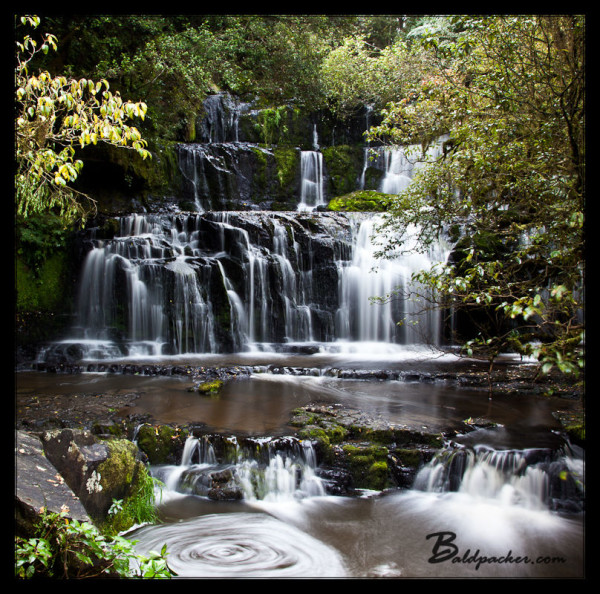 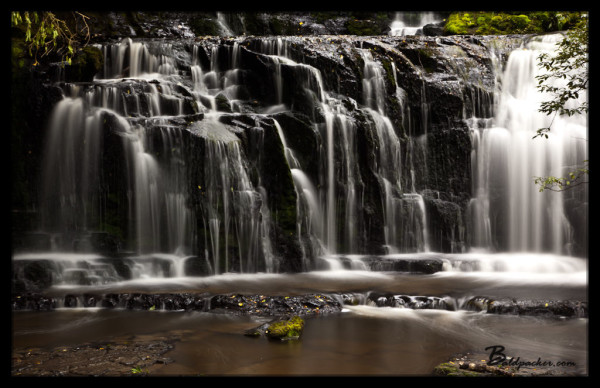 As darkness set in we drove on to the Penguin Paradise Holiday Lodge where we had a reservation for the night. Of course, our drive to Waikawa continued to be scenic and we stopped on the highway at one point for a moment of complete silence and tranquility. The joys of traveling in New Zealand’s shoulder season! 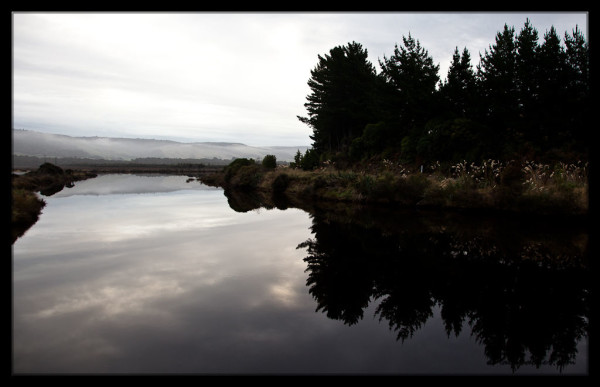 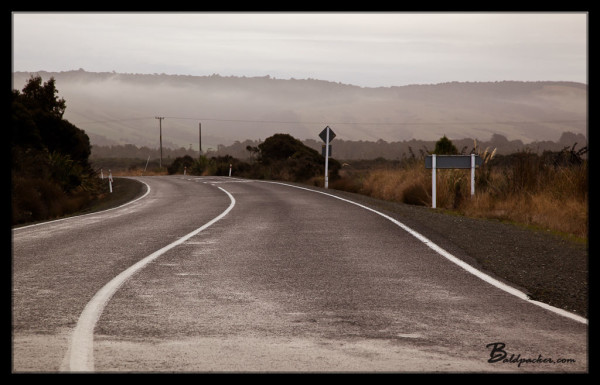 The Penguin Paradise is in the very small town of Waikawa and is essentially a summer cottage open to guests. When we arrived there was a whiteboard indicating which room we were in and a telephone with a number to call to speak to the owners who said they would come by later in the night to collect payment. The lodge was very cozy and quiet and we met several friendly Germans to drink beers by the fireplace with that night. 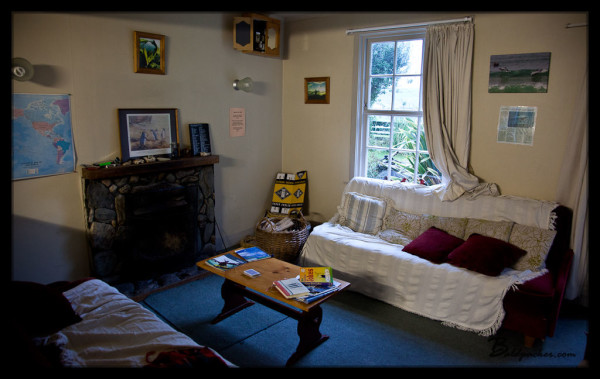 The next morning, we drove to Curio Bay. Normally it is advisable to go to Curio Bay in the afternoons when the penguins arrive on the beach, but the manager of Penguin Paradise Lodge had told us the night before that the penguins were moulting and had not been coming up the beach for viewing. When we arrived, there were freezing cold strong winds and we only took a quick look at the views before running back to the car for warmth and shelter.

From there, we backtracked approximately 30 minutes to the Cathedral Caves. Access to the Cathedral Caves is dependent on the tides and the gates generally open approximately one hour before low tide and close one to two hours after low tide. We arrived forty minutes after low tide and quickly made our way down to the caves where the tides were noticeably coming in. After ten minutes of wandering around and exploring we decided we better make our way out of the caves before being trapped by the tides but still had to climb up on the rock walls in order to escape without getting wet. The Cathedral Caves are 199 meters deep and one of the 30 deepest sea caves in the world. The Cathedral Caves were formed through mechanical erosion, rather than chemical erosion, meaning that the erosion is caused by the waves themselves rather than corrosion of soluble stone. The caves were fun and the beach was beautiful so if your timing is right it is worth the stop and the $5 admission. I would not, however, plan my day around seeing them. 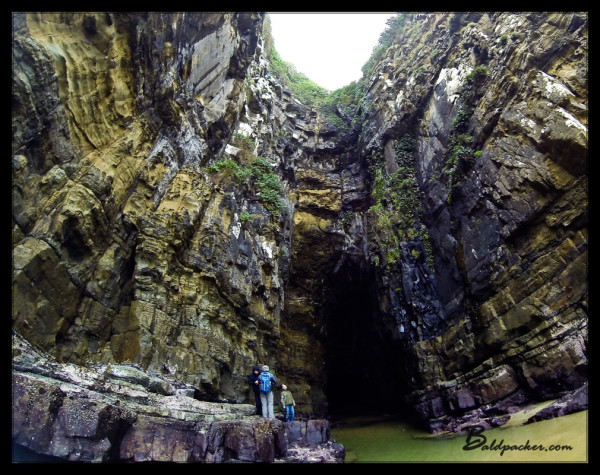 Entrance to the Cathedral Caves 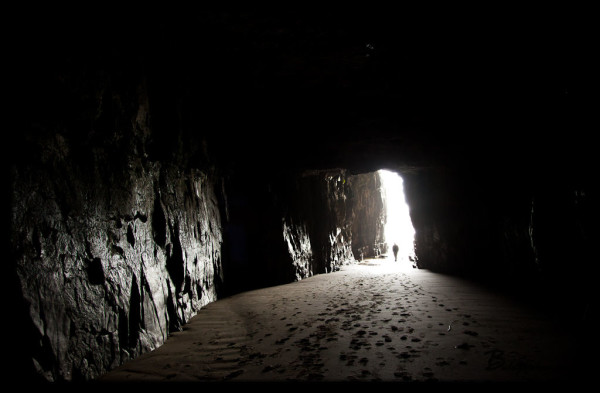 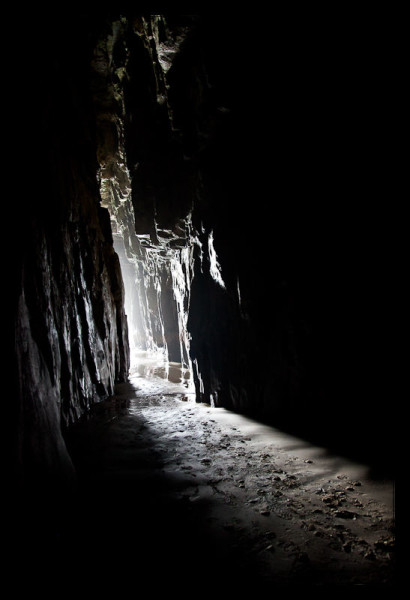 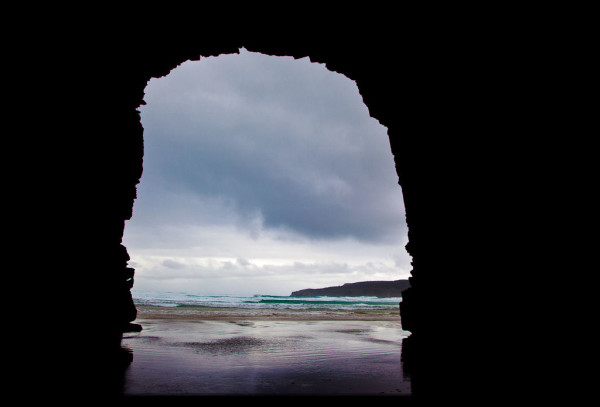 A short distance from the Cathedral Caves is McLean Falls, a beautiful cascading 22 meter waterfall. It was lightly raining when we arrived and this was probably a good thing as the water was flowing very fast and the waterfall was extremely rough and tumultuous. Although the waterfall was certainly the highlight, the walk to McLean Falls is also quite beautiful as the surrounding rain forest hosts a variety of beautiful and unique ferns and trees. Despite the rain, we stayed relatively dry as the lush green forest canopy protected us from the elements.

After accomplishing our morning’s mission, we stopped in at the Whistling Frog Cafe for a coffee. The Whistling Frog Café was beautiful and its location would make it an excellent place to spend the night in order to see the Cathedral Caves and McLean Falls. We loved the Penguin Paradise Holiday Lodge so I do not regret staying there at all, but staying at the Whistling Frog would have saved us an extra hour of driving due to the backtracking we had to do to see those sites. 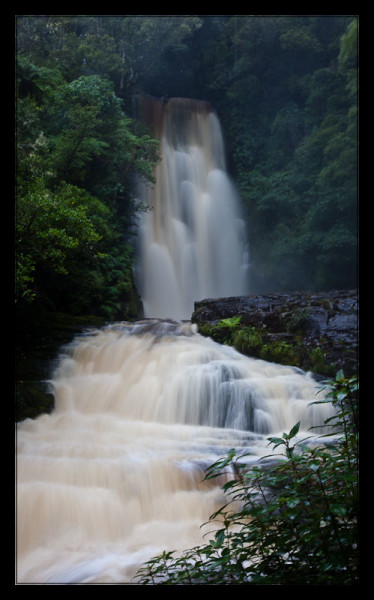 We had a reservation in Colac Bay for our next night, so we decided that it was worth driving back through Waikawa to Slope Point, the most southern point of the South. As the weather had improved greatly since our morning visit, we stopped in Curio Bay again and found out that beyond the penguins, it was also an interesting stop due to the fossilized remnants of a forest on the rocky coast. The Jurassic era tree fossils are probably best viewed at low tide, but we were still able to see a number of large trees that had been beautiful preserved. Despite the improvement in the weather, the light wind was bitterly cold and after a few quick photos we were back in our car and on our way to Slope Point. 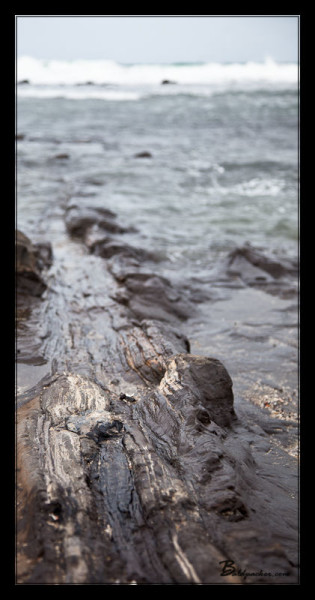 We knew we were in for another windy experience at Slope Point when we saw the trees becoming more and more angled in land. In fact, some of the tree tops have grown with so much wind that they are horizontal now! Slope point offers scenic views out over the ocean and adjacent cliffs. I was very happy when Sara mentioned that it was the most southern point she had ever been and we have a picture as proof! 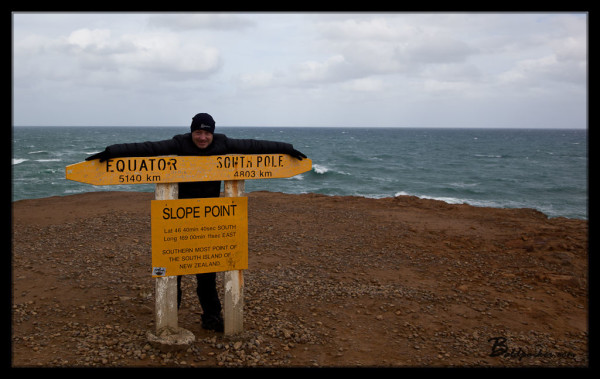 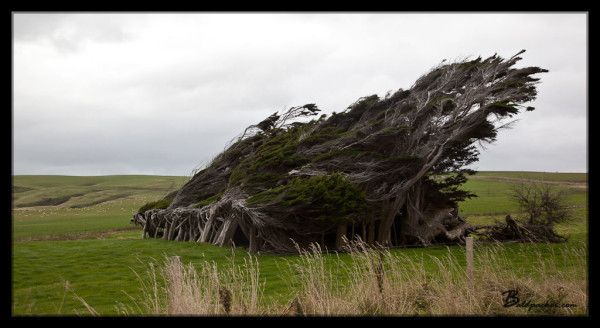 Guess Which Direction the Wind Blows from Slope Point

From there, we continued out through the Catlins, stopping at a roadside tomato stand for the best tomatoes I have ever tasted, followed by a stop in Invercargill for gasoline and groceries. The Colac Bay Tavern and Holiday Park check-in was in the bar and although the holiday park provided the basic amenities we needed for the night, at $62 for a double room there was nothing noteworthy about the place. The kitchen was large and functional so at least we were able to enjoy a nice dinner before bed and the location would ensure that our drive to Milford Sound was not going to be too long the next day. While eating dinner we also met an interesting Kiwi fellow who was spending a week walking across New Zealand with his backpack. He did not seem to have a reason or goal for this endeavor (although I suspect he was financially constrained), but New Zealand’s scenery is so enjoyable by car that I am sure that walking the highways would be just as nice. I was tired and went to bed early to rest for the long drive the next day to Te Anau and Milford Sound, but Sara stayed up and made tortillas (Spanish egg and potato omelets) for a lunch on the go the next day, making good use of the free range eggs and fresh home grown potatoes we  purchased earlier that day. 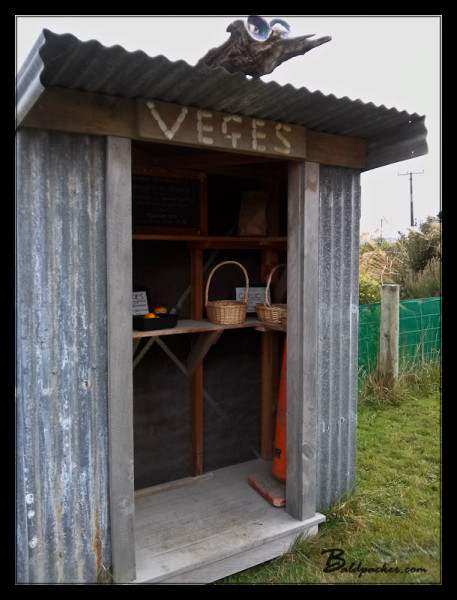 The Southern Scenic Route and Catlins lived up to my brother’s recommendation and it is certainly a unique and beautiful part of New Zealand’s Southern Island.