Swimming with Jellyfish in Palau 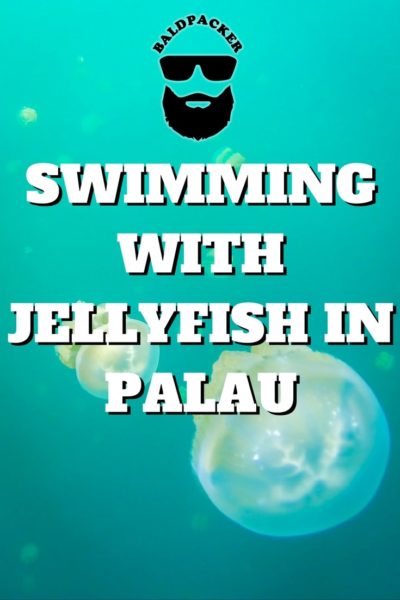 The Paradise of Palau

The Republic of Palau is a small island country in the western Pacific Ocean. While geographically part of Micronesia, the islands gained full sovereignty in 1994. Only 21,000 people live on Palau and they are spread across some 250 islands. The most populous island is Koror, with around 10,000 people. 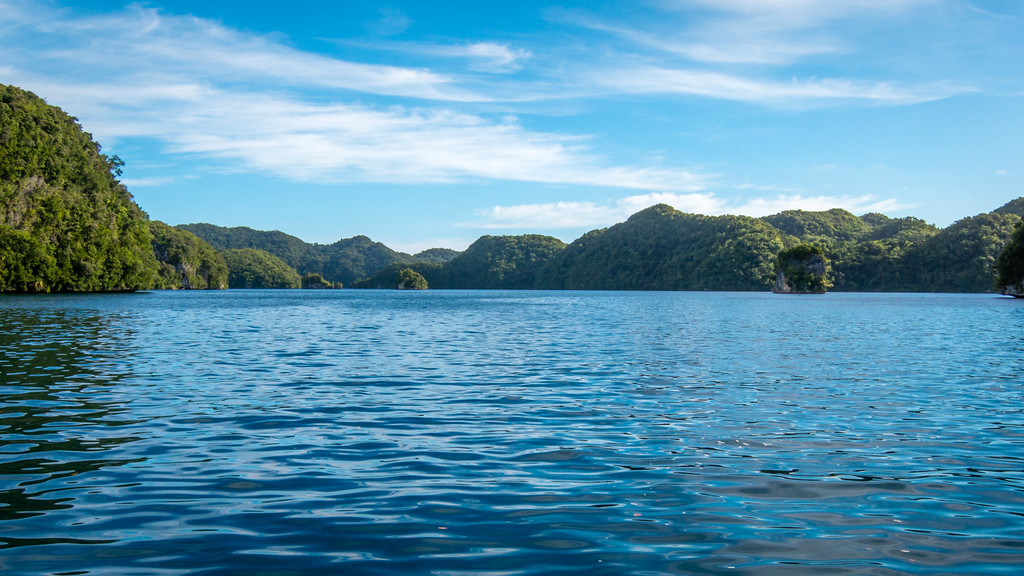 Part of what makes Palau a paradise is its incredible weather. The temperature averages around 27°C year-round, with average lows of ~24°C (75°F) and average highs of ~31°C (88°F). It rains more June through August but you should get lots of sunshine regardless of the month you visit.

Palau is not an easy place to get to and direct flights are limited. The only direct flights I’m aware of are from Incheon, South Korea; Taipei, Taiwan; Tokyo, Japan; Manila, Philippines; Yap, Micronesia; and Guam, USA. Palau’s airport is on Babeldaob which is a separate island from Koror, a 20-minute drive away.

The good news is that almost anyone visiting Palau can obtain a free 30-day tourist visa on arrival. The bad news is there’s a US$20 Departure Tax and US$30 Environmental Protection Fee on departure.

I visited Palau while island-hopping across the Pacific. My plan was to fly from Manila to Palau, Yap, Guam, and Saipan before reaching Hawaii. Unfortunately, due to the flight schedules, I could only spend one day in Palau before continuing to Yap. Before booking, I’d read that backpackers were disappointed in the cost of visiting Palau and the overall consensus seemed Palau was a poor value destination so I thought one day would be enough. I was wrong.

While I can understand the complaint that Palau is expensive, I wish I had spent at least three days visiting Palau so I could go scuba diving. Kayaking and taking a helicopter flight above the Rock Islands also looked amazing. If I return to Palau, I will aim to spend at least a week and, along with dive several times, try to camp or do a homestay on a less developed island. 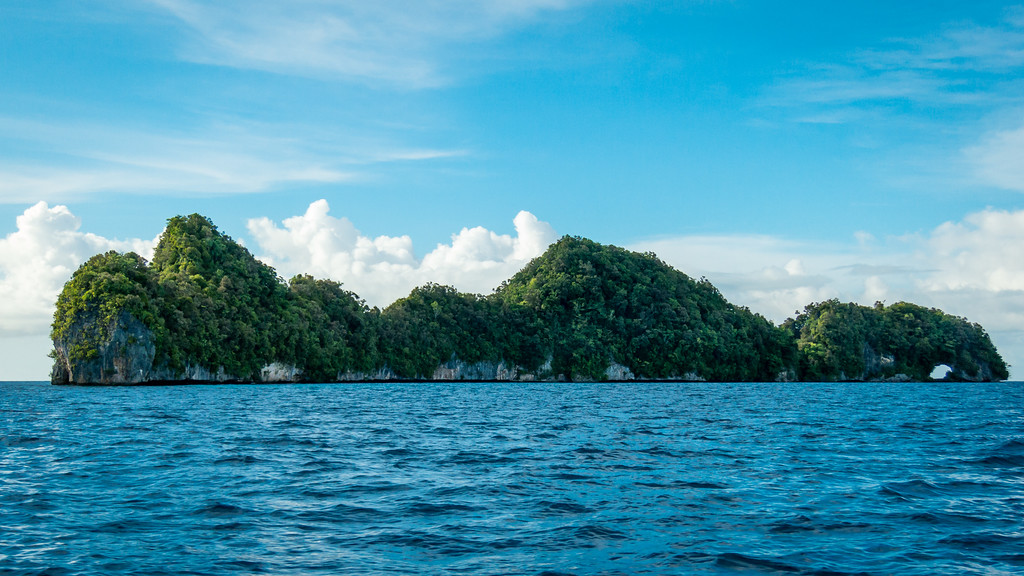 Koror is the most developed island and the place most tourists base themselves.

In December 2014, when I visited, there were no hostels and the cheapest room available online was the DW Motel. As of 2016, the DW Motel continues to receive very good reviews and remains the cheapest private room I can find. However, I’ve discovered there is now also a hostel called Ms Pinetrees Hostel that offers cheaper dormitories. The hostel has received great reviews so that is where I’ll stay if I return to Palau.

Sam’s Tours offered me a package tour including hotel, airport transfer, and snorkel tour so I stayed at the Comfort Suites, their partner hotel. The room was big and comfortable but In only spent a few hours in the room so it didn’t even really matter! The hotel portion of my package cost $135, including late check-out.

Getting around Palau can be difficult. There is no public transportation system so you’re limited to renting a car, hiring a taxi, or hitchhiking.

If you plan to explore the island of Palau, renting a car is the best way to do so. One confusing thing is that people drive on the right and have right-hand drive cars. I believe this is because the road rules are from the U.S. but the cars are from Japan.  Also be aware that the speed limit is 40km/hr and many of the roads are unpaved, bumpy, or both.

Taxis are not metered and therefore rates are negotiable. If you need a lift from the airport, it may be worth asking your hotel in advance how much a taxi should cost. If your flight arrives in the middle of the night, as many do, it may be worth requesting the hotel to provide a transfer just to avoid any hassles.

Hitchhiking is apparently very easy and safe, though I didn’t need to hitch any rides during my short stay.

The only transportation I needed was from the airport to my hotel, on to Sam’s for my tour, and back to the hotel and airport after the tour. As part of my package, Sam’s arranged all of this for me for only $20. I arrived at Koror’s airport at 02:15 and, after clearing immigration and customs, was very happy to see a man holding a sign with my name on it. My driver was a very friendly guy who was born in Palau but grew up on Guam. As we drove to Koror the street lights went out so I couldn’t see much. According to the driver, electrical outages are a common occurrence on Palau so be prepared for island life!

I arrived at Koror’s airport at 02:15 and, after clearing immigration and customs, was very happy to see my transfer driver waiting. As we drove to Koror the street lights went out which meant I couldn’t see the the Palau-Japan Friendship bridge. The bridge connects Babeldaod island (where the capital and airport are) to Koror, where most people live. The old bridge connecting the islands collapsed in 1996 so the new

Since I only had one day in Palau, I wanted to make the most of my time and see as much as I could. Before arriving, I e-mailed both Antelope Palau and Sam’s Tours to see what they would recommend I do during my short stay.

There were a lot of tour options that appealed to me, including several snorkeling tours, WWII tours, and kayaking trips. Scuba diving would have been my main priority if my stop-over wasn’t so short but, since I prefer to leave at least 24 hours between diving and flying, I opted for snorkeling. 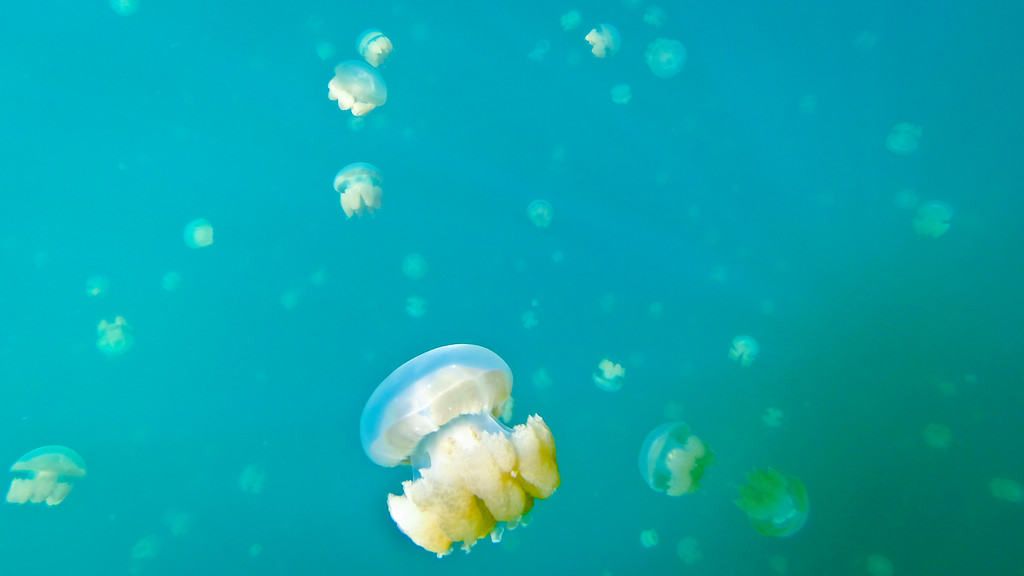 One problem with tours on Palau is they usually need a minimum number of people to run. Sam’s recommended the Rock Island and Jellyfish Lake tour to me since it was a confirmed departure. The total cost of the tour, as part of my package, was $115 plus $100 for the required Rock Island / Jellyfish Lake Permit ($215 total).

After I arrived at my hotel, I only had time for 3 hours of sleep before being picked up for my tour. Thankfully, Sam’s had free coffee for me to gulp down while I waited for my group to arrive and  I had a chance to meet some of the staff and check out their scuba diving facilities. It seemed like a very professional outfit and I was surprised to meet a staff member who was from a town less than an hour from where I grew up.

After an orientation from our tour guide, Fonzie, we loaded up the boat and set out for the day. My group consisted of a family of five from Taiwan, an older couple from Seattle, and a younger couple, Brian and Jony, from Guam. 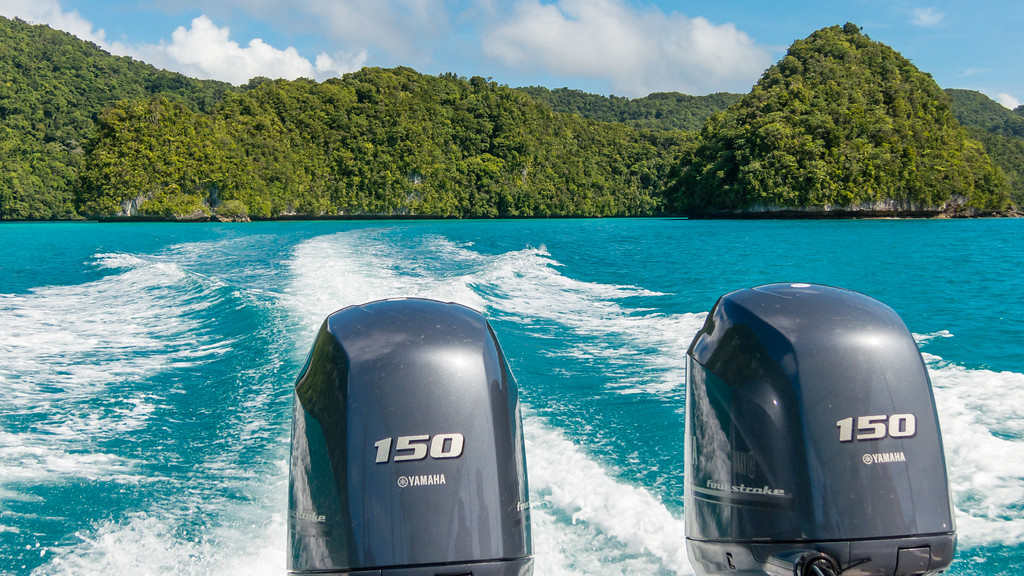 We first visited the Milky Way, a cloudy lagoon filled with fine white silt. Lots of people rub the white mud over their bodies as it is supposedly good for the skin and it was funny to see another boat filled with Asian tourists whitening their bodies. 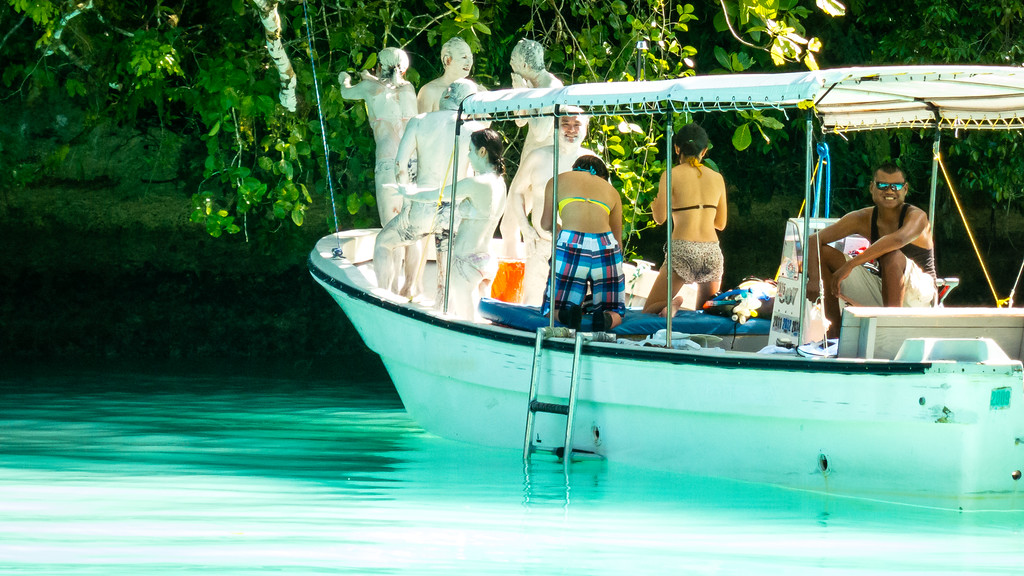 From the Milky Way we continued on to Rainbow Reef (AKA Fantasy Reef) where we had our first chance to snorkel. I was immediately blown away by the clarity of the water and condition of the reefs and regretted not being able to scuba dive in Palau. Sometimes there were so many fish it felt as though I was swimming in an aquarium. Although I did not see any large or unique marine life, everything about the snorkel was enjoyable and I found the corals abundent and well-preserved. 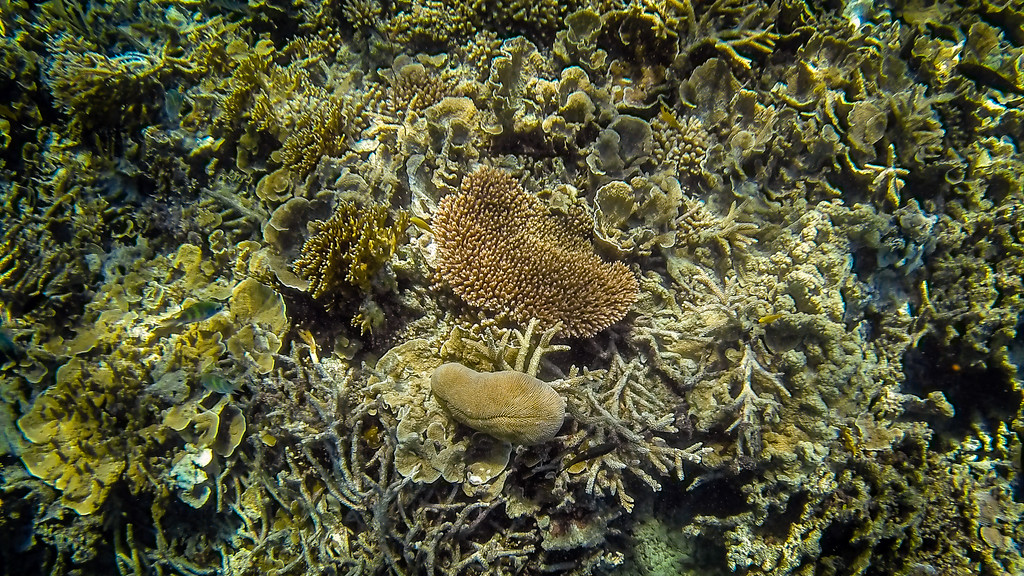 The next stop, Giant Clam City, was unique to me. A dozen giant clams, some of which were 40-50 years old and weighed in excess of 300 pounds, were only a few meters deep. I have never seen such large clams before and I really enjoyed the stop. Fonzie told us that some schools in Palau run an educational program where students “plant” clams and can return to see the clams continue to grow over their adult lives. 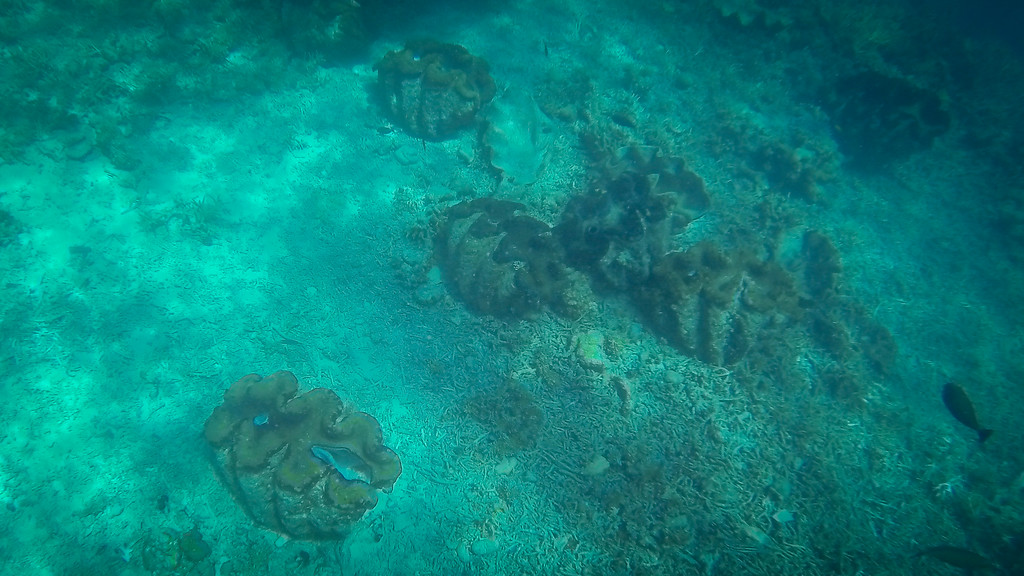 Since I hadn’t eaten breakfast after my flight and three hour nap I was starving by lunch. Luckly, we were fed delicious bento boxes which we ate while enjoying our beautiful surroundings.

After lunch, we went to Jellyfish Lake – the highlight of my trip to Palau. Jellyfish Lake is one of five lakes on Palau that contain freshwater jellyfish, but it is the only lake open to the public.

If you’re wondering how I swam through a lake filled with jellyfish it’s because they don’t sting! Apparently, since the jellyfish have not had any predators for a long time, they have evolved to lose their stingers.

Me Snorkeling with Jellyfish

We had to wear lifejackets while snorkeling, but thankfully, the jellyfish look for the sunshine and there were loads of jellyfish hanging out near the surface. I could not believe how many jellyfish there were and swimming with them was a magical experience. 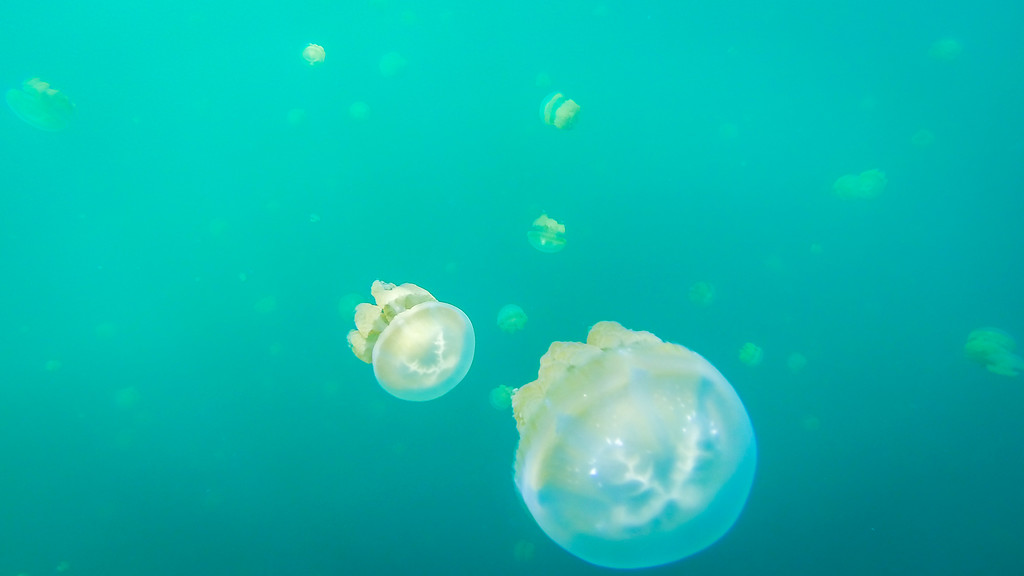 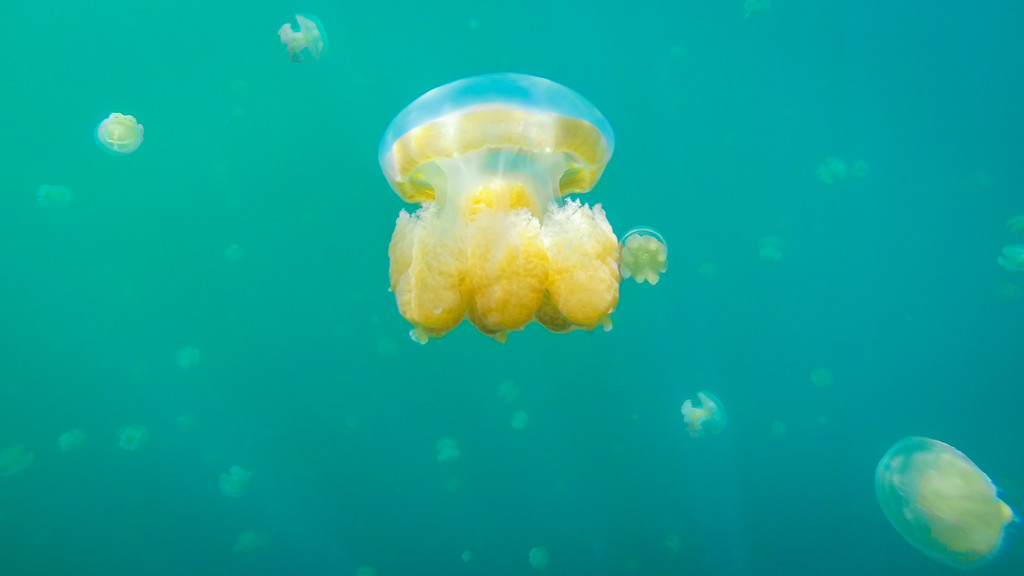 Before heading back to Koror we stopped twice more to snorkel; once at Fish Bowl (also known as Cemetery Reef), and a natural rock arch. During the tour, we usually had snorkel spots to ourselves, but the fishbowl was packed with tourists and therefore less enjoyable. 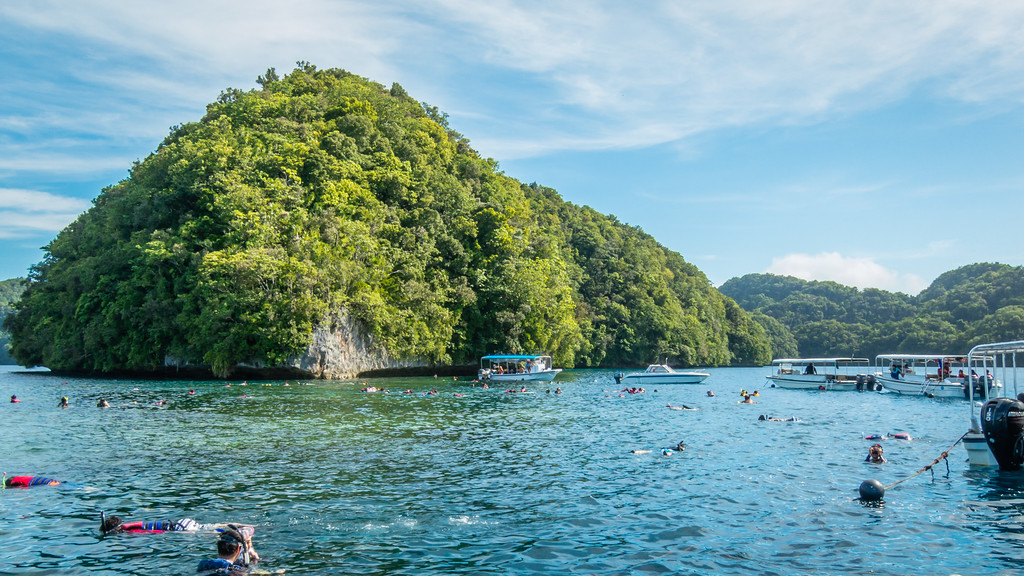 The boat ride back to Sam’s Tours provided spectacular scenery, including a Natural Arch Palauans apparently sometimes use for weddings.

I’m All Smiles After an Epic Day Snorkeling

After a hot day in the sun, a cold beer at Sam’s was the perfect end to our tour. Luckily, Sam’s had several local Red Rooster beers on tap including their light, amber, wheat, and stout varieties. I enjoyed all of the beer styles and the great conversation with Brian and Jony. We snacked on a delicious Tuna sashimi and Brian introduced me to mixing lemon juice with my usual wasabi/soy dip. Brian and Jony even invited me to spend Christmas with them in Guam.

After a beautiful sunset, I went to my hotel to rest for my onward flight to Yap.

Next time I’m in Palau, it will be for a week or more so I can dive, hike, and kayak. By spreading the taxes and fees over a longer stay, sleeping at the Ms Pinetrees Hostel, and hitchhiking or sharing car rental costs with other backpackers, I expect I could bring my average daily cost down to US $150/day or less. While still expensive, Palau is definitely worth it!

← The Essential Guide to Travel in Sana’a, Yemen
Driving to the Canadian Arctic • Calgary to Inuvik on the Dempster Highway →

2 Comments on “Swimming with Jellyfish in Palau”