The Essential Guide to Travel in Sana’a, Yemen 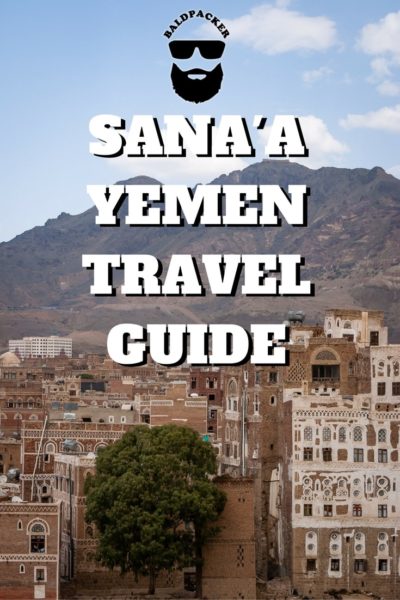 Most travelers to Yemen will fly into Sana’a even if their final destination is Aden or Socotra. Sana’a is Yemen’s largest city, with a population of approximately 2 million inhabitants (Hodeidah, Taiz, and Aden only have around 500-600k inhabitants each). 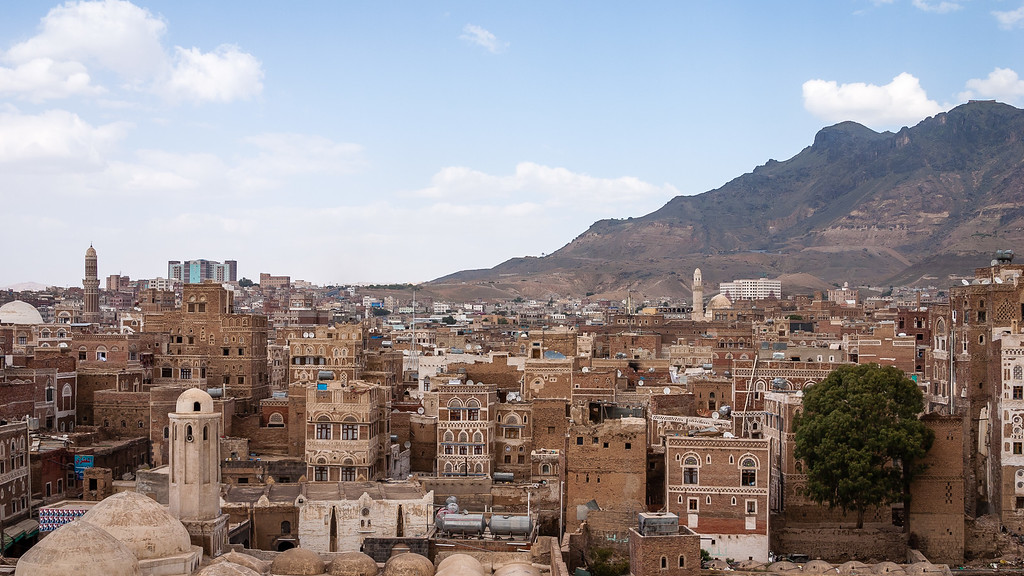 Views Over the Old City of Sana’a

Sana’a became the capital of Yemen in 1994 after a civil war united North Yemen (formerly the Yemen Arab Republic) and South Yemen (formerly the People’s Democratic Republic of Yemen) into the Republic of Yemen. As the capital, Sana’a features better infrastructure than much of Yemen, and features government buildings including the presidential palace, parliament, supreme court, government ministries, and Al Saleh Mosque.

Sana’a is surrounded by mountains and, at 2300 meters, is the 7th highest capital city in the world. This altitude provides a wonderful climate, with the average daily high temperature ranging from 20-28°C (69-83°F) through the year. Sana’a has also been inhabited for more that 2,500 years, giving it the distinction of also being one of the oldest continuously inhabited cities in the world.

My experience in Sana’a is based on nearly a decade of living and working in Yemen, including several years in which I was based in Sana’a.

It would be negligent of me to discuss traveling to Yemen without addressing the risks and dangers of visiting the country.

When I first arrived in Sana’a in August 2006, it was much easier and safer to travel around Sana’a, though my company still required me to abide by strict security procedures. Although kidnappings were always a risk, the frequency and severity of kidnappings has gotten much worse over the last decade and I would advise all travelers to be escorted around town by a local guide and/or armed guard. 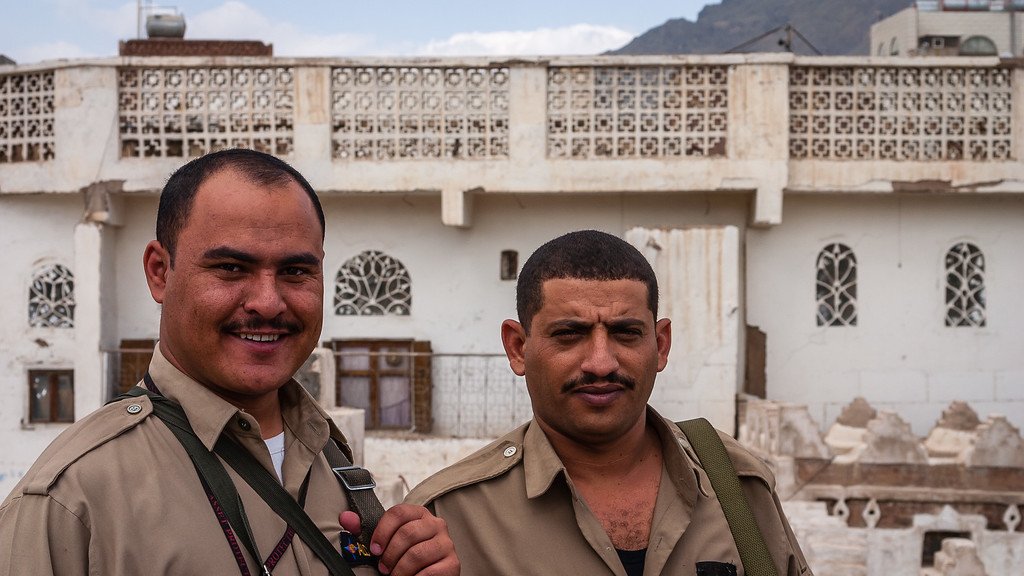 The majority of Yemenis are lovely people who will graciously welcome you to Sana’a and possibly even their homes. Unfortunately, kidnapping became a way for tribes with grievances against the government to gain a negotiating chip and thus abductions have become more commonplace in recent years.

Historically, kidnappers treated their foreign captives very well and some even viewed being kidnapped as a positive experience. I once read an opinion piece in the Yemen Times (an English language Yemeni newspaper) saying foreigners should want to be kidnapped since they’d experience local Yemeni food and traditions free of charge before being released and sent home as a “celebrity” that could write books about their experience. While there may have been some truth to that in years past, captives are now commonly killed or sold to Al-Qaeda and thus being kidnapped should be avoided at all costs!

There have also been several terrorist attacks targeting foreigners in recent years and thus it is important to try and blend in and remain as inconspicuous as possible. Wearing traditional clothing, traveling with a local, and avoiding typical expat hangouts is advisable. 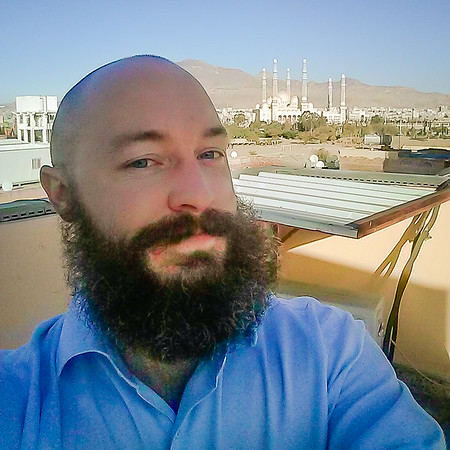 Growing a Beard Helped Me Blend In…

In 2008, my own apartment compound, which was filled with foreigners, was hit by three mortar shells believed to be launched by Al-Qaeda. It was a scary experience that has made be more cautious in my travels.

August 2016 Update: As of February 2015, the UK and US closed their Sana’a Embassies and Saudi Arabia began fighting a war against the Houthis, who seized control of Sana’a in September 2014. No travelers should consider visiting Yemen until the situation stabilizes and visas become available through regular channels again.

Things to See in Sana’a

The most famous tourist area in Sana’a is the old city district (al-Qadeemah) or what is more commonly called Bab al-Yemen, meaning the gate of Yemen. The old city is surrounded by ancient clay walls which stand 9–14 metres (30–46 ft) high and thus Bab al-Yemen refers to the entrance and exit gate that historically opened each morning and closed each evening to let citizens enter and exit.

The old city contains more than 100 mosques including the Great Mosque of Sana’a which is more than 1400 years old, 12 hammams, and 6,500 houses. 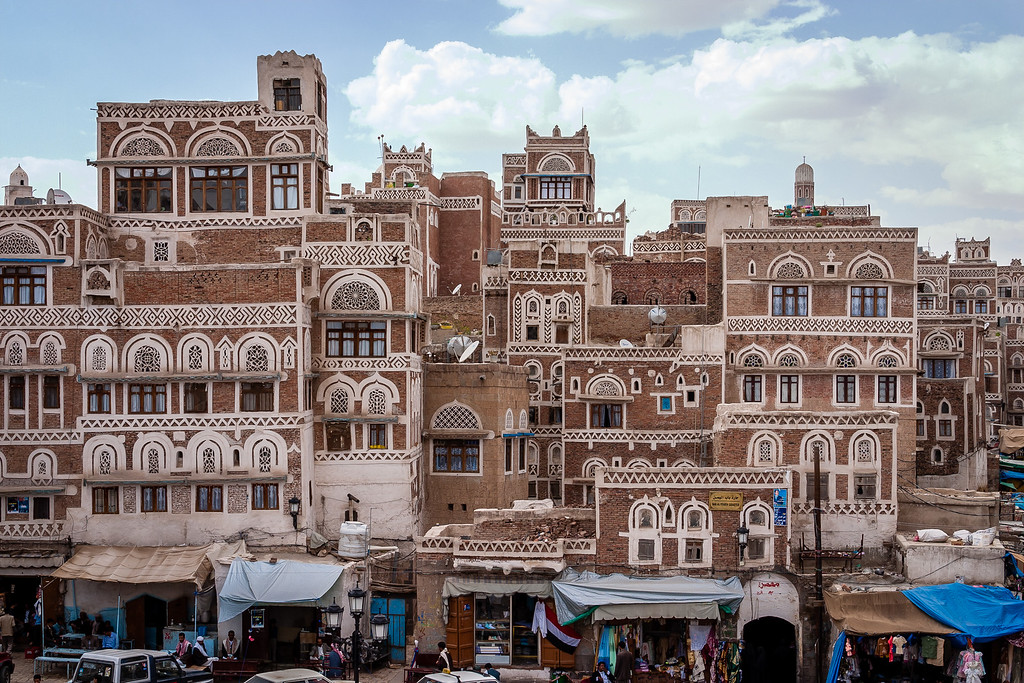 Houses and Shops in Bab Al-Yemen

Many of the houses resemble ancient skyscrapers, reaching several stories high and topped with flat roofs. They are decorated with elaborate friezes and intricately carved frames and stained-glass windows.

Upon entering Bab al-Yemen, an immediate right will take you to a wonderful art gallery as well as stairs up to the walls surrounding the old city. The walls offer great views over old Sana’a and are certainly worth exploring.

Twenty meters straight ahead of the entrance gate there is often a camel walking around a darkened room in circles, turning a traditional mill that grinds sesame seeds into oil. The floor of the mill shows just how long camels have been turning the mill as a deep trail is worn into the stone surface.

If you walk deeper into the old city you will discover the souks – open air markets. The Bab al-Yemen souks are commonly called Souk Al-Milh, meaning “Salt Market”, but there are shops selling all sorts of goods including cooking wares, furniture, tools, nuts, spices, wooden doors, pashmenas, and jewelry. 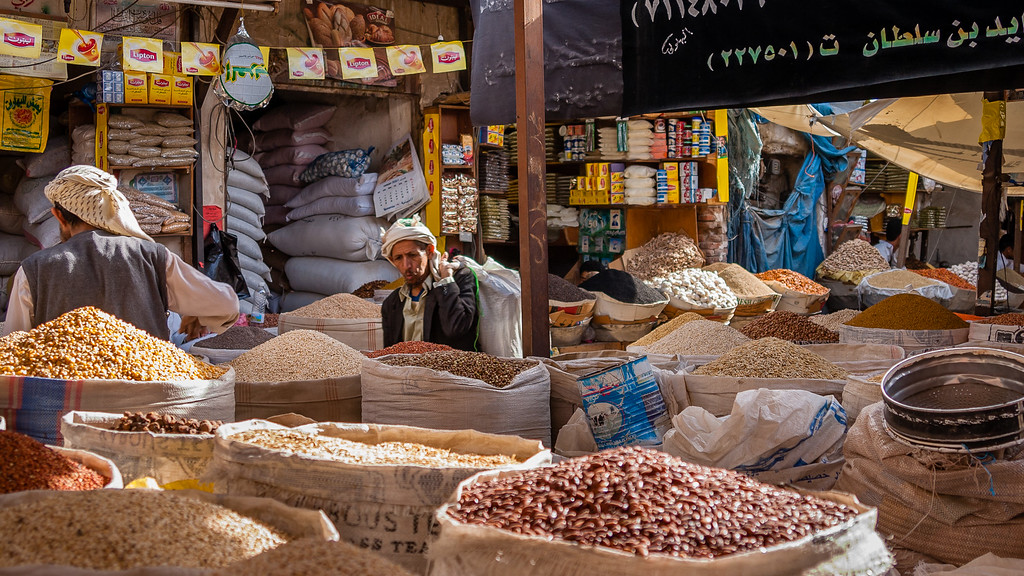 Souk Al-Milh in the Old City of Sana’a

I would highly encourage visitors to peruse the jewelry stores as they often sell unique goods beyond jewelry including rifles and pistols from WWII, silver prayer boxes (for carrying scrolls), camel bone boxes, and jambiyas. Jambiya is the Arabic term for dagger, but it is usually used to describe the short double-edged blades that Yemeni men wear in the front of a belt as part of their traditional dress.

The cost of a jambiya is greatly determined by the design of its handle and sheath. They can be fashioned from wood, steel, silver, wood, and decorated with semi-precious and even precious gem stones. Sadly, rhino horn is also commonly used by the elite as a status symbol and I have been told that Yemen is the world’s top importer of illegal rhino ivory for this purpose. I have purchased cheap leather, wood, and steel jambiyas as gifts as well as a beautifully hand-detailed silver jambiya that I’ve mounted in a shadow box for display on my wall.

The Al Saleh mosque was inaugurated in 2008 by then Yemeni President Al Abdullah Saleh; take a guess at how the mosque was named…

I was able to watch the mosque construction from my office and was amazed by how beautiful the mosque was when it was finally completed.

The construction of the mosque was somewhat controversial as it cost $60 million to build – a lot of money for an impoverished nation. Furthermore, many workers were killed in construction accidents including when the minarets unexpectedly collapsed. The mosque is one of the most beautiful tourist sites in Sana’a though and I hope that it will benefit the city and country economically in the long run. 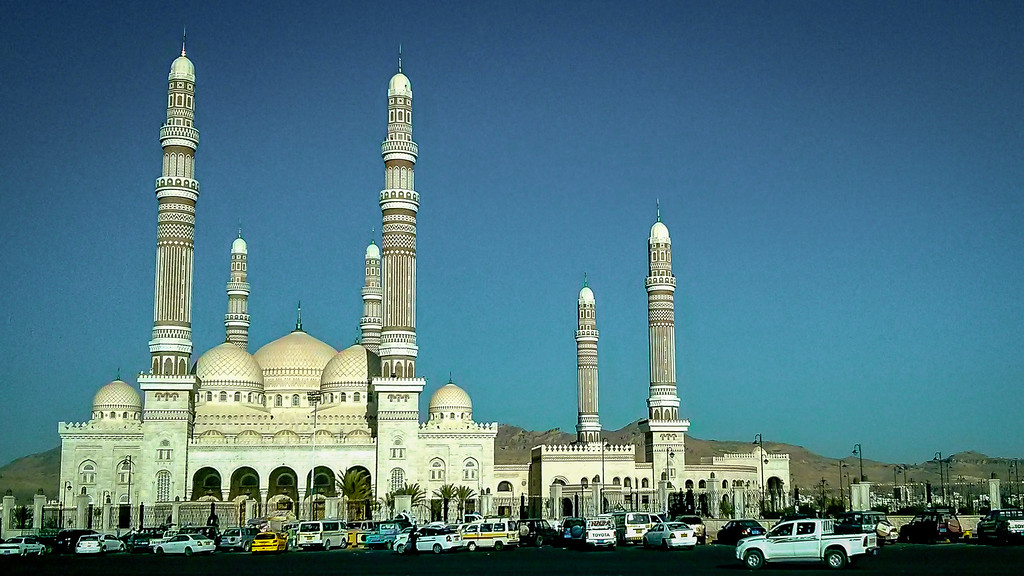 The completed mosque is one of the largest and most impressive I’ve seen in the world. The main hall is nearly 14k square meters and has capacity for 44,000 worshipers. There are six minarets (each reaching a height of 100 meters) and five domes with the largest being nearly 40 meters high and over 27 meters wide.

Visitors of all religions can visit the mosque and police and bomb-sniffing dogs are used to inspect people entering the complex so it is arguably safer than other mosques in Sana’a.

The Movenpick Hotel is the nicest hotel in Sana’a and also a relatively safe place to stay or visit thanks to its large compound and security team. The hotel is located on a hill and the back courtyard and garden offer stunning views over Sana’a day and night.

While I would not necessarily recommend staying or eating at the Movenpick due to the high prices, the hotel is a great place to go for a drink or smoke a hookah and enjoy the views. It is a also a common hangout among wealthy Yemenis, who are more likely to speak English, so you may gain some local insights.

Historically, the Movenpick was one of the few places in Sana’a that served alcohol and once upon a time there was even a nightclub in the basement. After the Houthis gained control of Sana’a alcohol was forbidden so the bars are all closed as of 2016 but this may change in the future. 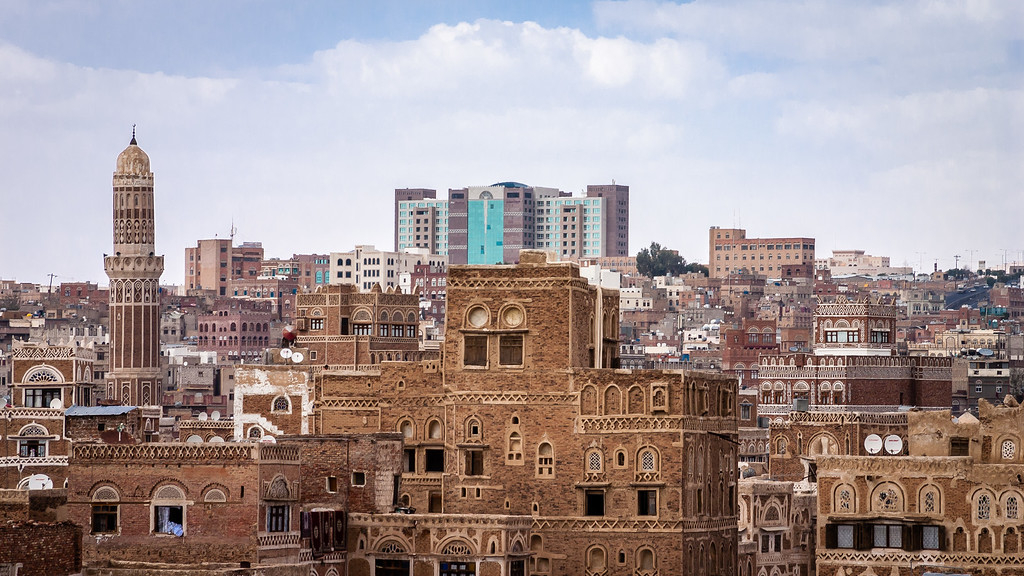 Unexpectedly, there is an amusement park called “Fun City” very close to the Al Saleh Mosque. Although I would not trust the safety of the amusement park rides, there is a bowling alley for cheap 10-pin bowling and an ice rink was opened in 2013, offering many Yemenis their first opporunity to try skating. While Fun City is not a worthwhile tourist attraction in itself, it would be a great place to take a local family for a day out.

One relatively unique thing to Yemen is the use of khat (also spelled qat). Khat is a shrub that releases amphetamine-like stimulants when chewed. Although khat is also used in other countries on the horn of Africa, such as Djibouti, Ethiopia, and Somalia, the usage of khat within Yemen is very high. In fact, many believe the use of khat has largely impeded the development of the country because:

I’ve chewed khat on several occasions as part of work meetings, weddings, and other social events. Khat leaves taste like typical shrub leaves and people often drink sweet beverages, like ginger tea, 7-up, or cream soda, to reduce the bitterness.

I’d compare khat to drinking a red bull or several cups of coffee. I enjoyed khat chews for the social experience but would not consider khat as an enjoyable drug to use. Khat often made me sleepless, gave me a lack of appetite, and I’d wake up with the equivalent of a hangover the next morning. If given the choice, I’d prefer drinking a few beers or smoking shisha.

Although a couple of days to visit the main sites of Sana’a is probably enough, there are lots of beautiful areas outside of Sana’a worth a visit including Thila, Kaukaban, Shibam, and Dar al-Hajar in Wadi Dhar. You will almost certainly need to coordinate a visit to these sites through a local guide or company as there are often military / police checkpoints that you will need to pass through.

Sana’a is a unique city with a long and tumultuous history. I witnessed spectacular development between August 2006 and February 2015, when I was last in the city, but I also slowly began to understand the tribal and political issues that make development and growth in Yemen so difficult.

Unfortunately, the current war for control of Sana’a and the Republic of Yemen has resulted in horrific devastation that can easily be seen in satellite imagery from Google Maps. Yemenis have a reputation for being incredibly strong and perseverant and my experience confirms these traits are very true.

I only hope the current conflict will end soon and foreign governments will put as much money into rebuilding the country as they have spent on military equipment destroying it. I look forward to the situation stabilizing so I can return to Sana’a and hopefully visit more of the country. Yemen is truly one of the world’s most historic and culturally unique places and it is a shame it has not been more accessible to tourists in recent years.