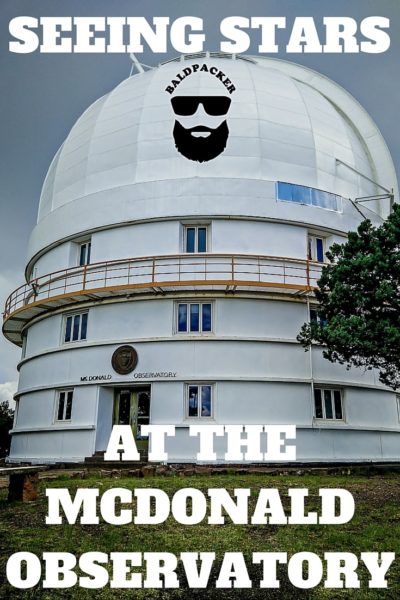 I’ve visited the McDonald Observatory twice now and thoroughly enjoyed it both times.

On the first visit, Sara and I quickly stopped at the observatory while driving back to Odessa from Alpine, choosing to drive the scenic highway 118 home. From highway 118 we drove up highway 78, the highest highway in Texas at 6791 feet, to the summit of Mount Locke. At the summit, we saw the buildings for the 82″ Otto Struve Telescope (the 2nd largest telescope in the world when it was completed in 1938) and the 107″ Harlan J. Smith Telescope (the 3rd largest telescope in the world when it was completed in 1968). Since it was only a quick visit, we simply enjoyed the magnificent views of west Texas before hopping in our car and driving back to Odessa. We didn’t know at the time, but we could have visited the Hobby-Eberly telescope for a free self-guided tour. Views from Mount Locke at the McDonald Observatory

Our second visit to the McDonald Observatory was planned specifically to explore the observatory and experience the observatory tours. To maximize our experience, we planned our visit during the New Moon in May 2016, which also happened to coincide with the peak of the Eta Aquarids meteor shower.

The Eta Aquarids happen every year in late April and May when Earth crosses the orbital path of Halley’s Comet. The Eta Aquarids are best seen from the southern hemisphere and since the McDonald Observatory is placed in the most southern dark skies in the continental, it should theoretically be the best viewing point in the country. Unfortunately, we could not control the weather and our visit was marred with clouds and rain which provided disappointing star gazing.

Our first program was the $5 Twilight Program, which occurred 1.5 hours before the “Star Party”. There are apparently two variations of the Twilight Program offered and ours was an indoor, 1 hour, classroom based program. The lecturer was very knowledgeable and she discussed our solar system and the original twelve zodiac constellations (Aries, Taurus, Gemini, Cancer, Leo, Virgo, Scorpio, Sagittarius, Capricorn, Aquarius, and Pisces) plus the lesser know 13th constellation of Ophiuchus.

I enjoyed the twilight program since it refreshed my knowledge about our solar system but Sara found it a bit too basic given she has been teaching similar subject matter to her grade 5 students this year. If we wanted to save the time and money, a few YouTube videos would have likely taught the same information, but I still enjoyed the delivery of the Twilight Program in the classroom.

The $12, ~2 hour Star Party was the main reason for our visit to the McDonald Observatory and we were thoroughly disappointed that the weather didn’t cooperate. Thankfully, there were enough cloud breaks that we still got to do some telescope viewing. There were large crowds and long lineups for the viewings but overall it was still a great experience.

The highlight for me was seeing Jupiter through a 24-inch telescope where its red stripes were visible as well as three of Jupiter’s four Galilean moons. Jupiter actually has 67 moons, but the four most massive, discovered by Galileo Galilei in 1610, were the first objects found to orbit another planet. I also really enjoyed seeing the famous double star of Mizar and Alcor in the middle of the Big Dipper’s handle. Mizar and Alcor, also known as “the horse and rider”, are two stars that appear as one unless you have great eyesight or optical help.

Ssince the star viewing options were limited due to the weather, we also attended one of two classroom lectures that were on offer. Our lecture provided interesting insight into our galaxy as well as other galaxies and really inspired me to do further reading about modern astronomy and our universe.

I brought my mirrorless camera, wide angle lens, and tripod with the hope of taking advantage of the dark skies for some astrophotography, but the weather conditions were uncooperative and there were too many people around to bother setting up. At the end of the night, I was able to capture this 30 second exposure from the parking lot, in between clouds and headlights, which gives some idea as to how dark and clear the skies can be.

Since the Twilight Program and Star Party basically necessitate staying overnight in nearby Fort Davis, the daytime Solar Viewing and Tour is a great way to experience the McDonald Observatory while driving through the area during the day. For $8, this 2.5 hour program was my favourite of the three tours we did. If you have less time, the 45 minute Solar Viewing portion is also available for only $5.

The Solar Viewing took place in the theater classroom where the lecturer used a remote telescope with special filters to show us live views of the sun. During the lecture he showed us live views of sunspots and solar flares and explained why they happen, as well as a lot of interesting information about our sun and other stars.

After the solar viewing, we boarded the shuttle bus to drive up to the 107″ Harlan J Smith and 362″ Hobby-Eberly Telescope.

The 107″ Telescope was built by NASA in the 60s and was the 3rd largest in the world when it was completed in 1968. The telescope weighs 160 tons and has 107 inch (2.7 meter) fused silica mirror that gives it light gathering power equivalent to 250,000x the unaided eye. For an idea of how big the mirror actually is, there is a concrete circle in front of the visitor center that I could easily lay across.

Me Demonstrating the 107″ Telescope Mirror Size

During our tour, the guide explained how the massive telescope works and how various equipment can be attached for different types of observation. I didn’t realize before visiting the McDonald Observatory that most astronomical work is done with spectrographs that disperse light into component wavelengths for analysis. Our guide also showed us how the floor of the building can be raised and lowered to work on the telescope and how the building’s dome rotates. 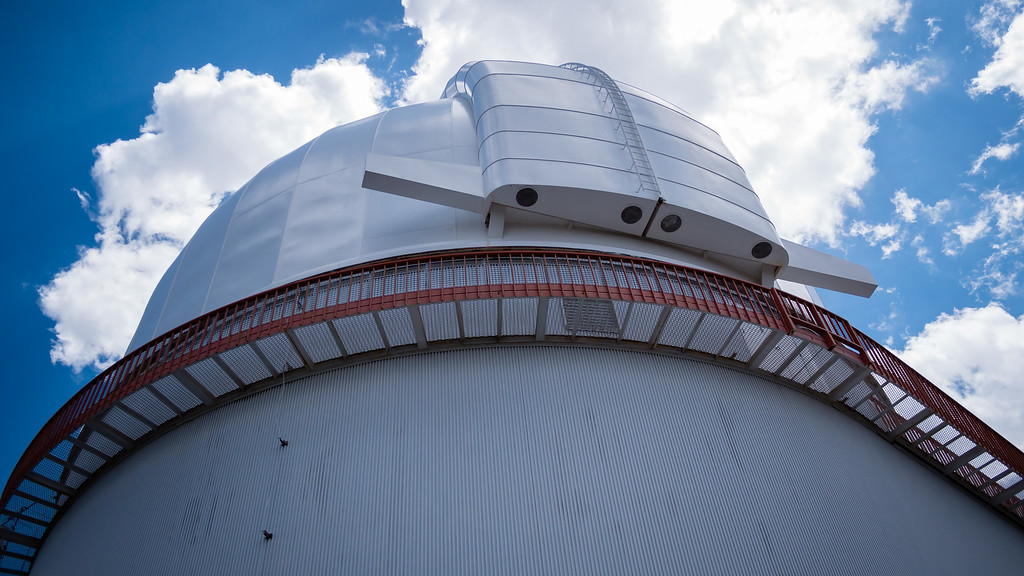 The Hobby-Eberly telescope is located on Mount Fowlkes, a short drive from Mount Locke where the 107″ Harlan J Smith telescope is. This telescope uses a much different design from the 107″ and was built with cost efficiency in mind. The telescope’s mirror is made up of 91 hexagonal mirrors that must be aligned exactly to reflect focused light into a target instrument above the mirrors that is moved to track the target. The mirror is actually 433 inches (11 meters x 10 meters), but only 336″ or 9.2 meters are actually reflecting to the target at any given time, making it the third largest telescope in the world.

The Hobby-Eberly is currently being modified for a Dark Energy Experiment (HETDEX) to give the telescope the ability to map the expansion rate of the early universe, looking back in time billions of years, to measure how clusters of galaxies moved in relation to one another as the universe evolved. 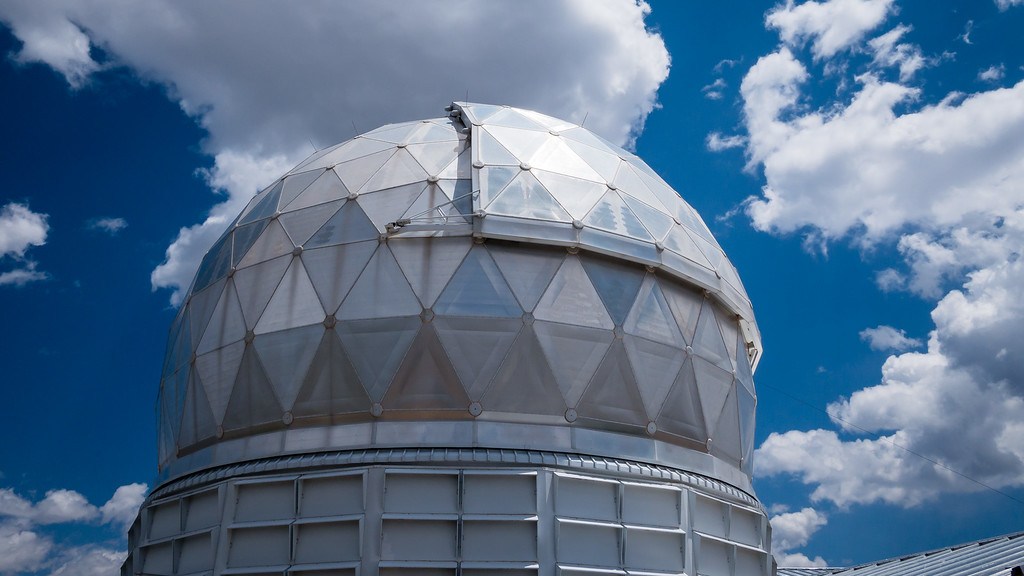 433″ Honeycomb Mirror Within the Dome

← Hiking Palo Duro • The Grand Canyon of Texas
The Essential Guide to Travel in Sana’a, Yemen →