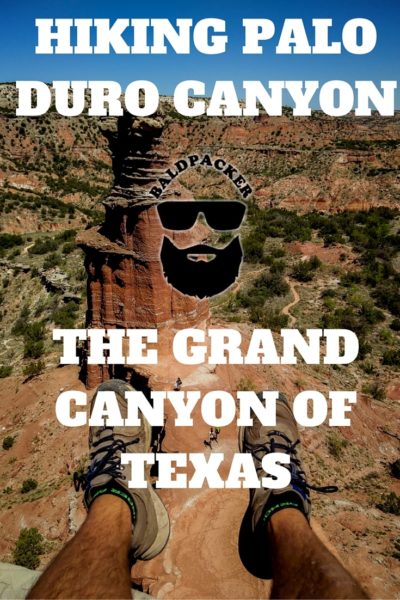 Palo Duro Canyon is the second largest canyon in the US gaining it the nickname as “the Grand Canyon of Texas”. It is believed early Spanish explorers discovered the canyon and named it “Palo Duro” or “Hard Wood” in reference to the large number of juniper trees growing in the canyon bed. 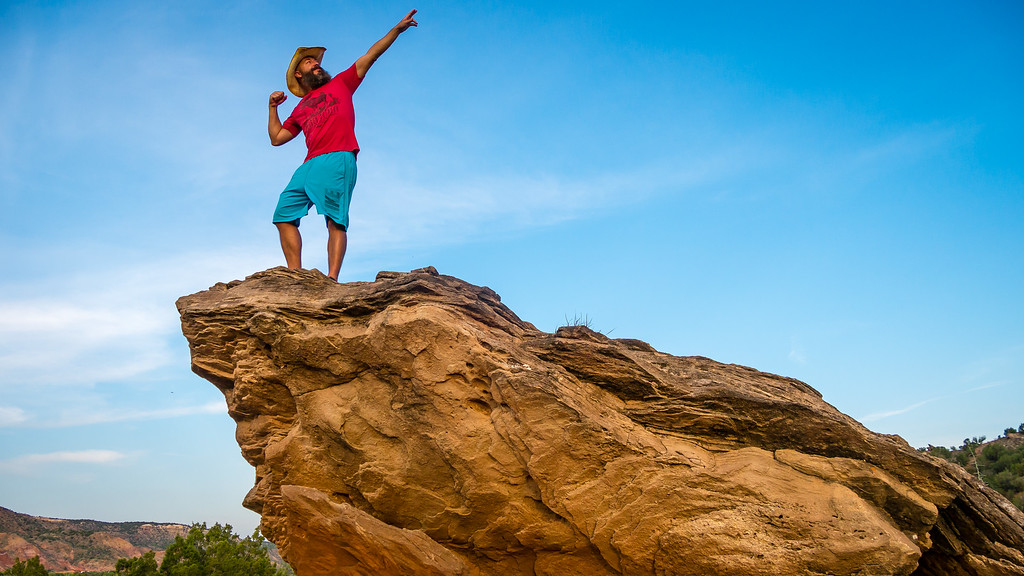 Me Posing in the Palo Duro Canyon

Located in the Texas Panhandle, less than an hour’s drive from Amarillo, Palo Duro Canyon is definitely a State Park worth visiting, especially for those driving the remnants of America’s infamous Route 66 which passes through Amarillo.

When we arrived we paid our fees at the visitor center and were directed to the Fortress Cliff Campground. Our site had a picnic table, sun shade, and there were water faucets and porta-potties nearby. There were around 20 sites in the campground and it appeared they were all full during the weekend in late-April we visited. I would definitely recommend making reservations when the weather is nice.

Although the camp site was very windy at times, we were still treated with a calm evening and a gorgeous sunset where the sky appeared to be on fire.

Palo Duro features over 30 miles (~50 kms) of hiking, biking, and equestrian trails. Generally, the hiking is very easy for experienced hikers, but you definitely need to bring a hat, sunglasses, sunscreen, and lots of water as it can be very hot and dry. It is worth mentioning that many of the trails are multi-use and you may encounter a lot of mountain bikers. In our experience, the bikers were very responsible and yelled out that they were approaching and told us how many were in their groups so we could safely stay off the trail.

After setting up our tent, Sara and I walked a loop down in the river valley around the main road – a combination of the Juniper Cliffside, Riversie, and Sunflower trails. The hike was very flat and easy and it offered stunning views over the colourful cliff formations, especially in the later afternoon light.

Since the hike was down in the river valley there were a lot of trees and greenery that helped block the wind. There was also this beautiful red and white rock outcropping with a large cave that people were climbing all over.

If you’re looking for an easy hike that you can make a short loop of, this is a good option.

Cave Along the Juniper Cliffside Trail

The lighthouse trail is the most popular trail in Palo Duro because it reaches a large red outcropping that looks like a, you guessed it, lighthouse.

The trail is 2.7 miles (4.3 kms) each way and generally flat and easy, except for a few difficult slipper dirt slopes near the end. The red rock outcroppings are quite impressive as they tower high above the flat surrounding landscape. 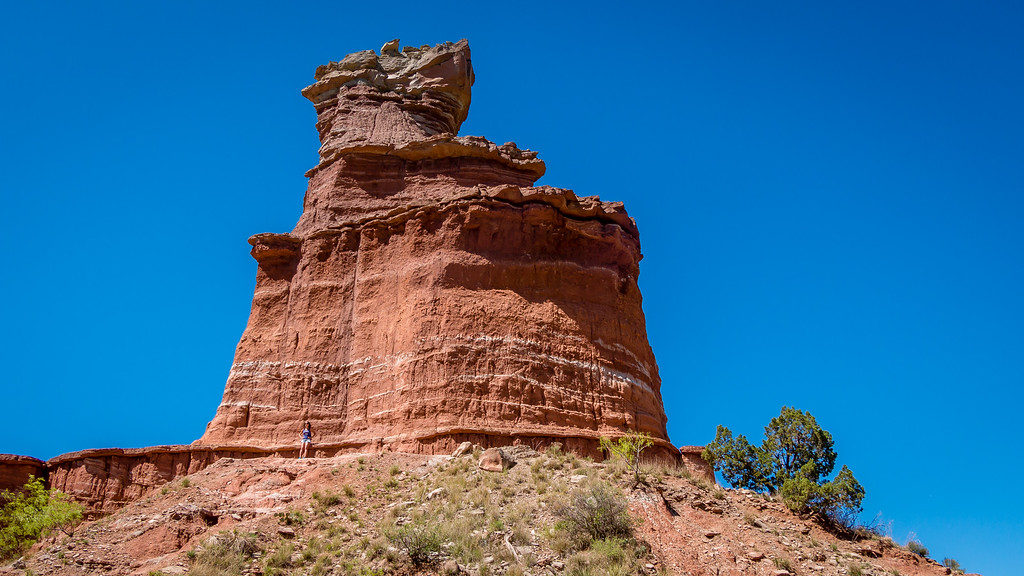 Sara Standing in front of the Lighthouse Formation

For a better view of the lighthouse I climbed around and on top of the second rock formation. It’s easy to walk up to this rock except for the last 10 feet which involve climbing up a sheer piece of sandstone with small hand and toe holds carved into the rock. It’s not for the faint of heart.

Me Standing on Top of the Second Rock Formation 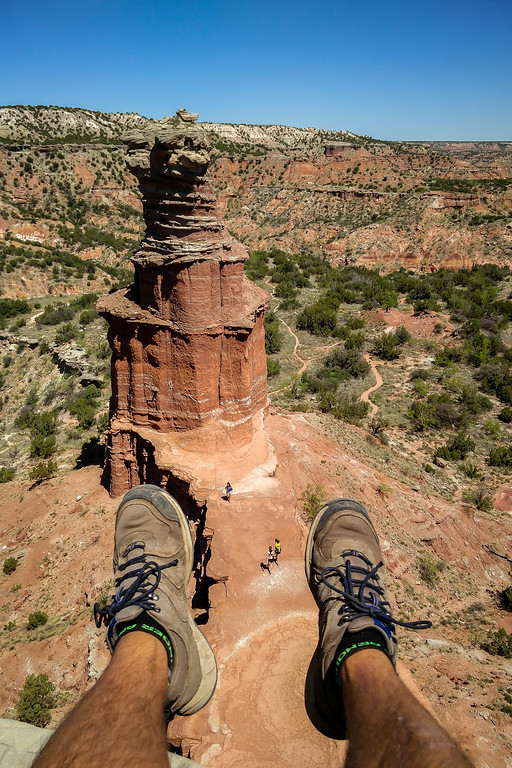 View of the Lighthouse From Above

The 3.1 mile (5 km) GSL trail, named after avid runners who helped build the Palo Duro Canyon’s trail system, is a great addition to a hike down the Lighthouse Trail. The GSL trail has a few more ups and downs but it is still a relatively flat and easy walk, provided you have enough stamina and water!

My favourite part of the GSL trail were the numerous stunning hoodoos poking above the horizon. I have also heard hoodoos called tent rocks, fairy chimneys, and earth pyramids and they are usually caused by a large durable rock protecting a tower of more easily eroded rock, as can be seen in the photo below.

Hoodoo on the GSL Trail in Palo Duro Canyon

There isn’t anything particularly scenic about the easy and flat 1 mile (1.6 km) Paseo del Rio trail but it certainly beats walking down the road back to the start of the Lighthouse Trail. This trail also seemed popular among mountain bikers so make sure you’re paying attention and are ready to get off the path if someone hollars from behind.

The only stop of interest to note is the Cowboy Dugout which is set up to show how cowboys lived in the 1880s. It is very dark inside but it gives a good idea of how cowboys beat the heat back in the day. 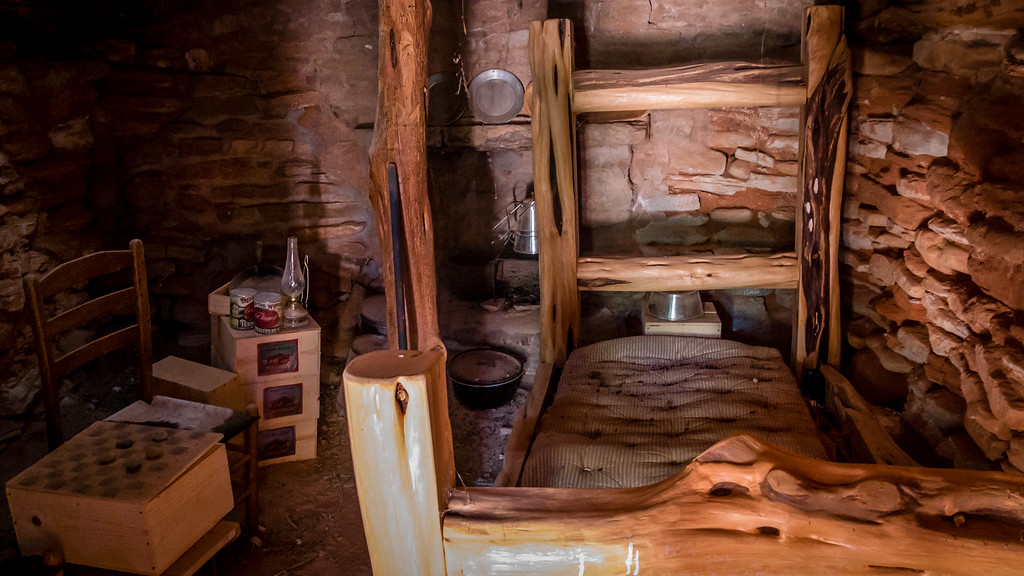 Immediately upon entering the Palo Duro Canyon Park there is the CCC Overlook which offers an excellent viewpoint over the canyon below. From this overlook it is possible to hike the 1.4 mile (2.3 km) trail 500 feet down to the park’s amphitheater on the canyon floor.

View from the Start of the CCC Overlook Trail

Unless you have two vehicles, or want to do the 1.4 mile return walk up hill, I would highly recommend combining the CCC Trail with the 1.3 mile (2.1 km) Goodnight Peak Scenic Loop and then returning back up to the CCC Overlook. There is still a decent change in elevation but the scenery from Goodnight Peak is beautiful and well worth the effort.

When we visited Palo Duro in late April, we were pleased to see a large number of wildflowers dotting the canyon floor. Flowers common to Palo Duro include Indian blankets, sunflowers, blackfoot daisies, tansy asters, paperflowers, and prickly pear cacti.

Sara and I were lucky enough to see a wild turkey, baby desert cottontail rabbit,  Texas horned lizard, numerous dung beetles, and a while lady bug. 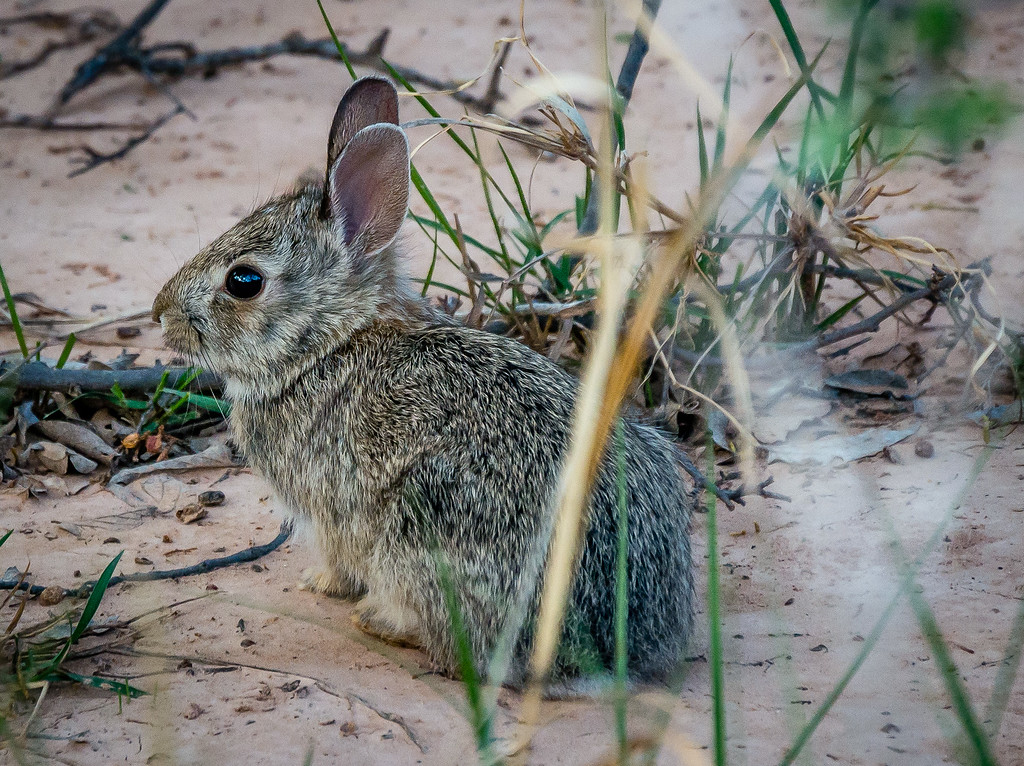 There are a lot of interesting things about Dung Beetles but three of my favourite facts are: 1) they can push up to 1,140 times their own body weight; 2) they use the stars to navigate; and 3) they climb on to their dung balls to cool their feet when the ground is really hot under the mid-day sun.

Dung Beetle Cooling Off its Feet 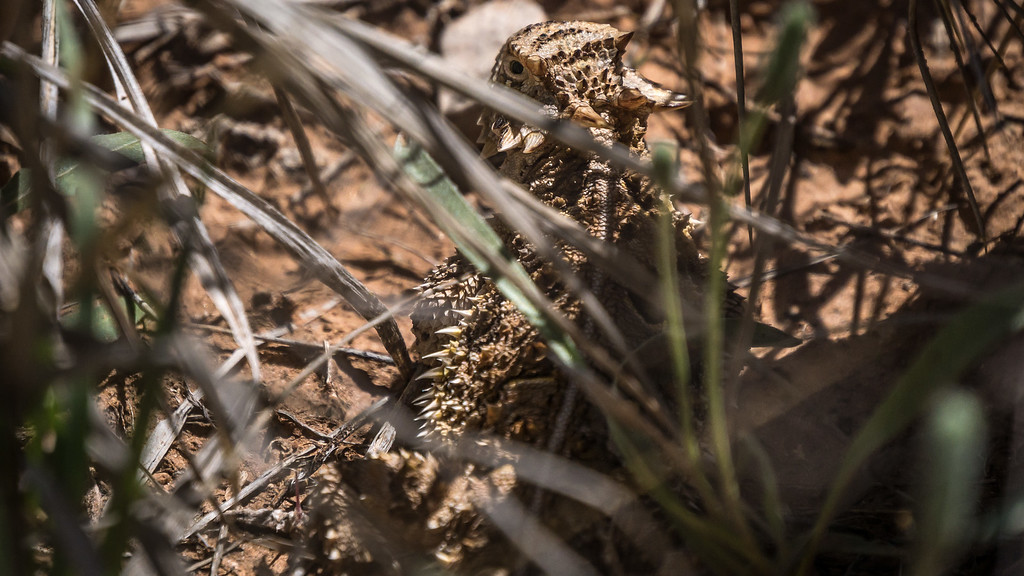 One morning I also noticed this white ladybug on our tent fly. I haven’t seen a white ladybug before and I thought the ‘milk cow’ design on its shell was deserving of a photo.

Overall, I enjoyed Palo Duro Canyon more than I expected I would. The hikes were generally very flat and manageable under the hot sun but also quite scenic. I was lucky enough to capture great snapshots of the flora and fauna and really enjoyed going into Amarillo for steak and beer after our longest day of hiking. If you’re in the Texas panhandle and are into camping, hiking, or photography, the Palo Duro Canyon is definitely worth a stop.

1 Comments on “Hiking Palo Duro • The Grand Canyon of Texas”