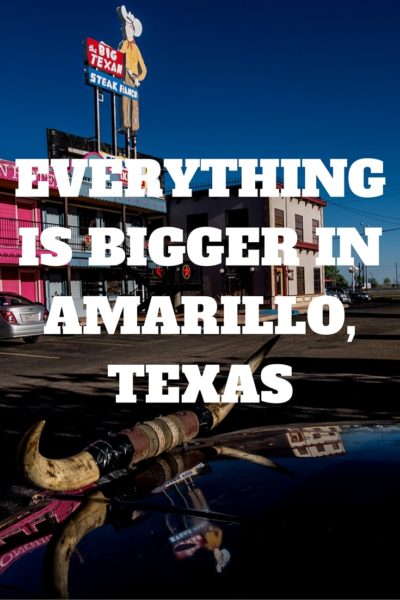 Amarillo is the largest city in the Texas Panhandle and known as the “Yellow Rose of Texas” (Amarillo means yellow in Spanish). Amarillo is also sometimes called Bomb City because it hosts America’s only nuclear weapons assembly and disassembly facility.

For travelers, Amarillo is best known for the Cadillac Ranch, Route 66, and Big Texan Steak Ranch, all of which we visited on a day trip from Palo Duro Canyon.

The Cadillac Ranch is not actually a ranch but a famous public art installation created in 1974. The Cadillacs were moved to a cow pasture along Interstate 40 in 1997 and the “Ranch” is now easily seen and visited from the highway.

For a quick stop, on the corner of the I-40 Frontage Rode and Hope Road, there is a giant “2nd Amendment Cowboy” and three Cadillacs in good condition on display at the Amarillo West RV Park. Texans sure love their guns! 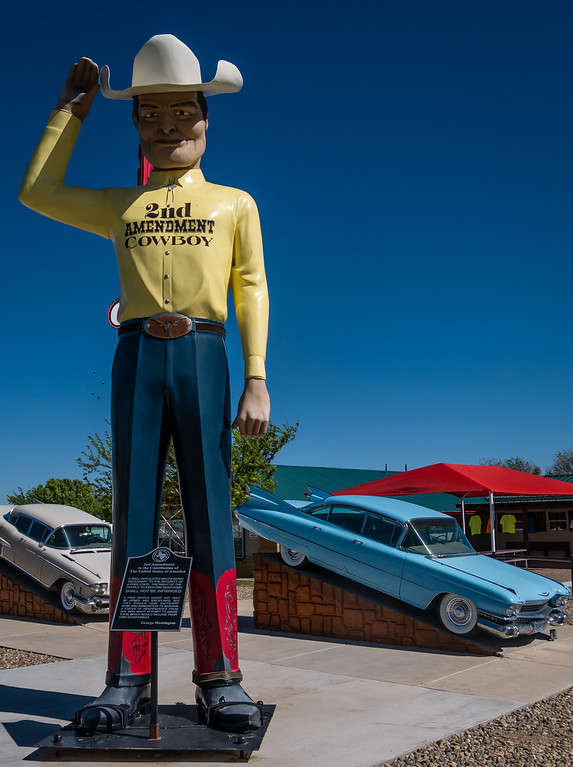 Unfortunately, the Cadillacs are a lot more beat up than they were in photos from the 70s but people have tried to keep them artistic by layering them with layer and layer of paint and graffiti tags. 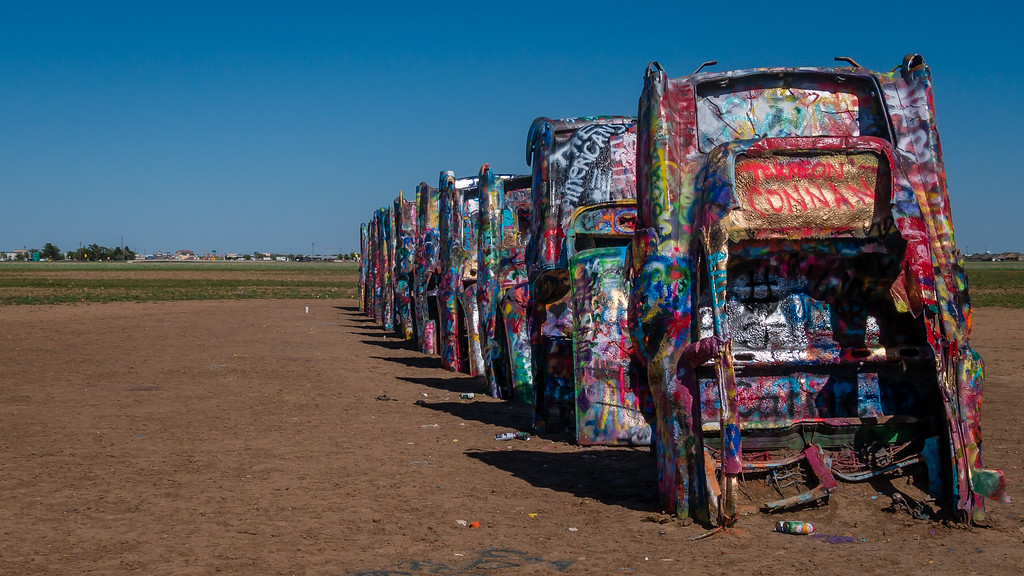 We didn’t bring our own paint but there were loads of half-filled containers laying around so we took the opportunity to add our mark. 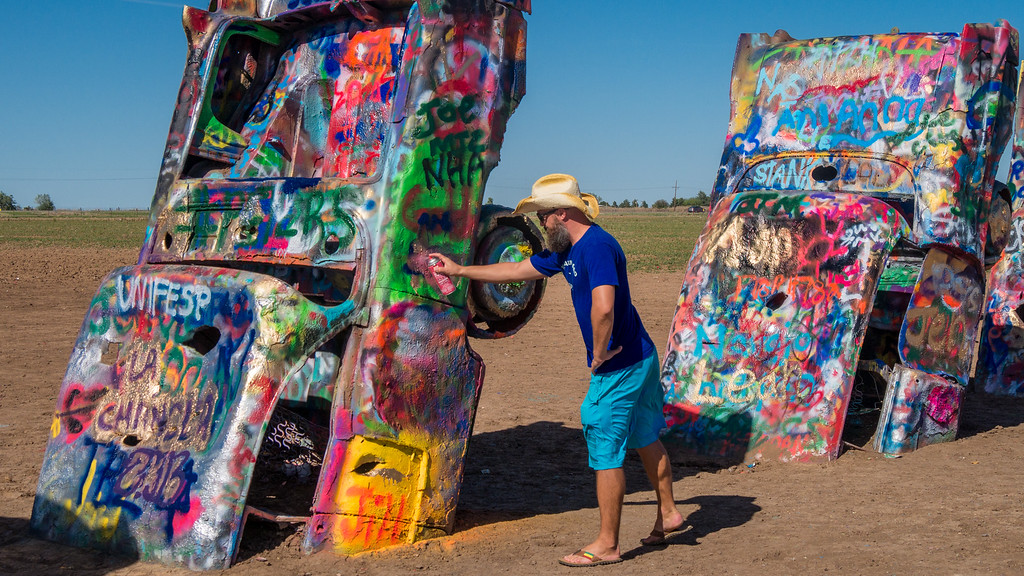 The Cadillac Ranch is worth a stop because of its pop culture fame, but it’s honestly not that exciting of a site.

Route 66 was once America’s longest highway at 2,448 miles (3,940 km). Known as the “Mother Road”, Route 66 extended from Chicago, Illinois, across the Texas Panhandle through Amarillo, to Santa Monica, California, until it was decommissioned in 1985.

Amarillo now features the 6th Street Historic District which is filled with buildings of Spanish Revival, Art Deco, and Art Moderne designs. These days, most of the buildings are either hawking antique and souvenir wares to tourists or serve as popular restaurant and bar stops for people traveling the route. Smokey Joe’s Texas Cafe seemed especially popular with bikers and seemed like the place to stop for a beer if you’re traveling on 2 wheels. 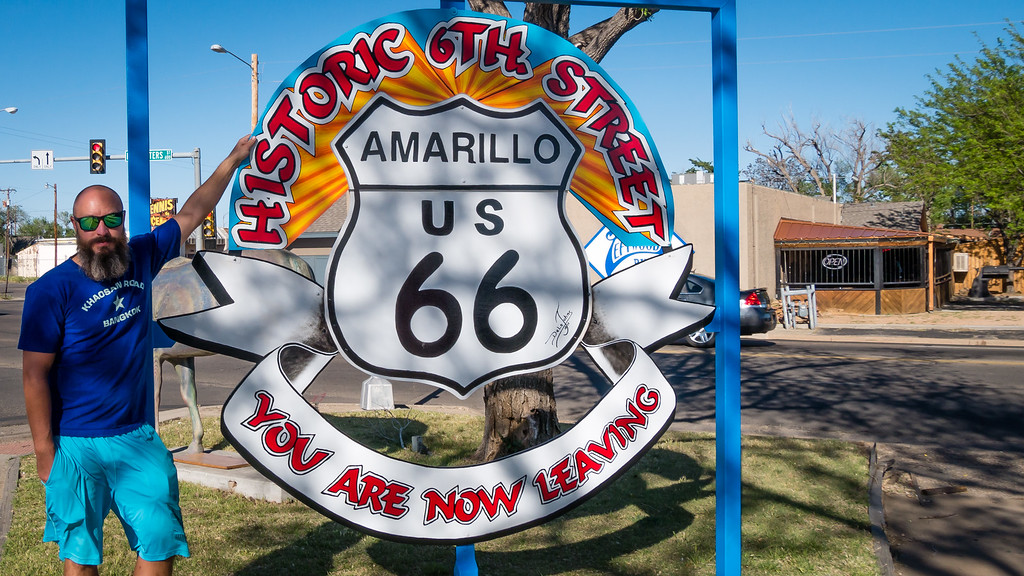 We also saw this barbecue which was appropriately sized for the 2nd Amendment Cowboy.

More than anything in Amarillo, I was looking forward to eating at the Big Texan Steak Ranch. The Big Texan was opened in 1960 along Route 66 before being moved to its present location on the I-40.

The Big Texan became famous for its billboards along Route 66 (now along the I-40) inviting travelers for a FREE 72 oz (~2kg) steak. A restaurant doesn’t last for over 55 years by giving away free meal though and the challenge is that you need to eat the entire meal (shrimp cocktail, baked potato, salad, roll, and 72 oz. steak) within an hour or you pay $72.

The Big Texan is like a Disneyland for steak and beer lovers. If you plan to stay in Amarillo, you should take advantage of the free limo pick-up and drop-off service, featuring limos with longhorns up front!

If you’d prefer dining on Big Texan steaks for breakfast, lunch, and dinner, it may be convenient to stay next door at the Big Texas motel. It is designed to look like a street in the old west and features a Texas-shaped swimming pool. 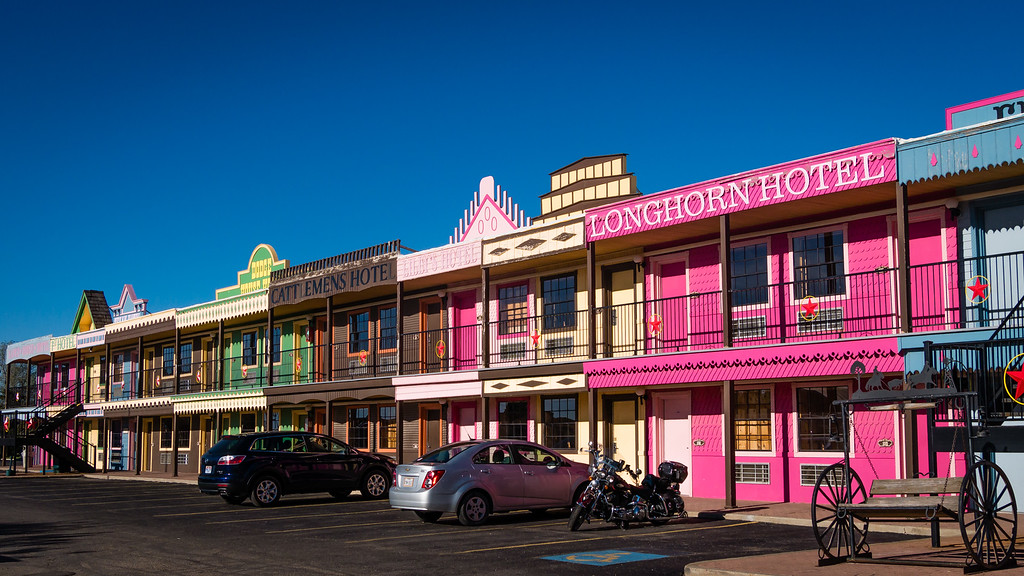 Although I was tempted to try the 72 oz. steak challenge, once I discovered The Big Texan had an on-site brewery I knew I’d rather save space for beer!

I started with a beer sampler so I could try 10 of the Big Texan’s most popular beers. My favourites were the Rattlesnake IPA, Whoop Your Donkey Double IPA, Texas Red Amber Ale, and Whiskey Barrel Stout. If you’re after something a little lighter, the Palo Duro Pale Ale and Honey Blonde Lager were also pretty good and the Pecan Porter is a fun and unique dessert beer. The Rasberry Wheat and Hefeweizen need some work and are not worth ordering, in my opinion.

After my sampler, I quaffed a Whoop Your Donkey with dinner and finished my meal with a whistle-wetting pint of the Red Amber Ale (it paired nicely with my beef).

I loved the Whiskey Barrel Stout taster so much that I bought a half gallon growler to take home with me. Considering it’s a 9.2% ABV oatmeal stout aged in oak with bourbon, the $15 asking price is very reasonable!

For dinner, I went with the biggest steak on the menu (other than the 72 oz. challenge), a 36 oz. Houston Cut Ribeye. The steak was juicy and tender and definitely a gut buster.

Although I managed to finish my steak handily, I can imagine how difficult the 72 oz. challenge would be given that steak is DOUBLE the size of this beast. I am definitely happy I saved enough room for 72oz. of beer though! 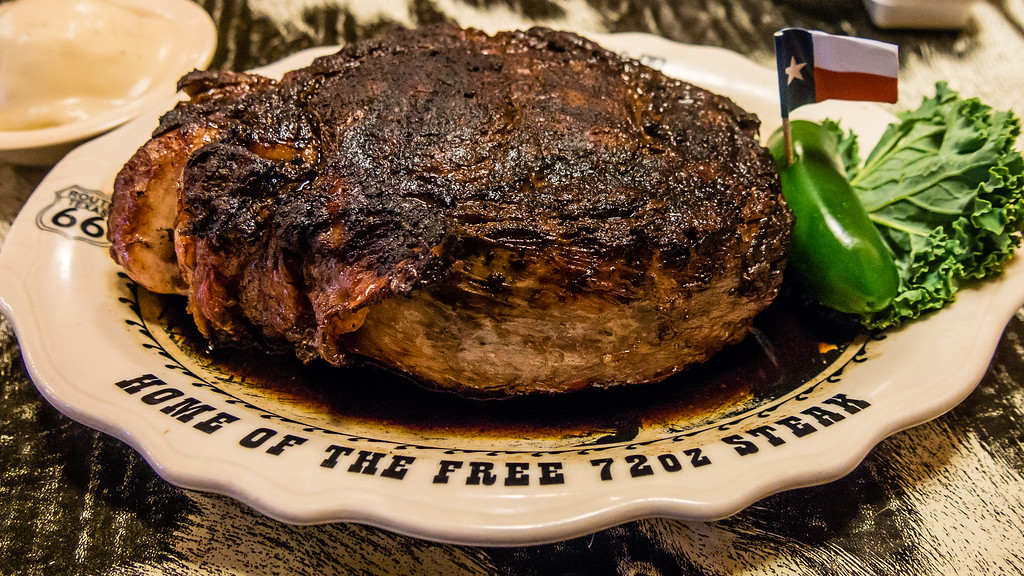 Sara ordered an equally impressive 21 oz. Lone Star Cut Top Sirloin and, although she finished most of it, I was stoked to have her leftovers for a steak and egg breakfast. Sara ordered a caesar salad for her side and I’d consider that a better option than the mashed potatoes I ordered as it was a properly prepared salad. 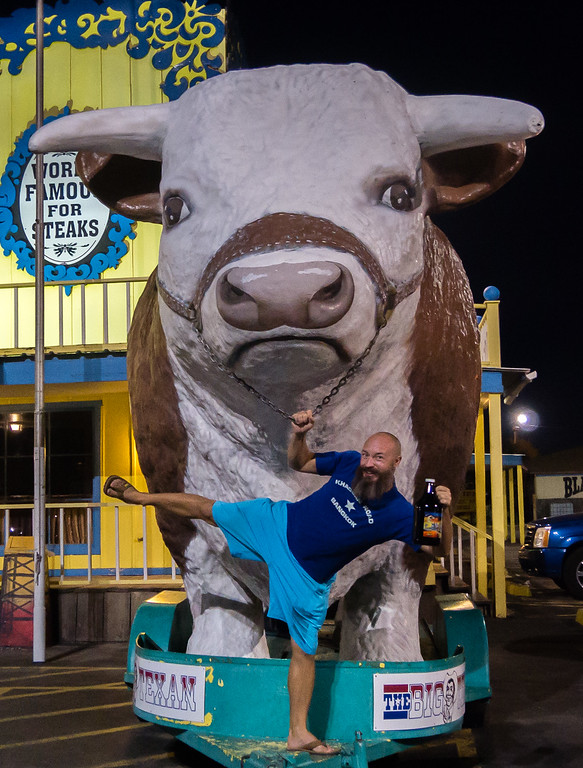 Cheers to the Big Texan!

The best part is, you don’t even need to fret the Texas-sized calories as the Palo Duro Canyon State Park, and its stunningly beautiful hiking trails, are less than an hour’s drive away.