The Capital of Transylvania: Cluj

I took an overnight bus from Budapest to Cluj-Napoca (Cluj for short) that departed at 23:00 and arrived in Cluj at 08:00 the next morning. I had booked the bus in advance through the Orangeways website, but it did not seem there was need to do so as the bus was empty for the journey. I had hoped that after my many late nights of partying at Oktoberfest and in Budapest I would be so exhausted that I would be able to sleep the whole journey, but unfortunately I only managed a few hours of rest due to the bumpy roads, many bus stops, and customs procedures. Since I arrived in Cluj so early I did not expect the hostel to have my bed available and decided to make the long walk from the bus station, past the train station, and into the old town where my hostel, The Transylvania Hostel, was located. I was surprised at how many cars and people were in the streets at 08:00 as I was expecting a very slow and relaxed pace of life in Romania given its communist past. 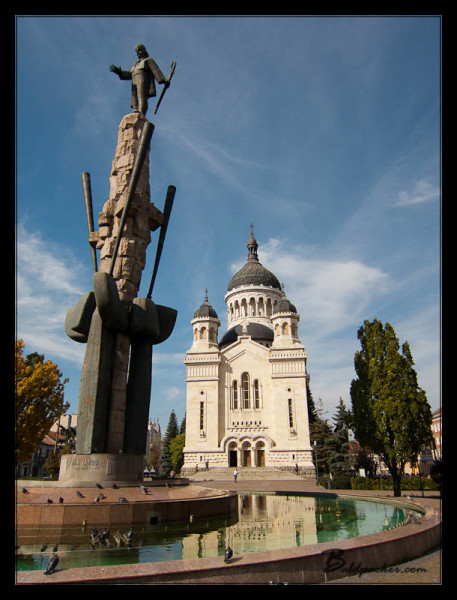 Cluj is the capital of the Transylvania region of Romania and it is a happening college town. Within central Cluj, it is very easy to walk everywhere and there are many restaurants, bars, and parks to hang out in. Cluj does not have a lot of tourist attractions within the city itself and the first day I saw the statue of Matthias Corvinus in Union Square, St. Michael’s Church, Theater, and the Orthodox Cathedral. All three monuments are in short walking distance of the hostel and comprise the main tourist sites in the city. The other main attractions are the Central Park and Botanical Gardens, but given the chilly October weather the idea of walking to them did not greatly appeal to me. 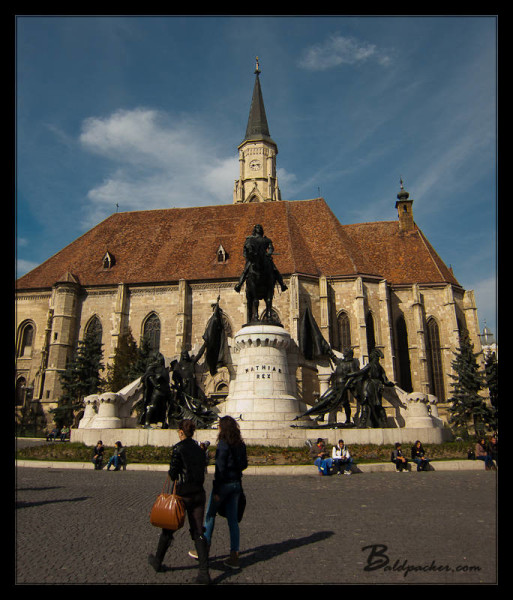 My favourite part of Cluj was probably the Transylvania Hostel. The hostel staff is wonderful and there are very well set-up social areas which led to great dinner and drink nights over the course of my stay. Given that most of the tourists faced the same difficulties as I did in finding activities to do in Cluj, especially with the chilly weather, I found myself just hanging out with other backpackers around the hostel. It is the perfect town for doing that though as it is nice just to get out and watch the beautiful women go about their daily lives. Compared to my experience in Hungary, many Romanians spoke excellent English, and most were very happy to socialize over drinks. The hostel staff even brought us wine that had been made at a nearby monastery and homemade țuică, a 120 proof plum spirit. They taught me that the trick to drinking țuică is to take a deep breath before taking the shot, so that you exhale the strong alcohol fumes. I’d also recommend avoiding open flames on the exhale as it would not surprise me if I could blow flames on țuică! 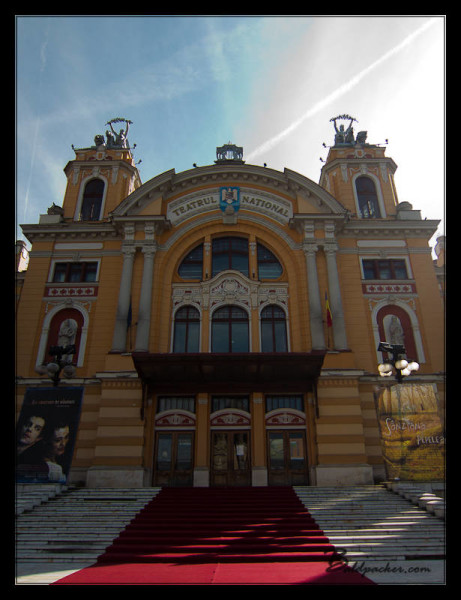 I met an excellent cast of characters over my stay including: an American trained chef snowboarder who had taken 7 months off to travel; three wonderful Germans who were great for a drink and a laugh; a Kiwi who had been touring Eastern Europe on a bicycle; another Kiwi who had been living in a small town of 200 non-English speakers in Southern Italy where he was working on learning the language; a hostel worker who had been touring Europe on a motorbike before staying in Poland long enough to learn Polish and setting up temporary shop in Cluj; an American hostel-consultant who had been in Cluj for 3 years and had helped making the Transylvania hostel so great; a Vietnamese girl who had moved to Cluj for college on a scholarship and was seriously dating one of the hostel workers; and many others who were always great for a story and a laugh. 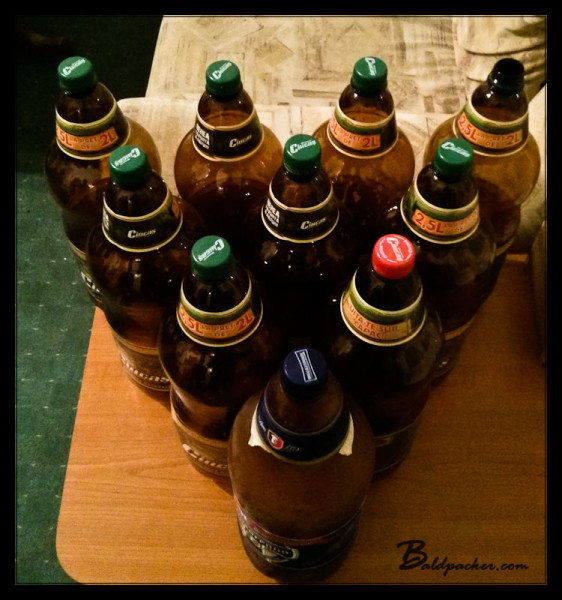 Empty ‘Deer Beers’ After a Good Night at the Hostel

The trained chef was legendary as he brought everyone together my first two evenings at the hostel to cook wonderful meals. The first night we had an excellent ratatouille on rice which was followed by wine, beers, and țuică until 4am. After a prolonged sleep-in we mustered up the energy to do it again a second night, making a hearty chicken noodle soup that was the perfect pick-me-up from the cool weather and previous late night Unfortunately, the soup was so good that we managed to stay up until 3am drinking beers again, making us less than motivated to make dinner the third night. Luckily, there was a guy from my home town of Calgary, Canada who was a ‘friend of the hostel’ that offered to prepare fajitas for 25 lei. Given our meals the previous nights had worked out to 4 lei ($1.25) and 7 lei ($2.15) we thought this was a bit steep, but after negotiating the price down to 15 lei we were all in. The guy from Calgary was actually a chef who was planning to open a restaurant in Cluj and the pork and chicken fajitas with corn mash and homemade salsa were excellent. After dinner we all had a shot or two of țuică as it is the perfect digestive, but unfortunately the chef was a better eater than drinker as he was suddenly a belligerent drunk. None of us exactly know what happened, but before we knew it he was insulting everyone in the hostel, including myself, and falling on his face drunk. Luckily, the owner of the hostel and the hostel consultant were around to help us pour the chef into his cab, but it was a strange experience to say the least. Even though it was now late and I had an early flight to Madrid the next morning, we headed out for one beer at a bar constructed of cardboard. It was a very impressive place filled with college students that had tables, walls, artwork, chairs, and lamps all constructed of cardboard. After one beer I had to call it a night to pack my bags for my early start the next day, but it was definitely a sociable stay in Romania. 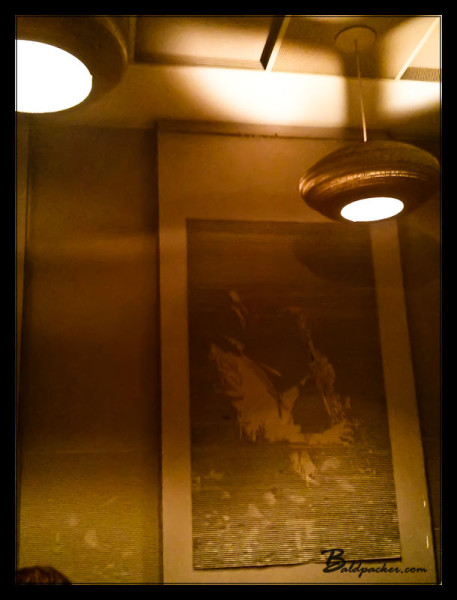 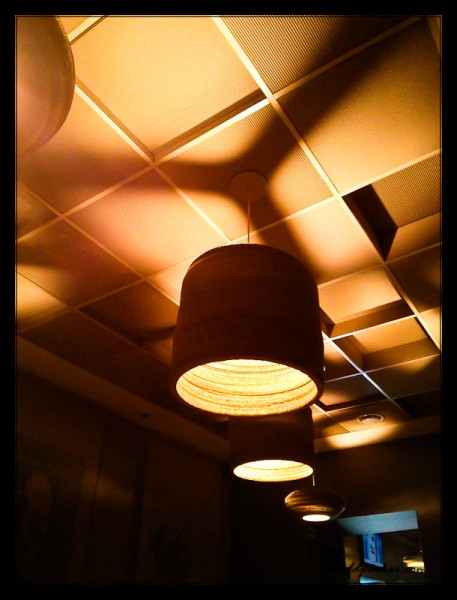 Speaking with the other backpackers, I learned that one almost needs to experience Transylvania on bicycle, motorbike, or by car. Most of the castles, mountains, and caves are difficult to get to on public transportation and the region has not really been developed for tourism yet. I would certainly like to return to the Transylvania region again with a lot more time to allow for further exploration, hopefully with wheels of my own to enable truly seeing the rural areas.