Saipan is a small pacific island, 190km North of Guam, which is part of the Northern Mariana Islands. Saipan is only 19km long and 9km wide, and has a population of less than 50,000 people so it is an island I had not heard much about until I started researching the TCC country list.

I was scheduled to arrive in Saipan from Guam at 07:30 in the morning on Christmas Eve Day and had arranged for an early check-in at the Himawari hotel around 9am for US $20 extra. I had read that taxis from the airport into town were an extortionate $20 so, being a man of principle, I decided in advance that I would rather walk the 12kms to the Himawari hotel along the ocean, sightseeing on the way, than allow some taxi driver to rip me off. Unfortunately, my flight from Guam was delayed nearly two hours so by the time I finally arrived in Saipan it was already check-in time and I began thinking a US $20 taxi would be worth it. Oddly enough, when I began looking outside the airport for a taxi, I could not find one and it seemed like most other passengers either had people waiting to pick them up or rental cars. Inspired once again to get some exercise and make the long walk, I set out on foot for the Himawari hotel in Saipan’s largest village, called Garapan. 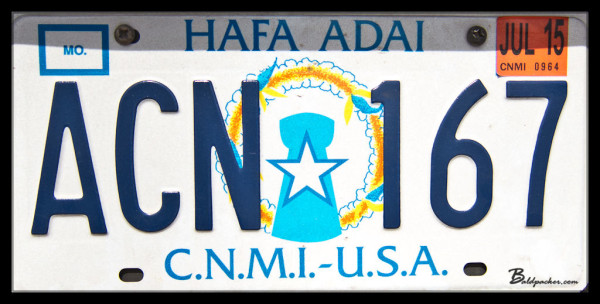 Before I talk more about what I saw, I should give a quick summary of Saipan’s history as it has significant impact on the tourist sites of the island. Saipan was captured by Japan in 1914 during WWI and became a center for Japanese settlement after Japan was awarded formal control of the island by the League of Nations in 1918. Many ethnic Japanese, Koreans, Taiwanese, and Okinawans arrived to develop sugar plantations and sugar refineries.

In WWII, Japan considered Saipan as one of its last defenses for the Japanese mainland and strongly committed to defending it. The battle of Saipan in 1944 was one of the largest campaigns of World War II and the US Marines and Army spent more than three weeks fighting heavily to secure the island from the Japanese. Over 1000 Japanese committed suicide by jumping over “Suicide Cliff” and “Banzai Cliff” and those sites retain strong historical significance today. After the end of WWII, Saipan became a Trust Territory administered by the United States and continued to be dominated by US Military. Since 1978, Saipan has been a municipality in the Commonwealth of the Northern Mariana Islands, but the US still administers some aspects of the islands, including its customs and border control. Interestingly, when I was in Palau, I met an American military family which was stationed in Japan and when the mom said “Saipan was liberated by the US Military” the father disagreed and succinctly told me “Guam was liberated and Saipan was invaded”. Although the islands are quite close, the history, heritage, and economies of the islands is very different and I could feel this while traveling around.

With that history in mind, I began my two hour walk to the Himawari hotel where I began to develop a feel for the island. Saipan’s economy appeared to be quite weak and most commercial buildings were run-down shopping centers containing a small gambling house, “massage” parlour (happy ending?), and food stores advertising the fact they accept food stamps. Although the buildings were not very nice to look at, the beautiful vegetation and fresh air still made the walk enjoyable. 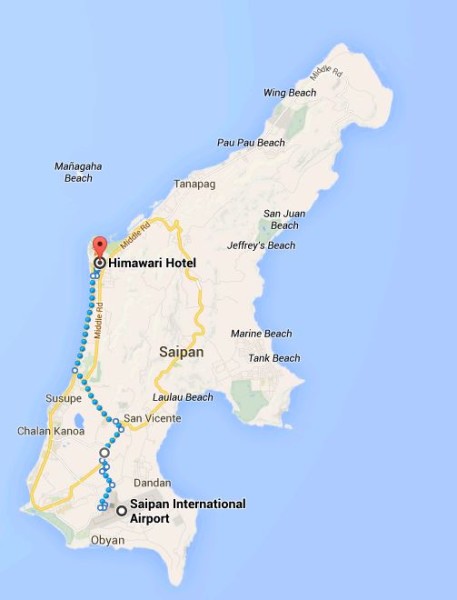 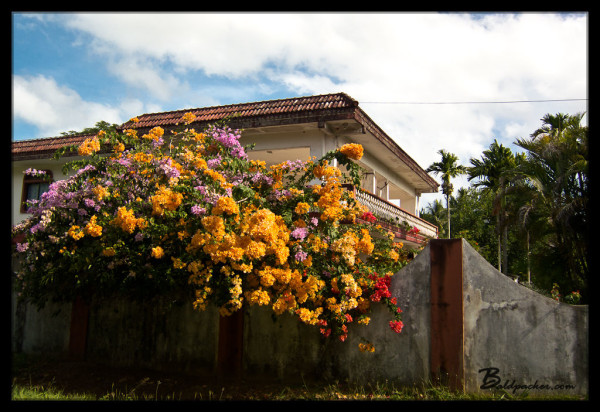 House and Flowers on Saipan 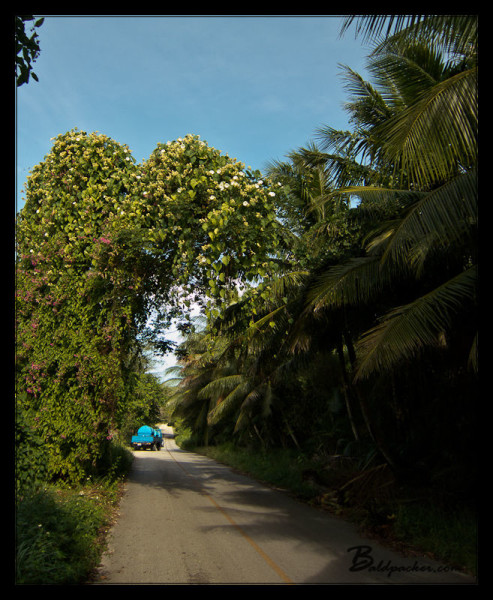 Side Road on Saipan 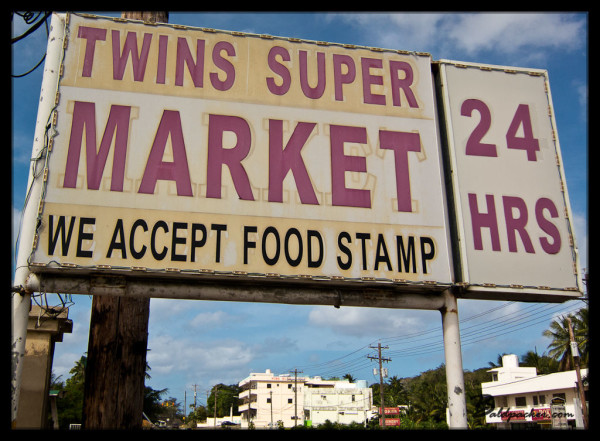 Juxtaposed against the buildings, which reminded me of those I’ve seen in developing Asian countries, the roads and cars were very American. Whereas in Asia one would normally see lots of people on the streets going about their daily lives, in Saipan I felt like the only person who was not driving a shiny new truck! The walk to Garapan from the airport was definitely a long one, especially with my backpack, but I did enjoy walking along the water front. That said, there was not much to see other than a couple naval vessels far offshore and the occasional historical monument documenting Saipan’s invasion during WWII.

By the time I finally arrived at the Himawari hotel, it was already 11am and the friendly receptionist was nice enough to waive my $20 early check-in fee. She also promptly organized a shuttle back to the airport for me the following day when I planned to return to Guam for Christmas. The Himawari Hotel was a great deal at US $59/night given I could not find any hostel or backpacker type accommodation on the island. 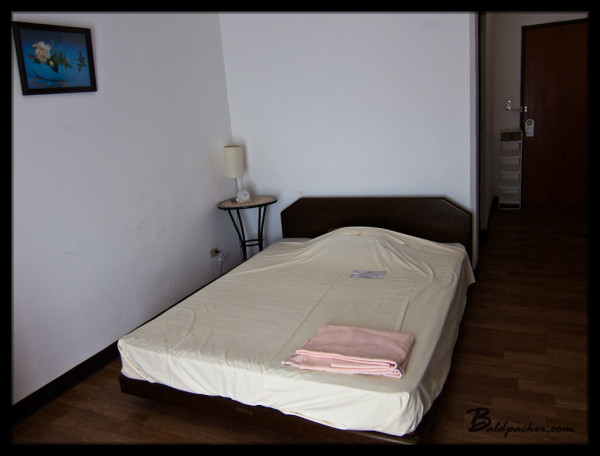 After reaching my room, I quickly called Marianas Trekking, a tour company that I had pre-arranged a Grotto Snorkeling & Spa tour with in advance to let them know my room number for my afternoon pick-up. I am happy I called as they advised that the water in the Blue Grotto was extremely rough and therefore it was closed off to swimmers. I was offered a few alternate tour options and I decided that rather than snorkeling and relaxing at the spa, I would go mountain biking instead for US $65. Exhausted after flying through the night and my 12km walk, I tucked in for an 80 minute power nap before my tour pickup was scheduled to arrive.

My Marianas Trekking tour shuttle driver arrived as scheduled and took me to the main tour office, a big building located next to the Mariana Resort & Spa a short ways out of Garapan. Marianas Trekking offers a number of tours including hiking, mountain biking, kayaking, snorkeling, paddle boarding, and also had some very fast go-carts ripping around an outdoor track. The company is very well organized and I would recommend their reasonably priced tours to anyone visiting Saipan. My mountain biking guides were friendly young local guys and the rest of my group consisted of a South Korean family of four that had not done much biking before.

After a safety briefing and video, our group piled into a passenger van and our bikes we loaded into a support truck. We first stopped at the Blue Grotto but unfortunately the access was closed and there was even a guard stationed to ensure no one went down towards the water. 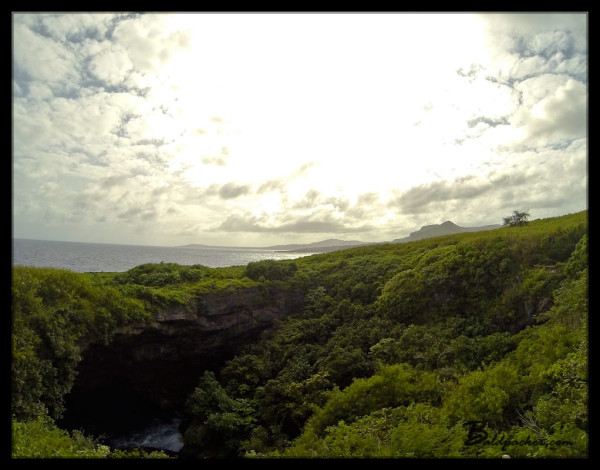 We then drove up to Suicide Cliff which was given its name due to the number of Japanese who committed suicide by jumping off the cliff to avoid being captured by the US during World War II. 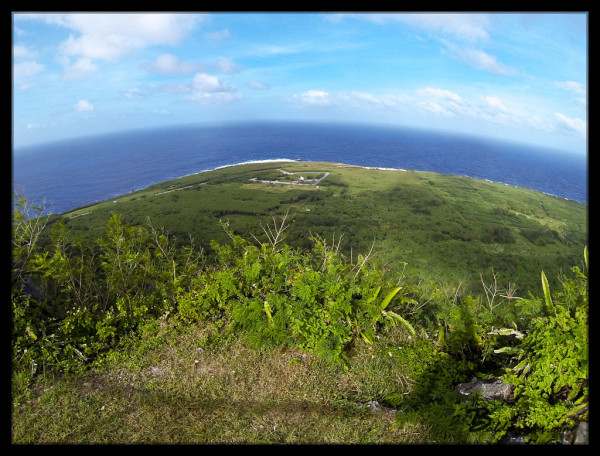 In the Suicide Cliff parking lot the guides gave the Korean family a quick lesson on changing gears and braking their mountain bikes, and as they wobbled around I quickly realized that my mountain biking adventure was going to be a relaxed recreational ride rather than a downhill adventure. The guides could tell I was disappointed we wouldn’t be doing any high speed high adrenaline racing, but I was still happy to have a relaxed sightseeing journey instead. 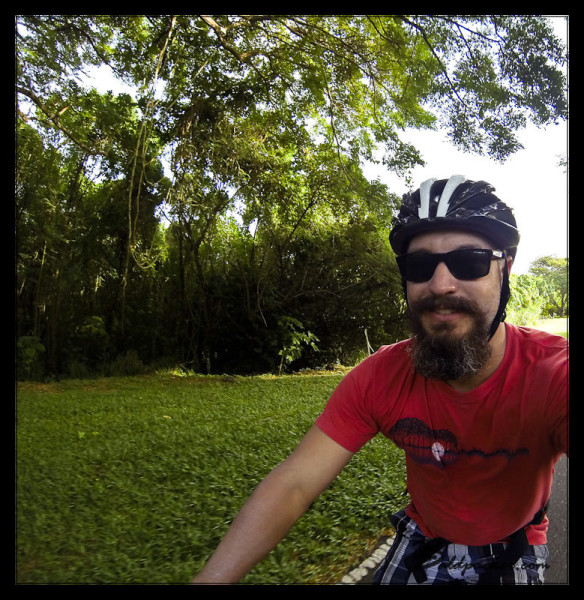 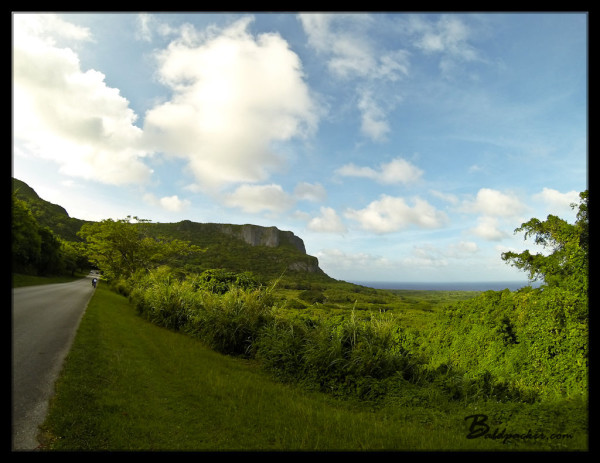 We rode down the asphalt road which was relatively steep and curved and I could tell the guides were very concerned about the Korean family falling off their bikes. We took it slowly and thankfully no falls occurred before our next stop at the Last Command Post.  The Last Command Post was a half cave, half bunker, used by the Japanese during WWII. There is a large hole in one side of the bunker which was caused by a direct hit from a US battleship offshore. It was definitely possible to see where rounds had hit the walls inside the bunker and it made me think about how horrific of a time it must have been for those involved. There are a number of large Japanese artillery canons, tanks, and other weaponry stationed around the bunker as well as several memorials which dot the entire island. 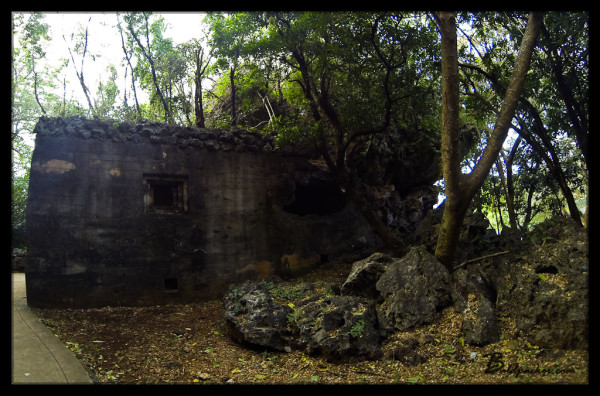 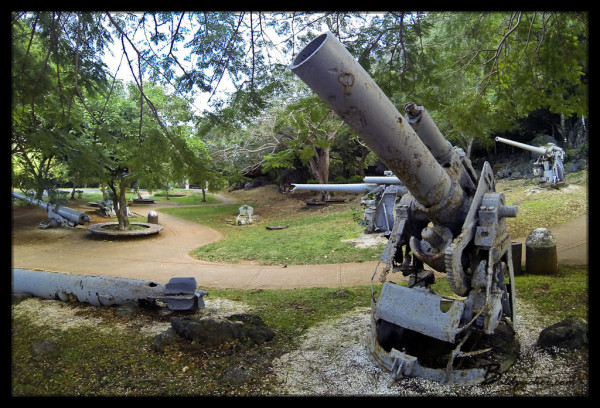 From the last Command Post we rode on to a dirt single track, where two of the Koreans decided they’d ride in the truck to our next stop rather than risk being impaled by a tree. The dirt single track more fun for me but we still had to ride relatively slowly as the Korean father and son still had shaky riding skills. Our final stop was Banzai Cliff, another place where hundreds of Japanese committed suicide during the battle of Saipan. There were a number of Japanese and Korean monuments in the area and it was sad to think such horrific events occurred in such a beautiful place. 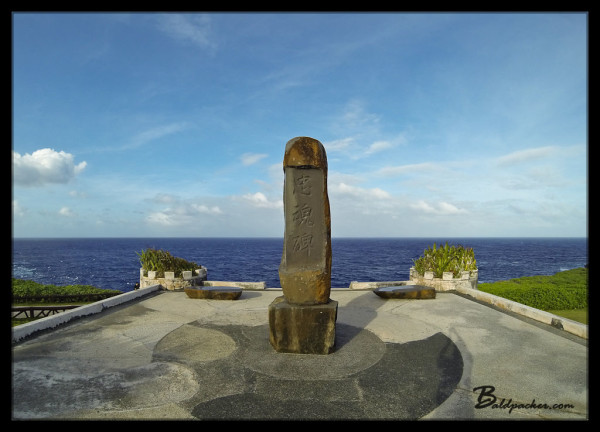 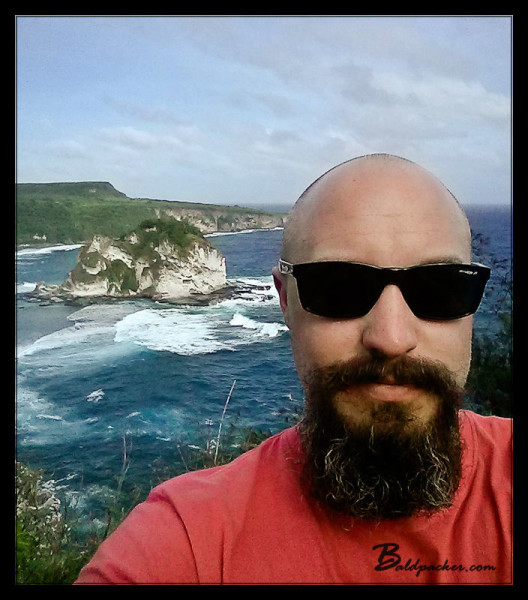 One thing I noticed while mountain biking around was how many Asian tourists had rented American muscle cars. It seems like most tourism to Saipan is from Asian countries it seems like the tourists want to try stereotypical American things like driving Mustangs and Camaros, eating burgers, shopping, and drinking Budweiser.

From the Banzai Cliffs, we rode back to Mariana Trekking’s tour office where I met Chris, the American fellow who owned and operated the Marian Trekking tour company. He was a very friendly guy and told me that he and several others had spent weeks hand-cutting the single track mountain bike trail that I had mountain biked on through the jungle. Respect. Overall, I really enjoyed the tour, found it good value for the price, and would recommend Mariana Trekking to others looking to get out and do activities on the island.

When I was shuttled back to the Himawari Hotel, the driver commented that they served great sashimi at the Himawari Hotel’s Japanese Restaurant. When I booked my room I hadn’t realized it, but the Himawari Hotel is actually built on top of a large supermarket and Japanese restaurant (the hotel reception is also the supermarket check-out). I later read the Himawari Japanese restaurant was one of the best in Saipan for fresh sashimi but felt even more confident in dining there after hearing it from a local! Having not eaten for the whole day and quite hungry from mountain biking, I was eager for a unique Christmas Eve dinner of sushi, sashimi, sake, and cocktails. Everything was so delicious that I kept ordering and eating until I was absolutely stuffed. 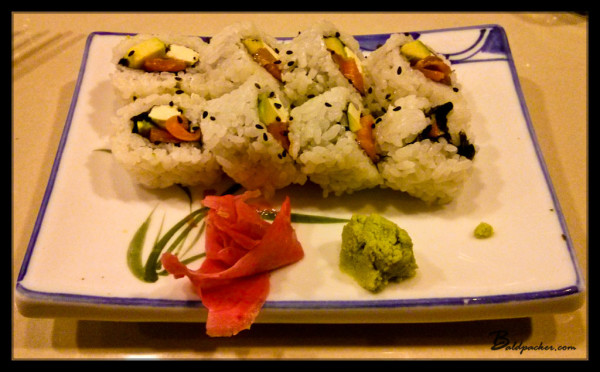 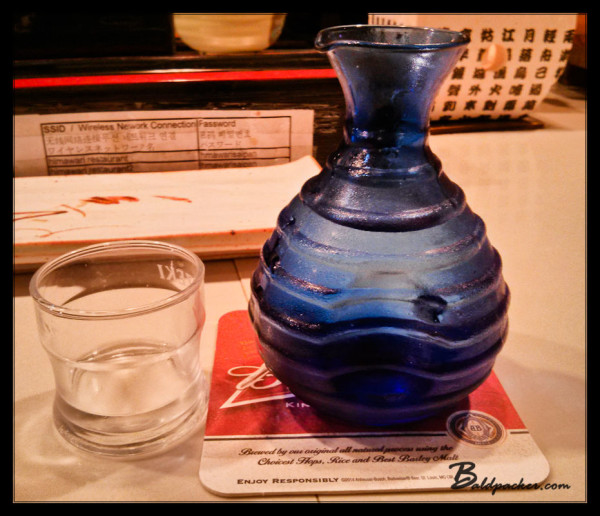 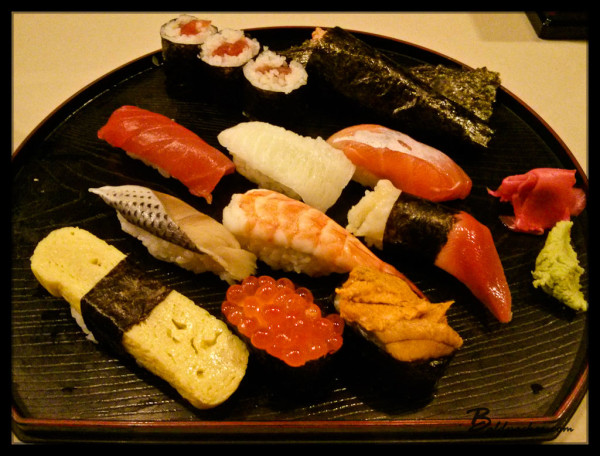 From the Japanese Restaurant, I wandered around town looking for a bar or club for some more social entertainment. I passed a number of high-end retail outlets, clearly aimed at wealthy Asian tourists, but could not find any fun looking places for an evening drink. Eventually, I wandered into the Hard Rock Café where I bought an overpriced drink, connected to the WiFi, and searched for something better in town. 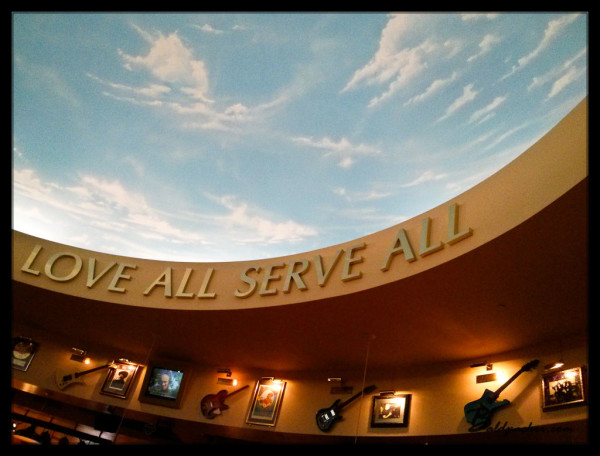 Eventually, I found a highly rated bar called Godfather’s, which I then recalled Bryan, a buddy from Guam I met in Palau had recommended to me. Godfather’s was indeed a great bar for a solo traveler like myself as its bar stools were filled with interesting people up for conversation. Most were Navy vets living on the island and before long the conversation turned to politics, current events, and military. The staff at Godfather’s was great and my bartender was a beautiful, friendly woman proudly sporting a tight red dress – I quickly understood why Godfather’s is so popular among military vets. At one point in the evening I met the owner, a fellow originally from Brooklyn who still had his heavy Brooklyn accent, and it became clear to me where the bar got its name. Godfather’s features a solid beer selection and had live music while I was there so it is definitely a place worth checking out. I ended spending the rest of my Christmas Eve there before walking home for a well-deserved rest.

Overall, I really enjoyed my time in Saipan. My visit was definitely short but the island is also quite small. Although Saipan lacks the beaches that usually draw tourists, it is also a beautiful island with very friendly locals, a storied history, and great scenery.