Ever since my trip to Penafiel to feast on lechazo (baby lamb), I have been eager to visit Segovia to try cochinillo (baby pig). I love that Spanish can plan an entire day around eating and this day was no different as we arranged for a group to meet in Segovia for lunch.

In the morning, Sandra drove Sara, Laura, and I from Valladolid, through Sepúlveda, to the Hoces del Rio Duratón National Park which features the church and monastery of San Frutos (Saint Fructus) as well as large vultures. For being the first week of January, the weather was great and we were treated with beautiful blue skies and sunshine which made the entire area incredibly picturesque. 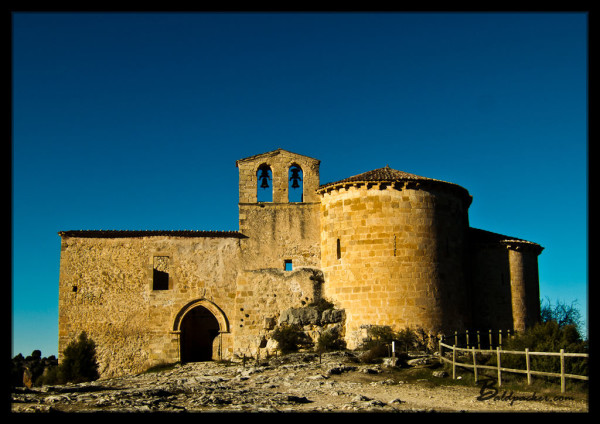 San Frutos was a hermit descendant of Roman patricians who died in 715, after his brother’s Valentin and Engracia were beheaded by the Arabs (all becoming martyrs). The church and monastery are beautifully perched on a cliff within the curve of a meandering river. The ruins are in great condition but it is their location on the narrow stretch of land that makes them so spectacular. We were also lucky to see a number of large vultures both flying and hanging out in the grass, before a throng of other tourists arrived to scare them off. 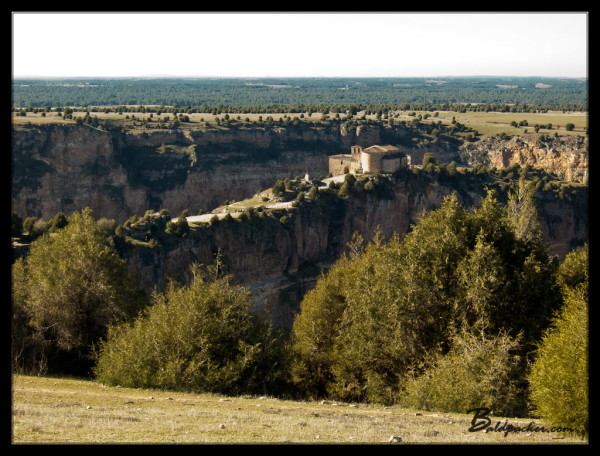 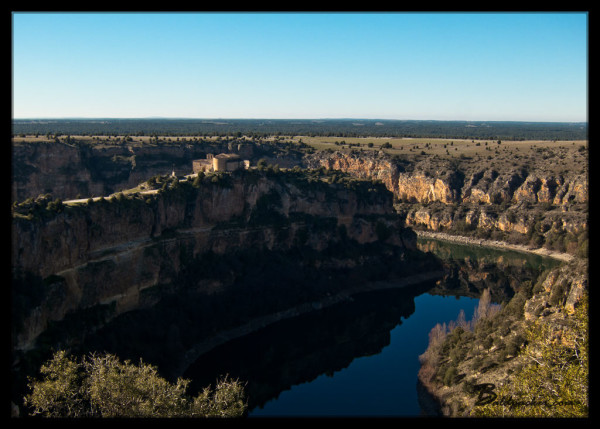 Sandra, Sara, Laura, and I used our beautiful surroundings as an opportunity to have a late breakfast of tuna empanada (a thin pastry with a delicious tuna filling) and cecina (cured horse meat) from Sandra’s village. One of my favourite Spanish sayings is “comer y rascar, todo es empezar” which essentially means that our first snack was just scratching our hunger itch and that our real eating was just beginning (eating and scratching, it’s all about just starting).

From San Frutos, we drove to Segovia where we met Marta and Saulo for cochinillo. Marta and Saulo own a pet store in Valladolid and they were picking up an incredibly cute puppy from a breeder in Madrid for a customer. After meeting the puppy, who I named “Diamante” after the white diamond shaped tuft of fur on its back, we made our way to Taberna Lopez for our cochinillo lunch.

Cochinillo is a suckling pig or a piglet still being fed by its mother’s milk. They’re slaughtered between two and six weeks of age and then roasted whole. Although cochinillo is best known in Spain, it is also still very popular in the Southern US, China, Vietnam, the Philippines, and former Spanish colonies where it is sometimes called lechon de leche.

Taberna Lopez was a wonderful setting for our much anticipated lunch and the staff eagerly told us about our cochinillo options. They told us a cochinillo could feed eight people for 160 Euros and our group of six decided to take on that challenge. We also ordered two delicious bottles of red wine from an area of Spain near where Sandra lived.

The cochinillo was rolled out on a table beautifully roasted and in a Superman pose. Having grown up in Canada and used to seeing meat sold already butchered and wrapped in plastic, I still get a little shock from seeing meat served with the heads or eyes still attached. In many ways I like seeing that it is an animal, rather than simply a cut of meat, as it reminds me of the importance of what I am about to eat. Saulo told me that in some traditional restaurants they will cut the cochinillo with a dinner plate, just to show how perfectly roasted and tender it is, but our waiter used a knife to cut off succulent sections of the piglet for each of us, leaving the head facing away from its body which was about to be consumed. 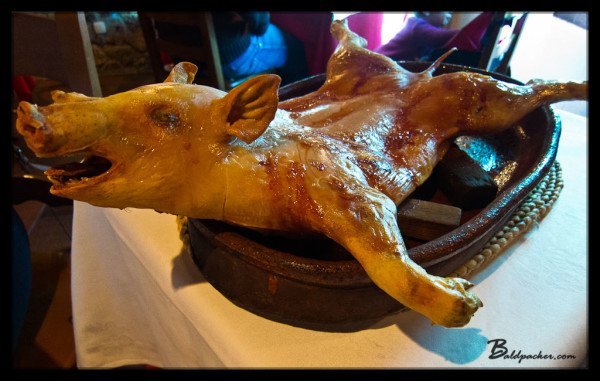 The cochinillo was delicious but I think we were all surprised that it was advertised on the menu as feeding eight people. While we were all full, I don’t think any of us felt like we had feasted so we dug into the head. Spanish use all parts of the pig, including the brain, nose, ears, etc. and thus we did not want anything to go to waste. Our group was nice enough to offer me a crisp ear, which is one of the best parts of the pig, as well as half of the head to dig into. The waiter explained that some of the best meat was in the jaw so I picked it up, broke it, and was rewarded with incredibly tender and delicious meat. The whole experience was a lot of fun and I am happy I finally got to try cochinillo, although we joked they could have let it live another week so we’d have more to eat. I personally prefer the lechazo I enjoyed in Penafiel, but I can certainly see going for cochinillio again in the future to celebrate special occasions. 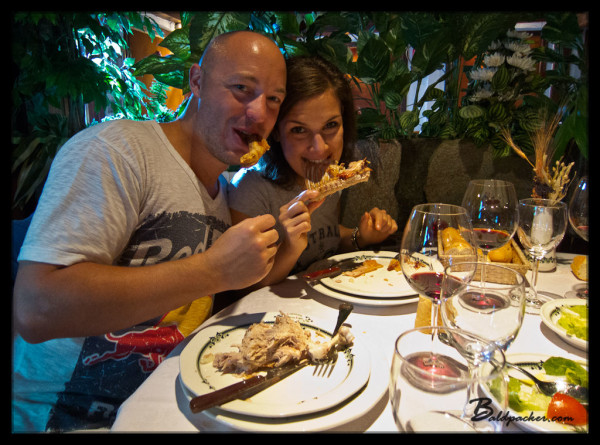 Yes, That is a Pig’s Hoof in my Mouth

After our massive lunch, we went to check on the puppy and then explore Segovia by foot. Segovia’s aqueduct is one of the best preserved ancient Roman monuments in Spain. It is believed to have been built during the 1st century AD to transport water from the Fuente Fria river 14 kilometers to the city. At its tallest, the aqueduct reaches a height of 28.5 meters (over 93 feet), making it a spectacular sight. Thankfully, the World Monuments Fund and UNESCO have implemented a management plan to ensure the beautiful aqueduct is looked after for years to come. Our timing was perfect as the sun began to set and the aqueduct’s arches reflected a beautiful warm glow.

View over Segovia from Segovia Aqueduct 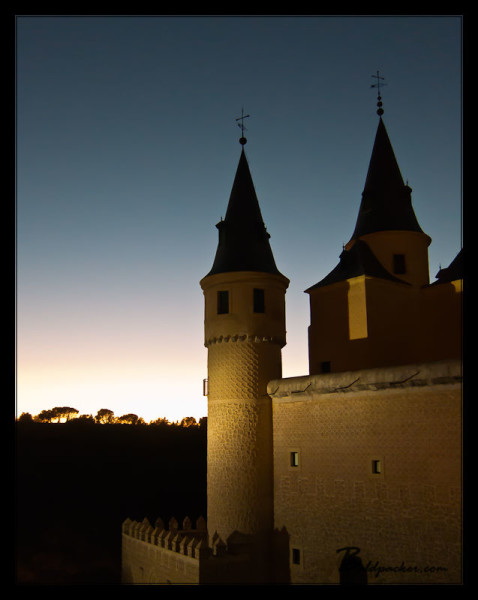 I definitely enjoyed seeing the Alcazar of Segovia up-close but would love to return to see it in daylight from outside the city as well as when it is dusted with snow as it is some of my favourite photographs. Given how tasty the cochinillo was, I don’t think there is any doubt I will return one day!