Belgrade, Serbia is a city that greatly exceeded my expectations. I imagined it being a concrete jungle with cold and unhelpful people given the region’s varied past. Belgrade may not have the romantic architecture of other European capitals, but that is replaced by warm, helpful, caring, and beautiful people complimented by a really nice overall vibe that really surprised me. 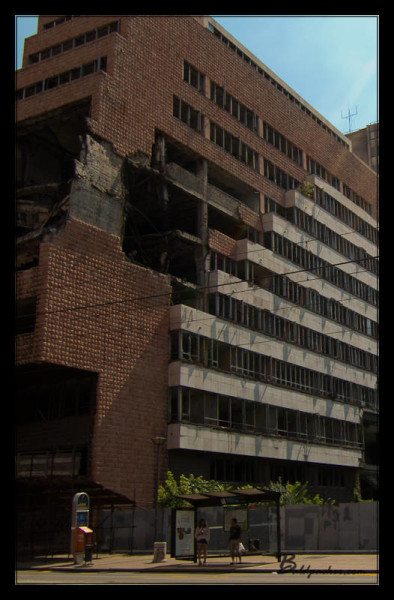 I arrived at the Belgrade airport in a state of exhaustion having slept only a few hours over the preceding days and was expecting to spend most of my first day sleeping at Hostel Madness. Instead, I was greeted at the airport by a lovely young couple who run the hostel (the hostel provides airport pick-ups for 15€) and their positive attitudes helped get me into the travel spirit. On the drive from the airport, I quickly realized that Belgraders love their 80’s music and that Hostel Madness was not named after the party scene that I’d always heard about in Belgrade, but rather the band “Madness”, known for its classic hit “Our House”.

Upon arriving at the hostel, which is essentially a renovated 2 bed / 1 bath apartment, I was quickly invited to breakfast by a group of Australian, Dutch, and Danish backpackers who were then carrying on to do a free walking tour. Despite my original intention to sleep most of the day, I decided that it was worth taking advantage of the beautiful sunshine and joining the group. This ended up being a great decision as Belgrade has a lot to offer and deserves much more time than the two days I had allotted to seeing the city. After a wonderful breakfast and coffee, which cost only 230 dinar (approximately 2€), we joined the free walking tour. Every free walking tour I have done to date has been excellent and this continued to hold true in Belgrade. Even though Belgrade cannot be recognized for its architectural beauty or monuments, it has a very interesting history and culture and this is what the tour focused on. The key thing I learned was that Belgrade is in a very strategic location, having nearby mountains and being at the Y-junction of the Danube and Sava rivers. Subsequently, Belgrade has been subject to 115 wars and was razed to the ground 44 times, explaining why there are so few architecturally significant historical buildings remaining. 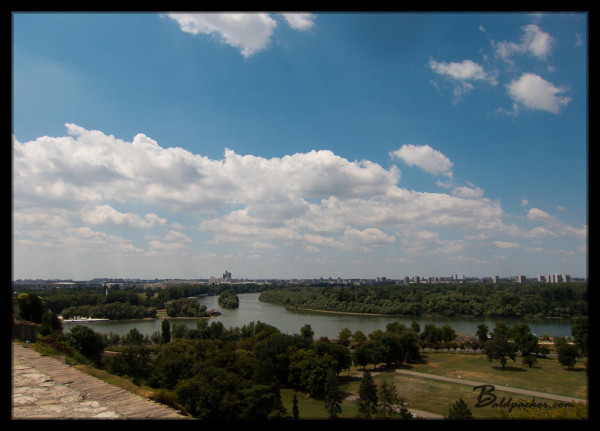 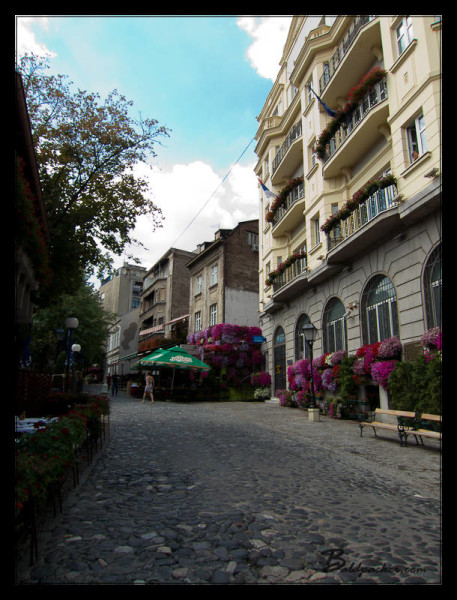 We began the tour in the Republic Square and moved to Skadarska street, a lovely street full of restaurants and cafes with a very Bohemian look and feel. I would suggest this is the most beautiful street I visited in Belgrade and its cultural appeal will certainly lead it to being a tourist hot spot in the future. Local bands play traditional Serbian music at almost every restaurant and bar and the incredibly flavourful and carnivorous local cuisine can be enjoyed cheaply.
street also became my favourite place to have a drink and admire the beautiful women attempting to make it up and down the cobblestone street in excessively high heels and short skirts. While on Skadarska street, our tour guide provided everyone with a sample of Medovača, a honey flavoured rakija most commonly enjoyed by women in the country (due to its sweetness compared to other rakijas). Apparently, rakija was historically drunk before meals, including breakfast, and this morning ritual is still commonly practiced by the older generation. The rakija we sampled was home-made, as are most rakijas, but was diluted to only have an ABV of ~20%, much less potent than the more traditionally distilled rakijas of 40%+. From Skardska street we were taken to Strahinjica Bana street, also known as “Silicone Valley” among locals. The Silicone Valley nickname is due to the ‘enhanced’ appearance of the beautiful women who frequent the bars in the evening. This is the street where young men and women come to show off their cars, flash their cash, and look their best. In the evenings, I enjoyed watching the men cruise down the street in their luxury automobile, double park, and then exit the vehicle with one or more surgically enhanced babes crawling from the passenger seats. Women from the former Yugoslavia are some of the most beautiful in the world, and it is well worth the slightly higher drink costs on Strahinjica Bana for the excellent people watching. Given the massive meal portions and meat, bread, and dairy heavy diets, I cannot fathom how the women are so tall, thin, and sleek (but I also cannot complain!) 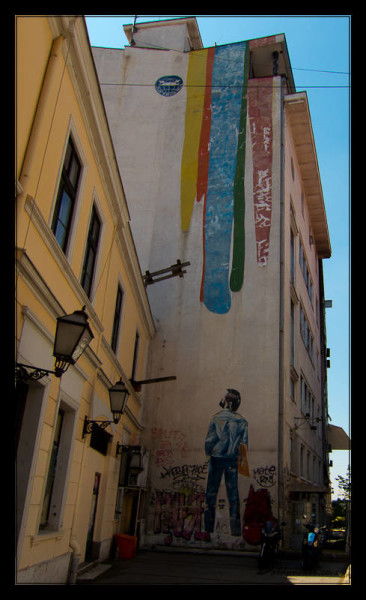 We completed the tour at the Belgrade Castle, a very picturesque part of the city where it’s possible to see the Danube and Sava rivers meet. This is the only area of Belgrade that I would consider to be touristy, as there were many souvenir stands present with some very creative and impressive wares for sale. I came across old Yugoslavian notes on offer, including a 500 billion dinar note, showing the extreme inflation that existed during the break-down of the former Yugoslav. The older woman I purchased the notes from was incredibly sweet and kind, and she spoke very good English considering her age. After my purchase she said “thank you very much Mr. Bill Gates, you very rich man”. I laughed at this but also found it amazing how casually she could joke about these old bills given that the inflation of the time had almost certainly wiped out any wealth or savings she may have had. The theme that continually amazes me in the former Yugoslavia is how incredibly helpful and wonderful the people are given their difficult recent past. 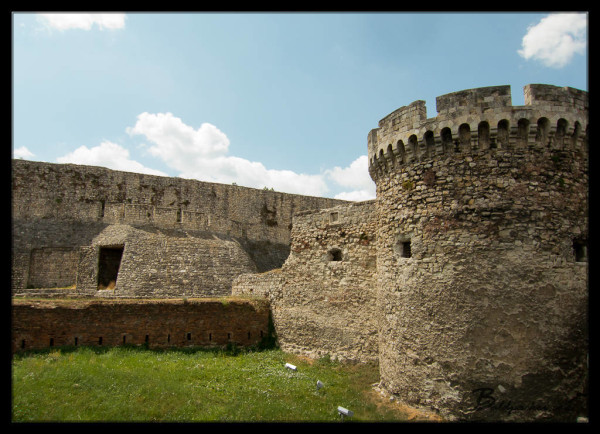 After the walking tour, my hostel mates and I sipped beers and played cards on Knez Mihailova, another happening pedestrian street in Belgrade that is full of restaurants, bars, and cafes. As the afternoon turned to evening, we circled back to Skadarska street for a delicious and filling dinner, followed by more drinks and people watching on Strahinjica Bana (Silicone Valley). 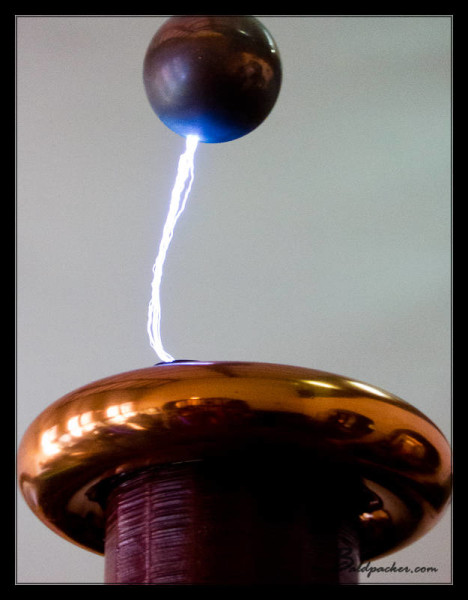 On my second day in Belgrade I wandered the city streets admiring the contrast between the new and old buildings as well as the widespread graffiti. In the afternoon, I joined a Dutch buddy from the hostel, Nathan, and we walked to the Tesla museum. On the way to the museum we also walked past St. Mark’s church, and stopped for a couple of beers at the café/bars that are located throughout the city. The Tesla museum was very interesting as it focused on Nikola Tesla, who was born in Belgrade but emigrated to the US later in life. He was an incredibly brilliant inventor responsible for such inventions as alternating current, fluorescent lights, x-rays, radios, remote controls, electric motors, robotics, lasers, and wireless communications. Given Tesla died in 1943, one can see that many of his ideas and inventions were far ahead of their time but have proven very valuable to today’s society. Tesla’s story is very interesting and although the museum is small, I believe it is worth visiting for anyone interested in science or innovation. The Tesla Museum has many examples of Tesla’s inventions including demonstration pieces that the staff turn on during the tour to help explain his work.

After returning to the hostel, I met a very nice couple from Tunis who live in Paris and went out with them to my favourite spots on Skadarska and Strahinjica Bana streets that evening. They were very friendly and interesting people but also the heaviest chain smokers I have ever met. Drinking and chatting with them was a great way to end my time in Belgrade and prepare for my shuttle to Sarajevo the next morning.