As part of the effort to unify North and South Korea, and to support Kaesong Industrial Park, the Gyeongui railway link was built to connect Seoul, in South Korea, with Kaesong, in North Korea with the hopes for the rail to one day support trains heading further North. To learn about this train project, we stopped at Dorasan Station, which uses the motto: “Not the last station from the South, but the first station towards the North”. The Dorasan stop was the least interesting stop of the tour for me, but it did make me think of how amazing it would be for South Korea to one day be linked to the rest of Asia and Europe through North Korea. On display in the station is a railroad tie signed by former President George W Bush who visited the station with South Korea’s president Kim Dae-jung. 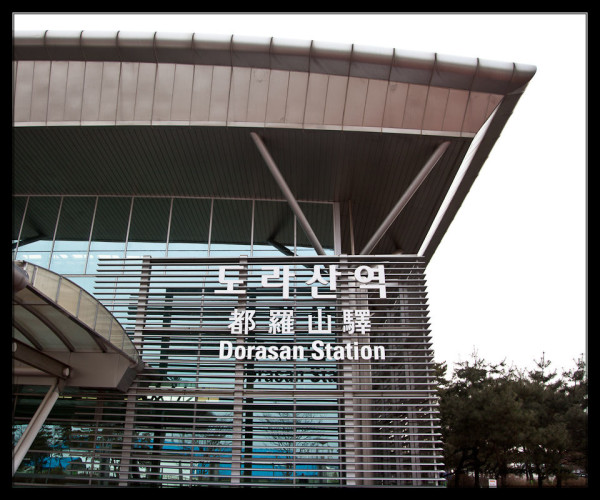 The last stop of the tour was my favourite, the Joint Security Area or JSA for short. We were greeted at Camp Bonifas, the US/South Korean military base standing “In Front of Them All” in the event of an attack, by a US Military Serviceman who led us into a theater where we had to read and sign a waiver. He then put on an excellent presentation one again explaining the history of the Korean War, DMZ, and continued conflicts up to present day. I think the part of the tour I enjoyed most was having the same information explained multiple times in multiple ways. Each time I heard the story I caught a different fact or gained understanding which really brought home the information for me. After the presentation, we were back on to buses, but this time buses operated by the JSA rather than our tour company. 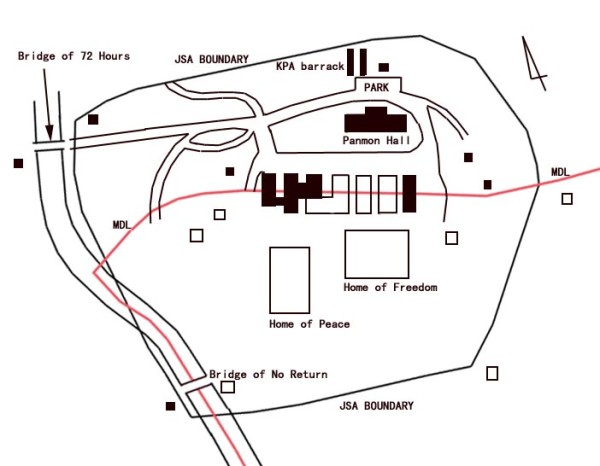 As we drove North towards Conference Row, the military escort explained more about the DMZ and the JSA and the present day situation between North and South Korea. At one point, we passed over a bridge and boundary line trench where the roads were rigged with C4 and the trench was said to be filled with over two million landmines in case the North Koreans tried to come across. I have never seen a structure rigged with C4 before and it was pretty nuts to just drive by it as though it was commonplace.

Eventually we arrived at the Freedom House, which is South Korea’s propaganda palace facing the demarcation line. We were lined up inside and then led out to the conference rooms straddling the border while a team of ROK soldiers stood in intimidating poses facing North Korea’s propaganda palace, Panmungak or Panmun Hall in English. The three blue rooms are referred to as T1-T3 and are used for negotiations between South and North Korean government representatives. We were able to enter the MAC conference room and could walk back and forth between North and South Korea and take photos with the ROK soldiers who looked pretty bad ass in my opinion. 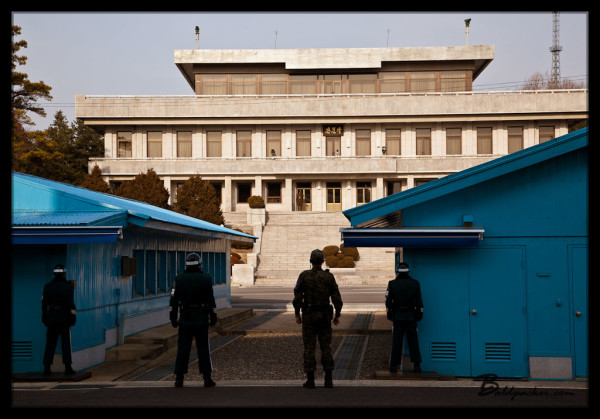 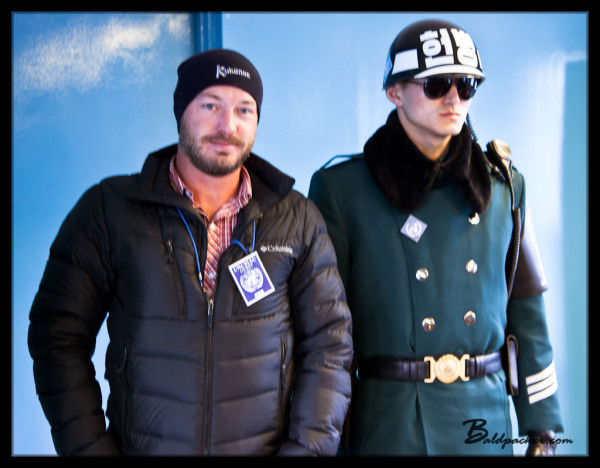 Standing with a South Korean Soldier in North Korea! 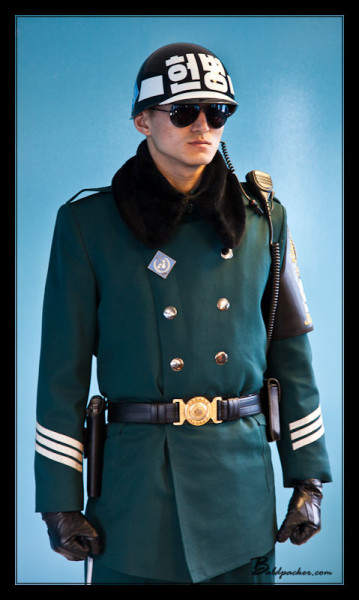 Meanwhile, a sole North Korean soldier paced back and forth out in front of Panmungak chatting into his radio from time to time. It was all a very surreal experience.

After seeing the MAC conference room, we returned to the buses and drove by a landmark indicating it is where a large poplar tree had once stood. This was the scene of one of the most historic incidents since the Armistice Agreement was reached and it is commonly known as the Axe Murder Incident. Basically, when the JSA was originally developed, South and North Koreans could wander freely within the JSA area, construct buildings wherever they pleased, and there was no MDL through that area. As shown in the below diagram, a 100 foot poplar tree blocked the line of sight between United Nations Command (UNC) checkpoint CP#3 and observation post OP#5. 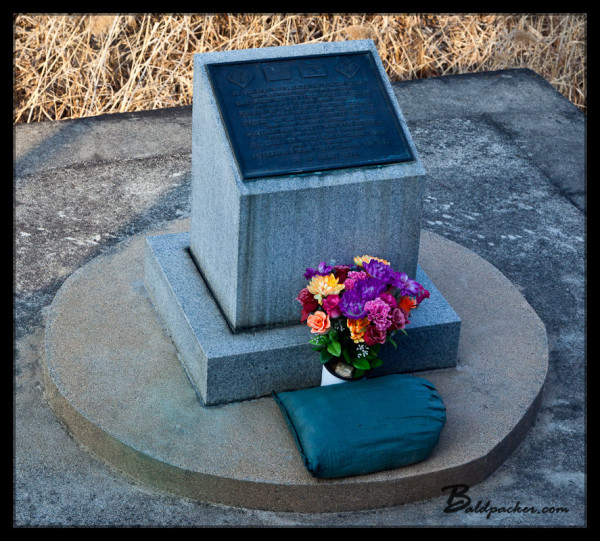 Scene of the Axe Murder Incident

The North Korean Army had often tried to kidnap UNC Personnel at CP#3 and drag them across the “Bridge of No Return” on to North Korea’s side of the MDL. Because of this, CP#3 was known as “The Loneliest Outpost in the World.” In order to improve the line of sight to the guard post, a group of US and ROK soldiers went into the JSA to trim the tree. While trimming the tree, North Korean soldiers confronted the group and it broke out into a fight where Capt. Bonifas and Lt. Barrett were killed by the axes dropped when the fight broke out. There are photos and videos of the incident recorded by officers at OP#5 and CP#3 and there is a clear photo of an axe being thrown at the US and ROK soldiers by the North Korean Army. 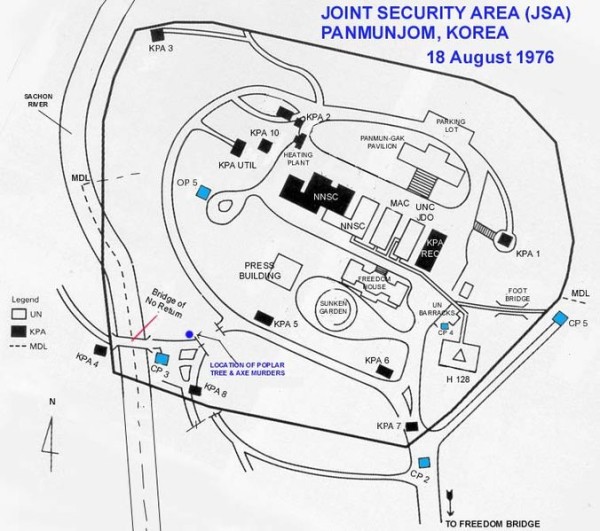 North Korea immediately claimed the attack was America’s fault and tried to use the incident as a reason to dissolve the UNC. America responded by putting its forces in Korea to DEFCON 3 and the UNC decided to cut down the tree, rather than trim it, in an operation called Operation Paul Bunyan. The operation consisted of 23 American and South Korean vehicles driving into the JSA without warning to the North Koreans including two eight man teams of military engineers with chains saws to cut the tree down. Supporting them was a 64 man South Korean special forces team with M16s, M79 grenade launchers, and several of the men with claymore mines strapped to their chests shouting and daring the North Koreans to cross the bridge.

When the tree cutting commenced, 150-200 North Korean troops arrived in buses. At that point, the a US lieutenant relayed their arrival by radio and a company of US infantry circled behind the operation in 20 utility helicopters and 7 Cobra attack helicopters. In the sky, B-52 Stratofortresses, Korean F-5 Freedom Fighters, and F-4 Phantom IIs flew at high altitude.

The aircraft carrier Midway was also station offshore. Additional Air Force, 12,000 troops, 1,800 marines, were also moved into place for ready deployment if required. There was a lot of concern the tree cutting could spark wider conflict and clearly the US was staged and ready to respond. Pretty intense stuff over a poplar tree!!!

After this incident, the JSA was divided into a North and South areas and personnel were no longer allowed to mix and buildings could not be used by parties on the opposing side of the MDL.

The final stop on our tour of the JSA was the Bridge of No Return. After the Korean War, many POWs were given the choice to cross the bridge or stay with their captors. Once making the crossing, they would not be able to return, thus the name. 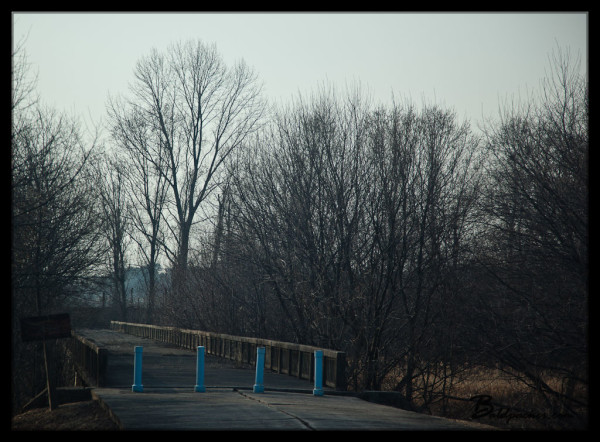 Bridge of No Return 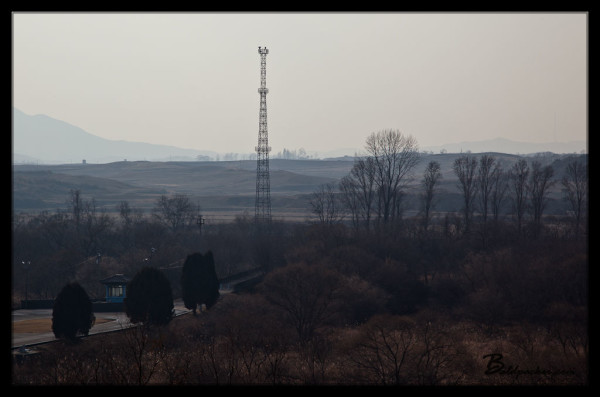 As we headed back towards Camp Bonafis, our military guide told us about Taesong-Dong, South Korea’s “Freedom Village” in the DMZ. There are just over 200 farmers in the village who live and farm under constant military guard. Living in the village has its benefits though, as the South Korean government guarantees the farmers a basic salary of more than US$ 80,000 per year (tax free), provides luxurious accommodation by rural Korean standards, and for the ~30 student school, there are around 25 teachers, ensuring the children get the best education possible. The only way to live in the village is to be born there or for women to marry into it and I believe residents must spend around 240 nights in the village each year to maintain their government benefits.

It was also explained that the DMZ has become a nature reserve over the years. Now, many endangered animals and plant species grow between the heavily fortified fences and guard posts of the area. There are red-crowned cranes, Korean tigers, Amur leopards, Asiatic black bears, and water deer nicknamed “vampire deer” because of their freaky fangs. After learning about so much war, death, family division, and political crises, it was nice to conclude the tour of the DMZ with a positive development.

After reloading on to the USO/Koridoor tour bus we went for a quick Korean buffet style dinner and then returned to Seoul. The DMZ tour was definitely one of the most educational, interesting, and emotional tours I have ever done. I both highly recommend the tour and would going to the JSA, if possible, but believe the Dora Observatory and Third Tunnel are quite worthwhile if that is all you are able to arrange. Now, to figure out how to get on a tour to the North Korean side of the JSA…