I have always heard about Bilbao, Spain, because it is home to the beautiful Guggenheim museum. When Sara and I began exploring options for a short trip from her hometown of Valladolid, we decided a visit to Basque country was in order. 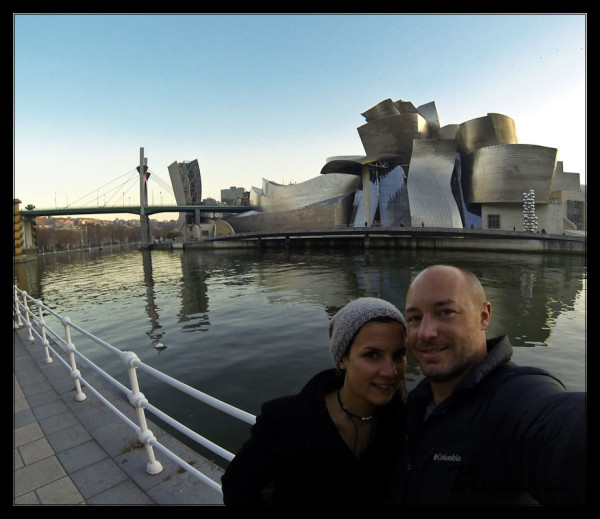 Sara and I at the Guggenheim, Bilbao

In planning our trip we decided we would try to visit both Bilbao and San Sebastian. Interestingly, whenever we discussed our plan with other Spaniards, they all spoke poorly of Bilbao (and the Guggenheim) and fondly of San Sebastian. Perhaps it was because my expectations were so greatly lowered but I really enjoyed our short visit to the city. While Bilbao is a large industrial city, there are enough museums, tourist sites, and pintxos bars (Basque name for Spanish tapas) to easily fill an enjoyable weekend.

As an added benefit, the scenery from the train during our journey to northern Spain was spectacular. The Spanish provinces of Palencia, Burgos, and Vizcaya offer spectacular scenery including rocky mountains far more beautiful than I realized existed in Spain. Upon arrival in Bilbao, we were also treated to a spectacular stained glass window which gave us a great first impression of the city. 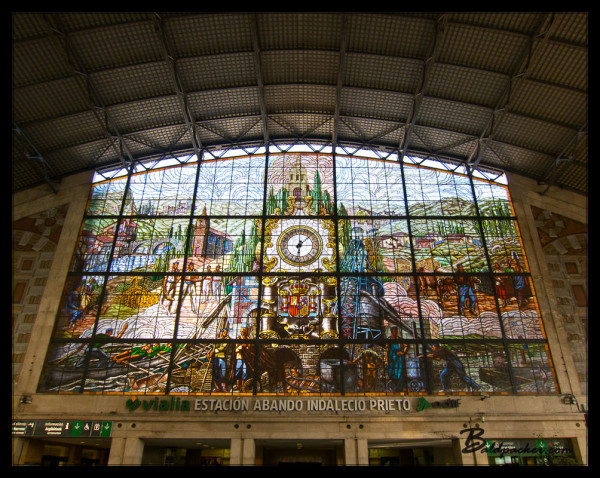 For accommodation, we stayed at AliciaZzz Bed and Breakfast Bilbao. According to the B&B: “The idea of AliciaZzz is to integrate design, newness and comfort in a building more than 100 years old. It is inspired in “Alice in Wonderland”, situating Wonderland in the Basque Country.”

AliciaZzz B&B is located in the old town and was a convenient place to access the pinxtos bars and other sights of Bilbao from. The one strange thing is that there is no door on the toilet / shower area so you definitely want to know your travel partner well if you plan to stay there! 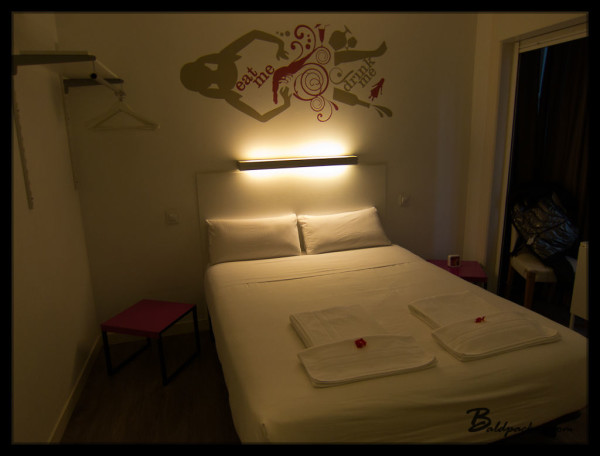 Since we only had two days (one night) in Bilbao, we immediately set out to explore the city. We discovered the Museo de Bellas Artes (Museum of Fine Arts) was free on Wednesdays (regularly €6.00) so, since it was Wednesday, we wanted to visit it first. Bilbao is filled with neat art exhibits all over the city and on the way to the Museum we saw this cool street light installation. 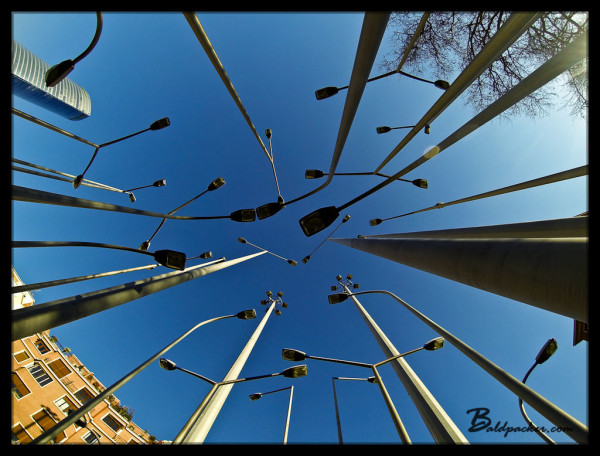 Bilbao’s Fine Arts Museum hosts a permanent collection of paintings, sculptures, and other art dating from the 13th century to the present. A lot of the paintings are from Spanish and Flemish schools as well as pieces by Basque artists. While impressive, at this time I am not overly interested in paintings from the Middle Ages or that are of a religious context and thus the permanent exhibition did not really appeal to me. Luckily, during our visit, the Bilbao Fine Arts Museum had a temporary exhibition of spectacular Hyperrealism paintings from 1967-2013. The gallery was organized to show works from Hyperrealist painters in chronological order to show how the techniques evolved and developed. It was all very impressive and is one of the best art museum exhibits I have ever seen. Given that our admission was free I was extremely impressed with the gallery and happy we had made our trip to Bilbao.

By the time we left Bilbao’s Fine Arts Museum it was late afternoon and the sun was beginning to set. We had considered walking to the summit of Artxanda Mountain during our visit to Bilbao but given our time constraints we decided to take the Artxanda Funicular to the top instead. On the way to the Funicular, we walked past the Guggenheim Museum to see how its appearance changed as the low afternoon sun reflected off its many angled walls. If I had more time in Bilbao I would love to see the Guggenheim from all angles at all hours of the day, especially sunrise and sunset. The building’s architecture is simply stunning.

On the way to the funicular we stopped in a local Carniceria (meat shop) to buy chorizo and empanada to snack on at the top. The Artxanda Funicular was definitely a worthwhile experience as it was first opened in 1915, making it 100 years old at the time of our visit. It also saved us from walking 230 meters of vertical and offered spectacular views after a journey time of only three minutes.

The summit of Mount Artxanda features a nice little park, several art installations, and a sports complex. Sara and I found a bench to watch the sunset from while we enjoyed our snacks. The sunset over Bilbao was spectacular and well worth the effort. 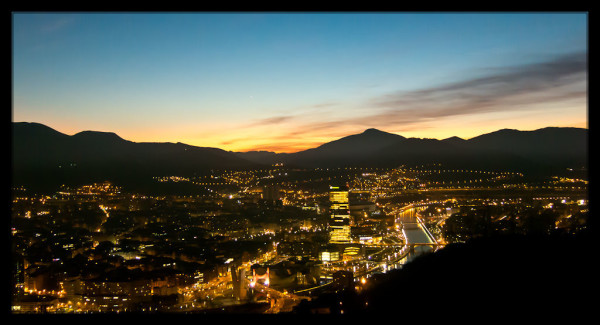 Sunset over Bilbao from Mount Artxanda

That evening, we went to a couple bars for pintxos and drinks. Pintxos (pronounced “pinchos”) are typically small slices of bread with various toppings, often affixed with a toothpick. In fact, pintxo means “spike”, so the toothpick is the spike that the name pinxto is derived from. Pintxos are usually served on plates spread out across the bar, though some require heating before being eaten. The way pinxtos are served in Basque Country generally differs from how they’re served elsewhere in Spain as you can usually just serve yourself and settle your tab at the end of your meal. It is sort of like an honest system, though the bartenders also tend to watch and track what you’re having. To help in counting your tally, you can often just hold on to the toothpicks with the different sizes or styles sometimes meaning different prices. Each place is different but since Bilbao receives a lot of tourism, the bartenders can help guide you.

The next day, before our afternoon bus to San Sebastian, we made our way to Bilbao’s star attraction:the Guggenheim Museum. The Guggenheim Museum was designed by Frank Gehry and is a spectacular building covered in titanium scales that were apparently inspired by fish scales. 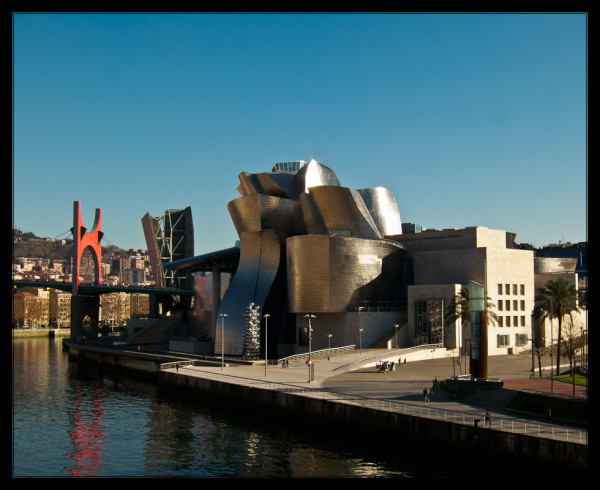 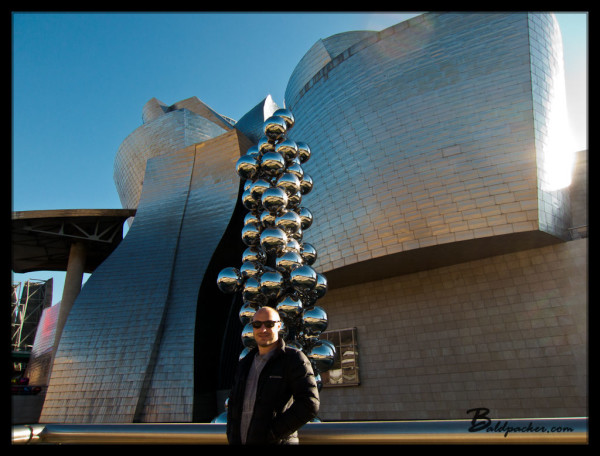 Admission was a steep €13 for Adults (€7.50 for students under 26) but was worth the cost in my opinion. Many people had commented to me that they were not overly impressed with the museum but I was pleasantly surprised. Perhaps it was because I entered the museum with low expectations but I really enjoyed the contemporary artwork and large installations on display in such a massive and iconic building. The price of admission also included an audio guide that explained the artwork, both inside and outside the building, which gave some extra context to the more abstract pieces. The highlights of the museum for me were primarily the large installations which are not usually displayed in museums due to their size, but also seeing famous paintings by Andy Warhol, Pablo Picasso, and Jackson Pollock in person. 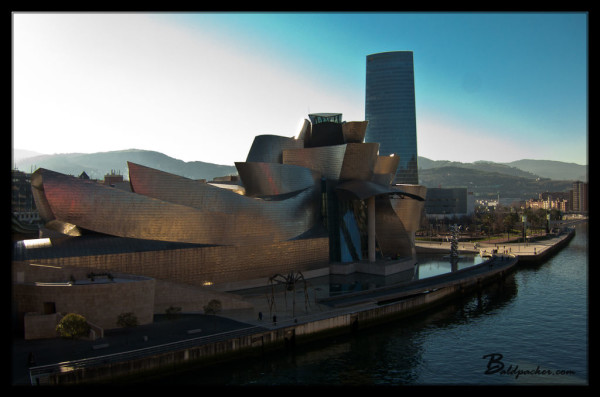 If you’re on a tight budget, just walking around and exploring the outside of the Guggenheim is worth the effort. There are several beautiful sculptures and installations outside the Guggenheim as well as around Bilbao. 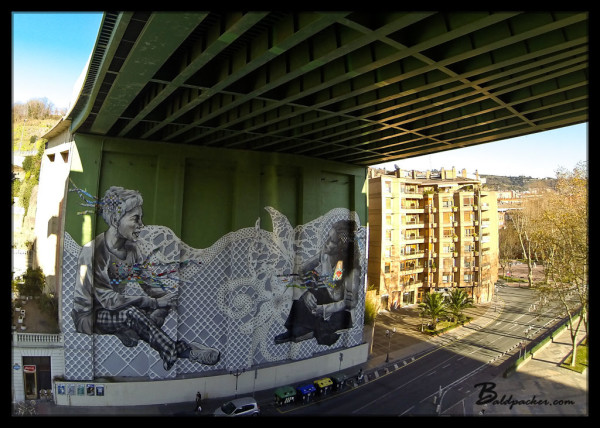 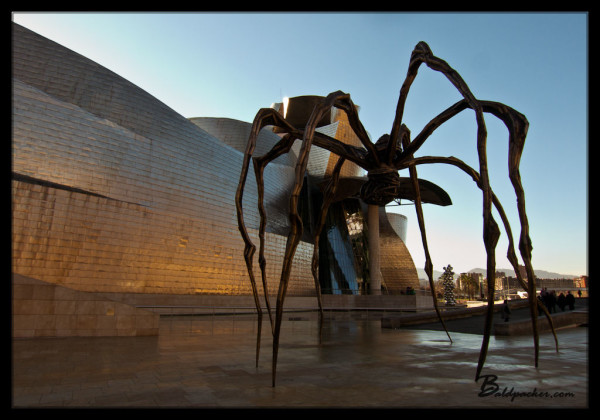 Overall, I really enjoyed our two days in Bilbao. We managed to pack a lot in our short itinerary and I was left feeling artistically inspired by our efforts. I will not be in a rush to return to Bilbao any time soon but it was definitely a city worth experiencing once in my lifetime.

← Traveling to Africa Without Leaving the EU: Melilla
Coppersmith’s Catwalk in Nis, Serbia →