I first visited Valencia in 2007 during the America’s Cup boat races. Given that I was a young backpacker who was traveling with friends at the time, that trip was more focused on the party scene Valencia offers than its amazing architecture, culture, and food. Therefore, during my second visit to Valencia in 2013, I planned to experience more of the city’s tourist attractions and embrace the Valencian lifestyle as best I could. 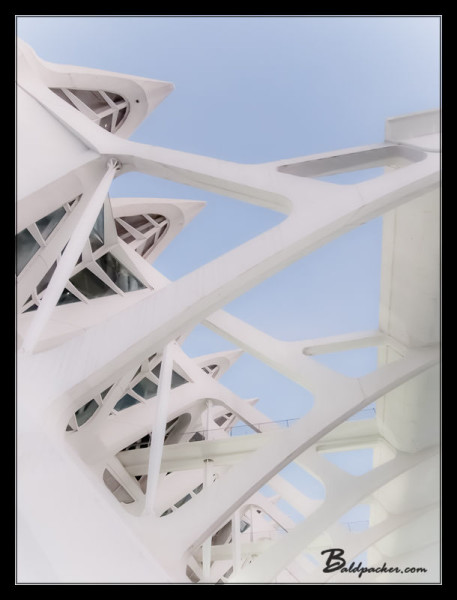 To get to Valencia from Madrid, we decided to take an express train. From the Madrid airport to Atocha train station I took a yellow express bus which cost 5€ and took approximately 40 minutes. Sara was waiting for me at Atocha and had already purchased tickets for the express train to Valencia. Spanish trains are generally wonderful with clean and comfortable cars and fast journey times, especially on the express services. Unfortunately, this excellent service often comes at a cost as train travel is rarely cheap in Spain, although sometimes there are discounts available by booking in advance or taking advantage of other offers. After traveling at speeds of over 200km per hour for most of the way, we made it from Madrid to Valencia in only two hours. Upon arrival, Sara called her brother Javier who lives in Valencia with his girlfriend Marta and we made our way to their apartment.

In true Spanish fashion, Javier had prepared a wonderful tortilla (thick egg and potato omelette) for us to enjoy upon arrival. After the delicious dinner it was time to get some rest given I’d had a long day of plane, bus, and train rides.

The next day, we all went into Valencia’s old town for lunch. Sara and Javier showed me the many buildings in the old town and we found a place for lunch where I tried Valencian paella. Paella originated in the mid-19th century on a coastal lagoon in Valencia. While there are many variations of the dish throughout Spain, Valencian paella is the original. The flavourful dish traditionally contains white rice, green vegetables, chicken and rabbit meat, land snails and butterbeans, all cooked in olive oil and seasoned with rosemary, saffron and sweet paprika. In many restaurants in Valencia the chefs will bring the paellera (cooking dish) right to the table so you can eat straight from the dish in traditional style, but my paella was simply plated.

Lunch in Spain is traditionally the largest meal of the day and there was no better way to digest it than to go walking through Valencia’s main city park which was conveniently built in the old Tùria river bed. The beautiful thing about having a river bed for a park is that it winds its way all through Valencia and provides a wonderful place for recreational activities and art displays.

As the sun set, we walked back to Javier and Marta’s apartment for yet another amazing meal for dinner along with a couple of beers. In true Spanish fashion, we then set out to the bars around midnight. Mixed drinks in Spain are not necessarily as cheap as I had thought as we were paying 5-8€ for each highball, but the drinks are strong and free-poured making them relatively inexpensive compared to other cities internationally. The thing I love most about Spanish bars is the atmosphere as the music is always played at a level that still allows for socializing and the interior designs are usually unique and fun. At 4am, the bar we were at closed which meant heading to an after-hours club that would stay open until the early hours of the morning. We ended up at what I would call a Spanish Classic Rock bar, and they played songs that were the Spanish equivalent to Guns N’ Roses, Green Day, Aerosmith, and the Rolling Stones. Although I did not understand the lyrics, the guitar riffs and music was excellent and I enjoyed seeing Sara sing along to hits from her youth. By 6am, we all began slowing down and walked back to the apartment for a late sleep-in, but I could tell that many others would still be dancing after the sun came up. The Spanish definitely know how to have a good time!

When we finally woke up and had lunch it was already mid-afternoon and Sara and I had not yet explored the City of Arts and Science, a multi-plex of beautifully designed buildings in Valencia. Although we were within walking distance of the area we decided to take advantage of Valencia’s wonderful public bike system. The city provides bike racks around the city where users can borrow bikes, commute, and leave them in the next available bike rack. Luckily, Javier and Marta had cards for the bike system so we were able to quickly borrow the bikes and get to the Science Museum in time to spend a couple of hour looking arounds. There are numerous ticket options and Sara and I chose a combination Science Museum / Hemisfèric ticket for 12.60 € each. The Hemisfèric is a theater with a round 180° screen that plays movies all around you. As we wanted to maximize our time visiting the Science museum, we chose an 8pm film which would give us an hour to explore the Arts and Science complex after the 7pm museum closing. 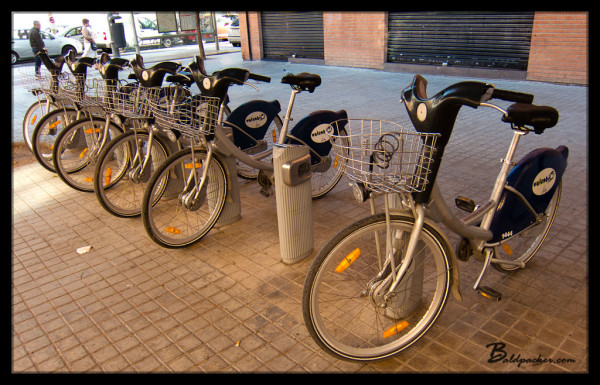 The Science Museum was a lot of fun as many of the displays were interactive and interesting. The museum is also very large, and even with 2-3 hours to explore Sara and I were unable to explore all of the exhibits. I especially enjoyed the interactive exhibits, many of which creatively demonstrated basic physics, and a health and body exhibit that had measurement devices for strength, foot size, stability, etc. At 7pm, the museum staff began forcing us out of the building, but the timing was perfect as the buildings of the City of Arts and Science were bathed in beautiful light from the setting sun. I would highly recommend watching the sunset in the area as the architecture appears to change greatly as the lighting conditions vary. 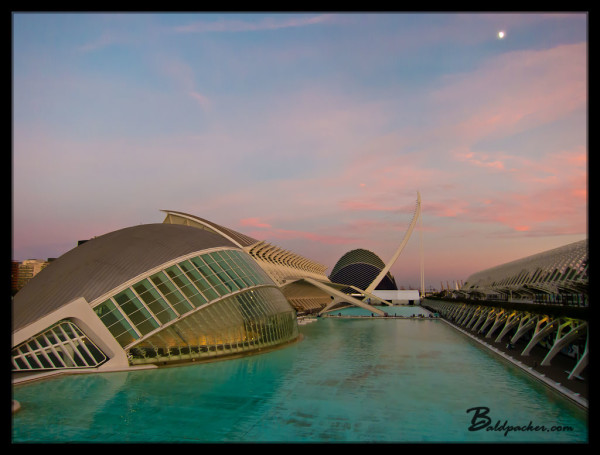 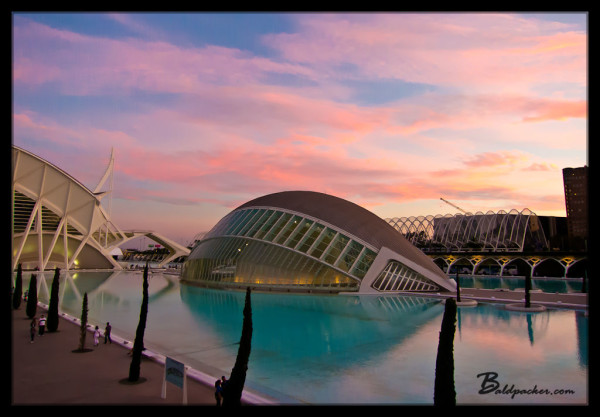 Outside the Science Museum, Sara noticed a stand selling horchata, a drink originally from Valencia that is made from tigernuts. Although I was skeptical about the drink since it resembled flavoured soy milk, when Sara had me try it I was delightfully surprised. The horchata was served cold and was both sweet and refreshing in the warm Valencia weather. Wishing I had purchased a horchata for myself, Sara and I wandered the ‘city’ taking photos of the beautiful architecture and waiting for our film to begin. I have always been very impressed by Spain’s historic architectural designs, but Valencia proves that the Spanish are just as successful at constructing unique modern buildings. Each building making up the City of Arts and Science is unique and aesthetically pleasing, making it a beautiful area to walk around and explore. 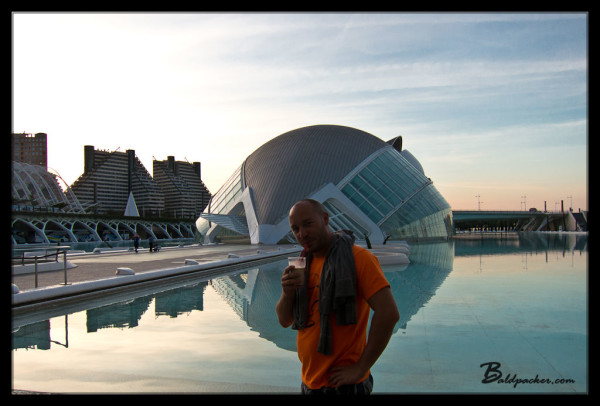 Enjoying a Horchata in the City of Arts and Science 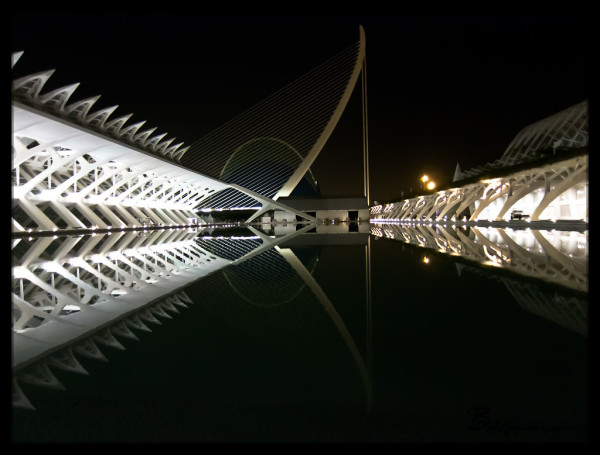 At 8pm our movie in the Hemisfèric began. Although I was concerned my Spanish skills were inadequate to understand the movie, luckily everyone was provided with multi-lingual headsets which allowed me to listen to the film in English. The film was called “The Last Reef” and was a pretty depressing account about how the world’s reefs are being destroyed. The video within the film was excellent and made me eager to go diving again as soon as I can. After the movie was finished, the sun had set and the City of Arts and Science was beautifully lit making it a perfect opportunity for more photographs.

Sara called her brother and we decided to meet for tapas near city center given that it was Sara and my last night in Valencia. Once again, Sara and I borrowed bikes from the public racks and rode along the river park into town where we met Javier and Marta. I love Spanish tapas as it creates a social meal full of many flavourful and unique dishes.  After dinner, we walked back to Javier and Marta’s place, but not before stopping for an ice cream for dessert. The previous day, Sara had showed me an ice cream stand that had every flavour of ice cream you can imagine including olive, pumpkin, smoked salmon, cod fish, and my personnel choice of Red Bull. Sara was underwhelmed by her pumpkin ice cream, but I thoroughly enjoyed my Red Bull flavour as it tasted just like you would expect it would.

After a wonderful sleep and a quick farewell to Javier and Marta, we set off for Valladolid, where Sara had to work in the evening. I thoroughly enjoyed Valencia and believe it is a wonderful city to both live and travel. I hope to return one day soon to further explore the City of Arts and Science, including the famous Oceanografic aquarium, and also see some of the nearby beaches.