After finally getting some rest after what had been an action packed and restless 48 hours, I was ready to set out on the town with Sarah. Luckily, Sarah was able to take Sunday off of work and so we headed to a coffee shop called “Joe the Art of Coffee” for another pour-over. It was a delicious cup of coffee and I was convinced that I need to buy a pour-over cone once I settle down somewhere.  Day 1 had completely changed my mind about New York and I was really starting to see the appeal to the big city. In many ways, it felt smaller and more personable than my home town of Calgary. I think this is largely due to the fact that New York is such a great walking city. My feelings of New York can pretty much be summed up by this advertisement: 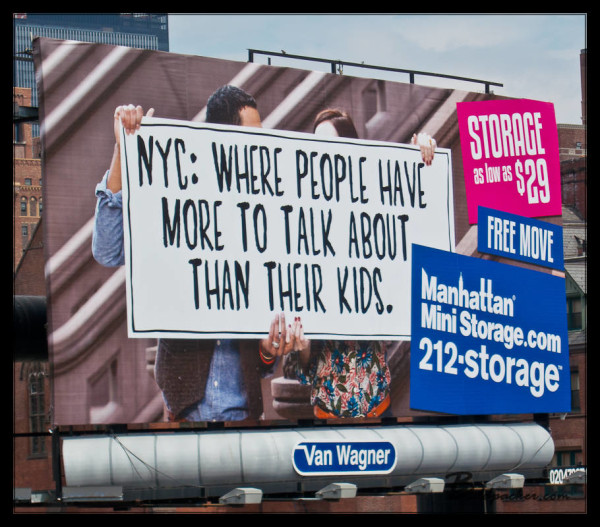 Sarah called up her friend Ian from work to see if he wanted to come to Brooklyn with us to try a popular restaurant called ‘Egg’. We decided on a time and place to meet and Sarah took me through the Chelsea Market on the way there. The Market was a really neat spot with all sorts of delicious looking sea food restaurants and bakeries. I didn’t realize it before, but there is a huge cupcake market in New York. There were amazing cupcake bakeries everywhere I looked and I even heard about ‘cup crawls’ occurring in the city, which I assume is popular amongst the pregnant women who can’t imbibe. After meeting up with Ian, another Canadian lawyer working at the same firm as Sarah, we boarded the Subway to Brooklyn.

Brooklyn was an interesting place to say the least. The Egg restaurant is in Williamsburg, which appeared to be the center of the Hipster Universe. I’ve never seen such quantities of plaid, skinny jeans, and thick rimmed glasses in my life.  It was definitely a great place to people watch, a lucky coincidence since there was a long waiting list at Egg Restaurant. In fact, Sarah had read an online review that said ‘if you don’t pass out from hunger waiting to get in, you’re in for a real treat’. We put our names on the list and then walked around the Williamsburg area, surveying the goods for sale from the various thrift shops and sidewalk vendors. We timed our return to the restaurant perfectly and promptly received our table for 3. I ordered a duck sandwich and a Brooklyn Brown Ale, both of which were delicious. The atmosphere of the restaurant was quite bleak and the best way I can sum it up is to use the restaurant’s namesake, Egg. The walls were all white, with no artwork, and the tables were covered with white paper table coverings. The table coverings actually led to some quality entertainment while we waited for our food as we had a ‘Hipster Drawing Competition’ and did our best to draw some of the unique figures sitting at neighbouring tables. After lunch, the sun was still shining so we grabbed a table on the patio of a pub for some German Hefeweissen beers!

Sarah was able to get us reservations at a bar called “Please Don’t Tell” – a highly sought after cocktail lounge that is supposed to be an exclusive secret, that everyone knows about anyway. The lounge only takes reservation for the same day, and only begins taking reservations at 3pm sharp. We were all very stoked to have the reservations, but were also enjoying the Hefeweissens and hipster watching too much to want to head back to Manhattan and get changed into better clothes. We eventually made it back to Manhattan, and despite our best efforts to quickly get ready, by the time we arrived at Please Don’t Tell we were 25 minutes late for our reservation. Damn. The cool thing about ‘Please Don’t Tell’ is that you enter through a secret passage behind a phone booth that is inside of a hot dog joint called Criff Dogs. We made it to the hot dog joint and Sarah went into the phone booth to dial the phone to speak to the hostess, but when the secret door into the lounge opened, we were rudely told that we were late and that they’d given away our table. Too bad. We were still in the mood for going out though, despite it being a Sunday night, so we found a patio at an Italian bar/eatery and had pizza and beers. It was at this point Sarah and Ian decided they better expose me to a legendary bar called Cafe Wha?

Cafe Wha? is a really neat music lounge in Greenwich Village. It’s a small, intimate place, but the acoustics are quite good despite the size and the live band is fantastic. Cafe Wha? has been around since the 1950s and has hosted talents such as Jimi Hendrix, Bob Dylan, Bill Cosby, and Bruce Springsteen. We ordered a bucket of beers and rocked out with the fantastic band until Sarah and Ian realized they had to work the next day and it was probably a good time to catch a taxi home.

Since Sarah was working, I decided to catch up on sleep and got a late start to the day. Once I was finally ready to move I decided I’d check out the South of Manhattan, including the Financial District. Stock trading is a main hobby of mine and it was great seeing the New York Stock Exchange and other well-known finance buildings. 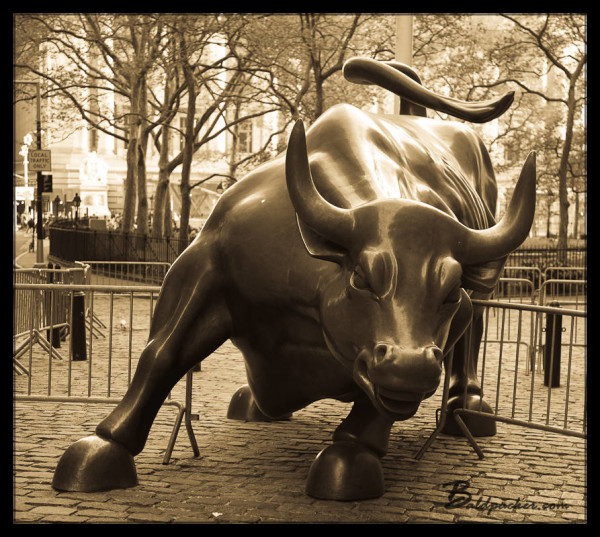 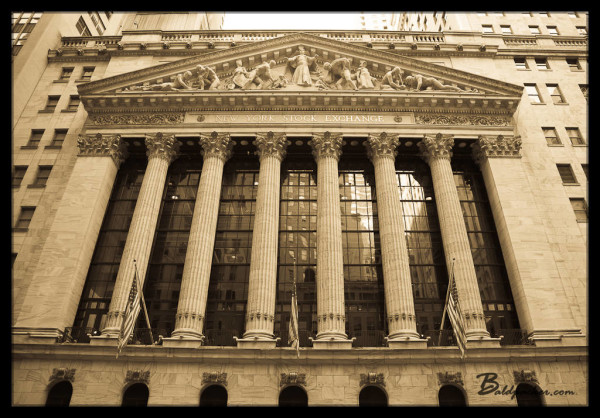 After seeing as much as I could in the Financial District, I walked towards the free ferry to Staten Island. I passed by the Manhattan Helipad on the way, and it was fantastic to see the .01% flying in and out on their helicopter taxis. It sure must be nice to commute in NYC without any traffic! 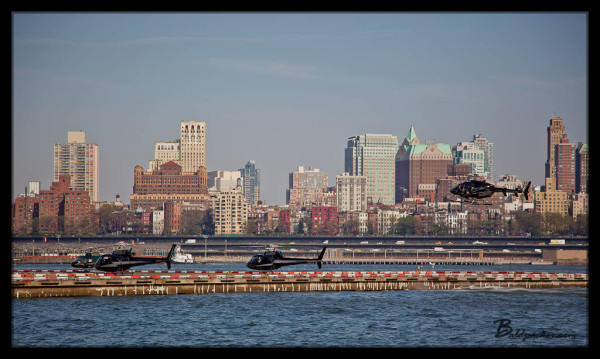 Once on the Staten Island Ferry, I was treated to fantastic views of the New York skyline as well as the Statue of Liberty. I had heard that there was not much to do or see on Staten Island itself, so once I arrived I just walked through the terminal and hopped back on to the same boat to return. It was a beautiful day and I thoroughly enjoyed the views each way. It’s an excellent way to see the Statue of Liberty and Manhattan skyline, and for free no less! 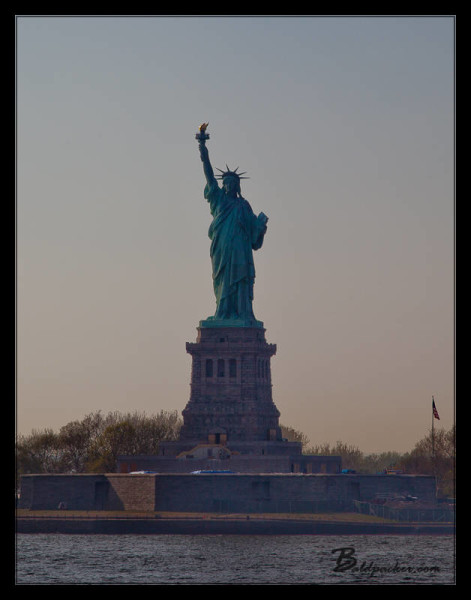 After returning, I decided it may be fun to walk the 7 kilometers back to Sarah’s place in West Chelsea. I’m very happy I decided to try walking as there is a beautiful pathway along the water which is lined with basketball courts, parks, gardens, and tennis courts. Fantastic! I loved seeing so many New Yorkers out exercising and socializing in the parks and making the most of the beautiful weather. I was also treated to a beautiful sunset over New Jersey, bringing the day to a glorious close. 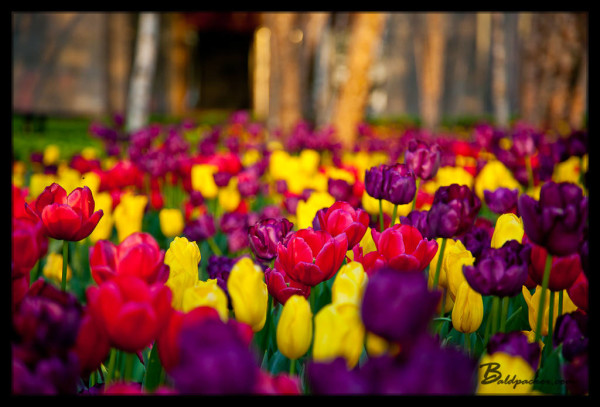