My fourth day in New York began nice and slowly, just how I like it when I’m on holiday. In the afternoon I made my way to the American Museum of Natural History in the afternoon. I was really looking forward to seeing the museum, but was rather disappointed overall. The entrance fee was $19, which is fair considering all of the Exhibits, but it wasn’t really worth it for me. I do think the museum would be interesting for most people, even though many of the displays are quite old and dated, but it failed to raise my interest much. Walking through the 45 Museum Halls made me realize how lucky I’ve been to have traveled so much and it reinforced how many amazing things I’ve seen and experienced over the years.  For example, there is a very impressive Africa display, with many of the famous African mammals stuffed and on display. I’ve been lucky enough to see those same animals in the wild, making that exhibition hall quite tame. The same applied to many of the cultural exhibits, where I’ve been lucky enough to see the ruins, artifacts, and traditional cultures in person. I did, however, thoroughly enjoy the Earth Science displays wherein they explained geothermal and seismic events and had numerous mineral samples on display. The dinosaur exhibition was also quite neat, but given that many of the fossils came from my home province of Alberta, and that the fantastic Royal Tyrrell Museum is only 1.5 hours away from my hometown of Calgary, the exhibit didn’t blow me away as much as others wandering the halls. In the end, it’s a great museum, but better suited for those who do not have the opportunity to travel the world and see things for themselves. I would have loved to see the Museum of National History as a child though, as it would have certainly been both inspirational and educational at that age. 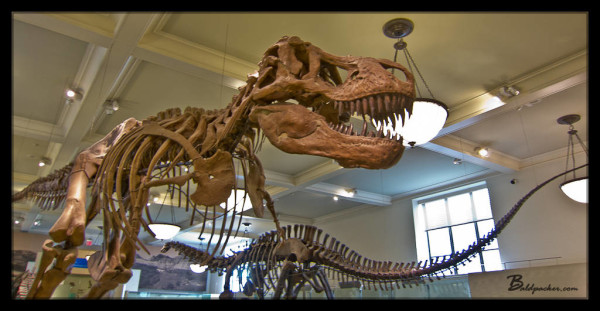 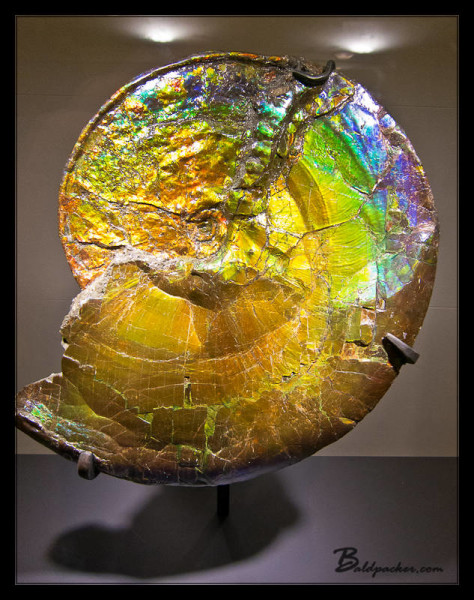 After exploring the museum, I went to Central Park to enjoy the fantastic weather. I also made plans with Michelle, an aspiring actress I had met in Langkawi, Malaysia. She was able to meet up with me later in the afternoon, along with one of her friends, so we all bought lunch and ate in the Park. I thoroughly enjoyed hearing the girls talk about the New York show business and they taught me a lot about how the New York entertainment business works. Unfortunately, I didn’t make plans to see a show while in New York, but I’ve promised Michelle that I will go back to New York to see her shows when she makes it on Broadway! As the sun was dropping on the park, we wandered into Time Square and had a couple glasses of wine before the girls had to race off to plans they had that evening.

By this time, it was starting to get dark and so I decided to walk the High Line before meeting up with Sarah for dinner. The High Line park is one of my favourite parts of New York. It is a 1 mile park built on a section of the New York Central Railroad spur called the West Side Line. The spur was built in 1929 and opened to train traffic in 1934. In 1980, three carloads of frozen turkeys became the last ever train to pass over the line and the spur was left to deteriorate. After nearly 20 years of sitting unused and abandoned, a non-profit group called ‘Friends of the High Line’ was formed and they succeeded in gaining $50 million from the New York City government in 2004 for construction of the park. The first section was opened in June of 2009, with the second section opening in June 2011. I truly enjoyed the park and thought it was a very cool, clean, artistic, and modern idea. The park was receiving a lot of use while I was there and I thoroughly enjoyed watching people sit out reading books, cuddling with their dates, or enjoying one of the many artistic displays or architecturally pleasing buildings along the path. It is certainly one of the most unique and useful urban park features I have seen on my travels. 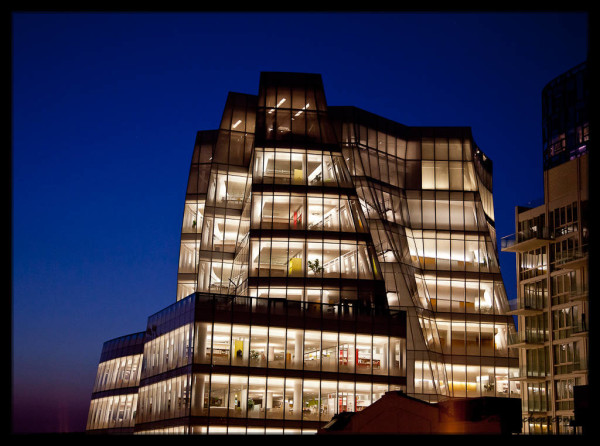 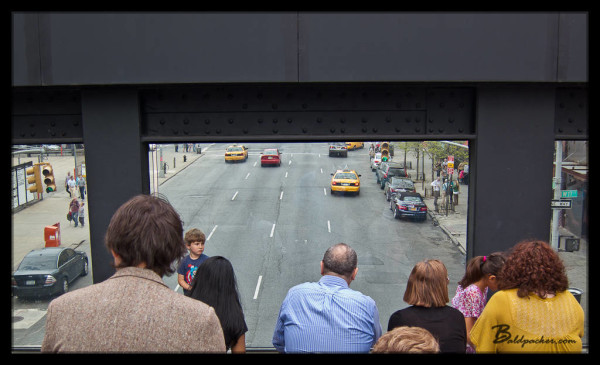 New York Traffic from the Highline

After a nice dinner with Sarah, at an Italian pizza place called Ovest Pizzoteca, it was time to rest up for my last day in New York city.

Upon waking in the morning, I realized it was crazy to be in New York during baseball season and not see a Yankees’ game. I logged on to their website and was able to buy some cheap nosebleed seats for $20. Sarah had to work late, so I invited Michelle along and picked up two tickets. I had a much earlier start on my last day in town than I had on Day 3 or 4, and was able to seek out a delicious pour-over coffee at Joe (formally called Joe the Art of Coffee), an amazing coffee brewing method that takes time and is therefore only available in later hours of the day. The pour-over provided the boost I needed to skip the Subway, enjoy the weather, and walk to the USS Intrepid Sea-Air-Space Museum. By the time I arrived at the Museum it was already noon, so I snuck into a nearby pub for a corned-beef Sandwich and a pint of Guinness. The pub, whose name escapes me, was actually quite well connected to the USS Intrepid and was the perfect way to grab lunch and prepare for my military education. The walls of the restaurant featured photos of the Intrepid from its varied past and memorabilia from the ship’s crew. After filling my gullet, I walked to the museum and paid the $22 admission. I climbed straight to the deck of the carrier and was treated to the numerous historical aircraft on display. I am not a huge military history buff, but I had certainly seen and heard stories about many of the aircraft being presented and really enjoyed viewing them in person.

The USS Intrepid was one of 24 Essex-class aircraft carriers built during World War II. The ship was commissioned in August 1943 and participated in numerous battles over the years. In the 1950s, the ship was recommissioned as an attack carrier, and later as an antisubmarine carrier.  She was finally decommissioned in 1974 and became the Intrepid Sea-Air-Space museum in 1982. Wandering the ship was definitely a throw-back to the past, and I learned a lot by reading the many exhibits presented on the lower levels. Unfortunately, I visited slightly before the arrival of the Space Shuttle Enterprise, which is now displayed on the deck of the carrier.

My favourite part of the museum experience was the tour of the USS Growler Submarine, docked next to the Intrepid and part of the museum’s entrance fee. The Growler was used as a deterrent by the US Navy, as it was able to patrol under a strict cloak of secrecy and was armed with Regulas sea-to-air missles with nuclear warheads. It patrolled from May 1960 to May 1964 and proved to be a strong deterrent during the first years of the Cold War and Cuban Missile Crisis. The cramped conditions showed how difficult it must have been to live on the submarine and we were told that in the event that a nuclear weapon had been launched from the submarine, it was almost guaranteed that the enemy would find and sink the submarine, killing the crew, within 15 minutes. Because of this, the crew has been greatly regarded for their bravery in serving on the Growler. 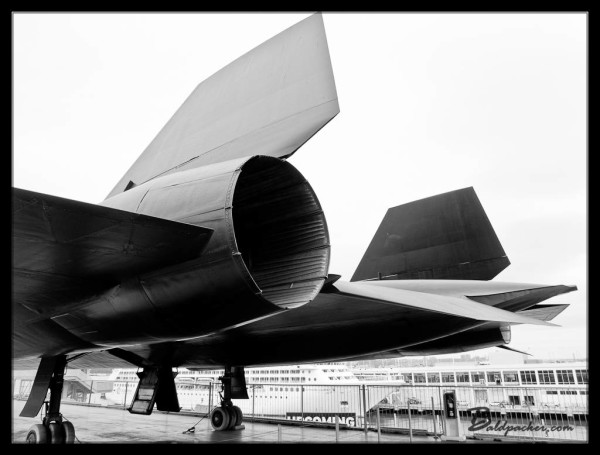 Jet on the USS Intrepid 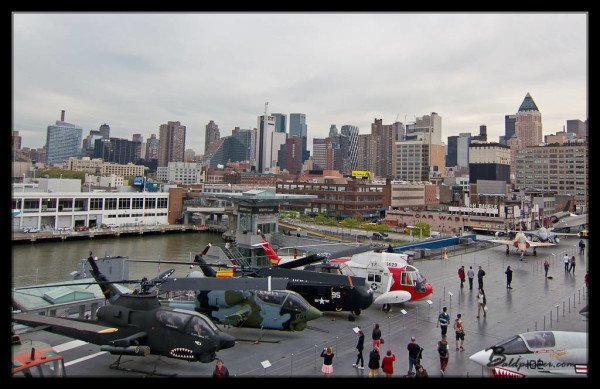 After finishing my tour of the carrier and submarine, it was time for baseball! I hopped on the Subway and followed the Yankees jerseys to the Bronx, where I found Yankee stadium. While we headed to the ticket office to pick up the cheap seats I had purchased online, Michelle saw two tickets laying on the ground. The seats were $60 each and were in a much better section than the ones I had purchased. We asked everyone around us if the tickets belonged to them, and after confirming the owners were long-gone, we picked up my tickets and headed into the stadium. The first inning of the game was action packed and took over 40 minutes to play. From then on, the game dissolved into the typical slow play that I recall not being able to watch on TV. The baseball experience is what you make of it though, and Michelle and I entertained ourselves with stadium dogs and beer. Yankee Stadium was also wonderful to behold, with great views from all of the seats, and huge high-definition video screens to help those of us on the top level follow the play. After the 6 innings, we decided to try our luck and use the better tickets that Michelle had found before the game. The views were certainly much better from Section 209 than upstairs, and I was happy to have been able to experience both the upper deck and mid-level. Michelle had to take off at the top of the eighth to see her family, and I decided to head out soon thereafter. It was a great experience overall, but I’m still not convinced baseball is a sport I will ever follow. 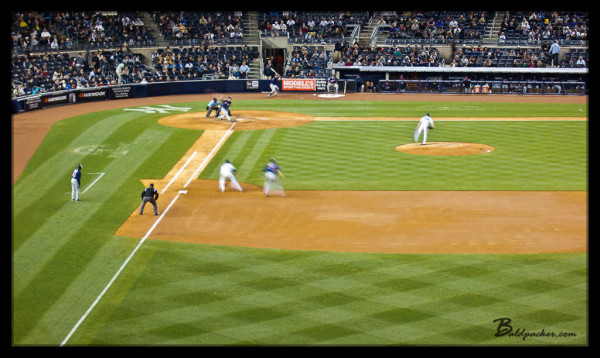 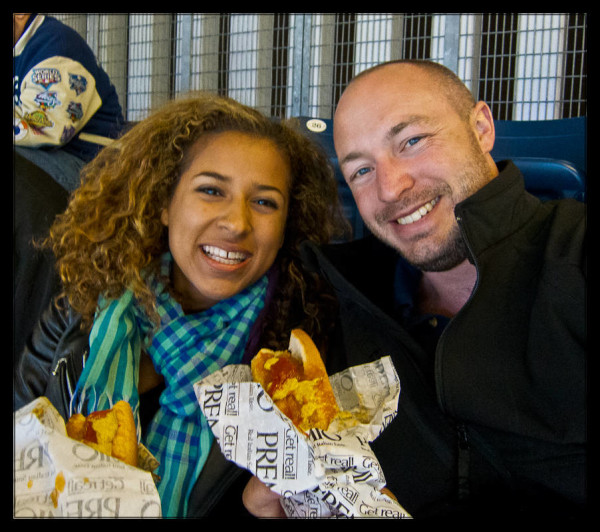 Havin’ a Dog at the Ball Game

I woke up early and re-traced my steps to Newark Aiport, where I flew back to Calgary via Denver. I immediately missed New York and regretted having not visited the city much sooner! For a guy who isn’t usually a fan of big cities, I was amazed at how much I enjoyed myself in the Big Apple. The great experience may have been due to the great weather, seeing Sarah and Michelle, or even the Rangers & Yankees games, but whatever the cause, I certainly plan to return to New York City again soon!