Sadly, our bus from Dubrovnik to Kotor did not take the route that I had hoped, so unfortunately we missed seeing Ostrvo Sveti Dorde off the coast of Perast in Bay of Kotor. For those who have not heard of Sveti Dorde, it is a small natural island that has a 12th century monastery built upon it. Despite the beauty of Sveti Dorde, the thing that makes the area so interesting is that a second island, called Gospaod Škrpjela or “Lady of the Rocks” was artificially built so the Orthodox could also have an island church. The church was taken over by the Roman Catholics and is now called Church of the Lady of the Rocks. 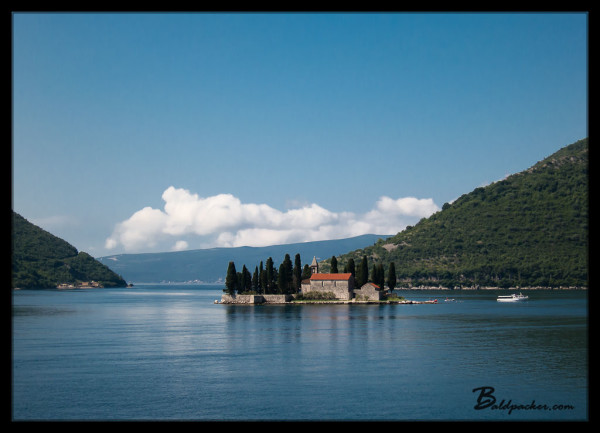 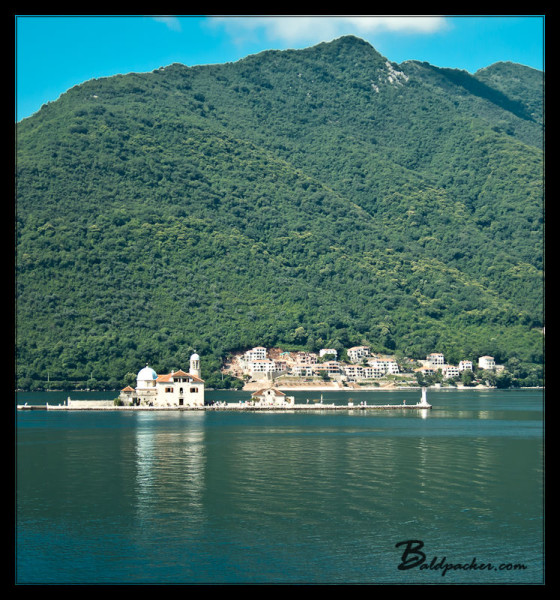 Lady of the Rocks 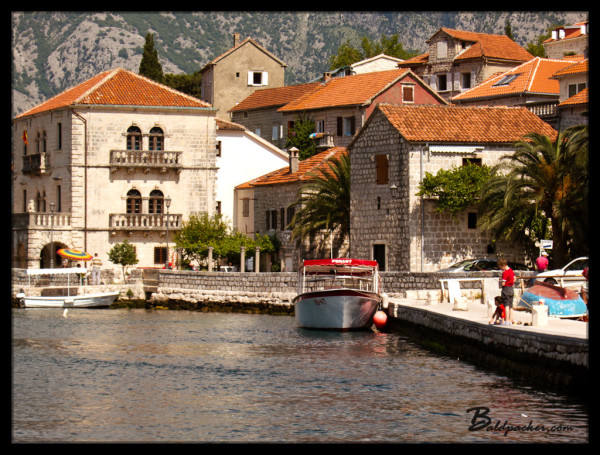 Fortunately, I had been on a previous day trip from Dubrovnik to Kotor that stopped in Perast, but I had hoped that Sara would also be able to enjoy the beautiful scenery and that we’d have time to take a boat ride out to the church. I have read that certain tourist buses from Dubrovnik to Kotor stop in Perast, but as the route takes longer it is likely not that common. This is perhaps something worth researching further for next time as it is definitely a worthwhile stop that I would recommend to others.

Upon arrival in Kotor we found our way to the Old Town Hostel, located in a beautiful historic building right in the heart of Kotor’s old town. I had booked a room in the hostel but as it was clearly high season they actually put us in an apartment across the street. It ends up the apartment actually belonged to one of the hostel receptionists! It was a nice apartment and it felt great to be staying in a top level apartment within the historic city. 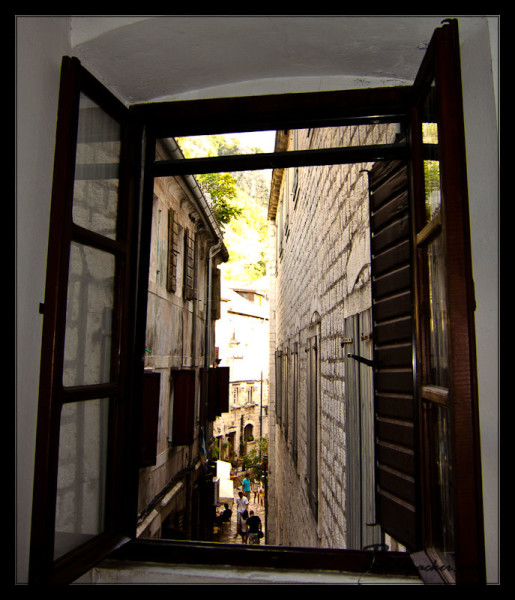 View from our “Hostel” Apartment

After an excellent lunch and a few pivos at one of the many restaurants within the old town, we made our way to the farmer’s market where we were able to purchase fresh grapes, local cheese, and chorizo. Next to the farmer’s market was another market that sold all kinds of interesting wares, including antiques and very old coins. I really wanted to purchase some of the coins as I expect they could be quite valuable, but given I know absolutely nothing about the history of Yugoslavian money, I decided to pass. Looking back, I regret not taking photos of the coins and doing some further research to determine if the coins are rare or of value globally.

I had previously explored Kotor on a day trip from Dubrovnik, however the brief time I had then was solely focused on the old town. Given Sara and I had more time, we set off in search of a beach and swimming. We came across the Baywatch Beach Bar, located right on the rocky beach. It was very busy but Sara and I were able to find a small spot for our beach towels, go swimming, and absorb some sunshine. 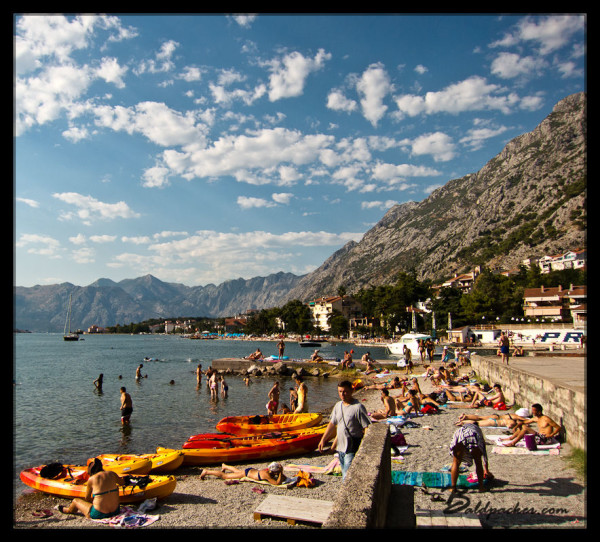 Kotor is located in the Bay of Kotor, a ria (drowned river valley that remains open to the sea) which is often mistakenly called a fjord. Since Kotor is open to the sea, many luxury yachts are moored right off the old town and close to the beach. It is no surprise the wealthy come to visit Kotor as it is an absolutely amazing town. I think of it as a less touristy Dubrovnik, as it has the same beautiful red-roofed stone buildings, sea food restaurants, and is also a UNESCO world heritage site. In many ways, I prefer Kotor to Dubrovnik as the old town feels quieter, less developed, and more true to its natural ways.

The ‘must-do’ activity in Kotor is to climb the steps of the walled mountain behind the old town to gain a bird’s eye view of the city. As it was very hot during the day, we chose to defer this activity to the late afternoon with hopes that the temperature would be cooler. There is a 3€ admission charge to climb the 1350 steps and gate attendants are located at both entrances to the stairs. As Sara and I reached the summit, the sun was just setting behind the mountains and we enjoyed beautiful views of the old town and Bay of Kotor. There are old ruins of a fortress at the summit and we decided it was the perfect spot to sit and enjoy our grapes, cheese, and chorizo purchased earlier. 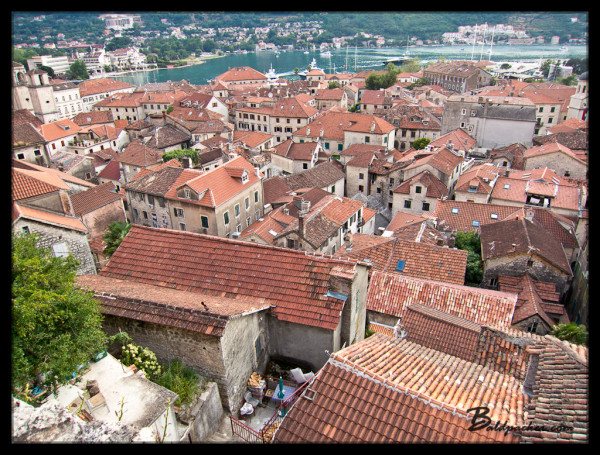 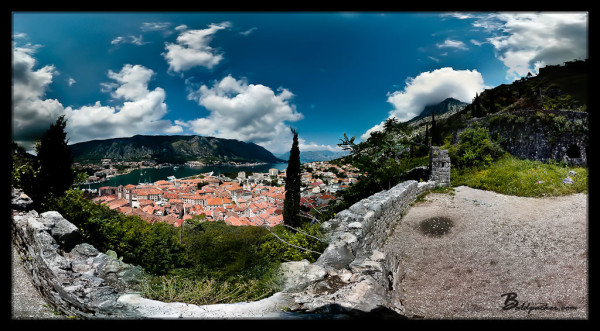 Trail up to Kotor Fortress 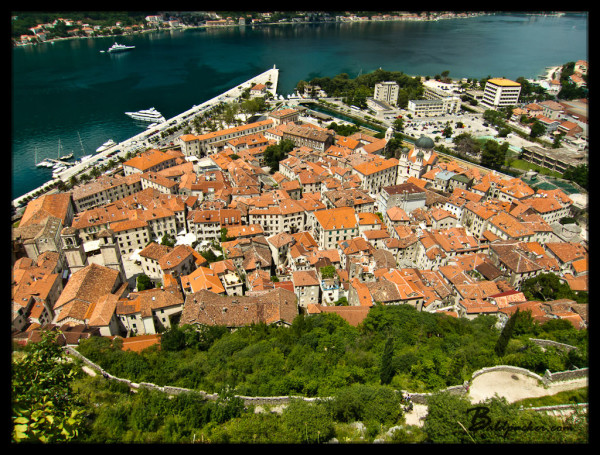 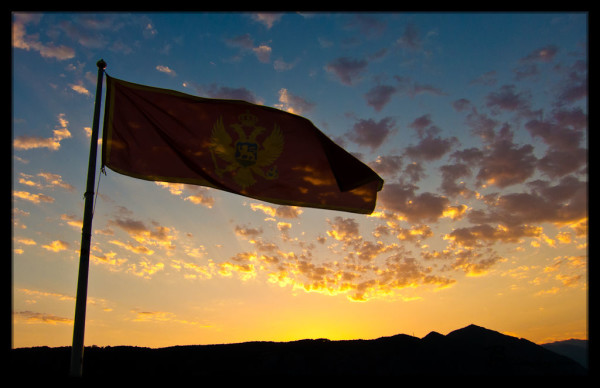 As the sky turned to dusk we started our descent. I was amazed at how many people were making the climb to the top as it became so dark without flashlights. I imagine they were doing this to avoid the 3€ charge but really do not believe it would be worth the cost savings. That said, the stars that were beginning to appear as we reached the beautifully lit old town indicate that star gazing from the summit would be fantastic. 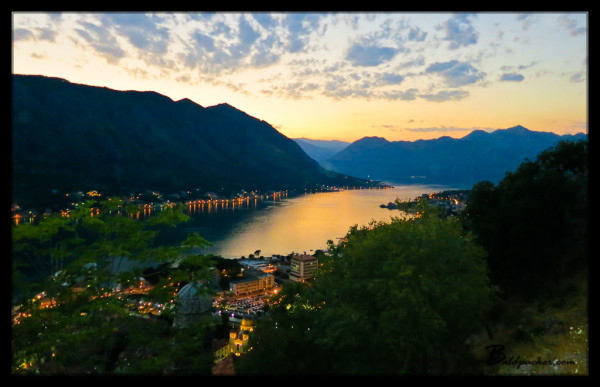 Sunset over Bay of Kotor

Famished from our climb we found ourselves at a restaurant on one of the main tourist strips for a well deservedpivo and dinner. After dinner, we went back to the hostel, which was full of guests. One of the receptionists was passing around bottles of homemade rakija, bottles of which were extremely potent, and the multi-cultural group was getting primed up for a night on the town. Sara and I had a few drinks and enjoyed socializing with the group but had to call it a night as they set off for the clubs given we had an early transfer to Kotor the next morning.

Kotor may be my favourite old town of all my travels to date and I hope to return again for several nights sometime soon. Kotor is just as beautiful as Venice or Dubrovnik but is not yet overloaded with tourists. I don’t expect it will be long before Kotor becomes known for its beauty and charm and the cruise ships and bus loads of foreigners will not be far behind. I’d highly recommend making Kotor a travel priority before that happens!

← Making the Most of Mostar, Bosnia
The Capital of Transylvania: Cluj →