The road into Stirling provided a striking first impression for us, as both the Stirling Castle and Wallace Monument were clearly visible in the hills above. We stayed at the Forth Guest House in Stirling, which was another wonderful B&B run by two very nice older Scots. Following instructions from my good friend Michael, we headed up to the castle after checking in, stopping off at the Settle Inn for a pint on the way. The Settle Inn is a very cozy pub dating back to 1773, making it the oldest bar in Stirling. The oldest curling stones I have ever seen were also on display in the pub and it was a great reminder that it was the Scots who invented curling in the 15th or early 16th century. 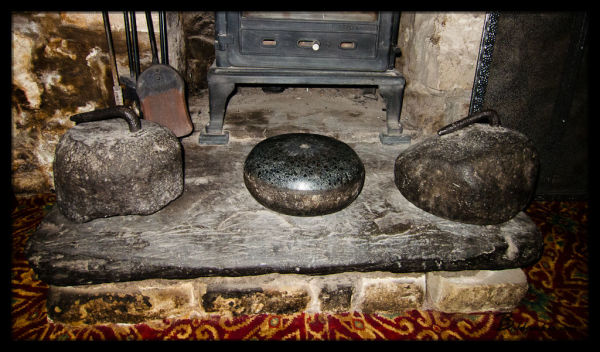 Curling Stones at the Oldest Pub in Stirling

After a delicious and refreshing pint, we climbed up to the castle for a view over the town of Stirling, and then went to the Portcullis Restaurant for dinner. The Portcullis is right below the castle and I thought it provided a wonderful dining experience for its reasonable price. It is usually necessary to make reservations, but we were able to slip in for an early dinner before the reserving party arrived for their table. On Michael’s recommendation, we all tried the Chicken Haggis, and it was definitely the best haggis I have ever tasted (I am sure the Drambuie sauce helped). 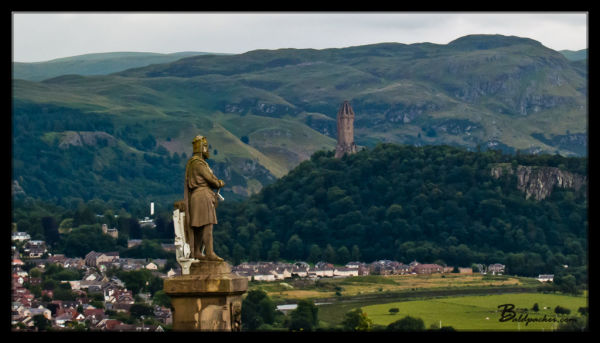 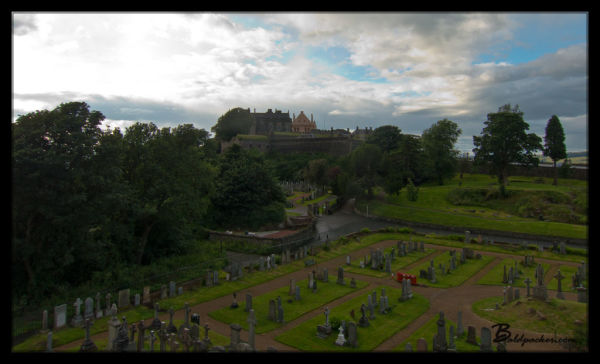 View over Stirling Castle and Cemetary 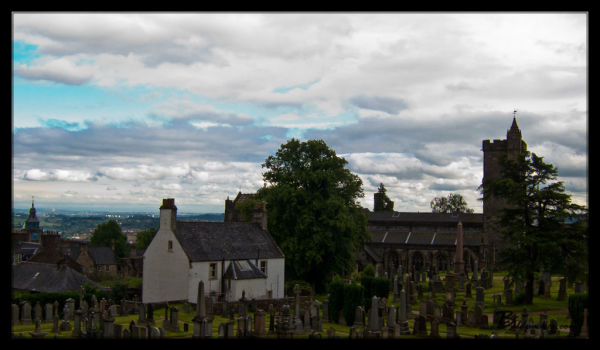 View over Stirling Castle and Cemetary

The breakfast at Forth Guest House was great and provided the perfect start for a day of sightseeing. We set off to see the Wallace Monument first, which is only a short drive out of Stirling on the summit of Abbey Craig. The tower was completed in 1869 after a fundraising drive and a resurgence of Scottish national identity in the 19th century. The tower is 220 feet tall, and is built in a beautiful Victorian Gothic design. It is said that the location of the tower is where Wallace watched the battle of Stirling Bridge, making it an ideal location between Edinburgh and Glasgow for such a monument. It is a beautiful place to learn about the history of William Wallace and Scotland, as well as the battle of Stirling Bridge. To help teach this history, there are numerous educational displays in the Wallace Monument tower providing much needed rest breaks during the 246 step climb to the top. The climb is well worth the effort as there are beautiful views over the Forth Valley available at the top. 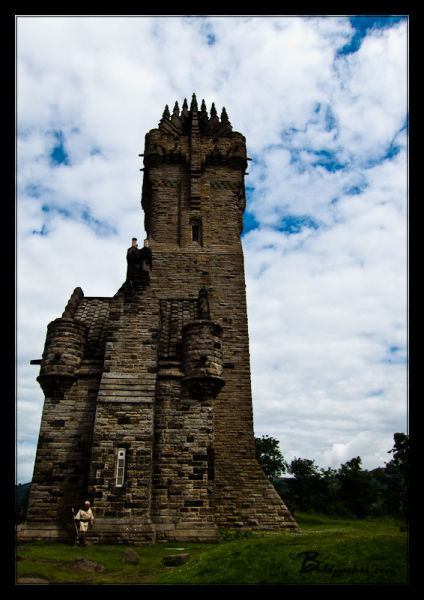 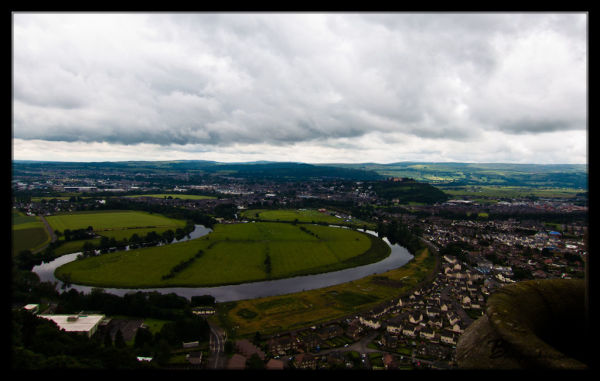 View over the Forth Valley from Wallace Monument

From the Wallace Monument, we drove to the Falkirk Wheel, a giant rotating boat lift that connects the Forth and Clyde Canal with the Union Canal. The Falkirk Wheel is quite touristy, but I love engineering and was very interested in seeing how the wheel functions. The height difference between the two canals is 24 meters, or approximately the height of an eight-storey building. The most amazing part of the engineering, in my opinion, is that they managed to balance the wheel to such a degree that the power to rotate the wheel only takes 1.5 kilowatt-hours of energy, which is roughly the same as the amount of energy required to boil eight kettles of water; an incredible feat of engineering. We took the boat tour, where you actually take a boat on the wheel between the upper and lower canals. The views from the top were fantastic, but I am not sure the attraction is necessarily worth the time and cost depending on your interests. Unless you have an interest in engineering and construction, as I do, or are driving right past Falkirk, it may not be worth the effort to see the Falkirk Wheel even though I personally quite enjoyed it. On the way back to Stirling, we also stopped at a movie museum that featured a lot of 007 props (my favourite being the Aston Martin). That evening, we enjoyed a meal at another Belhaven Best pub in Stirling, the No. 2 on Baker Street. 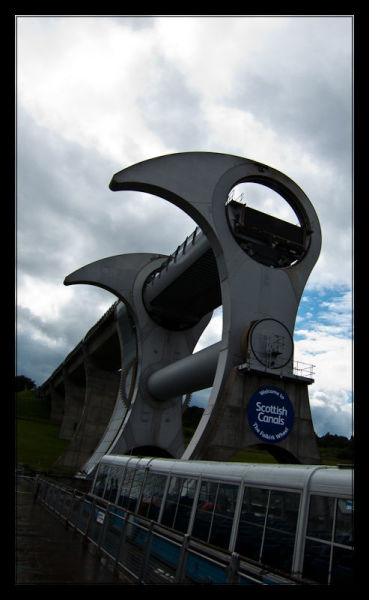 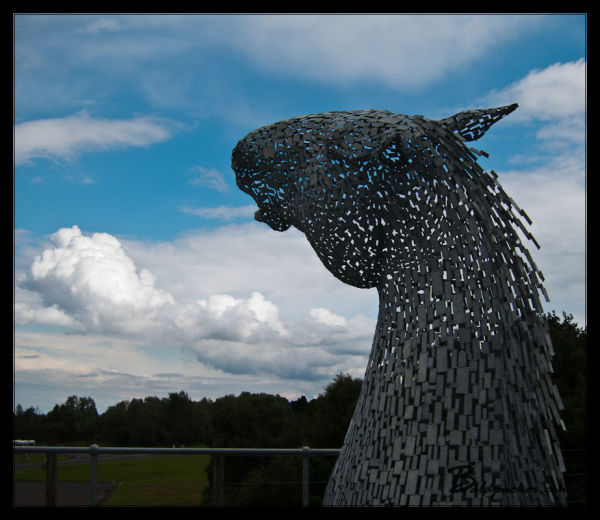 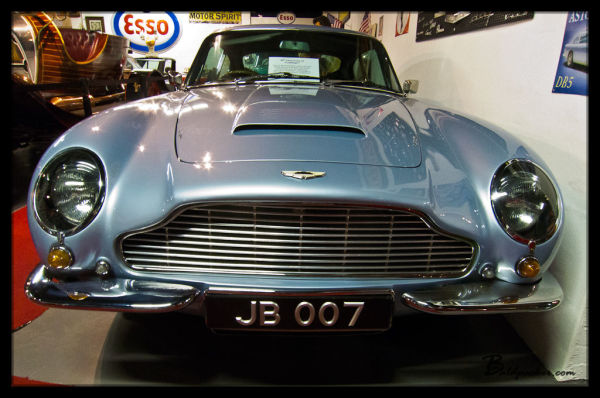 The next morning, after another great full cooked breakfast at the Forth Guesthouse, we headed for the Scone Palace. The Scone Palace was constructed in 1808 by recasting a 16th century palace. The site of the Scone Palace was previously the site of the Scone Abbey, founded by King Alexander I, and often used to house the Scottish Parliament in the 13th and 14th century. The Scone Abbey was also historically the home to the Stone of Scone, also known as the Stone of Destiny. The English often refer to it as the Stone of Coronation, for it was used during the Coronation of both Kings of Scotland and England. Edward I of England took the stone to Westminster Abbey in 1296 as a spoil of war, and to symbolize his claim to rule over Scotland. This created a lot of animosity between the English and Scottish until it was returned to Scotland in 1996. It was last used for a coronation in 1953 when Queen Elizabeth II was crowned monarch. Although the Scone Palace itself is quite new and does not have the mystique of older Scottish castles, the history makes it an interesting area and the grounds and gardens are beautiful making it a worthwhile site to visit. 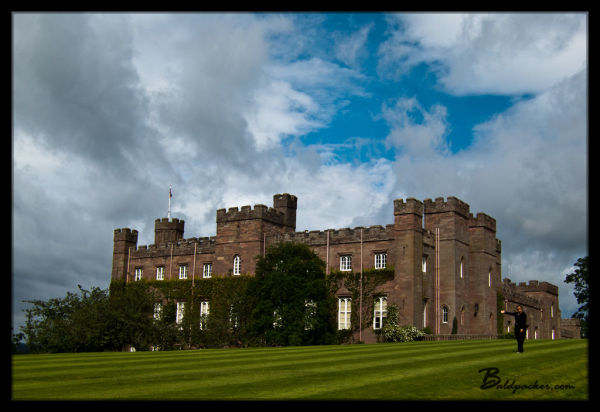 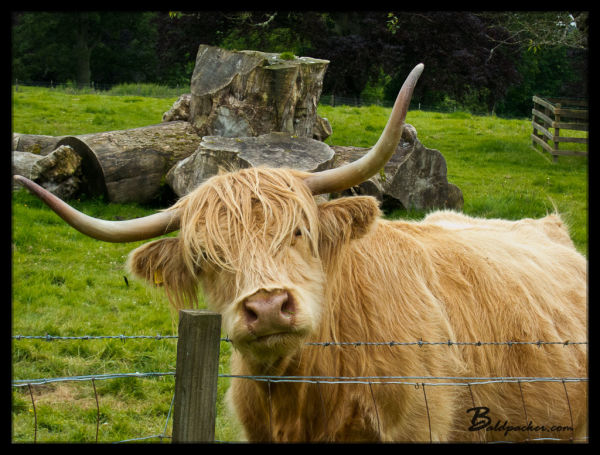 Upon returning to Stirling from the Scone Palace, it was finally time to explore the Stirling Castle. The Stirling Castle is beautifully perched atop a large hill and the views are exceptional from the castle in all directions. The castle is quite large making it a wonderful place to wander around. The adjacent graveyard is also a good place for an evening walk as it has an eerily relaxing atmosphere to it. After exploring the area, we went to another Belhaven Best pub for dinner, this one called Droughty Neebors. The inside of the pub had a cool college bar vibe to it and it is definitely a place I would go again for a drinks night. 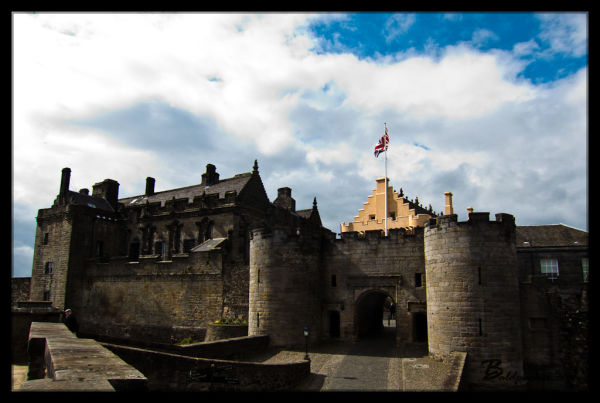 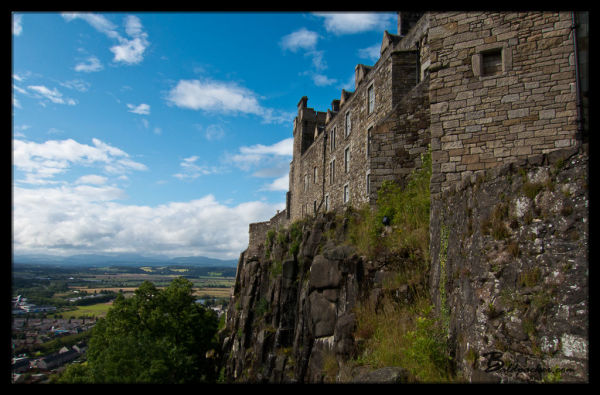 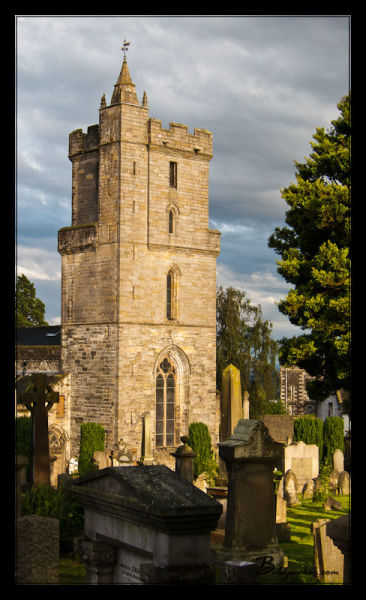 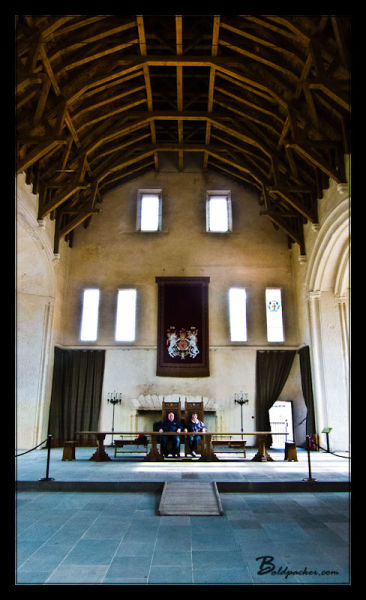 After dinner, my mom and I continued exploring Stirling late into the night, crossing the old bridge where the Battle of Stirling Bridge was held, and continuing on to Cambuskenneth Abbey, founded by David I in 1140. Cambuskenneth is a separate village from Stirling and many of the homes in the area appeared to be people’s cottage retreats. On a previous night, my Mom had managed to find the Abbey Inn, the village’s pub, so we decided to go in for a refreshing drink. We were quickly recognized as foreigners given the rest of the clientele were local villagers, but I did feel welcome. Of course, golf was on the television and I got to chatting with a few of the locals about both golf and oil and gas, which I am sure are common bar stool topics of conversation. The Abbey Inn’s décor was warm and very out-dated (in a fun way) as all of the chairs and cushions were wrapped in red velvet. After the pint, it was ready to return to our B&B and prepare for the next day’s adventure to Edinburgh. 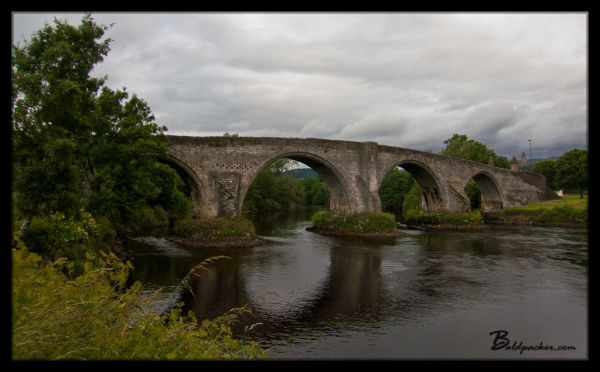