We drove to St. Andrews from Aberdeen and stopped at the Dunnottar Castle on the way. The castle is located about 2 miles (3 kilometers) south of Stonehaven. The buildings are from the 15th and 16th centuries, which is not that early compared to other Scottish castles, but the location is stunning. The name Dunnottar Castle is based on the Gaelic phrase Dun Fhoithear, which means ‘fort on the shelving slope’. It is this shelving slope that makes the castle so spectacular. The castle also has historical significance in that William Wallace was said to lead the Scots to victory over the English at this location in 1296, leading to Wallace’s imprisonment. It is possible to pay and enter the castle, but I would suggest that it is worth just hiking around the area and enjoying the beautiful scenic views of the ruins from the rugged Scottish coast for free. 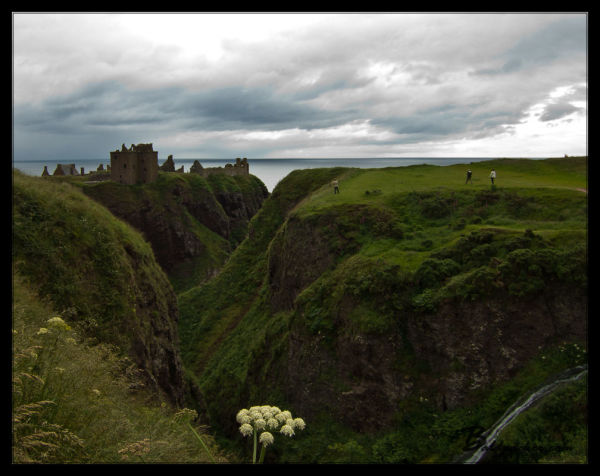 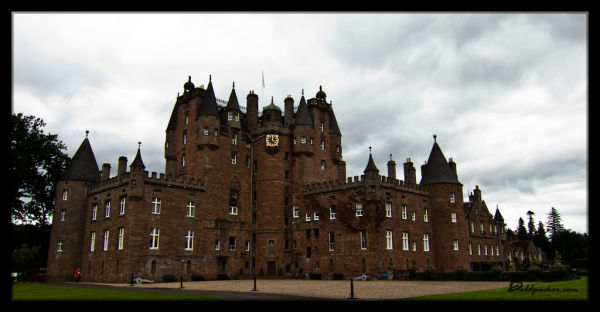 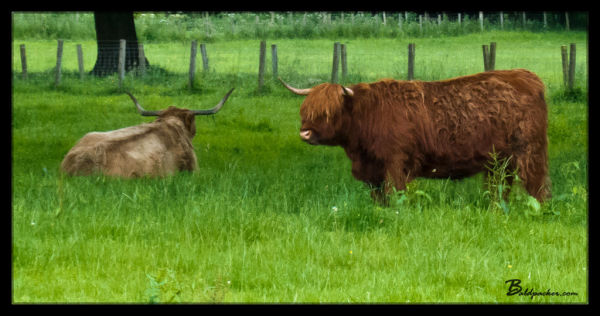 The New Hall is basically dorm style accommodation that is available to tourists in the summer months when there are few students in St. Andrews for classes. St. Andrews is a gorgeous town that is known around the world for several reasons. The primary and most renowned reason is because of the Old Course, one of golf’s oldest courses and considered by many to be the ‘home of golf’. The second reason is the University of St. Andrews, the oldest university in Scotland and the third oldest university in English speaking countries after Oxford and Cambridge. The final reason is the cathedral and castle ruins, which are both steeped in great history.

We arrived in St. Andrews late in the afternoon, and spent our first day in town wandering around the Old Course and around the Cathedral of St Andrew. Because of our late afternoon arrival, the Cathedral was bathed in a beautiful soft sunlight that made the ruins both look spectacular and photograph well. Most of the Cathedral’s remains are those of the ruin’s foundations, dating back to 1158, but are still impressive nearly 900 years later. My favourite part of the Cathedral area relates to golf though, as Old Tom Morris and Young Tom Morris both have a memorial at the site. Old Tom Morris won four Open championships, the last of which was in 1867. He then died in 1905. His son, young Tom, won three consecutive Open titles (1868-1870) but then died on Christmas day in 1875. The golf shop where Old Tom Morris used to sell his handmade clubs is still present right next to the Old course which I found quite impressive! 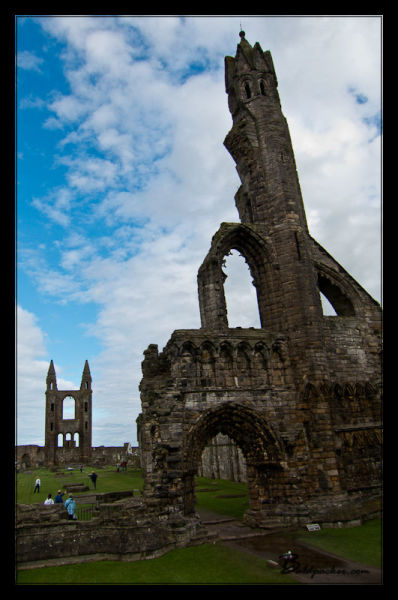 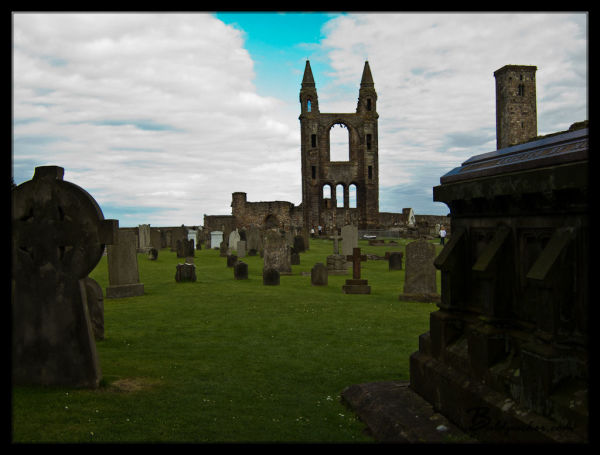 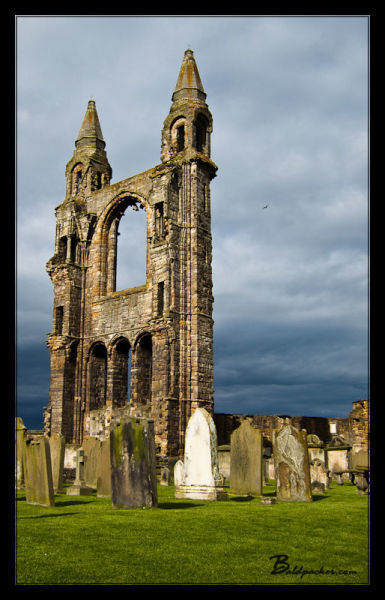 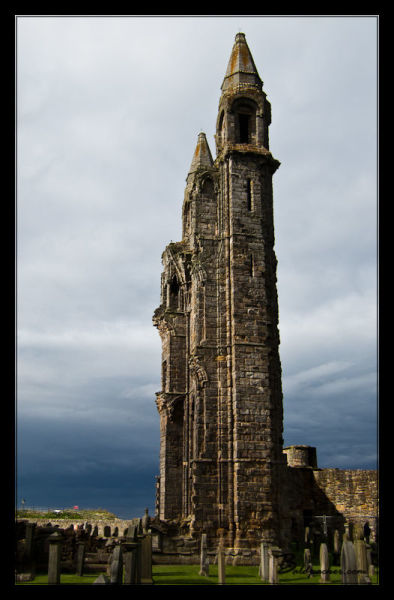 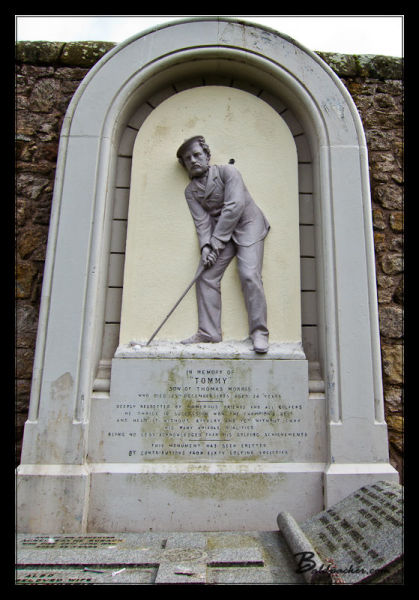 Next to the cathedral and cemetery is the St. Andrews Castle. The St Andrews Castle is not as picturesque as other Scottish castles, but it does have a spectacular history. After the sack of Berwick in 1296 by England’s Edward I, the castle was taken over by England until Scotland’s victory at Bannockburn, where Scotland took control of the castle again. In the 1330s, the English captured the St. Andrews Castle yet again, followed by the Scottish retaking it in 1336. Finally the Scots destroyed the castle in 1337 to ensure the English could not use it as a stronghold again in the future. There was a lot of blood spilled on St Andrews from so many battles and I did have an eerie feeling looking over the ruins and thinking of its complex past.

After all of the sightseeing my parents and I were hungry, so we headed to the Blue Scone Bar for some Belhaven Best beers and good pub food. The Belhaven Best pubs became a favourite of ours throughout Scotland as they had consistently good food, delicious beer, a relaxed atmosphere, and reasonable prices. On the way to the Blue Scone, we passed many beautiful buildings belonging to the University of St Andrews. The university was founded in 1410 and has an impressive history. It is still ranked as the top university in Scotland and one of the top universities in the UK, and it is certainly one of the most beautiful universities I have seen in my travels.

After a great sleep at the New Hall, we headed back to the St Andrews golf course to tour the British Golf Museum located nearby. Apparently, golf was first played at St. Andrews in the early 1400s until James II of Scotland banned golf in 1457 because he thought men were practicing more golf than archery. In 1502, King James IV lifted the ban once he became a golfer himself. Golf remains a huge sport in Scotland and most locals are able to play for very reasonable rates compared to North American standards. Many children also learn how to golf in grade school, which may be partly why Scotland has so many professional golfers relative to the country’s population.

The British Golf Museum is excellent for golf enthusiasts and it taught me a lot about the history of golf and the development of golf equipment. Incredibly, golf balls used to be leather balls painstakingly filled with feathers, making the sport only available to the wealthy until cheaper golf ball construction methods were adopted. It was also amazing to see the development of golf clubs and how they slowly became the woods, irons and wedges that we are used to today. Many clubs of years past look more like garden tools than modern golf clubs! After the British Golf Museum, we managed to time the 11am tour of the Old Course for a cost of only £2.50. I would highly recommend this tour to anyone as it is incredibly informative and of great value. 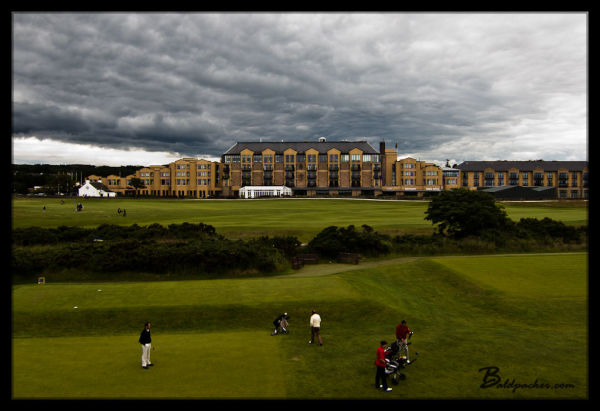 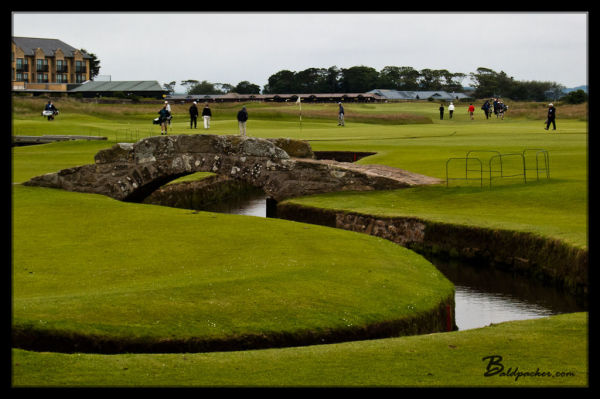 The Old Course was great to see and it provided me with the opportunity to learn a lot about both golf and Scotland. The beautiful thing about Scotland is that people are allowed to walk across properties as though they were public, as long as they respect the property’s rules (closing gates and such). Therefore, it is actually possible to walk around the Old Course as a tourist, even if you are not golfing. Clearly, you do not want to get hit by a golf ball or distract the golfers paying £150 for their round, but I did take advantage of the openness of the course to get a photo on the 18th hole (nick-named the ‘Old Tom Morris’) Swilcan bridge. This bridge is familiar to those who have watched golf tournaments at St. Andrews as those expected to win the tournament pose for photos while walking to the 18th green. I tried my best to strike Jack Nicklaus’ pose from when he walked over the bridge in 2005, at what was his last British Open.

After learning all I possibly could about golf in the time available, it was time for us to head to Stirling. St. Andrews is a great town and I definitely hope to return one day to play the Old Course.