Top Things to do on a Reykjavik Stopover

Booking a Stopover in Iceland

Flying Icelandair is a great way to travel between North America and Europe. Their prices are competitive and you can book a stopover in Iceland for up to seven nights at no additional cost! In my case, I found cheap flights from Dusseldorf to Reykjavik with Lufthansa and then from Reykjavik to Berlin with Air Berlin so I made Iceland my transit destination even though I was only traveling between two cities in Germany.

My total stopover in Iceland was for 5 days / 6 nights in August 2012. I spent three of those days exploring Reykjavik and I found many awesome things to do which I describe further below.

Reykjavik’s Keflavik International Airport is around 50km SW of Reykjavik so, unless you are planning to rent a car from the airport, I would highly recommend using one of the bus transfer companies.

I booked my transfer in advance with Grayline for ~US $20. I arrived late at night and even there still appeared to be tourist information and travel desks still open I would recommend arranging your transfer ahead of time as taxis are very expensive. 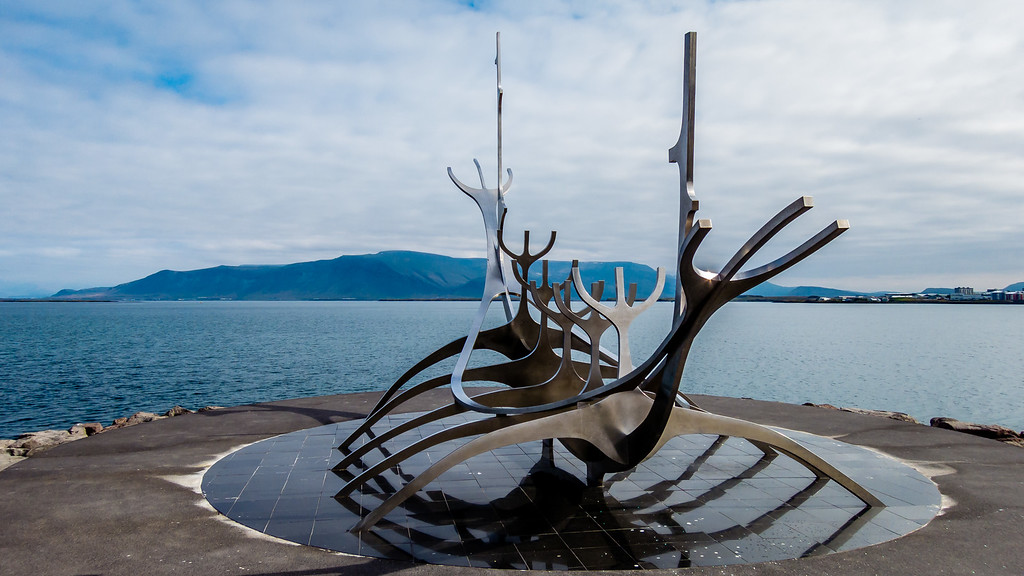 Kex Hostel is one of my favourite hostels in the world and I cannot wait to return. It is a wonderful multi-functional property that, in addition to all types of rooms including single, family, and dorm rooms, offers a bar, restaurant, travel agency, and sometimes even live music.

Kex is in a great location and I understand that it had been a biscuit factory prior to being converted to a hostel. When I was there in 2012, the “Kex Hostel” sign was very small and that made the hostel hard to find. Hopefully they’ve improved this but I’d look it up on a map before you arrive just in case. There is a Domino’s pizza next door to the hostel which is both a good landmark and a cheap place for food if you’re on a budget.

Since I wanted to save money on accommodation for food and tours I stayed in the 16 bed mixed dorm for 3200 ISK (US $28) per night. The dorm was big, organized, and divided into two sections so I didn’t have problems sleeping, though I’d still recommend bringing ear plugs for the bigger dorms. I did see many other older couples and other families at the hostel so it is likely a good place to stay for all types of travelers.

Best Things to See and Do in Reykjavik

Although Iceland is more known for its nature than cities, Reykjavik should not be missed. As the capital of Iceland, Greater Reykjavik hosts 200,000 people or 60% of Iceland’s population. The Greater Reykjavik area actually consists of seven separate municipalities, but Reykjavik is the largest with over 120,000 people and will likely be the place you to explore the most.

My first day in Reykjavik was a holiday Monday and I spent most of the day wandering around the city getting a feel for my surroundings. Unfortunately, because of the holiday, many shops were closed but thankfully, coffee shops were still open so users like me could get their caffeine fix.

Coffee shops are an institution in Iceland. Icelanders are ranked 4th in the world in coffee consumption with almost 9 kils (over 20 pounds) of coffee beans consumed per person per year. That’s more consumption per capita than the UK and France combined!

You won’t see large coffee shop chains in Iceland and that means there are great independent coffee shops who really compete to serve amazing coffee. Most shops roast their own beans or buy them directly from Iceland’s two major roasters / distributors and many even offer free refills.

Reykjavik features beautiful sculptures , buildings, and scenery and many of my favourite views are along the waterfront.

If you walk the waterfront on Reykjavik’s north, you will see the Sun Voyager sculpture and the beautifully modern architecture of the Harpa concert hall and conference center. Harpa’s southern facade creates kaleidoscopic reflections that are apparently intended to mimic the crystallized basalt columns found in Iceland. 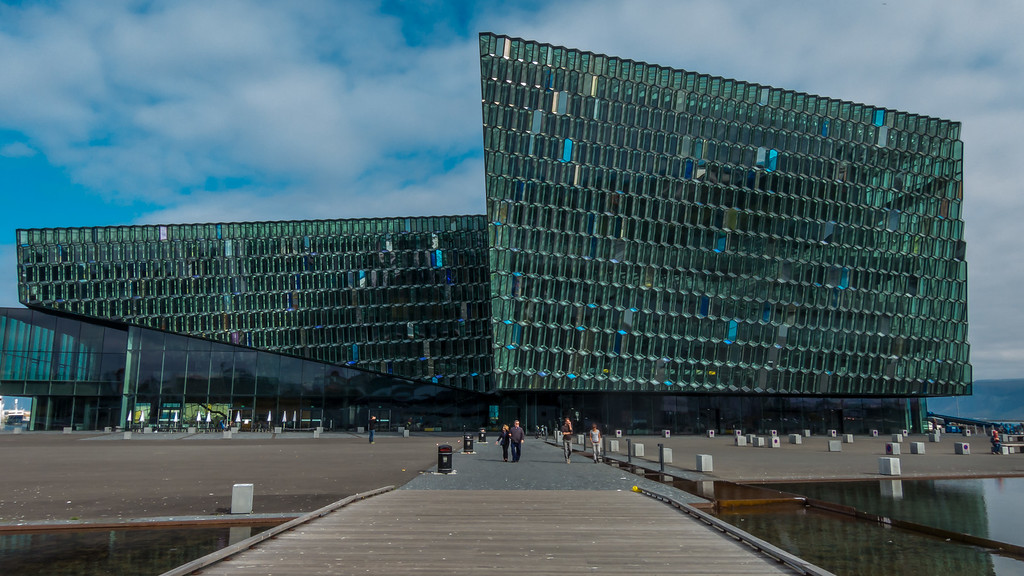 If you are up for a longer walk, you can continue west from Harpa to the Grótta island lighthouse. The lighthouse is on the western end of Reykjavik’s peninsula and is only accessible from the mainland at low tide.

I walked to the Grotta from the Nauthólsvík Geothermal Beach (discussed below) in Reykjavik’s SW before continuing east back to Kex Hostel, essentially making a massive 18km loop around Reykjavik. It was a very long walk but there were nice pathways along the ocean and it would also be a great path to run or bike if you want to exercise. 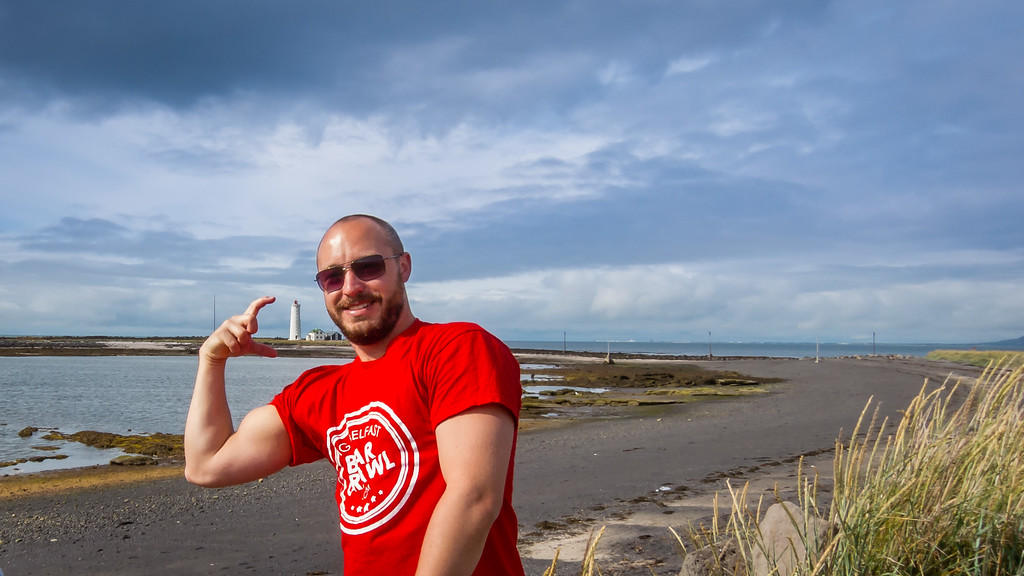 “The Grotto Lighthouse is Thatta Way”

The Hallgrimskirkja church literally can’t be missed. The church’s 73 meter (244 ft) tower sits atop a hill in downtown Reyjkavik on Skólavörðustígur street, one of the most attractive and popular streets in Reykjavik for tourists. It is the largest church in Iceland and serves as an excellent landmark when exploring Reykjavik since it reaches so high about Reykjavik’s low skyline.

The church was designed to resemble basalt lava flows and took 41 years to build, reaching completion in 1986.

Visitors can pay to take a lift up to a viewing deck which offers views over Reykjavik and the surrounding ocean and mountains, something I unfortunately did not know when I was there! 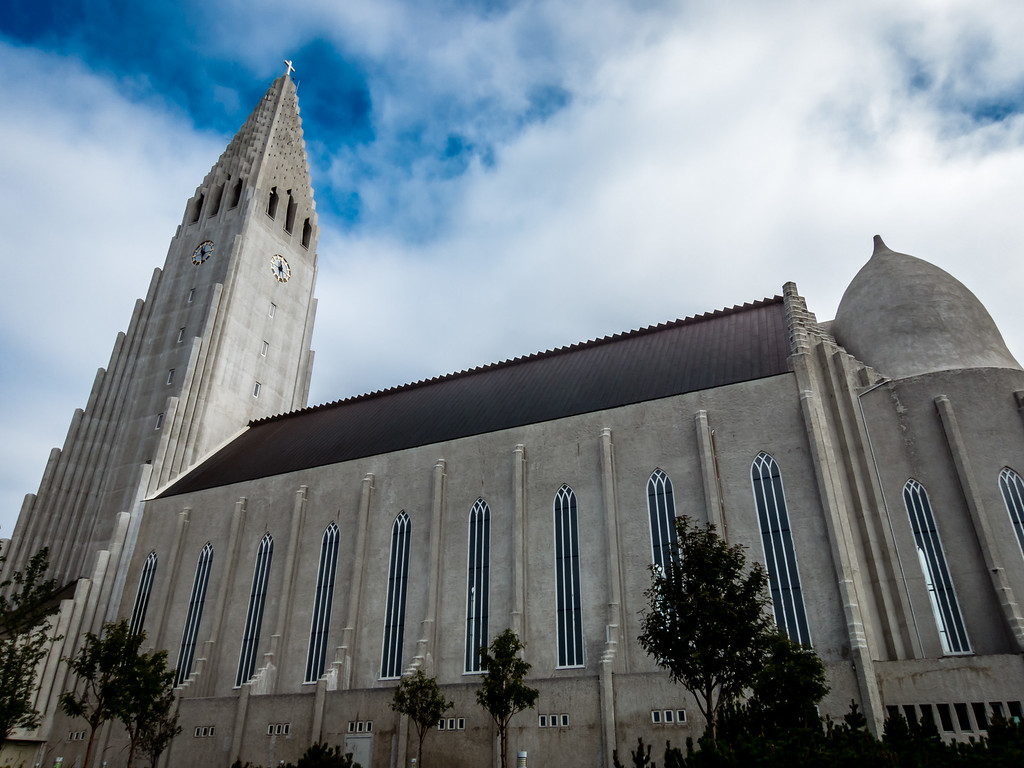 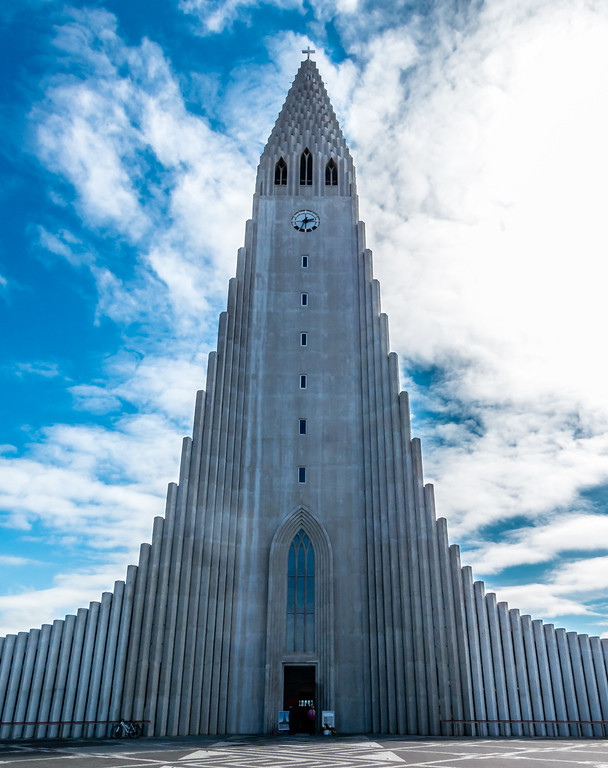 In front of the church is a statue of Leif Erikson. Leif was an Icelandic explorer who is widely believed to have discovered North America in 1001 AD, nearly 500 years before Christopher Columbus. Leif was also the son of Erik the Red, a famous Norwegian Viking who was banished from Norway and later exiled from Iceland for manslaughter and murder. The US donated the statue to Iceland in 1932 to commemorate the 1000th anniversary of Iceland’s parliament, the Alþingi (or Althingi in English), one of the oldest parliaments in the world.

The Icelandic Phallological Museum has the world’s largest display of penises and penile parts and has the motto “it’s not for pussies”. I get bored of churches and art museums so I actually found the Phallological museum quite unique and fun.

The museum hosts a collection has 280 “specimens” from 93 animal species. The largest exhibit is the tip of a blue whale’s penis which measures 1.7 meters and weighs 150 pounds. Apparently a blue whale’s full organ is 5 meters long and would weigh almost 1000 pounds – crazy!

There were many other interesting and funny displays but two displays ‘stick out’ as the most memorable to me. The first was a display of fifteen silver painted sculptures based on the casts of the penises of the Olympic silver medalist (Beijing, 2008) Icelandic handball team. Luckily for the shortest ‘member’ of the team the casts were not individually labeled. Ha! Aren’t I punny?

The other display worth mentioning is the human penis in the collection. A 95 year old man who was apparently a womanizer in his youth donated his penis to the museum. Unfortunately, the surgery did not go as planned and now it is just a shriveled gray mass sitting in formaldehyde. They’re hoping to learn from that removal operation and get a “younger and bigger” specimen soon.

I met a friendly local at the Kex Hostel on a live music night and she recommended I check out the Nauthólsvík geothermal beach. You are unlikely to find this hot pool recommended in other tourist guides, but that’s why my blog is worth reading!

I actually consider the Nauthólsvík thermal pool better than the Blue Lagoon since it is closer to Reykjavik’s downtown and offers an authentic experience where you may actually meet local Icelanders.

The Nauthólsvík geothermal pools are located on Reykjavik’s north, next to the small domestic airport, which can make it somewhat difficult to access since there are fences surrounding the airport facility. Map out a route on Google Maps ahead of time as it took us a while to find a path around the airport to the beach. If you are with a group of people it may even be worth taking a short taxi.

Once we arrived to the beach area we were treated to free access to the change rooms, washrooms, and hot pools. Apparently in the winter there is an admission of 500 ISK but it was free for us given it was still summer when we visited.

The geothermal beach was built in 2001 and, in addition to the hot pools, the area includes a small sandy beach and shallow  salt-water lagoon. The overflow from the geothermal pools mix with the ocean’s sea water and it creates an area warm enough for swimming. After soaking in the geothermal pool for some time I went for a dip in the lagoon and must admit that it was extremely refreshing (i.e. cold) despite being mixed with geothermal waters.

Food and drinks are generally very expensive in Iceland but there are apparently fantastic restaurants serving unique and delicious local dishes if you’re willing to pay for them. I say apparently because I ate dinner at Kex’s gastropub most evenings. I found Kex offered well-priced yet delicious food and it was a fun and social place to meet people – perfect for me as a solo traveler.

The beers at Kex seemed cheaper than elsewhere in Reykjavik and I met several locals who came to Kex for pre-game drinks before heading out on the town. Beer is expensive due to Iceland’s high alcohol taxes but, given beer was banned in Iceland until March 1st, 1989, I was just happy beer was available. Due to the high cost of partying in Reykjavik I rarely went out but I did have a couple of fun nights on the town.

My most memorable night out was at The English Pub which had a casual crowd, live music, and a ‘wheel-of-fortune’ that I paid to spin several times. The cost of a spin was more than a pint of beer, but over the course of the evening we managed to win a couple of pitchers. I suspect we only broke even on the wheel cost-wise but we definitely had a great time gambling for drinks.

I hear that more and more local craft beers are now available in Iceland and I would love to return on Iceland’s National Beer Day (March 1st) to raise a pint and celebrate legalization of beer in the country.

I’ve written about the Blue Lagoon as a separate topic since it is actually closer to the airport than it is to Reykjavik.

The Blue Lagoon is a world renowned attraction and was one of my ‘must-see’ destinations, but after visiting, I’m not really sure why it’s so popular.

The Blue Lagoon definitely targets tourists rather than locals and I didn’t meet a single Icelander while I was there, though given how busy it was I’m sure there were a few. Given the whopping entrance price of 50€ in the Summer months (discounted tickets available online), I suspect most locals go to cheaper geothermal baths such as the free Nauthólsvík pool I recommended above. 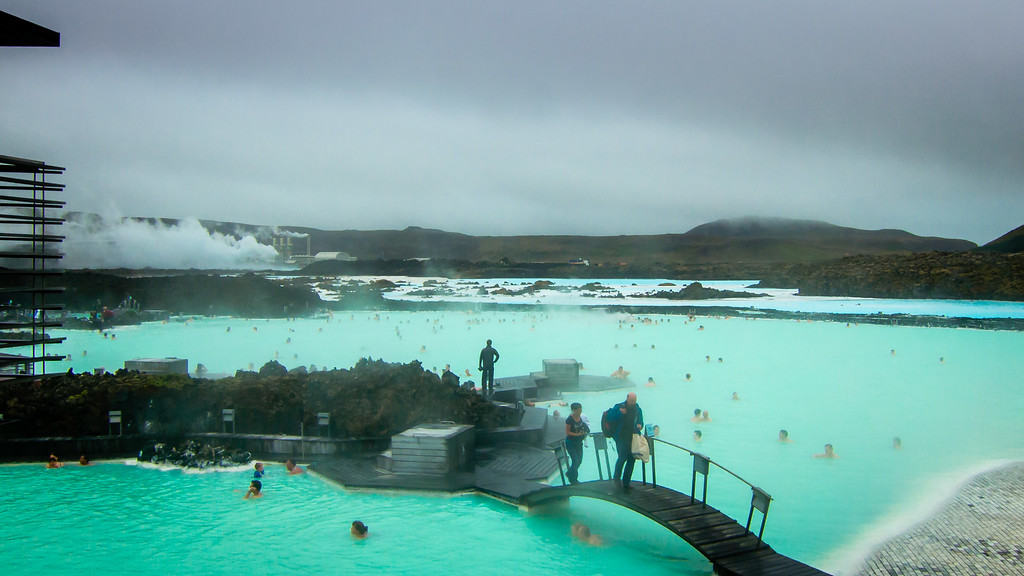 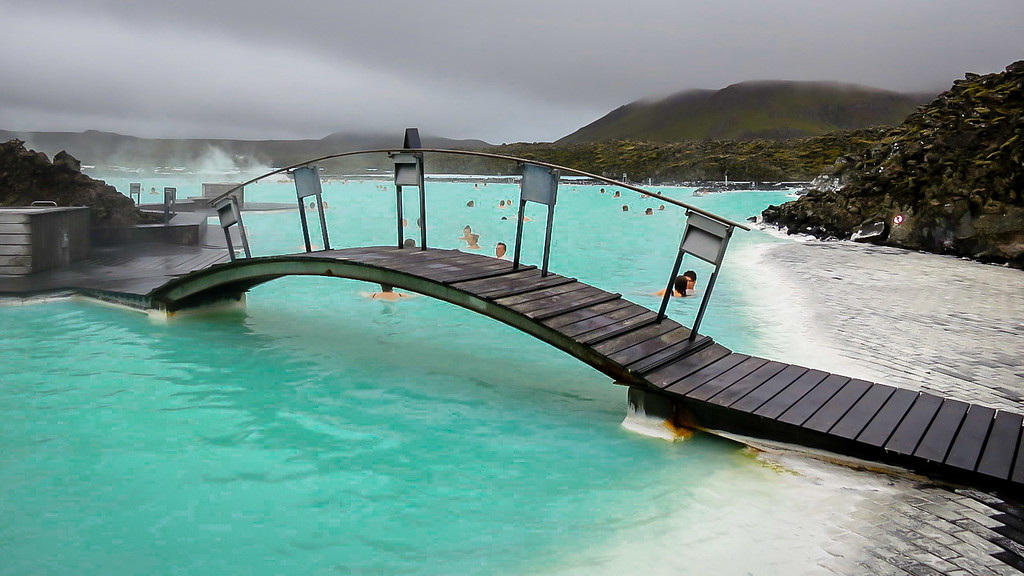 If you have an afternoon or early evening departure flight my suggestion is to book an airport transfer that includes time at the Blue Lagoon since there are storage lockers available. If your flight time doesn’t make a visit to the Blue Lagoon convenient, I wouldn’t personally spend the time or money to visit.