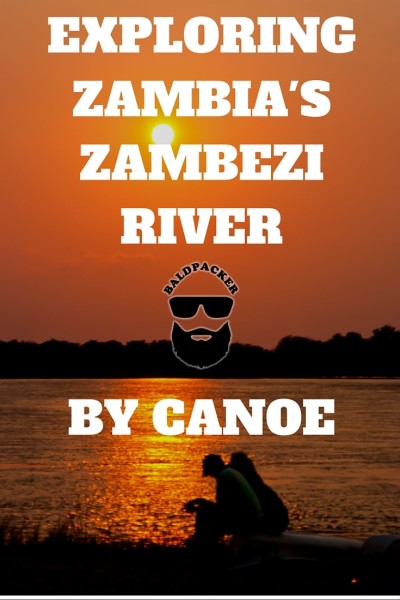 I visited Zambia back in August 2007 on a Drifters “Southern Circle” overland tour. We drove from Victoria Falls, Zimbabwe through Southern Zambia and the Lower Zambezi valley to Kafue, where we camped for the night. Our mission was a three day canoe trip down the Zambezi River which ended up as a fun but difficult failure.

The drive to Kafue was beautiful and educational. I saw the rural mud and grass huts most families lived in and began to understand the tough farming and living conditions they faced. 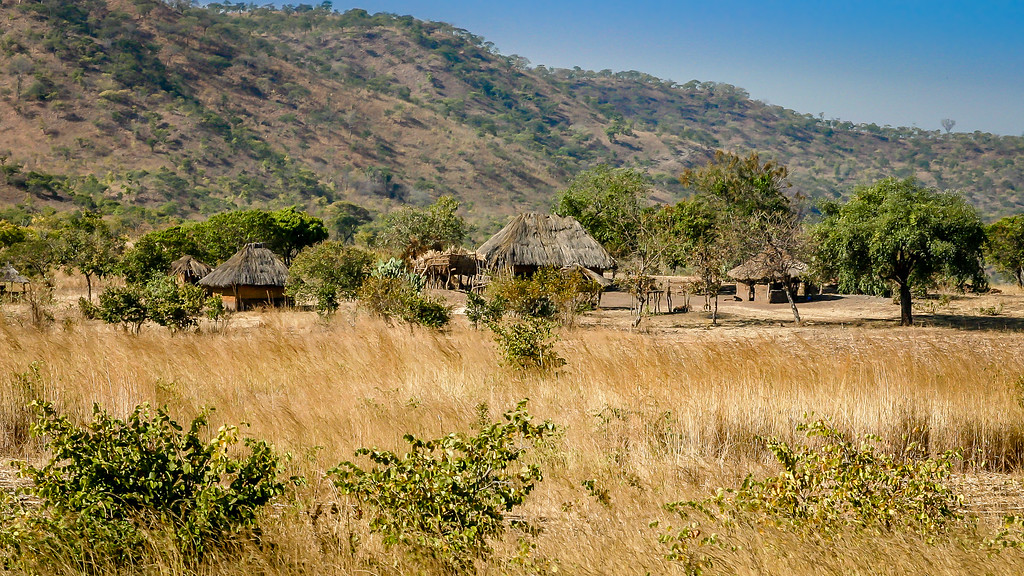 Child with Mortar and Pestle in Zambian Village

Loading our large overland truck on to the small ferry that crossed the Kafue River was also an adventure, but we were rewarded with a spectacular sunset over the river after arriving at our campsite near Kafue.

Sunset over the Kafue River

After camping on the Kafue River for a night, we set out on an epic 3-day canoe adventure down the Zambezi River. The Zambezi River is 2,574 kms long and flows from the Democratic Republic of Congo, through Zambia, over Victoria Falls in Zimbabwe, and into the Indian Ocean through Mozambique. It is the largest African river that flows into the Indian Ocean and the fourth largest river in Africa making it seem like a great place to canoe.

Surprisingly, the most dangerous animal in Africa is the hippopotamus, which is Greek for “river horse”. The reason hippos are so dangerous is they are very unpredictable. We were told to canoe single file because if a Hippo felt surrounded it may decide to flip the canoes over and kill everyone inside. Although we saw Hippos, our group managed to stay in a single file and no one was flipped over or killed. So far, so good.

Danger!!! Hippo in the Zambezi

The problem with the Zambezi is that the river is often so wide that it acts more like a lake than a river. On the afternoon of our first day the wind picked up and brought large waves and white caps with it.

Since I’m a Canadian with canoeing experience I was partnered with a Brazilian girl who had never been in a canoe before. Even though I am quite capable in a canoe, even I struggled to keep us pointed in the right direction against the wind and waves. Canoe pairs with less experience fared even worse and often looked at risk of capsizing. Our guide quickly decided the risk was too high and that we would seek a place to set-up shelter and camp for the night.

Before reaching our campsite, I saw a herd of elephants on the shore. Knowing my Brazilian canoe partner was afraid of being too close to the wildlife I steered us as close to the shore as possible. Being so close to the monstrous elephants definitely freaked Ana out and I chuckled at seeing her squirm. She clearly wanted to yell at me but was too afraid the elephants would react. The best way to conquer fears is to confront them, right?

After reaching shore we set up camp, enjoyed a dinner cooked on open fire, and watched the sunset.

Before tucking in for the night, I heard a shriek and saw a guy from our group practically falling over himself as he ran into camp. He had been peeing on a small mound when a hippo suddenly appeared behind the mound, only meters away from him. Knowing how unpredictable Hippos are he quickly zipped up and ran.

The hippo incident was a stark reminder that there were no fences between our tents and the wildlife and that a hungry leopard could easily come into our camp during the night. I don’t think anyone else peed until the next morning… 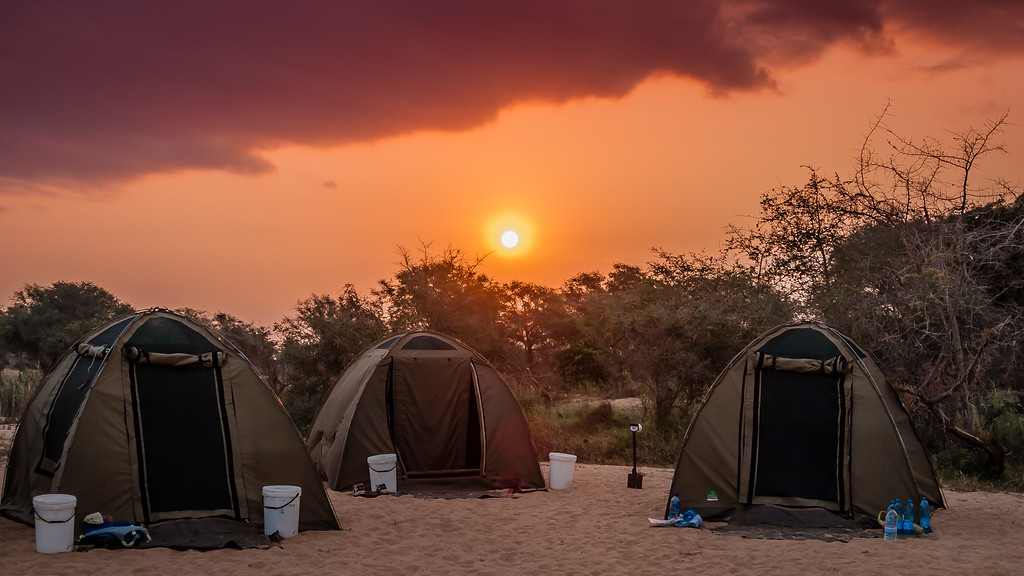 Sunset over our Camp in the Wild

We awoke the next morning to heavy winds and expected another day of tough river conditions. Rather than take the risk of someone capsizing, our guide radioed for a motorboat to rescue us.

Despite the winds, our campsite was relatively sheltered and it was nice to relax on the sandy shore while awaiting our rescue boat.

Takin’ it Easy, on the Zambezi

While relaxing, a group of women and children arrived from a nearby village to do laundry in the river. They seemed amused by a group of foreign tourists stranded on the riverbank and spontaneously decided to put on a song, dance, and athletics show. It was not a tourist trap and they were not expecting any money from us but rather just wanted to have a good time. The women sang and danced and I played games with the kids.

A particularly fun activity was holding a stick that the kids high jumped over, hurdle style. At the time I was 24 and had previously played basketball and competed in track and field events. I couldn’t believe the natural athleticism of the shoe-less kids as they handily out-jumped me! 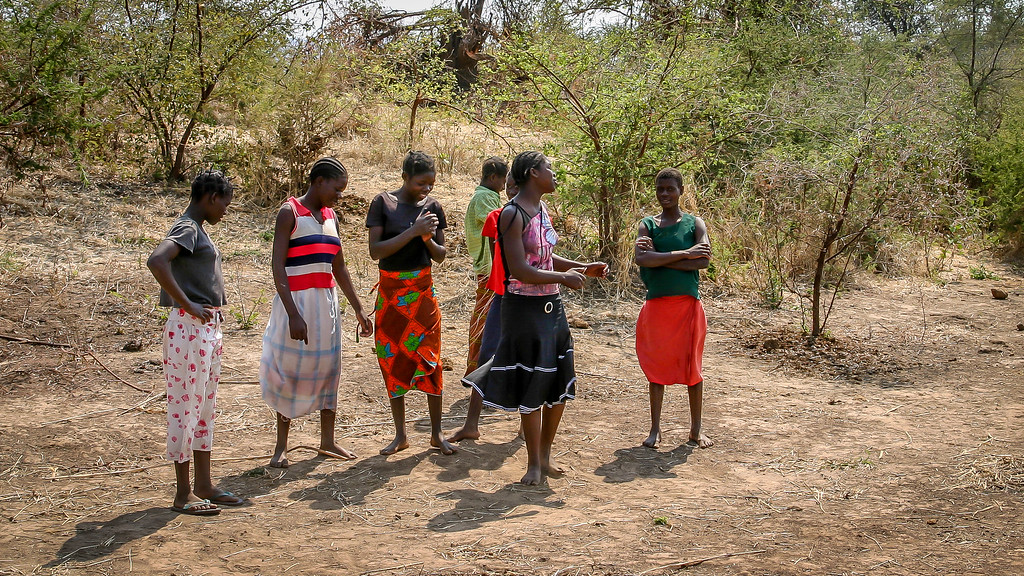 After an hour of fun the women got started on their laundry and our rescue boat arrived to tow us back to Kafue.

Although our three day canoe trip was shortened to two days, no one capsized or was killed by the wildlife so I guess it can be considered a successful trip.